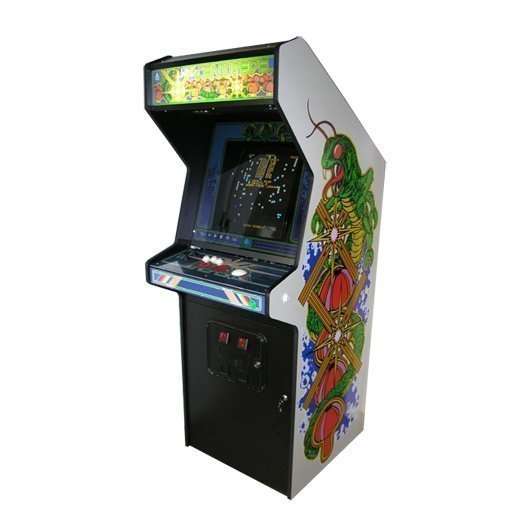 In my thirty-three years I’ve been many things. I’ve been a husband, a father, a student, a banker, an insurance agent, a pizza delivery guy, I’ve even flirted with being a rock star. As the years have gone by, I’ve worn many labels and enjoyed just as many hobbies. A lot of these interests have come and gone over time. But one thing has remained constant since I was a young kid: I’ve been a gamer.

I remember the first time I played a video game. My parents took me to the local Pizza Hut. I was probably no more than six years old. There we were, standing at the counter. when I turned around to find myself face-to-face with a giant, glowing Centipede machine. The controls were simple; roll a big red ball, press the button as fast as you can, and try to shoot the centipede in a field filled with mushrooms.

I was enthralled. It was simply fantastic. There were blinking lights, beeps and bloops, bright colors – it was sheer magic! The machine was adorned with the painting of a menacing cartoon centipede poised to strike at some unknown victim… From that first quarter down the coin slot, I was hooked.

It wasn’t too long after that I encountered other arcade machines; Asteroids, Galaxian, Pac-Man, Q-bert, Frogger, Donkey Kong. I found all of them to be interesting to some extent. But nothing had tickled my fancy quite like the first time I saw that Centipede machine.

Although I can’t claim to remember, I’m pretty sure I begged my parents to eat out at Pizza Hut every night just so I could play Centipede. Eventually, I assume they figured they could save some money by finding a way for me to play it at home, and for Christmas that year, I got an Atari 2600. Complete with a Centipede cart.

The Atari version did not satisfy me the same way the arcade machine did. The Atari 2600 was not as powerful as most arcade cabinets. The graphics were much less colorful. Comparing art of the Atari version of Pac-Man to the arcade machine will make that clear in an instant. Regardless, for the next couple of years the Atari 2600 was what I gamed on. I had all the classics: Pitfall, Moon Patrol, Donkey Kong, Asteroids, all of which suffered in quality compared to their arcade counterparts. I’ve included two pictures below as an example:

Just not the same is it?

For a year or more, I was content in my little bubble of watered-down Atari games.It wasn’t until one fateful trip to the local 7-Eleven with my father that I realized there was something better. It was there, Slurpee in hand, that I first laid eyes on a Super Mario Bros. arcade machine. Everything from the graphics to the sound were revolutionary. My dad handed me a quarter and I plunged head-first into the Mushroom Kingdom. Of course, I was clueless. I didn’t make it past the first Goomba. I had no idea you were supposed to jump over it, or better yet, on it. But it didn’t take long to figure out the game’s mechanics.

I recall going to school the next day and telling my friends about it.  “He had a a mustache. You could REALLY see that he had a mustache! It looked almost as good as a cartoon!” I was completely obsessed with it. I remember drawing pictures of Mario and Koopa Turtles on notebook paper and cutting them out like paper dolls and acting out scenes I had seen from the game. Mario Fever was real and I had it bad.

One day I was in Toys R Us, and I saw a “Mario Brothers” game for the 2600. Not understanding this was actually a different game, I let out a squeal unmatched to this day. Imagine my disappointment when I got it home only to realize it was not as “super” as Super Mario Bros. Even worse, it was another terrible Atari port. Thankfully, my fever was cured that coming Christmas with the gift of a Nintendo Entertainment System by my grandmother. From the first day I pushed that SMB cart into that beautiful gray toaster and pressed the power button, I was marked as a gamer for life.