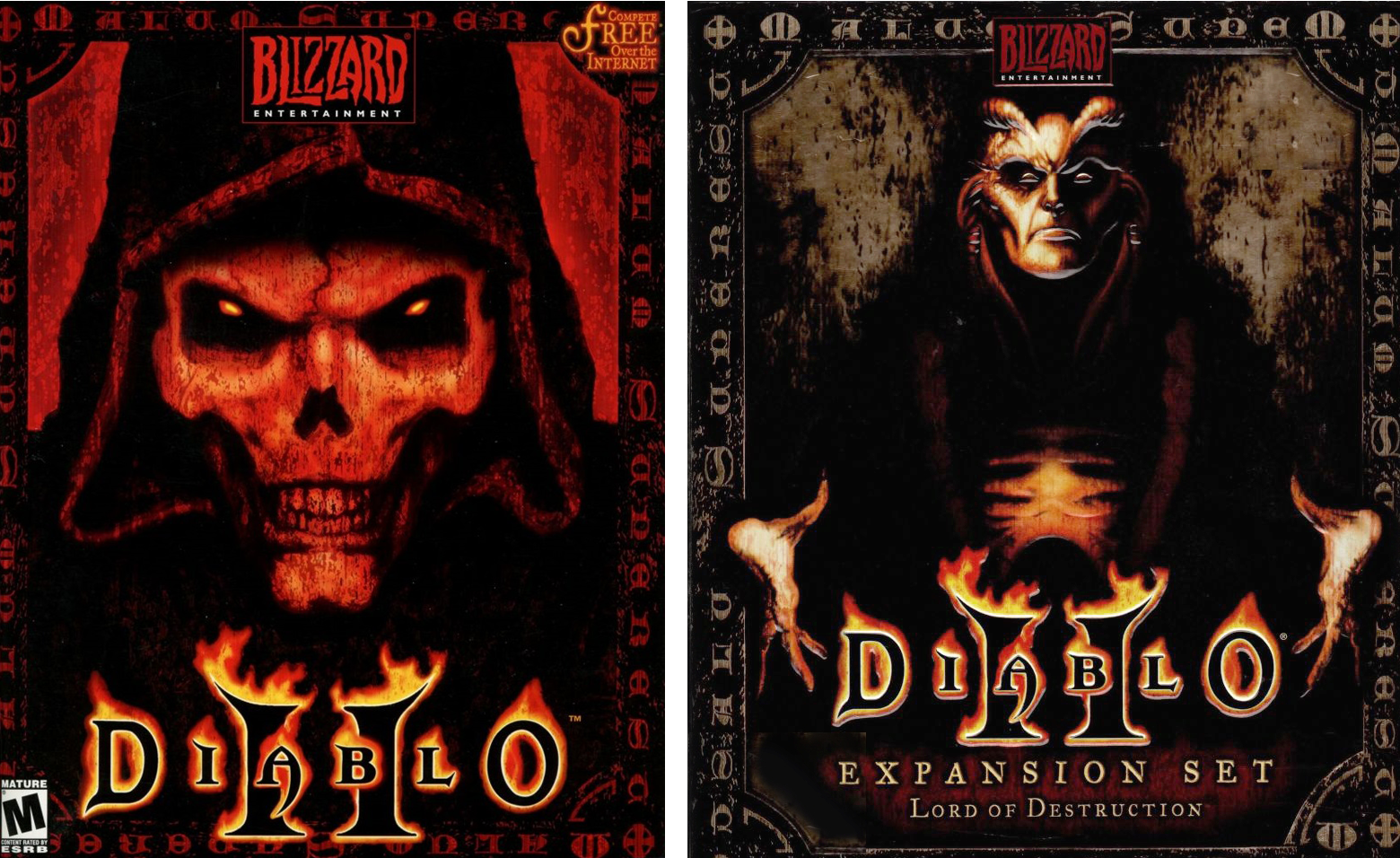 Four years after the original Diablo was unleashed upon the world, a sequel was produced. By this time, I was already living with my future wife and I warned her ,”You will not see me for about a week, once this game comes out.” – That was not a lie.

Diablo II is a worthy sequel to the original game. Everything that was right about the original Diablo is here, and just about everything that was wrong with it had been addressed. One issue that irked fans of the original game was item management. Often times, Diablo players would come across weapons or armor that were quite impressive, but unusable by their character. This left players with two choices, sell the gear or leave it to rot on the dungeon floor. Now, players have more options when it comes to dealing with items. They are now able to customize weapons using the new “gem” system. Or for more radical results, combine various pieces of gear in a magical “Horadric Cube” which transmutes them into something entirely different. As if that wasn’t good enough, Diablo II also introduced a “lockbox”. This was a place for players to place items so they will be accessible across various characters.

Speaking of characters, the character classes are a bit different this time around. Diablo II features the following options: Amazon, Barbarian, Necromancer, Sorceress and Paladin. 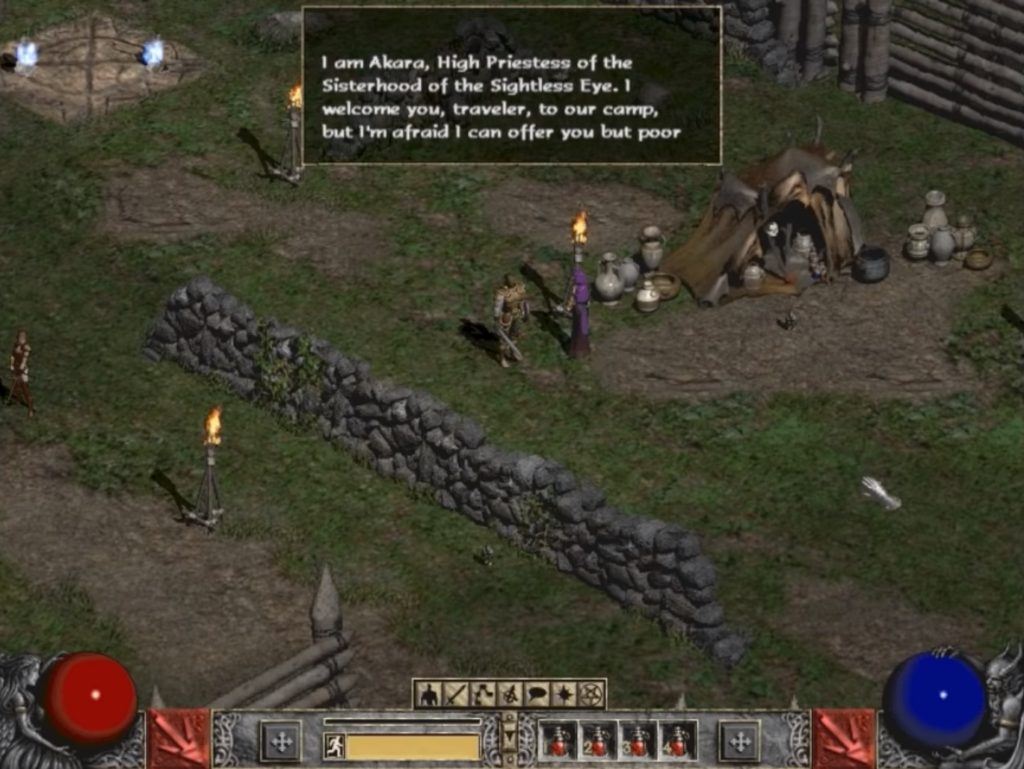 Gameplay between this and the original are very similar is many respects. However, instead of being confined to a dungeon players now find themselves battling in rocky highlands, vast deserts, and strange exotic jungles. Now, while the base gameplay is similar, Diablo II does feature some pretty radical changes. To start with, instead of constantly saving your progress like the original game, Diablo II is separated by chapters. Quitting the game and resuming resets all of the monsters and explored areas, but keeps your quest progress. At first this might sound a bit mind boggling. However, a new ability is available to warp to various checkpoints. This prevents a great deal of backtracking when loading a saved game. So it really isn’t as bad as it sounds.

In this game, you find yourself in pursuit of the “Dark Wanderer” (the hero of the last game, who has since become possessed by the spirit of Diablo). As you might expect, by the time you catch up with the Dark Wanderer, Diablo has returned and must be dealt with. The game itself features plenty of content and is quite replayable. But still, many players found themselves feeling a bit unfulfilled. Luckily, not long after the initial release of Diablo II,  the add-on: Lord of Destruction was unleashed for players to devour.

In the opinion of many, LoD really completes the original game. It integrates itself into Diablo II perfectly, adding two new character classes (the Druid and the Assassin), new items, as well adding a whole new final chapter to the original game. I am one of the many that tend to look at Diablo II: Lord of Destruction as inseparable from the basic game itself.

In this expansion, the lead character pursues Diablo’s stronger brother, Baal in hopes that defeating him will finally bring eternal peace. 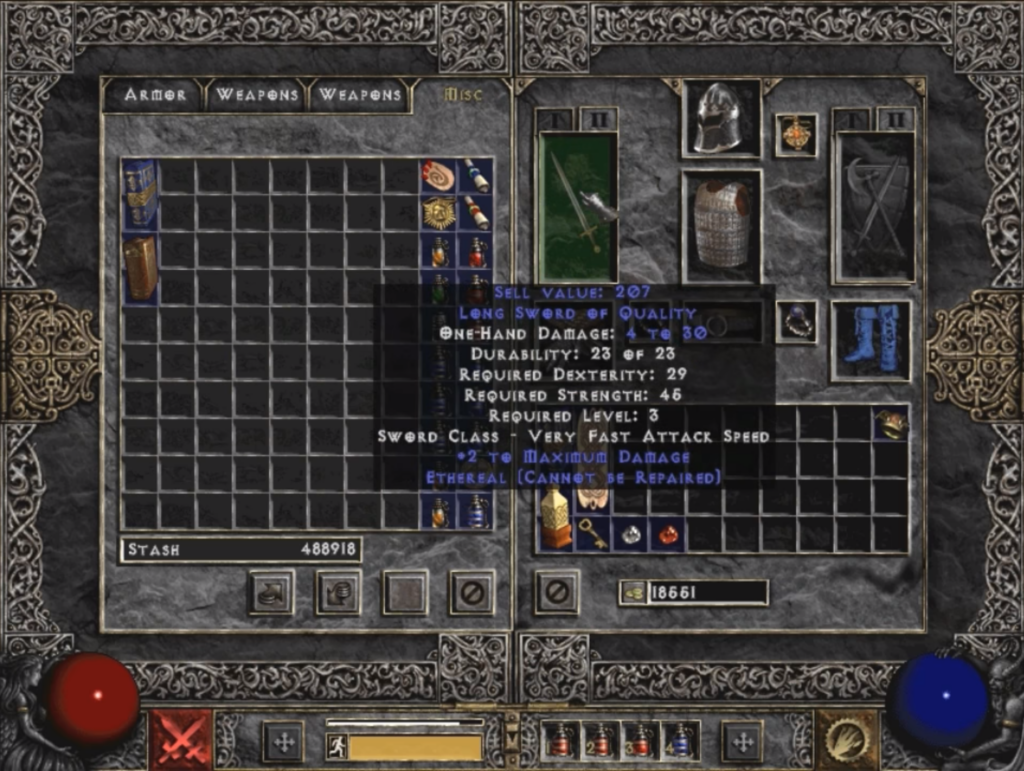 Diablo II was the first game in the series to feature 3D acceleration via 3DFX. While this was great news at the time the game was released, it actually makes it a little tough to run on modern systems. These days, modern graphics cards no longer use the proprietary GLIDE system found in old 3DFX accelerators. Thankfully, there is a solution – GLIDE wrappers. Players who want to enjoy Diablo II today have a number of solutions at their disposal. (Just search “GLIDE wrapper” on Google). But be warned, it may take some tinkering with before everything works perfectly.

One of the best and worst things about the original Diablo was the online multiplayer. If you read my review of the original game, you’ll know that it was riddled with cheating players, item dupers, and all sorts of headaches. Thankfully, nearly all of that has been resolved in this release. In fact, playing Diablo II online was really the best way to enjoy the game. I say “was” because these days, the online community has dwindled significantly.

As I mentioned before, Diablo II takes all of what was great with the original game and expands on it in a masterful way. This is a fine example of a company that took the success of their original creation and actually improved upon it rather than just slapping on a new coat of paint and hoping no-one notices. 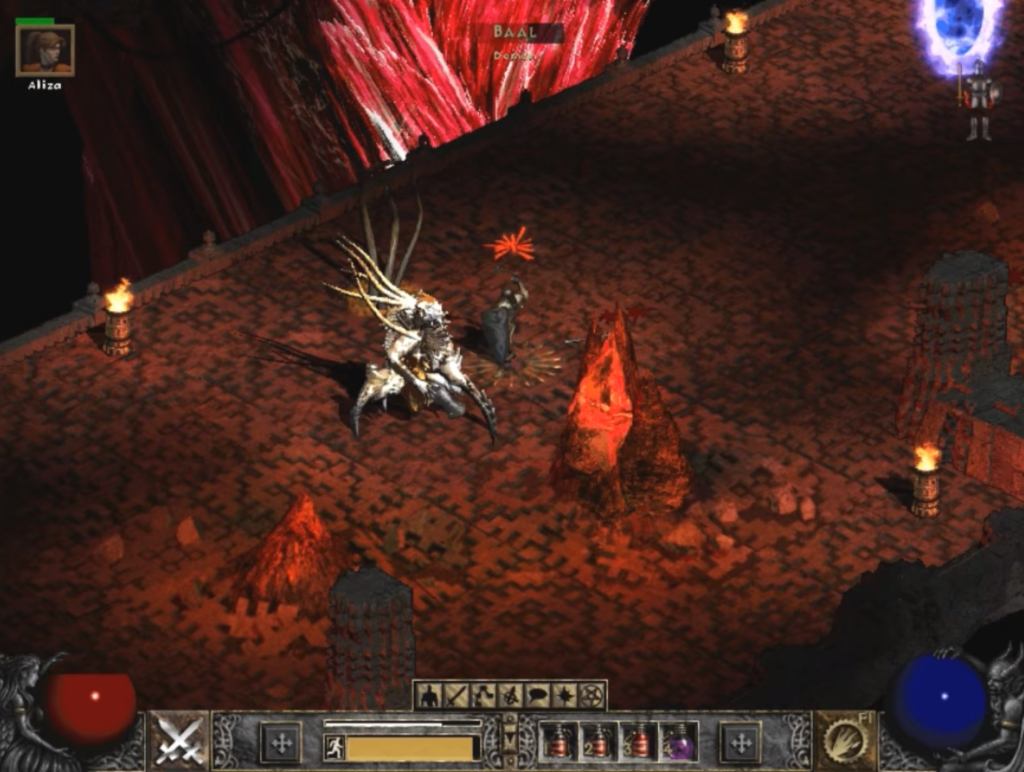 Difficulty: Varies –  Like the original, there are various difficulty settings for the game, ranging from normal to insanely difficult. These options are pretty accurate.

Story: Diablo II features a much richer story than the original. Cutscenes exist between each chapter to help drive the narrative. Also, banter with NPCs is more frequent and is often more integral to the story.

Originality:  If you are familiar with the original Diablo, you will feel right at home here. But don’t worry, Blizzard added enough new and original features to keep this entry feeling unique.

Soundtrack: Another excellent score by Blizzard. The vibe here is very similar to the the original Diablo. Great compositions that fit in very well with the environments throughout the game. Timeless stuff.

Fun:  Even better than the original! The scenery changes enough so as not to be repetitive. However, I did find myself wishing that the seemingly endless jungle levels would just hurry up and be over. My favorite part of these games is always the treasure hunting – of which there is no short supply.

Graphics:  Released at the dawn of 3D acceleration, this title boasted Glide and Direct3d acceleration. These days, no one has a Voodoo card so, you’re stuck with D3d. In my opinion, on a modern system, the 3D graphics are a bit muddy so the get the best results, you’ll want to look into alternatives. In some respects, I feel the the original Diablo is actually a bit more polished visually – even if it doesn’t feature accelerated graphics.

Value: Diablo II is still available but the cost can vary. For fans of the series, nearly any price will be worth it – it really is that good. But casual players who are not invested in the lore will likely want to turn their attention to Diablo III.

Overall score (1-100): 95 – This is the essential retro-Diablo experience. It improves on the original Diablo is nearly every way. When paired with the Lord of Destruction pack – you can’t go wrong with this title.