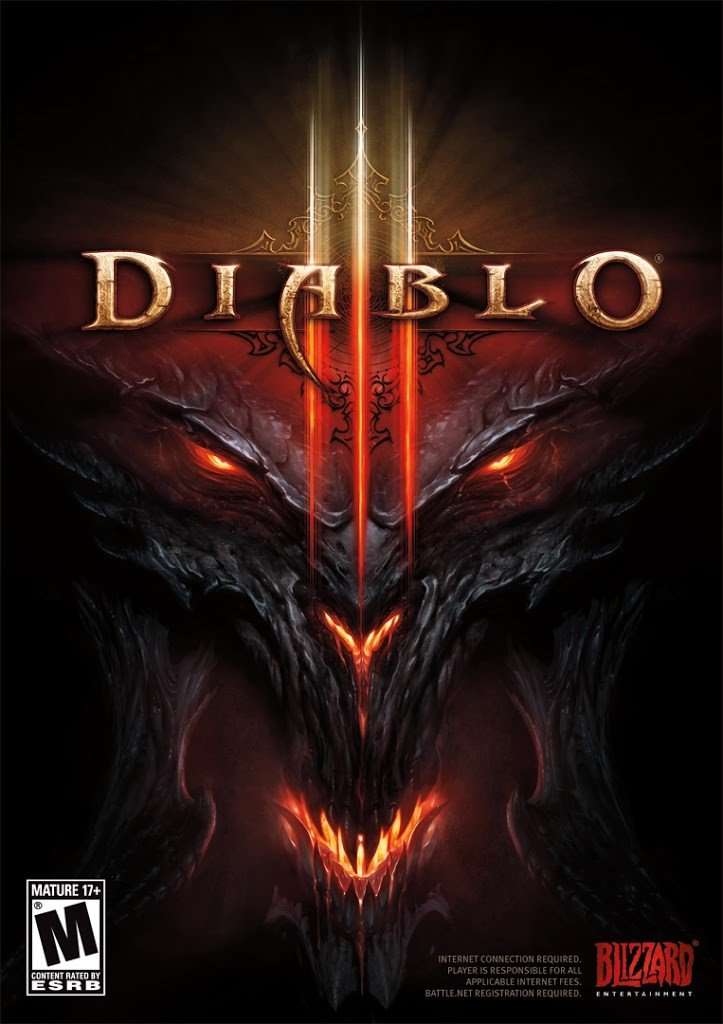 *** THIS REVIEW HAS BEEN SUPERSEDED BY THE RELEASE OF AN EXPANSION ***

After nearly twelve years of waiting, Blizzard finally released the next chapter in the Diablo series. Diablo III went on the market around the same time that I started this blog. Naturally, everything else on Earth stopped for me as I dived into the pits of hell one more time.

This title resumes twenty years after the end of Diablo II, this time the player assumes the role of “The Nephalim” a hero who arrives in the town of Tristram to investigate recent reports of a strange meteor. In Diablo III players can choose to create a character from the following class options: Witch Doctor, Barbarian, Wizard, Monk and Demon Hunter. As the plot unfolds, the player explores environments such as dark dungeons, disease infested sewers, war torn strongholds and even heaven and hell itself. 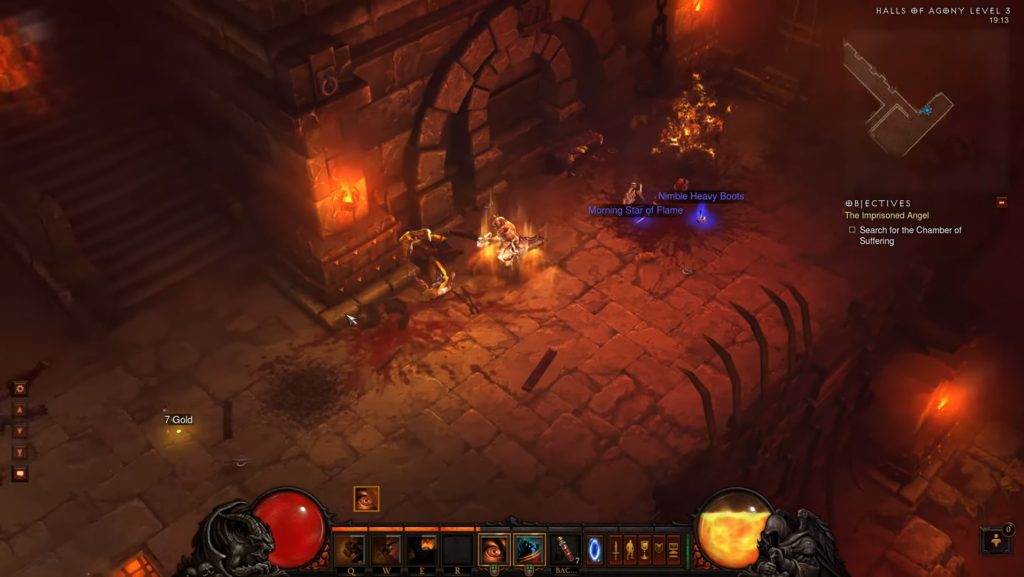 The play style is similar to the previous games. Crafting of new gear is done via NPC, and items can be purchased on a community-stocked auction house. Skills are handled much differently in this entry in the series. As players level up, new skill runes are unlocked that grant new abilities. Players are able to mix and match which skills their character can use at any given time. This allows for quite a bit of customization. It encourages players to experiment with different builds to find a fit that’s right for them.

One of the more controversial aspects in Diablo III is the “always on” internet requirement. Having a constant connection makes teaming up with friends extremely simple. However, for those that wish to play solo, requiring a broadband internet connection seems a bit silly. In situations where internet connectivity may be an issue, the entire game is unplayable. This is the real pain point for many players in rural areas. Plus during the initial launch, the game servers encountered massive congestion. This lead to queued log-ins and frequent game crashes. Players that simply wanted to enjoy the game on their own were understandably frustrated. Further controversy erupted over the announcement of an optional real-money auction house. Simply put, players can sell items from the game to other players in exchange for real-world currency. As you might imagine, this is extremely debated among fans. The argument has been made that this model provides wealthier players with a strategic advantage over others. 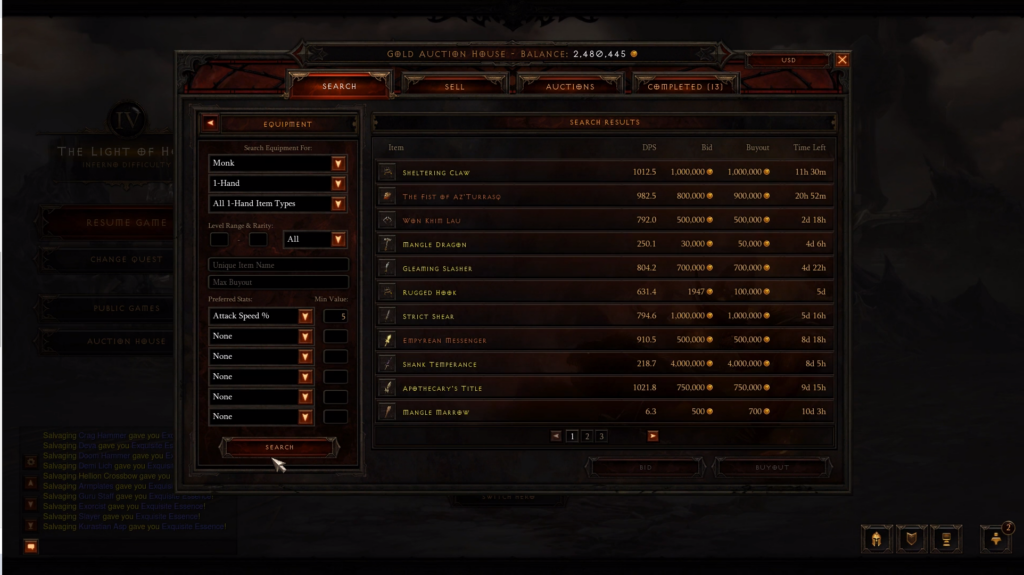 Graphically, the game is beautiful. It’s without a doubt the most visually appealing entry in the series. The audio and score for the game is equally lovely. This is another example of a title best played on dreary, rainy days, or in a dimly-lit room in the dead of night. Content-wise, I have no complaints. The randomly generated levels, plethora of quests and encounters make for a unique experience each time you play. On a few occasions, I found the levels to be a bit longer than I’d like, and wished that the area was a bit smaller and less redundant. But this was not something I encountered enough to really be a problem. Overall, I found the environments and enemies in the game to exceed my expectations. Many of the boss fights are very well done and create a great feeling of suspense and awe.

In the age of Internet gaming, it’s easy to forget that this is primarily a single player title. The online connectivity makes for a very unusual hybrid type of experience. In a sense, it’s sad to log in now, four months later, and see my friends list filled with people who have not logged in in over 100 days. Once beating the game, many players have simply moved on. Which, for a single player title, is not at all unusual. Despite this, Blizzard is still planning new content for Diablo III such as PVP combat. So perhaps, in the coming months an update of this review will be in order. Overall, however, I have to proclaim to be Diablo III to be worthy of a purchase. Especially for fans of the series.

*note: For those that wish to find me in-game, my BattleTag is OlGameHermit#1447 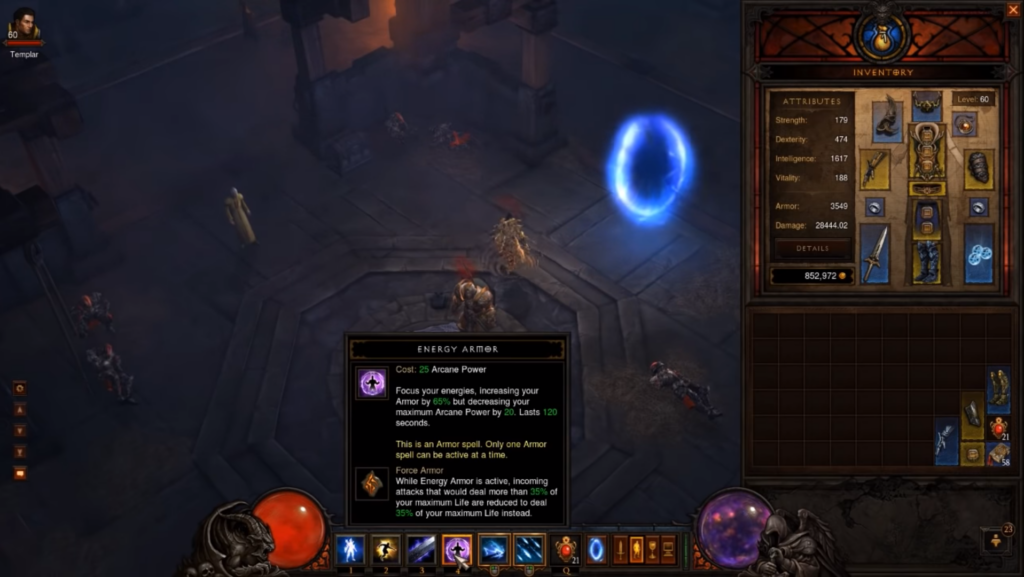 Difficulty: Varies –  Again, several difficulty levels are unlockable as you progress through the game. A hardcore mode also exists as it did in Diablo II, giving you only one life. For those that like punishment, have fun trying to play the game on Inferno difficulty with a hardcore character. There will be tears.

Story:  The best of all three games. Twelve years of development really gave Blizzard the time needed to create a storyline of epic proportions. Not to give anything away, but the character of Diablo does make a return, and the way this comes to pass will not disappoint. There’s a lot of nice throwbacks and Easter eggs for those that are familiar with the older games.

Originality: There’s no mistaking this is a Diablo game. However, with the new skill and companion system, there’s enough fresh ideas in the game to keep things from getting stale.

Soundtrack:   A beautiful score that is very fitting. In my opinion much better than the first two games. I actually have a copy of the soundtrack and find myself listening to it when writing or when I’m trying to get my creative juices flowing on some type of fantasy project.

Fun:  The game can definitely provide loads of entertainment. At release, a large number of issues caused a great deal of frustration, however. I was excited to the get the game home and play, only to find the servers down due to congestion. This, along with a few early bugs, really put a damper on things. Of course, now most of these issues are ironed out. Aside from the occasional gold farmer spamming the world chat window, there’s not too much to complain about. This title was designed with re-playability in mind, and if definitely succeeds.

Graphics:  Diablo III is an absolutely lovely looking game. This one area where the game shines. Everything from the character sprites to the dynamic light looks stunning. This title is a huge improvement over the other entries in the series. Now, if only they would redo those older games on the new engine…

Playcontrol:  Very similar to other titles in the series but a bit more finicky. Occasionally, during high energy battles and boss fights, I found it difficult to select the target. But aside from some occasional frustration, it’s pretty spot-on.

Value: Diablo III is still a new title and thus, you’ll be paying a premium price for it. Despite its faults, I do think the price if well worth it. As time goes on, the game will continue to evolve and players who are willing to stick with it will be sure to get plenty of bang for their buck.

Overall score (1-100): 80 – Due to its troubled launch, and what I feel is a little overly-complex skill system, I cannot give this game a perfect score. It is a title that I certainly recommend, but I do feel that there was a bit more that could have been done to add some polish. I wish the game had an offline option, although I understand what Blizzard was trying to achieve with requiring connectivity. I’m not a fan of the real-money auction house, but it’s easy enough to ignore unless you live for online play. All that being said, Diablo III is an excellent title and well worth your dollars. It is a nice capstone to the series, and I hope to see an expansion of some sort in the future. At this point, I still feel that Diablo II offers the definitive Diablo experience. However, due to it’s age and inaccessibility it is hard for many new players to get started with it. I am looking forward to playing through Diablo III again with the release of the upcoming 1.05 patch.