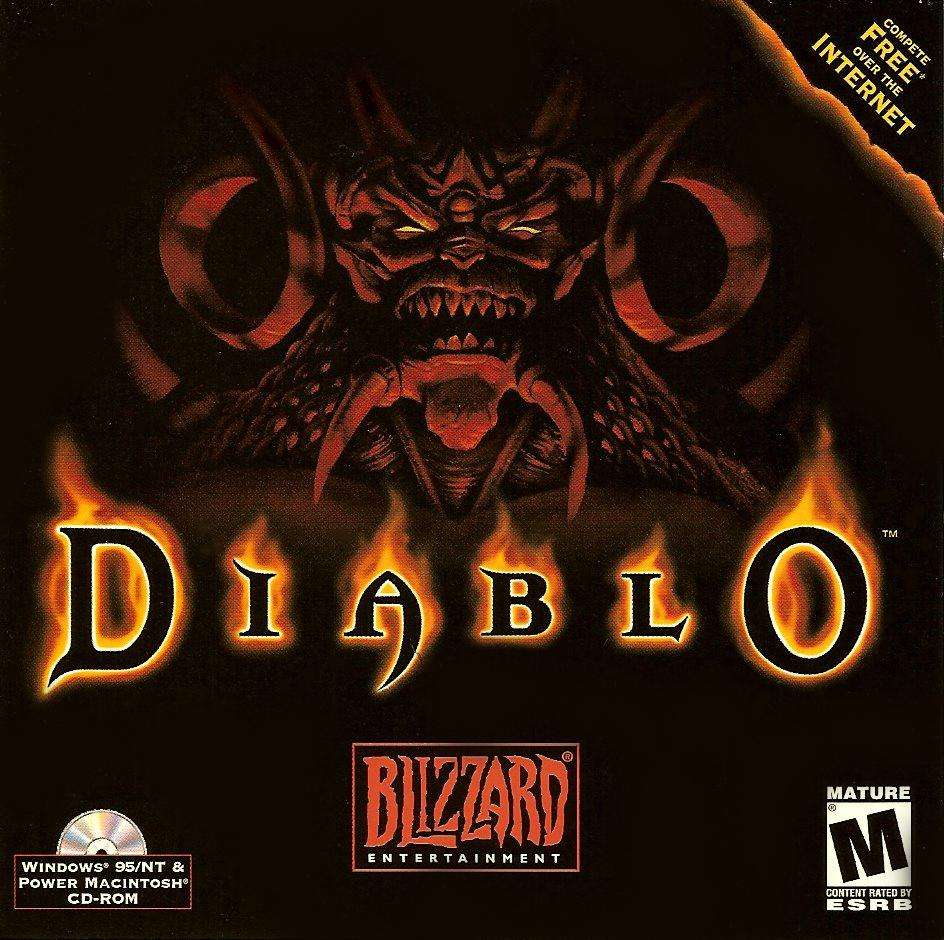 Today, I’ll be taking a change of course for a bit to talk about a classic PC game, Diablo. Diablo was one of the first PC games I ever purchased with my own money. From the very first time I laid eyes on this game, I knew I would spend countless hours with it – and I did! Now, with the recent release of the long-awaited Diablo III, I figure there is no better time to sit down and revisit the game.

In the summer of 1997, as a highschool graduation present, my parents gave me the funds required to build my very own personal computer. I remember it well. It was a Pentium 166 MMX, with 16 megs of RAM. I loaded it with the OEM version of the OSR2 release for Windows 95 and it ran like a dream. One of the first things I did after building my system was catch up on a lot of great PC games I had missed over the last few years. I gobbled them all up. Duke Nukem, Quake, Heretic & Hexen, just to name a few. Then one day at Media Play I came across the Diablo box and I was enthralled. Everything from the graphics, to the cover art captivated me. Plus, Diablo was a game I could actually play online with other people for FREE. In a time when most online games charged a fee, it was too much to pass up. I snatched it up and brought it home.

Diablo appealed to me almost instantly. It was a modern take on the classic dungeon-crawl games I loved so much. The story behind the game is pretty simple. Essentially, there is a giant dungeon under the town filled with hordes of evil monsters and demons. But among those dangers are riches and spoils beyond your wildest dreams.

When starting out in Diablo, you have a choice to make. You must pick what type of character to play. You can choose between a Warrior, Rogue or Sorcerer. Each had their own advantages and disadvantages, but no matter what you playstyle might be, there’s something that will feel right to everyone. Having a background as a Dungeons & Dragons player, I felt right at home with any of the choices – but the Rogue has always been my go-to character. 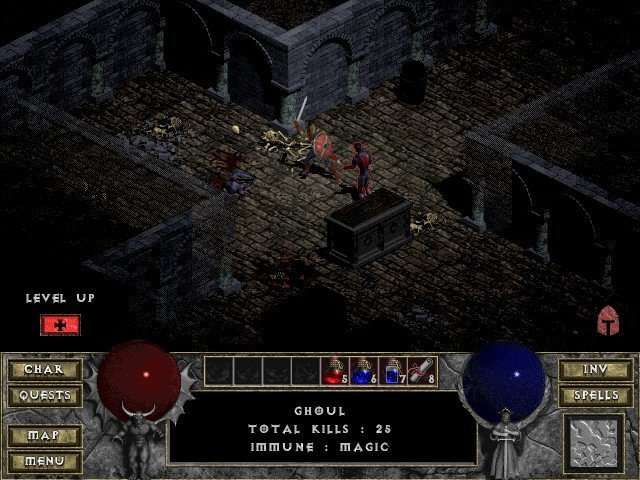 Diablo was unique in that when donning a new suit of armor, or equipping a new weapon, you could actually see it on your character. That was a new, but welcome concept for me. Most games I had played up to this point didn’t offer this level of detail. But little things like this are really just the icing on the cake. Diablo offered so much more to players than just window dressing. For example, no matter how many times you start a new game, you never played the same game twice. The levels in Diablo are created at random every time you start a new game. Even the quests and tasks that you undertake are often different. The way it works is there is a bank of possible quests that is shuffled out when you create a new game, so no two games were exactly alike. It was revolutionary and I was amazed by it.

Eventually, your character ventures down to deepest levels of the dungeon and discovers the shocking truth behind the terror that has enshrouded the town above. The game ends with your character defeating Diablo, one of the very Lords of Hell.

Despite being excited at the fact that Diablo offered free multiplayer. The multiplayer portion of the game didn’t appeal much to me once I actually tried it. I found it extremely difficult to play with friends using a modem connection, and attempts to play on Battle.net were often fraught with lag. Not to mention that Battle.net was filled with cheating players. And I mean FILLED. Nearly every game you joined – people were exploiting glitches and duplicating items. Ultimately, I enjoyed Diablo as a single player title. But for many, “online” was a favorite way to play.

I should also note that there was a semi-official expansion for the game. This add-on; Hellfire added a new playable character and a number of new levels and game mechanics. Sadly, Hellfire was riddled with bugs, the majority of which never really got fixed. On top of that, it just didn’t seem to feel “right” to me. These days, it is no longer considered a part of the canon Diablo story.

Even today, I feel that there’s a lot to be offered by this now classic title. Diablo has a lot of atmosphere. The visuals mixed with the ambient soundtrack match the tone of the game perfectly. This is one you’ll want to play on a nice autumn night with the lights out, perhaps with only a candle burning on the desk. So, If you enjoyed Diablo III and want to see where it all began, or if you’re new to the series, I do recommend this title first. Not to mention the lore and myth that is the Diablo story, gets it start here. 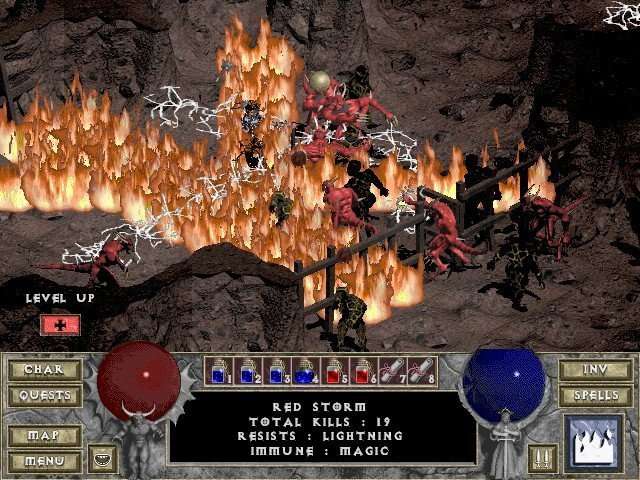 Difficulty: Variable –  This title offers multiple difficult settings and for the most part they are fairly accurate. Occasionally, you may find yourself swarmed by monsters, but there’s never much you can’t overcome on the standard setting. But on some of those harder modes… God help you.

Story: The storyline is revealed as you progress through the dungeon. Those players that skip through most of the text are missing out on quite a bit. For those that are willing to take the time to read and listen, you will certainly be rewarded.

Originality:  Diablo really set the stage for a new type of dungeon crawl. It redefined what a hack and slash game based in a fantasy world could be. When first playing it, I was reminded a bit of the classic arcade game Gauntlet. But the similarities soon faded.

Soundtrack:  Amazing. Simple, yet elegant ambient music. It really sets the mood for the game. The soundtrack is a work of art.

Fun:  This game provided me with many hours of fun over the years. It’s a title that I’ve often found myself turning to again and again. I recently played through it a few months in anticipation of D3‘s release and was surprised at how well it has stood the test of time. If you like dark scary dungeons and demonic monsters, this will be right up your alley.

Graphics:  At the time it was released, the graphics were really top tier. There’s no 3D acceleration or dynamic lighting, so it certainly looks dated by today’s standards. However, it holds up quite well. Modern Vista, Win 7 and Win 8 systems experience a color issue when first booting the game, but there are work arounds  available to correct this.

Playcontrol:   Point and click. It couldn’t be easier. I admittedly burned through a few mice over the years playing this game. Those mouse buttons wear out fast when doing battle against the legions of hell.

Value: Diablo was worth buying even when it was being sold at full price. These days, it can be found for next to nothing.

Overall score (1-100): 90 – Diablo is an excellent game. The only potential gripe with it comes in the form of rampant online cheating. But ignoring that and focusing on the single player experience, there’s not much to complain about. Diablo was a true game changer in the PC world. Recommended.

Available today on: PC (Blizzard online store and GOG)  – (Updated as of Spring 2022)