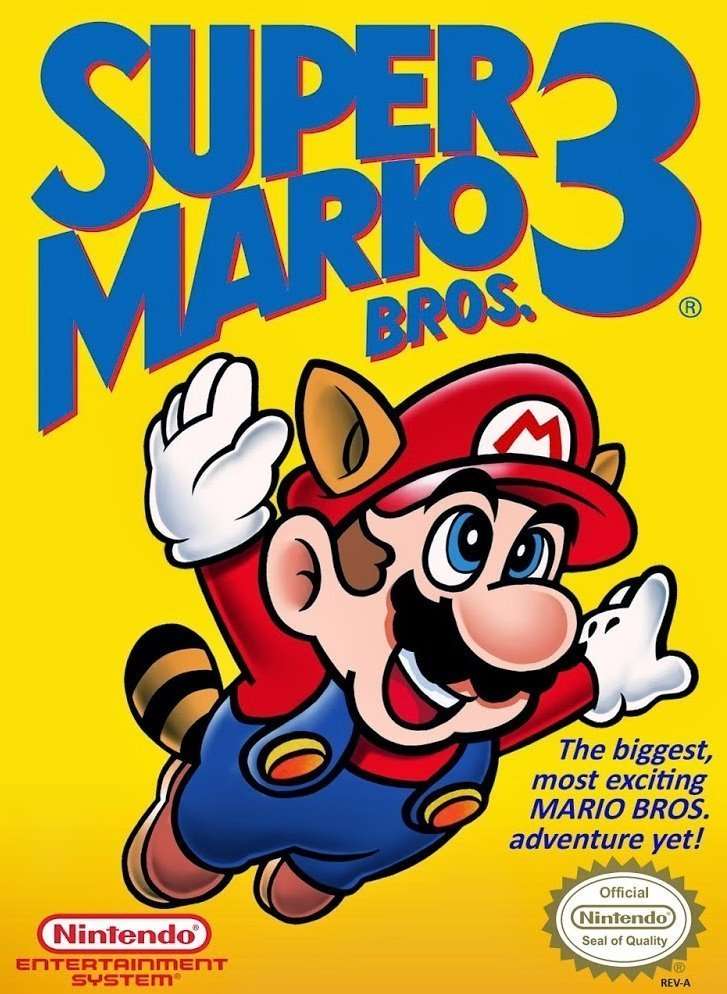 Oh, Super Mario Bros. 3. How I longed to get my hands on this game as a child! I remember my first encounter with this title. I was at an open-air shopping mall in Japan when I rounded the corner and came face-to-face with a brand-new Mario 3 arcade machine. I immediately became re-obsessed with Mario (is that even a word?). All of the wonder that enchanted me the first time I saw the original SMB came flooding back. It was Mario as I’d never seen him before. This time instead of just stomping turtles and mushrooms, Mario could fly! He could throw hammers, swim like a frog, turn to stone… it was glorious to my young eyes. But alas, I did not get to spend the time I wanted with the machine before being torn away by my parents. The travesty!

A few months later, the game was officially unveiled to the western audience thanks two a two-hour long Nintendo commercial – err… motion picture – called The Wizard. When the game was unveiled in that movie, there was an audible gasp heard across the theater. It sent kids into a fever pitch. Of course, I had already encountered the game in the wilds of Japan, but I cannot described how excited I was to know I would finally get my hands on this game at home.

Upon its release, Mario 3 was the game to have at the time. It represented Nintendo at their finest. Everything that was loved and cherished by Mario fans was cranked up a notch with this title. Exotic locales, strange and quirky power ups. Plus, all of the original gameplay elements that were absent in SMB2 were back. Koopa turtles, Goombas, it was all here. But this time, it looked even better. SMB3 also introduced a new overhead map system, complete with secret areas. Yes, the levels themselves still played in a side-scrolling fashion. But now players had some flexibility into which level they wanted to play. It was an innovative and welcome touch. All of this made SMB3 a truly magical title.

For this entry in the Mario series, Nintendo presented a slightly different storyline. Bowser and his children had turned the various rulers of the Mushroom World into animals. By doing so, he had stolen the throne from under them and installed his children as rulers of the various providences. It is up to Mario to defeat these Koopa Kids and transform the mushroom royalty back into their proper form. (A mission I took very seriously.)

To help along the way there’s a number of “Toad Houses” scattered all over the world map. Visiting these special areas will often present the player with a handful of mini-games. By successfully completing them, players are provided a number of rewards and power-ups to help them on their journey. Most of the time, these special areas are easily accessible. But occasionally, they are tucked away on the map behind optional (but difficult) levels. To me, these mini-games were a bit of a throwback to those seen in SMB2. In a way, having them here was a nice way to sort of bridge some of the mechanics between the two titles.

Playing through this game again as part of  the Mario 25th Anniversary collection reminded me what a classic title this was. The SNES version is absolutely gorgeous looking, of course. But even the original release was pretty advanced for its time. SMB3 is a fine example of the what the original NES was capable of. Its hard to say this, because the first two entries in the series are classics in their own right, but if you had to choose one of the original 8-bit Mario titles as best representative of the original trilogy, I’d have to give this one the honor.

If you’ve never experienced this classic, you owe it to yourself to set aside the time to play. Trust me, it’s worth it.

Difficulty: Medium – Probably the most difficult of the original trilogy (not counting Lost Levels). Some of those floating ship levels can be a real pain. But in the end, none of it is too difficult without little practice.

Story:  Bowser is back, but this time the plot is a little different. It’s the mushroom kingdom we all know from the first game, but this time with a few new twists. There’s not a whole lot of depth to the backstory, but after all, it’s a platformer. The set-up in the game manual is more than sufficient for this type of game.

Originality:  There’s enough original ideas here to make this game shine. Yes, the core of this title is the tried-and-true Mario formula. But the mini games, map system, and diverse levels really make this game a breath of fresh air for the series.

Soundtrack:   More fun, silly tunes! A classic soundtrack that ranks right up there with the first Mario games.

Fun:  This is a great buddy game. The two-player system presented in this game makes for a lot of fun. The colorful level design and quirky enemies really give this game a unique charm.

Graphics: This is pretty much the original 8-bit Nintendo at it’s best. Nothing was on par with this at the time it was released.

Playcontrol:  By this stage in its development, Nintendo had perfected the control scheme. On the original hardware, it’s a nearly flawless execution. The Virtual Console versions suffers many of the same issues that often come up with VC games. You’re playing on a controller not originally designed for the game. As a result, there are some minor quirks, but nothing too bad.

Overall score (1-100): 100 –  If somehow you’ve missed this title. You owe it to yourself to check it out. This is classic Mario at its prime and a must-have game for any serious Nintendo fan. This is the perfect platformer.