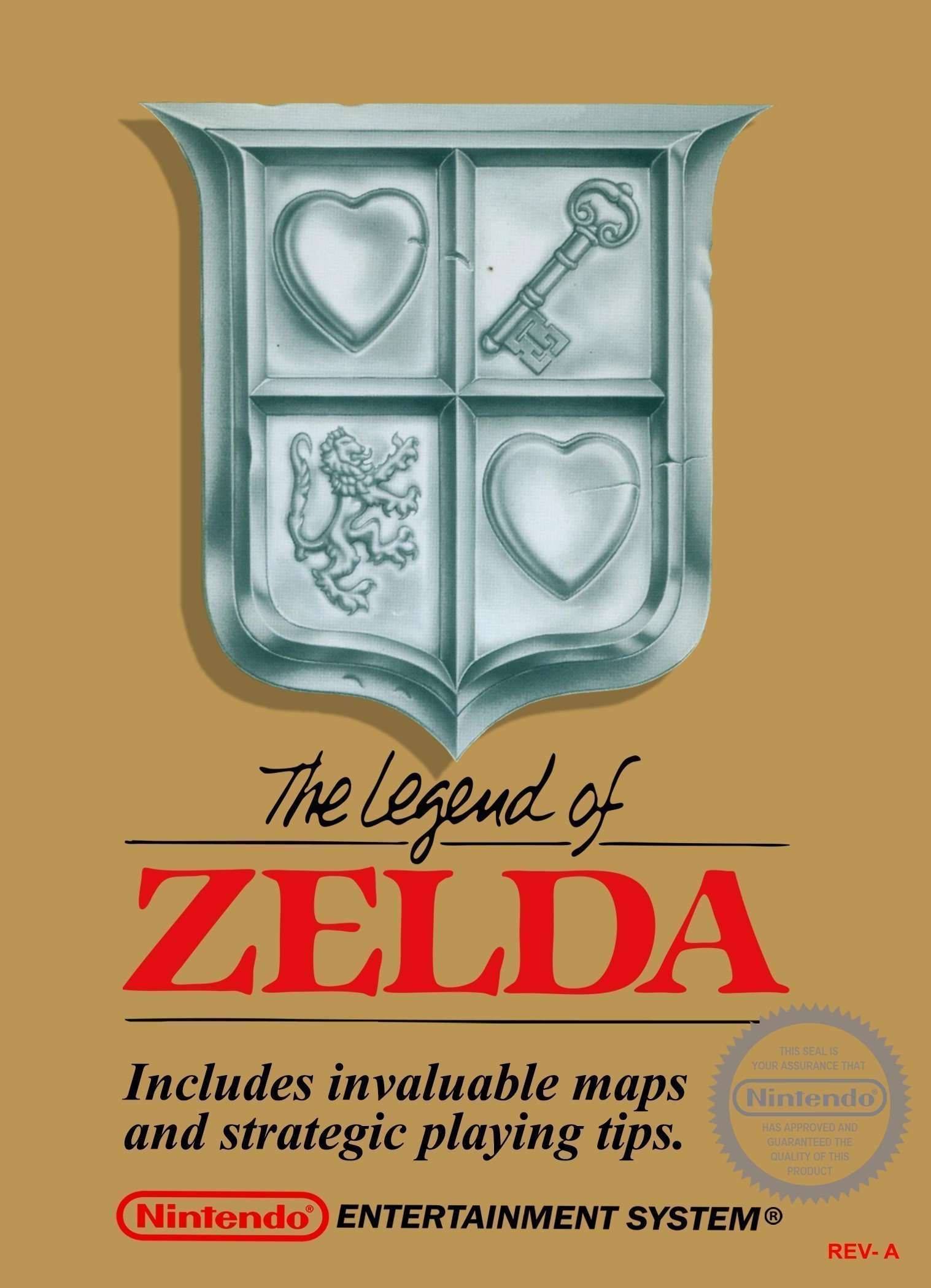 It didn’t matter if you were a fan of “sword and sorcery” games or not. When you saw the shiny gold cartridge that contained The Legend of Zelda, you were intrigued. At least, this was true for me. Until Zelda came along, I never gave much thought to things like wizards and dragons. I was all about spaceships and robots. But the lure of that glittering gold cart enticed me. Yes, the game cartridges for The Legend of Zelda were not grey in color like most others, but instead, as mentioned above, they were golden. 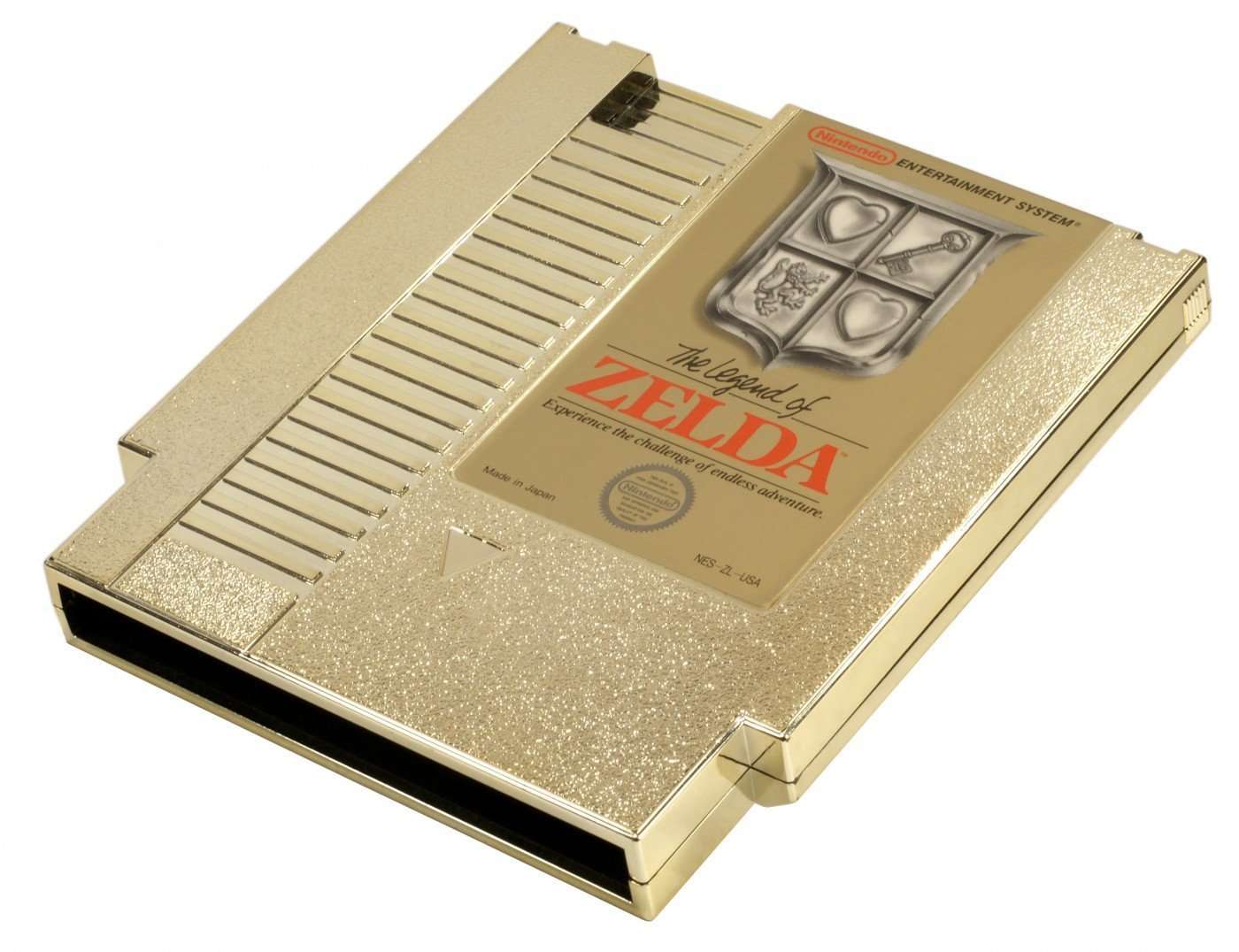 I may have been initially lured by the physical box the game has housed in, but I was hooked by the game itself as soon as I pressed the power button. Instantly, I was hypnotized by a haunting lovely melody and the slow pulse of the glowing title screen. It was digital crack.

The Legend of Zelda takes place in the far away land of Hyrule. Zelda, the princess of Hyrule has been kidnapped by the evil Ganon. Ganon came into possession of an ancient artifact known as the Triforce of Power. Using it, he has overrun the kingdom with his terrible monsters. Our hero is a young man named, Link. Link must explore the kingdom in search of a similar artifact called the Triforce of Wisdom. However, to keep it out of the hands of evil-doers it has been cut into the eight separate pieces. Once the artifact is assembled, Link will have the power he needs to challenge Ganon and free princess Zelda. 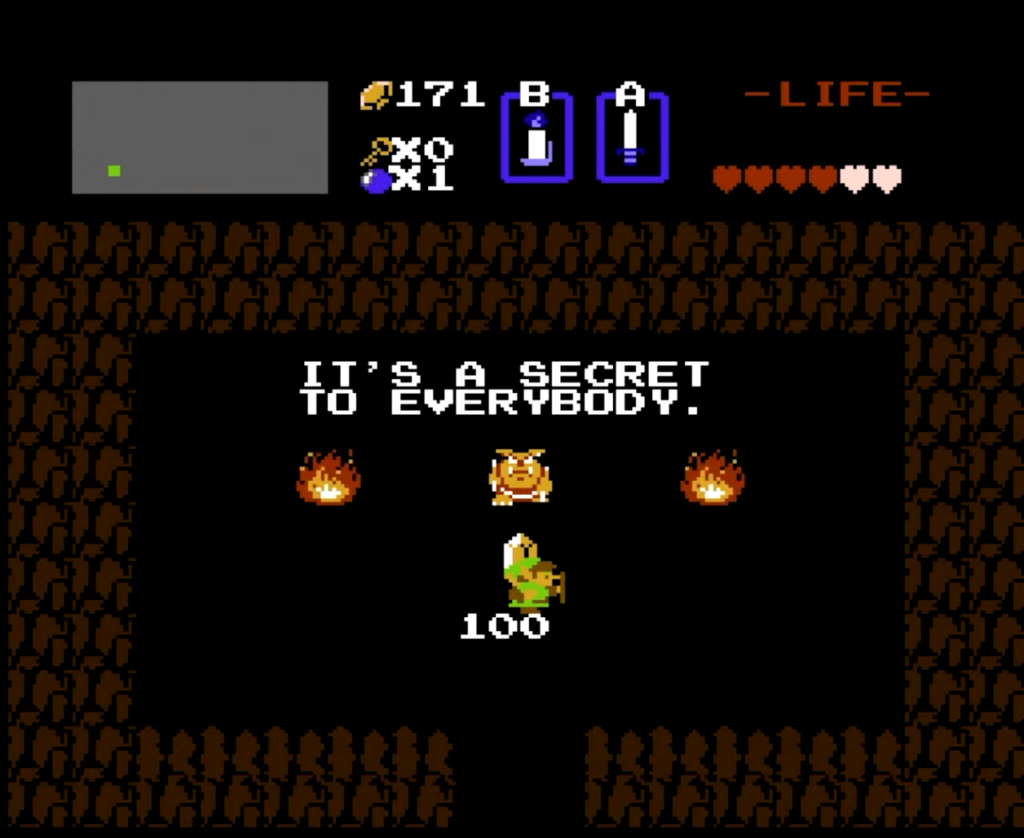 The Legend of Zelda is a fantasy/action game that is presented in a top-down format. Players control Link as he navigates through forests and mountains, battling enemies and seeking out various treasures to help aid him on his quest.

Link begins the game with no weapons or items at his disposal. But almost immediately he is given a wooden sword. Other items drop from defeating enemies and conquering the various dungeons found through the game. These hidden dungeons are scattered across the kingdom and once Link finds them, he must solves the various puzzles and defeat the challenging monsters within. Each dungeon also houses a special treasure that will aid Link on his quest. For example, the third dungeons contains a raft that enabled Link to reach new areas on the overworld map.        These dungeons also hold the pieces of the Triforce that Link needs to complete his quest. However, each Triforce fragment is guarded by a powerful boss monster. 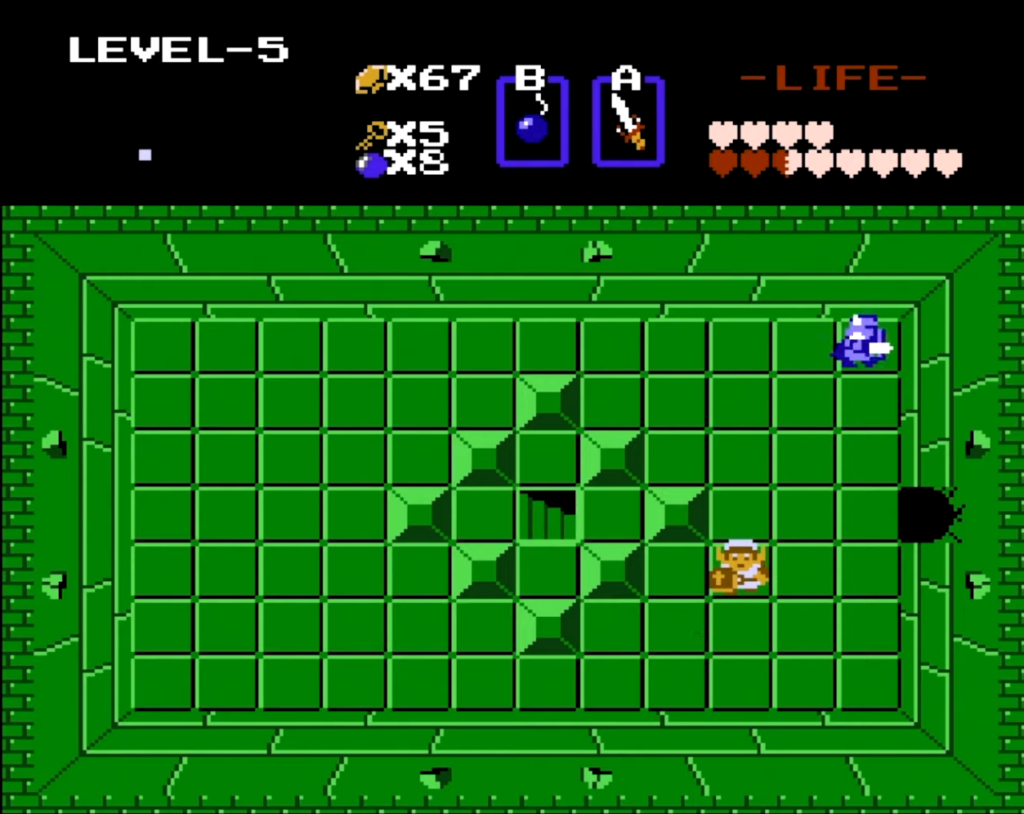 Once the game is complete, you unlock the ability to play the “2nd Quest”. This is essentially a remixed version of the standard game. The basic premise is the same, but the dungeons feature different puzzles and challenges. When I was younger, I only dabbled with the 2nd Quest and never actually played it through to the end. This time around, however, I took them time to play both scenarios from start to finish. And I’m glad I did! I can play the original game from start to finish with my eyes closed, but the 2nd Quest presented me with a whole new experience. It was fantastic!

In a time when most game cartridges saved progress using password-based systems, The Legend of Zelda was unique in that you could save your progress to the cartridge itself. Inside the plastic housing was a battery-powered chip that could hold saved information. This allowed players to stop and resume gameplay as needed. These days, this is a pretty novel concept. But at the time this game was released, it was ground-breaking technology.

The Legend of Zelda was the first of its kind and it spawned many sequels. It stands as one of Nintendo’s greatest successes – right up there with Mario. These days, you’ll be hard pressed to find many people between the ages of 25-40 that are not familiar with Link and his epic search for the Triforce. 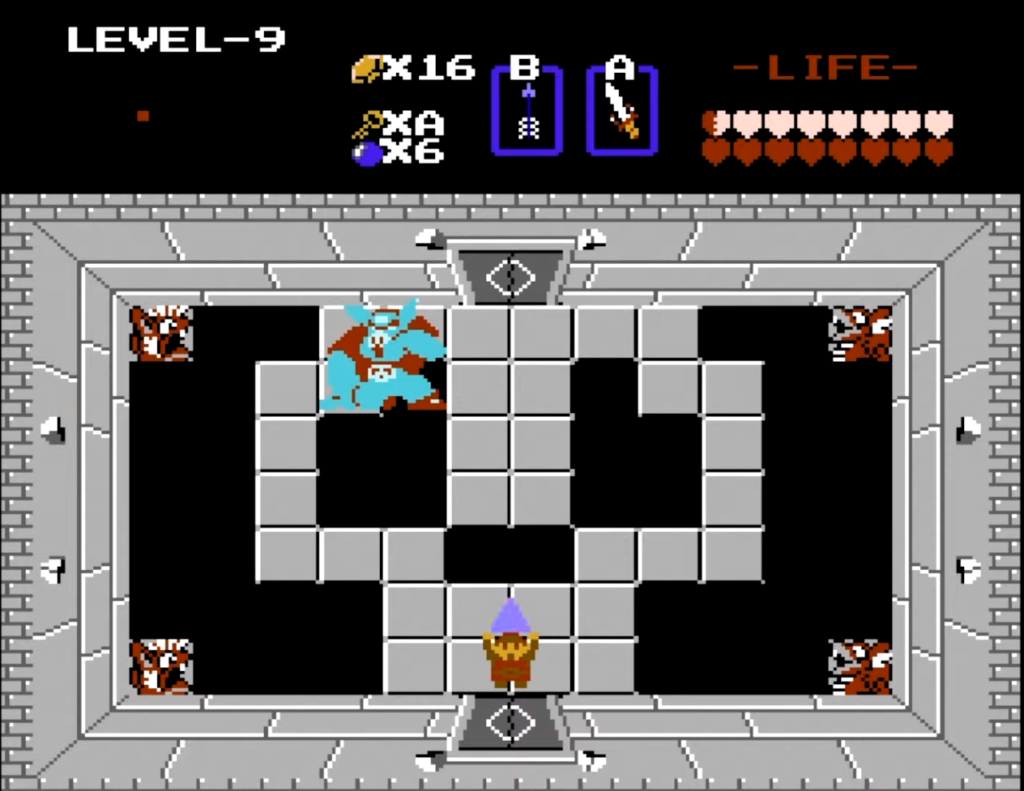 Difficulty: Medium –  For the most part, things are pretty easy going. In the beginning there’s a bit of a challenge until Link gets some decent equipment. However, players who are willing to exercise a little patience and take the time time to locate many of the hidden power ups won’t have much of a problem until the last few levels. At that point, things get a little tough again.

Story:  Originally, the story seemed a bit shallow. However, this was largely due to very poor in-game translation and a thoughtless game manual. Being the first title in the series, this game lays the groundwork for what will eventually become a mythology all it’s own.

Originality:  Good marks here. The formula for the game, in a small way, is a bit like Metroid. You have a whole world before you. You can explore it as you wish. However, there are many roadblocks along the way that will become passable as you progress. The overhead view is nice change in a a world that was typically dominated by sidescrolling games. This was one of the first games I remember with a stash of collectible equipment the player could swap out and select as needed.

Fun:  This is classic game with hours of fun. There’s no telling how many times I’ve played through this game from start to finish. It never gets old.

Graphics:  The graphics in this game are a little hard to define. I get impression that the art direction in the game is supposed to have a “cartoonish” feel to it. Colorwise- it succeeds. The biggest problem is that with such a wide view, there’s not a lot of detail. Regardless, everything on the screen is clear. There’s really no question what various on-screen objects are supposed to be. For an overhead game, the graphics were good enough.

Playcontrol:   No real issues here. This applies to both the original release as well as the modern-day ports available. The overhead view of the game, and simple controls lead to an all-around precise experience.

Value: These days, a copy of the original game can be bought on the Wii Virtual Console for $5. It is well worth this price.

Overall score (1-100): 100 – This is classic 8-bit Nintendo at it’s finest. For all the reasons listed above, this is one title that I have to recommend to every player regardless of age. Zelda is a timeless treasure that hasn’t really been affected by age.