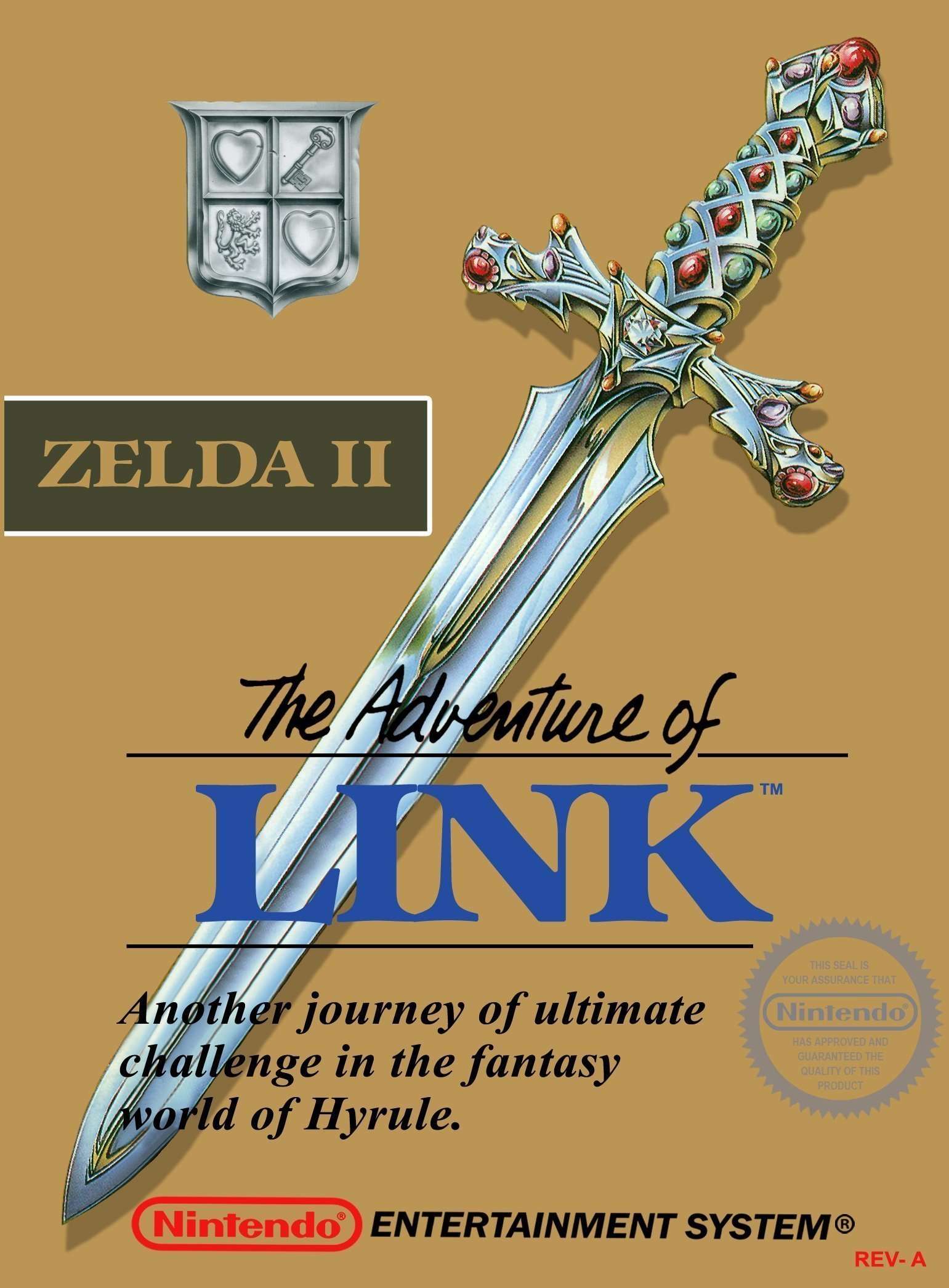 As one would suspect, after the smashing success of The Legend of Zelda, a sequel was not too far behind. For the follow-up, Nintendo made the bold move to creating a radically different game. Unlike it’s predecessor, Zelda II is not presented entirely in a top-down, bird’s-eye view. Instead, this game consists of two different modes: travel mode and action mode. Travel mode resembles the familiar top-down view from the previous game. This is what you see as Link makes his way across the vast world map. However, when he encounters monsters, enters a town, or enters a palace, the game switches to a side scrolling action mode. For fans of the original game, this was a pretty unexpected shift.

Zelda II begins not long after the end of the first title. On Link’s 16th birthday a mysterious crest resembling the Triforce appears on his hand. Link visits the royal palace to inquire about its meaning. It is there that he learns not long after his victory against Ganon, princess Zelda was cursed by a sleeping spell. The only cure is the recovery of the third Triforce artifact, the Triforce of Courage – which it is kept locked away in a great palace. To gain entry, Link must venture to the six lesser palaces, defeat their guardians, and place a magic crystal into a statue hidden in the depths of each palace. 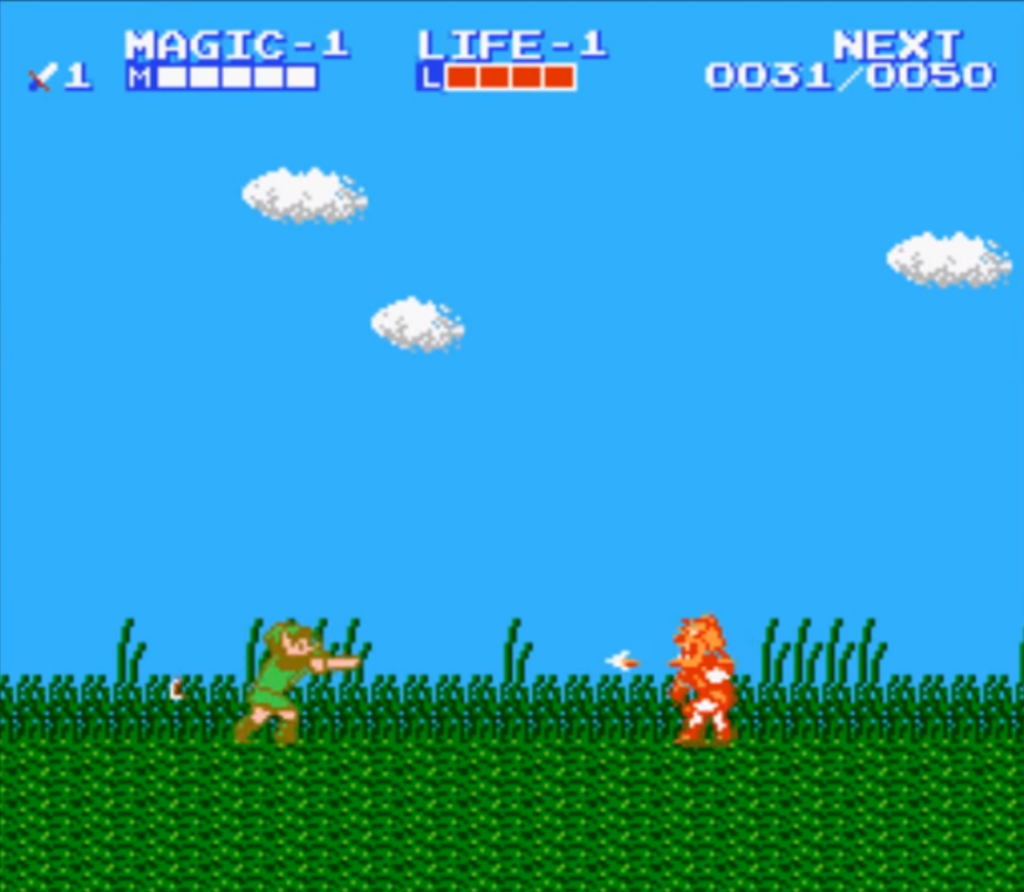 Zelda II features some of the weirdest game mechanics in the entire series. It contains elements of both an action-based platformer and those commonly found in RPGs. For example, Link earns experience points from enemy kills that allows him to get stronger as you progress through the game. Whenever one of these “level-ups” occurs, players can choose to either increase Link’s strength, defense, or magic. Yes, in this game Link is able to cast magic spells! Link can learn these magic spells and even new combat techniques from various NPCs scattered throughout the game.

As the game progresses, Link can visit various towns where he can rest up and hear the latest gossip. Sadly, many of the “clues” that NPCs provide often suffer from poor translation and as a result make little sense. 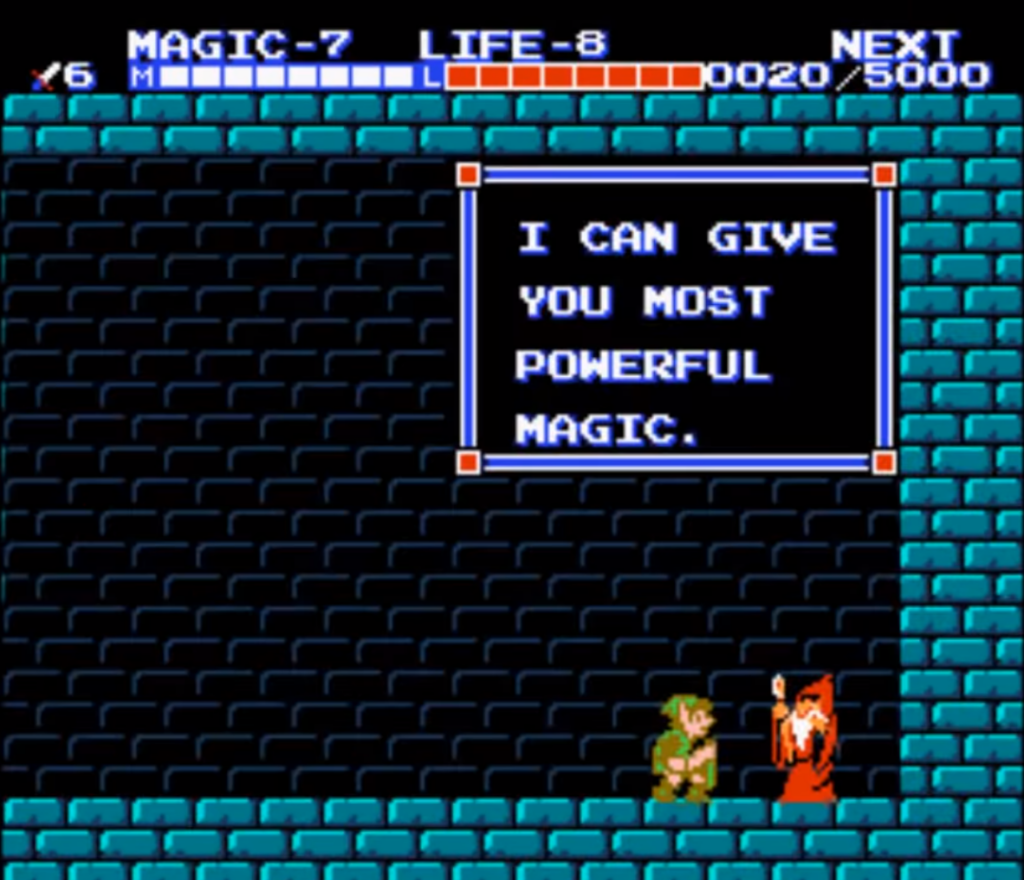 Zelda II is a good game in its own right, but it pales in comparison to the original. It simply doesn’t retain the magic that made the first game special. The sidescrolling action is precise and overall it works well, but it just doesn’t feel like it belongs here. On top of that, the overhead view features graphics that are actually a pretty substantial downgrade from those in the original game. That being said, some parts of the game are indeed memorable and it still manages to maintain its status as a classic NES title.

Classic or not, Zelda II is very much the black sheep of the series. Its odd presentation mixed with a pretty brutal level of difficulty make this one of those games that even fans of the series tend to pass up. All things considered, I do recommend that any serious Zelda fan give this game a once over. It is by no means the best retro Zelda title out there – and yes, it is pretty “meh” in most aspects. But still, it has an odd charm about it that is hard to put into words. I guess the best way to explain it is to look at it as if it were a bad B-Movie. It’s so bad that sometimes its good. 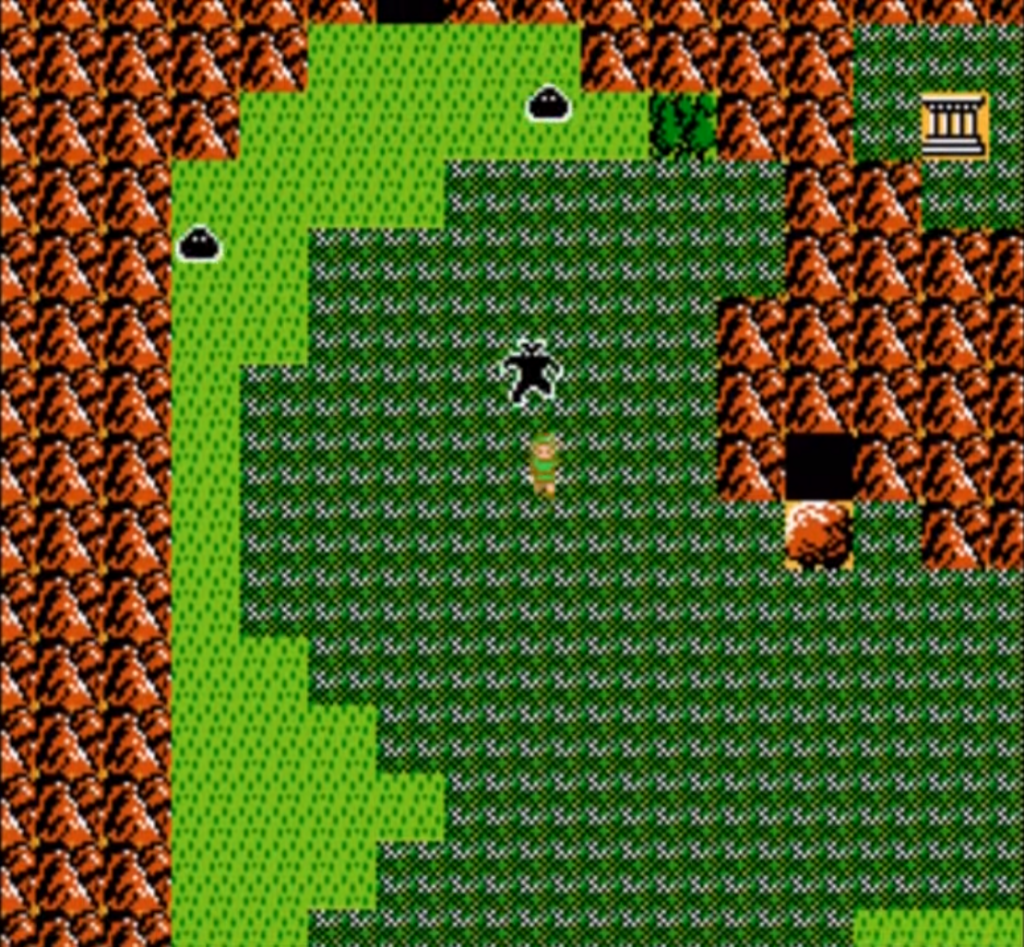 Difficulty: Difficult –  In my opinion, this title is way harder than the original. The side scrolling battles can be a bit awkward until you get the feel for them, but even then – you have to be pretty fast on your feet to avoid getting whacked by enemies. Some of the bosses are pretty tough without a specific strategy in mind. Even then, it’s no walk in the park.

Story:  I’m impressed by the fact that this is not simply a “Ganon has returned from the dead!” scenario. It seems that Nintendo put a lot of thought into creating something different. When considering the Zelda series as a whole, you can really see that a rich storyline is beginning to develop for the world of Hyrule.

Originality:  Nintendo definitely gets marks for trying something new with this title. Unfortunately, I feel that their efforts fell a little flat. The sidescrolling play didn’t seem to fit in well, in my opinion. But despite missing the mark a bit, it is still pretty refreshing to see a game company not afraid to try some new things.

Soundtrack: The music is quirky and catchy, but it doesn’t hold the same aura of mystique and epic feel that original game did.

Fun:  This game has its moments but overall it’s definitely not a favorite of mine. Some of the last dungeons are pretty brutal and the game has a very repetitive feel after awhile. I feel that the game overall had a lot of potential, but I think it would have benefited with a little more time on the workbench for some serious tweaking before release. Despite these criticisms, playing the game today, I find it quite enjoyable mainly for nostalgic reasons.

Graphics: This is weird one. The sidescrolling parts of the game a fairly well done, but still not as good as many other games that were released at the time. The overworld map, however, looks dismal. The graphics actually feel like a step backwards from the first Zelda game.

Playcontrol:   The sidescrolling combat seems loose at times. But overall it’s fairly accurate. As usual, playing on the Virtual Console adds a bit of imprecision to the playcontrol.

Value: These days, a copy of the original game can be bought on the Wii Virtual Console for $5. If you’re a fan of the Zelda series, it is easily worth the price. But if you’re a casual fan I wouldn’t pay much more these days.

Overall score (1-100): 50 – Make no mistake, this is a classic title and I recommend it for its historical value. But I feel that overall it’s a fairly mediocre game. Which is sad being that is the sequel to one of the Nintendo’s most legendary titles.