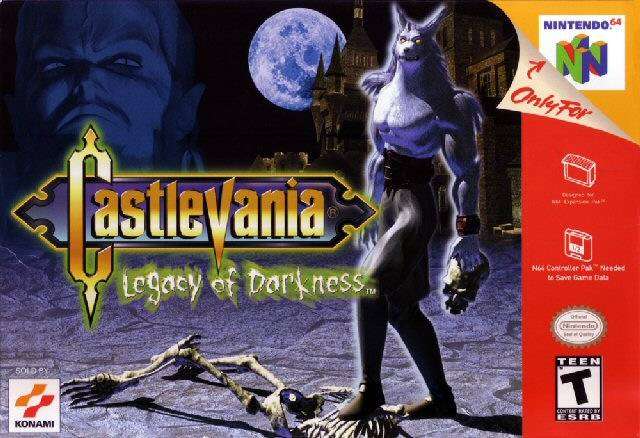 The other night we had an wonderful Autumn thunderstorm. Everyone in the house was asleep and the atmosphere was perfect to start the next chapter of my Castlevania playthrough.

Technically, the next game released after Symphony of the Night is actually an old Game Boy title called Castlevania Legends. I do own this game but since its release, it’s been retconned from the timeline. It tried to cash in on the success of SotN by tying the Belmont family tree in with Alucard. The whole thing was a disaster, and thank God it’s been officially declared null and void. For this reason, I chose to skip it entirely.

In fact, the next game in the series was also struck from the official timeline. The next title was a Nintendo 64 game called simply Castlevania (aka: Castlevania 64). The game was rushed to release in order to meet a marketing deadline, and it showed. Castlevania 64 was panned across the board by fans and reviewers alike. The controls were simply atrocious and many features of the game that were announced ended up cut from the final title.

But, all was set right by an updated version of the game later that year: Castlevania: Legacy of Darkness. Considered a “Director’s Cut” of the original Castlevania 64 , it includes all of the original game with some level tweaks, new characters, and other unlockables. That is the title I am reviewing today.

These N64 titles are distinct for being the first 3D Castlevania games developed. The camera controls are still a little annoying and compared to today’s 3D titles and the graphics leave a lot to be desired. But what the game lacks technically, it makes up for in atmosphere. 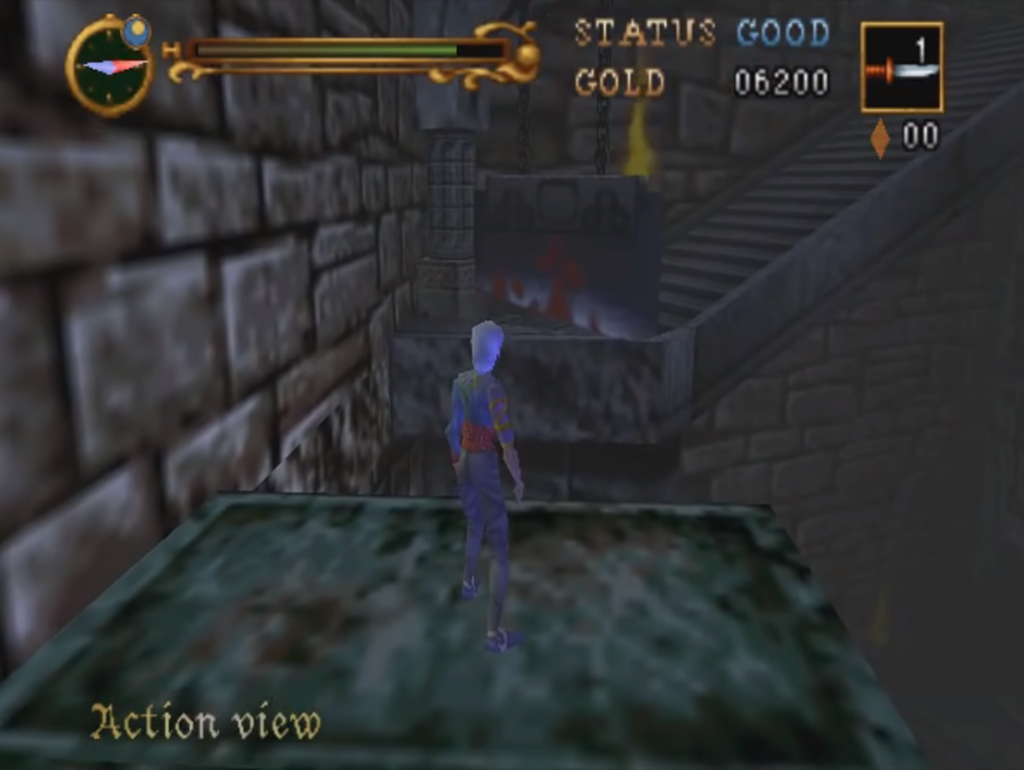 This game is divided into three chapters. When the game begins you play the role of a “man-beast” (werewolf) named, Cornell. After a long exile, he returns to his village to find it recently ransacked and his sister carted off by cultists! He ultimately chases them down to Castlevania. On the way he passes thru several different locales, one of which is the “Oldrey Family Mansion”. Cornell soon learns that the head of the household has recently become a vampire and at the request of the mansion’s madam, he escorts her son, Henry, to safety.

As you play through Cornell’s chapter, you learn a bit of the storyline behind the game itself and ultimately, SPOILER ALERT: – Cornell ends up being the catalyst for Dracula’s resurrection. (I won’t go into too much detail, but the the writers of this scenario did an absolutely fantastic job.)

The next portion of the game takes place eight years later. You plays as Henry Oldrey, the young man rescued by Cornell in the first chapter. Henry is now a knight of the Holy Catholic Church and he has been dispatched to Castlevania to locate several young children that have recently been kidnapped by the Dracula’s cult. You see, it seems cult was able to successfully resurrect Dracula as a living person. However, this time Dracula was actually been reborn as an infant. The problem is, they do not know which child born during the time of his resurrection holds his “resurrected spirit”. So now, eight years later, the cult is snatching up kids left and right trying to find their master. It’s Henry’s job to get to the bottom of this mystery.

In the third portion of the game you take control of Reinhardt a young man that shares some family ties with the Belmont clan, and who is also in possession of the legendary Vampire Killer whip. Reinhardt’s mission takes place at the same time as Henry’s. While Henry is freeing kidnapped children, Reinhardt is hunting Dracula. (This scenario was the focus of the original Castlevania 64).

But that’s not all! There’s another character named Carrie. Carrie’s portion of the game follows the same exact same storyline as Reinhardt – except instead of Reinhardt, you play as Carrie, a blood relative of the Belnades clan (from Castlevania III). This scenario exists as sort of an alternate take of the final chapter. 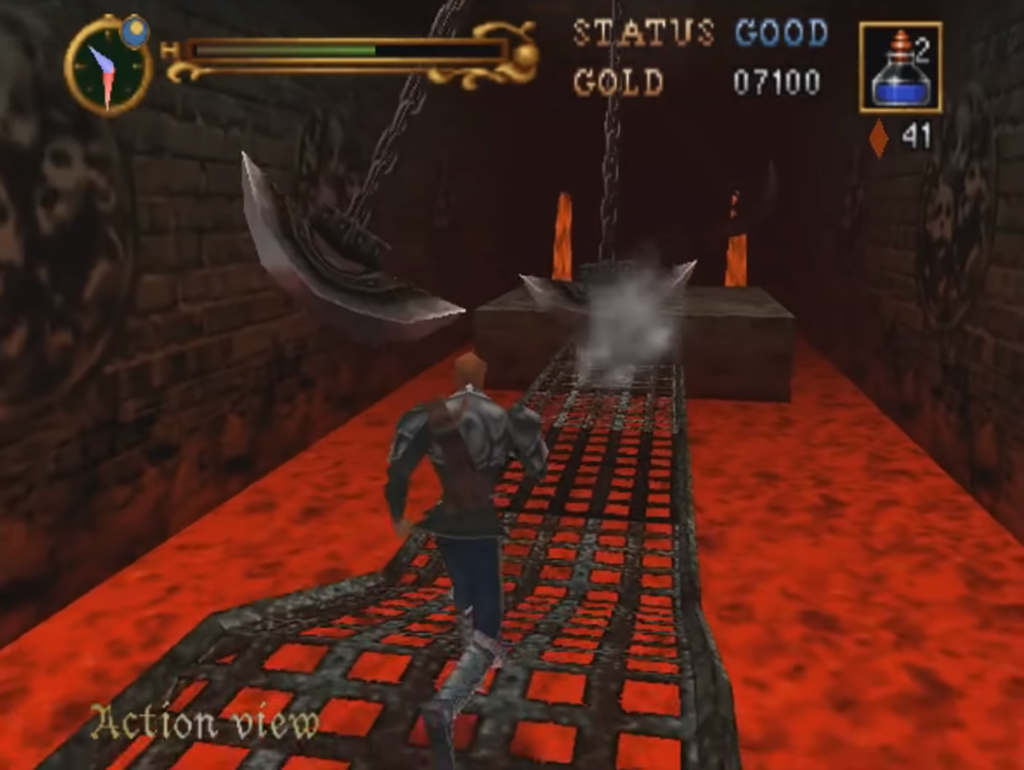 There’s plenty of content packed into this obscure title. But sadly, the gameplay experience itself does leave a lot to be desired. To start with, the graphics are a little rough around the edges. Now, I know this game was released in 1999. But even by then, 3D graphics were generally not this bad. The culprit here is the hardware – the Nintendo 64. While this system played host to a number of 3D titles, it just didn’t have the hardware to them justice.

Also, the playcontrol in this title is just bad. I won’t beat around the bush… I hate the N64 controller. So from the get go, I already had a bad impression. But physical controller aside, the button mappings and overall responsiveness just leave a lot to be desired.

But, on the whole, I found the game to be a nice change of pace.  It’s actually quite enjoyable once you get the hang of the controls (which was the hardest part for me). The storyline is intriguing even if it contains a cast of unfamiliar faces. This is one title I would love to see a modern remake of – but I doubt we’ll ever see that happen. 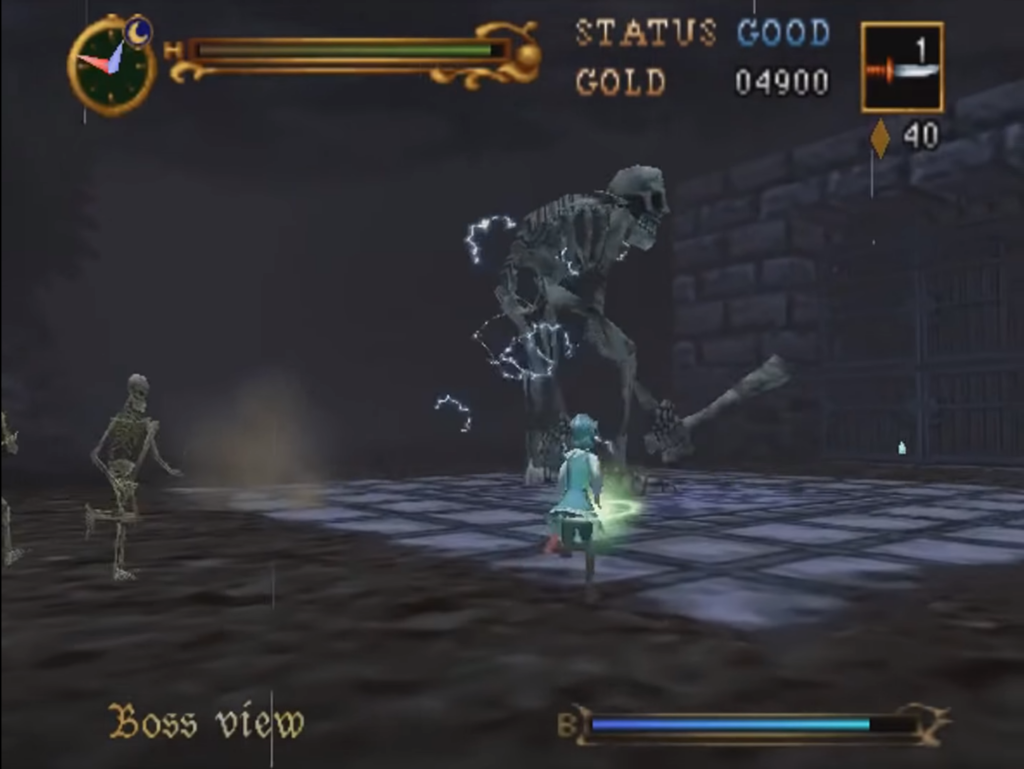 Difficulty: Medium – The first 3D entry into the series was difficult for me to get a handle on at first. Most of the challenge in the game does not come from the battles or puzzles, but from the playcontrol. After a while, I did sort of get used to it, but I found that many of my deaths were the result of being unable to control the character rather than they were from the game itself.

Story: The Legacy of Darkness version of CV64 does an amazing job in terms of storytelling. Each character has a somewhat overlapping destiny that is both well done and intriguing. I have to give the game high marks here.

Originality: The developers really stepped out of their comfort zone with this title. Transitioning the series to a 3D world really took some guts. Sadly, the first incarnation of the game was pretty bad, but many of these issues were set right with LoD.

Soundtrack: Not my favorite. Most the tracks are very ambient. They seem more like background noise than actual music. There are some exceptions, and a few of the tunes are pretty fun. But overall, the soundtrack does not stand up to par.

Fun: For the first half of the game I was extremely frustrated with things like the camera control. But once I was able to get the hang of things, it got better. In the end, I do have some very fond memories of the game itself. The mansion and tomb levels are some of my favorites. The game will be be remembered by me for its fun characters and atmosphere.

Graphics: When compared with the previously released SotN, this game suffers graphically. That being said, it’s actually quite good for the Nintendo 64. LoD is also a step up from the original CV64. I personally have never been a fan of the look most 3D N64 games have.

Playcontrol:   This is the game’s worst area. Even though much improved over CV64, the camera controls seem very buggy to me. But that being said, I’m also one of the few people I know who absolutely HATE the N64 controller and this game is no exception. I just found the controls to be substandard and lacking any logical sense. Yes, after a while did get used to them, but in my mind that doesn’t make them any better.

Value: This game is not available digitally so finding a copy online usually means paying some inflated prices. For the serious Castlevania fans, I would say anything under $40 is a deal. More casual gamers, I wouldn’t recommend anymore than $20.

Overall score (1-100): 65 – While this game does have its moments. I do find it a little hard to recommend. If you have a Nintendo 64, I feel this is a worthy title to get your hands on. However, I wouldn’t advise buying the system just for a chance to play the game. Everything that this game provides has been done better in other titles.

Available today on:  Currently unavailable.  – (Updated as of Spring 2022)