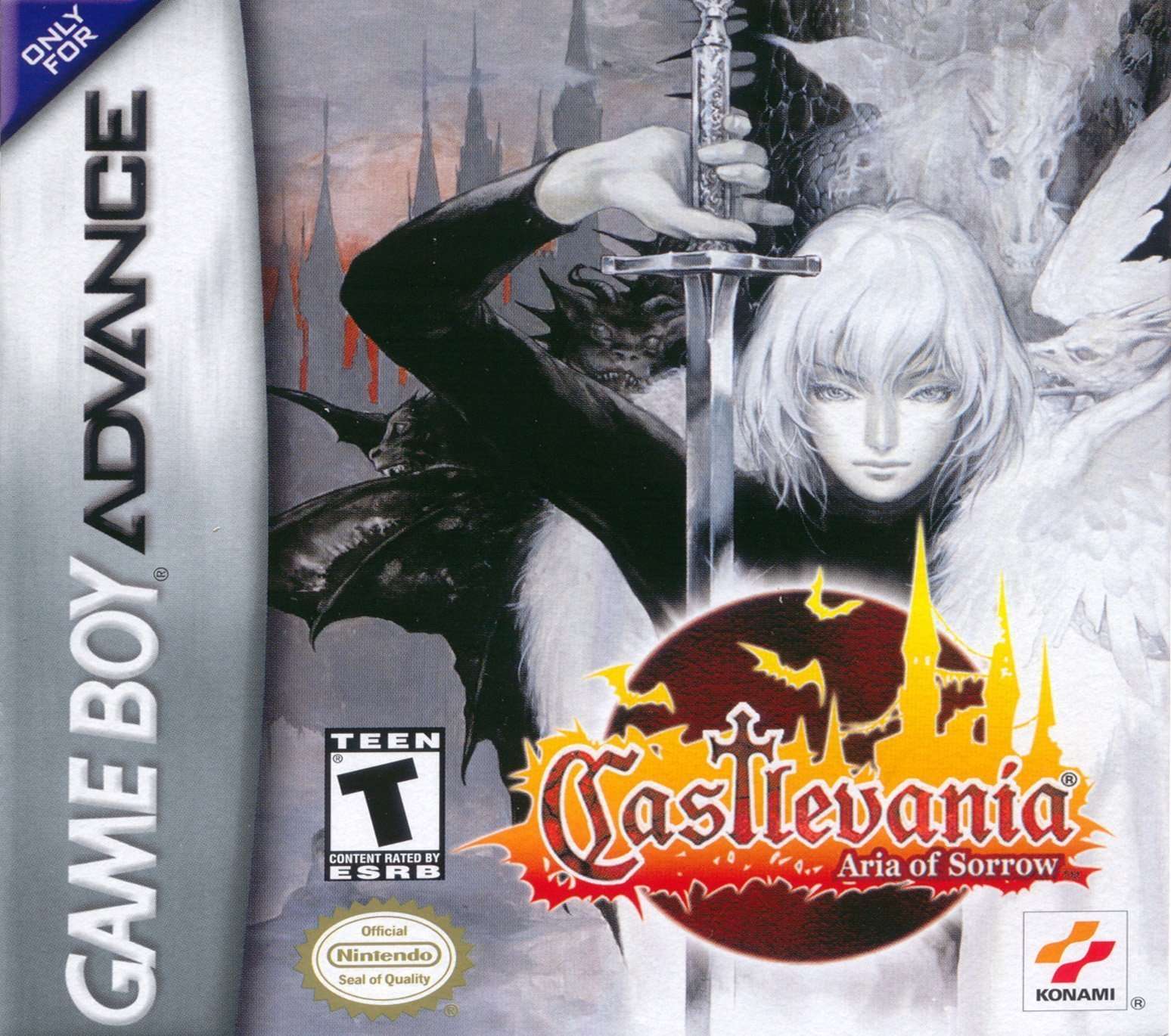 Today I review the last entry in the GBA line of Castlevania games; Aria of Sorrow. This game continued the “castleroid” trend. So as far as originality goes, the formula is starting to get a bit stale. However, what this title lacks in originality it makes up for in story and fun.

This entry takes place in the futuristic year of 2035. The game begins when two teenagers (Mina Hakuba and a foreign exchange student, Soma Cruz) visit a Japanese shrine to watch the solar eclipse. During the eclipse, something unusual happens and the teens mysteriously pass out. When they wake up, they find themselves in a strange castle about to be attacked by skeletons! Out of nowhere a mysterious man named “Genya Arikado” (aka: Alucard in disguise) appears and wards off the skeletons.

He explains to Soma that they are standing in Dracula’s Castle, and that he believes that there must be something magical about Soma or the castle would not have called to him. Alucard suggests that Mina should wait in the courtyard while Soma explores the castle to find a way out. Alucard promises to look for a way out as well. Soma soon discovers he has the unusual ability to absorb the power of monsters that he defeats in battle. So as monsters are slain, he learns new abilities that he can use in battle and exploration. 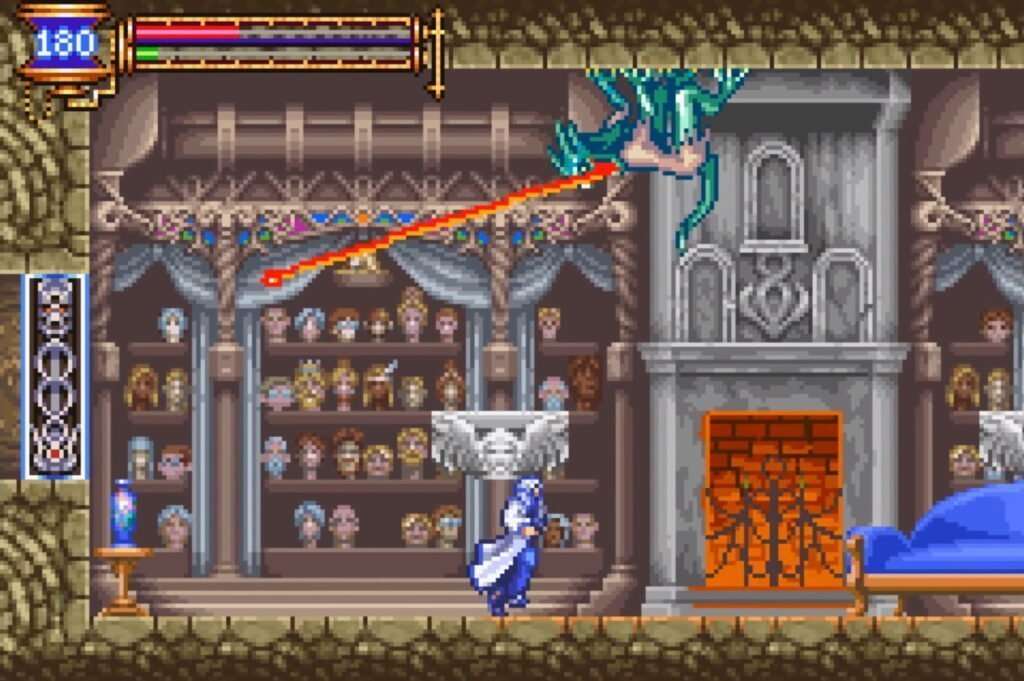 Throughout the game, Soma learns he is not alone in the castle. He encounters two very mysterious vampire hunters: Yoko Belnades and Julius Belmont. It is thru them that he learns that Dracula was permanently defeated by Julius during the “Battle of 1999” and that to prevent Dracula from returning, Castlevania was “sealed away in the shadow of the eclipse”. Without any piece of the castle existing in the physical plane, Dracula’s power was vanquished forever.

It seems, however, that some have taken advantage of the solar eclipse in order to claim the power of Castlevania for themselves. One such a man is the infamous cult leader, Graham Jones. Jones has the twisted notion that it is his destiny to become Dracula reincarnated. Throughout the course of the game, players will uncover a number of startling revelations about the various characters that mentioned in the summary above.

Unlike most Castlevania games thus far, it is storyline really drives tis game. It was a shock to many CV fans when they learned that Dracula was finally defeated once and for all and they never got the pleasure of actually seeing it happen. Due to this outcry, Konami promised to make a game featuring Julius and battle of 1999. However, as of the time of this writing, we still have yet to see such a game. 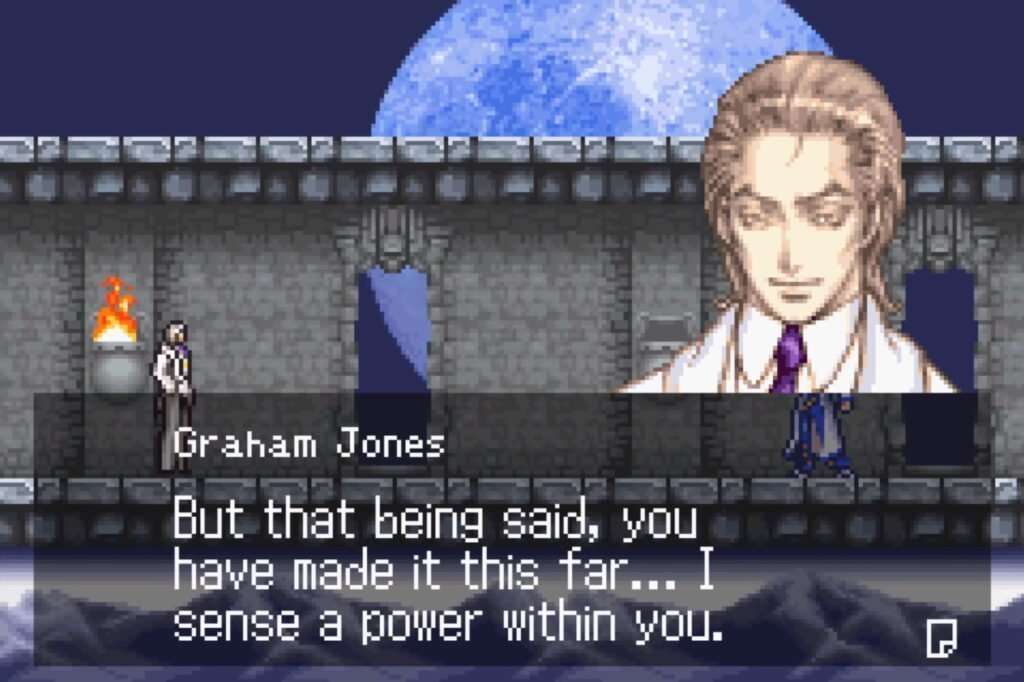 Like the HoD, this game has several different endings. The ending you view will vary depending on how many abilities you have unlocked and how well you’ve comprehended the story. The “soul absorption” mechanic is really the key to this game and also what makes it stand out against the other GBA Castlevania titles.

One really innovative mechanics is the ability for two players to trade souls between GBAs. This is accomplished using a link cable. Personally, I never had anyone to try this with, but from what I’ve heard, it works well.

Many gamers cite this as their favorite GBA-era Castlevania. I can certainly understand where they’re coming from. All in all, it is a good game, and the direction that it brings to the Castlevania franchise makes it a very worthy title in any fan’s library. 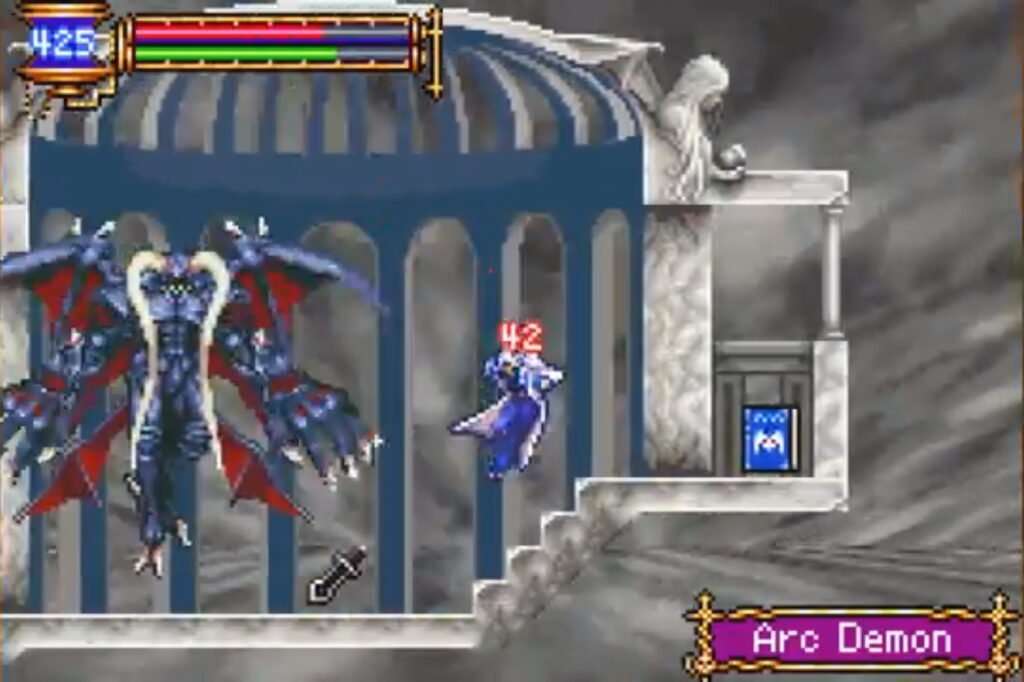 Difficulty: Medium – Clone of the previous two games in term of design and difficulty. Not much new to say here.

Story: Very high marks in the area. At first we think we are seeing what might be the “end” of the Castlevania legend, only to have new elements of plot open before our eyes.

Originality: While very strong in the storytelling department, there’s little else that’s brought to the table in terms of originality. We do have the new soul system, but the overall feel and design of the game is slowly getting a bit stale.

Soundtrack: Pretty decent stuff here. But nothing that particularly stood out to me in terms of composition.

Graphics: This title represent GBA perfection. This game is step above the previous two titles. The anime avatars are crisp and colorful, the backgrounds are lovely and well done.

Playcontrol: Again, flawless execution. No delay, or other annoying glitches.

Value: Copies of this game are getting tough to find in retail stores. But thankfully, it’s usually available online for around $20-$30 – a decent price.

Overall score (1-100): 85 – While lacking in some areas, the story really sucks you in and keeps you hooked. It’s maybe not the most original title in the series, but it probably is the best of the three GBA entries and offers hours of entertainment.