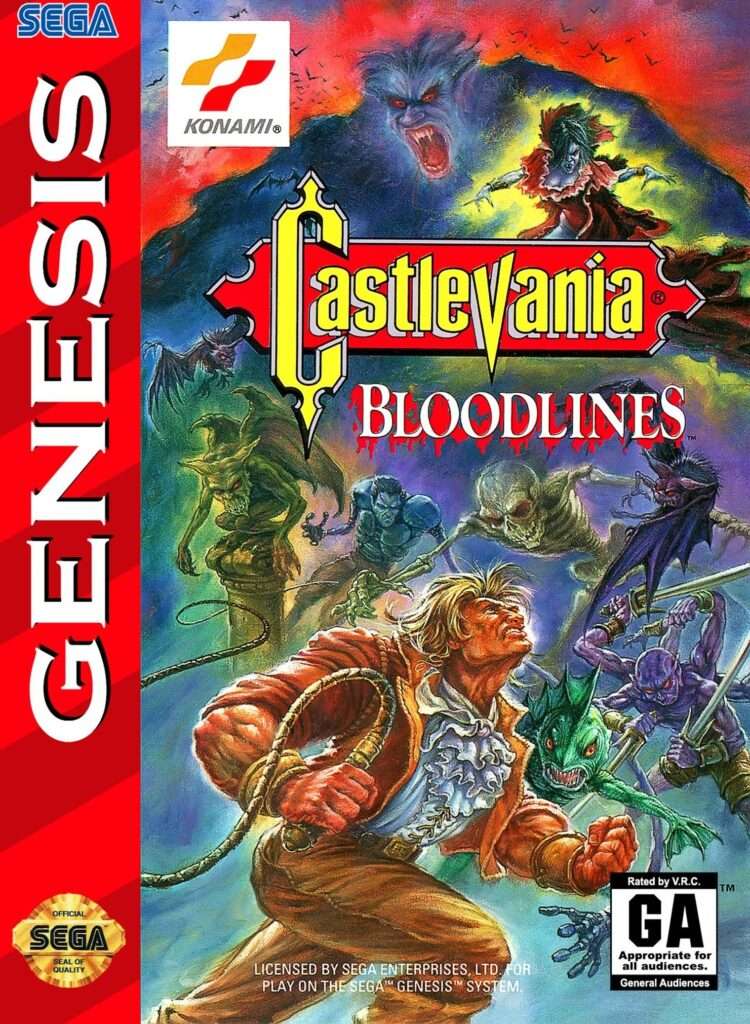 For this installment in my Castlevania review series, I’m going to talk about a rather obscure chapter in the history of Castlevania. Today, I’m going to discuss Castlevania Bloodlines. If you’re a Castlevania fan who’s never heard of this game, don’t feel bad. This title was only released on the Sega Genesis and never received very much promotion. As a result, for many gamers it never landed on the radar. Personally, I never played this game as a kid. So this playthrough is my first experience with the title.

The storyline for this game is rather interesting. This entry in the Castlevania series tries to tie the lore behind Bram Stoker’s original Dracula into the official Castlevania canon. The game takes place in 1917, a couple of decades after the events of the Dracula novel. You can choose to play as either Jonathan Morris (son of the Dracula character; Quincey Morris), or a strange spear-wielding vampire hunter known as Eric Lacarde. (Often believed to be Alucard is disguise… although this is not officially confirmed in the game in any way).

It is through some unknown twist of events that Morris has come into possession of the legendary Vampire Killer whip. And when the evil countess Elizabeth Bartley tries to resurrect the soul of her uncle Dracula, Jonathan takes up arms to stop her. The general consensus among Castlevania fans is that the Morris family is a branch-off from the Belmont family. Hence the game’s title: Bloodlines. 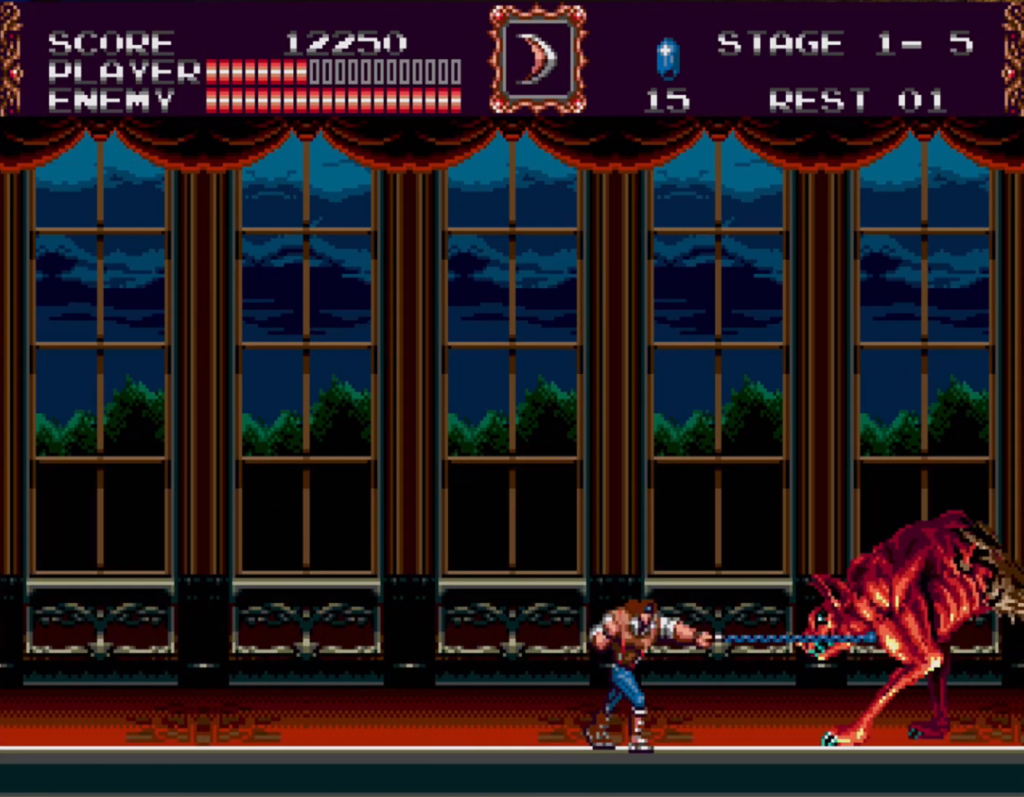 The game starts at Castlevania itself, but when the player learns that Bartley has fled the scene, you must chase her all over war-ridden Europe – finally catching up with her in London. (Just in time for the final showdown with the newly resurrected Count Dracula.)

As far as the gameplay experience goes, fans of the series know what to expect by now. What impressed me most about this title wasn’t the actual gameplay, but the level design. Many of the stages in this game are based off various real-world locations. The background artwork and visual effects are very well done (especially for the Genesis). This gives Bloodlines a very unique look and feel among other games in the Castlevania series.

Despite the way the game’s art direction impressed me. Something about the graphics themselves just don’t feel right to me. The graphics on the Genesis, while just as good as the SNES, seem to feel a little off. I can’t quite pinpoint it. But it’s there. Also, for the most part, I found the soundtrack to be somewhat lacking compared to other recent entries in the series. 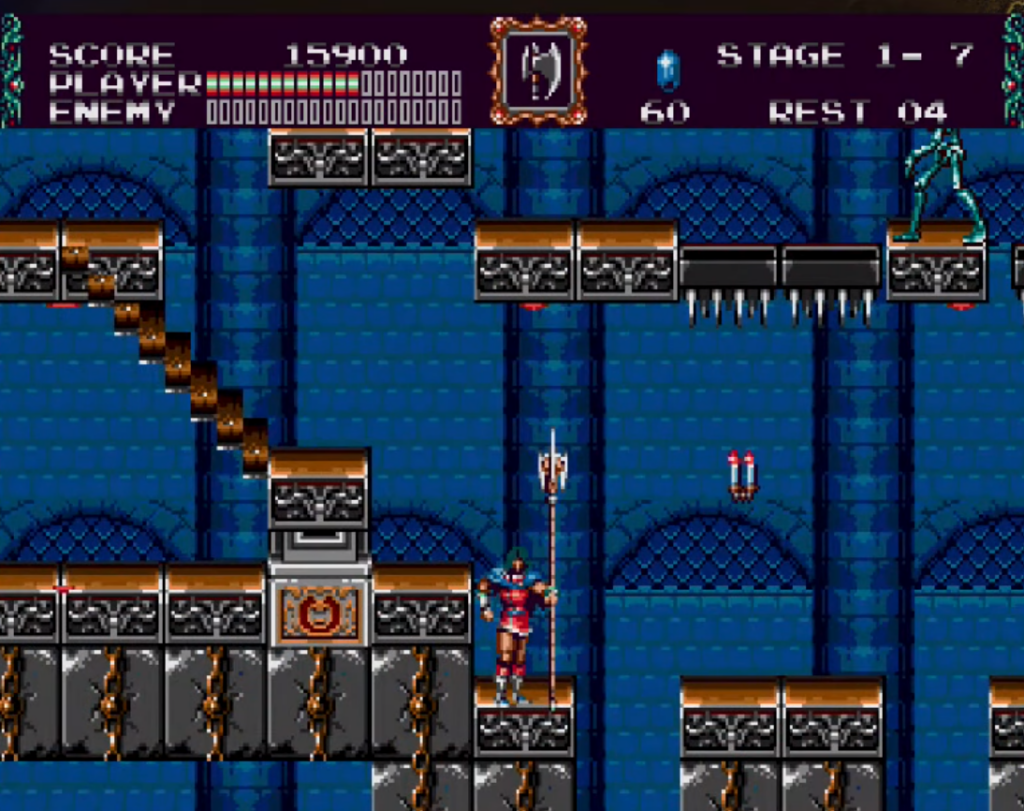 In my opinion, the first and the last level in the game are by far the best. Other areas with their rotating staircases, and warped/upside down levels were fun at first, but in the the end seemed more about showing off the 16-bit power of the Genesis, than about any actual gameplay value. All that aside, on its own, I think Bloodlines is a solid title – but perhaps a little overshadowed by the legacy of the franchise itself. At this point, I think it is safe to say that the formula is starting to get stale. 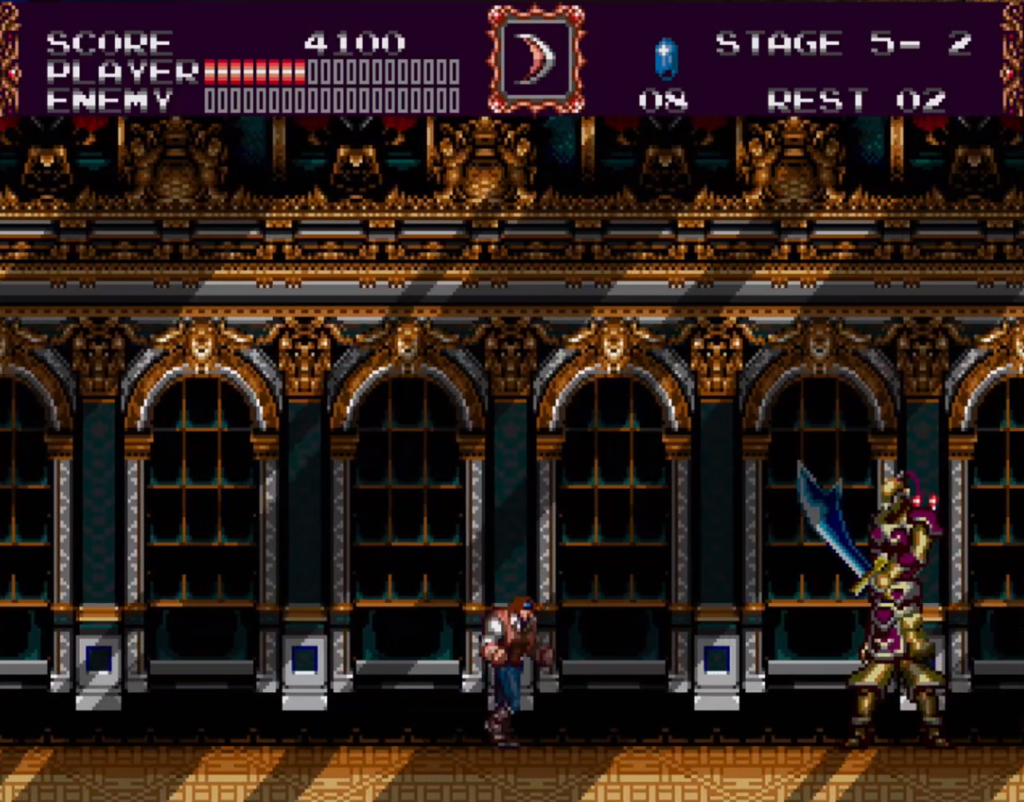 Version Reviewed: Sega Genesis
Difficulty: Medium – This game is very similar to Rondo and Super Castlevania in terms of difficulty. By now, if you’ve played through the other games, there’s not much that will surprise you.
Multiplayer: No.
Story: This title is unique for its attempts to link Bram Stoker’s vision of Dracula to the Castlevania series. Most of the game takes place during World War I, and countess “Bartley” is really based on the real life Elizabeth Bathory. Credit to Konami for taking this interesting step in the series lore.

Originality: Aside from the story elements and the historical settings in the game, there’s really nothing new brought to the table with this title.

Soundtrack: This soundtrack is pretty mediocre in my opinion. The new music in the game is not very attention-grabbing in my opinion. The few throwbacks that are included sound watered down. I’m wondering if perhaps the soundchip of the Genesis was a bit more limited than the SNES. That may be the problem here.

Fun: The game is itself is sadly more of the same. But I did take some enjoyment seeing the design of the various European-based levels. The game takes you exotic locations such a Greece, Germany, and Italy. Many of the token landmarks for those locations appear in the levels, which is a nice touch.

Graphics: Visually on par with most other titles of the 16-bit era. Perhaps, maybe even a bit sharper than the SNES titles. It seems like the designers took a lot of time in the presentations of the game stages. High marks here.

Playcontrol:  The controls in this game feel a bit wonky. I think this may be by design but I cannot be sure. There is a definite difference in the feel of the two lead characters. But many of my deaths were the result of a misplaced jump that just didn’t really feel misplaced. — That being said, I have to confess I do not own a Genesis. Therefore, I have to admit that I was relying on an emulator for this title. My problem with the playcontrol could be nothing more than bad emulation. So take anything I say here with a grain of salt.

Value: At the time of this writing there is no digital version of the game available. Players looking to get their hands on physical copies of this game are going to pay collector’s prices. Honestly, unless you’re a serious Castlevania fan, this game isn’t worth shelling out a lot of money for.

Overall score (1-100): 60 – While not the worst game in the series, this was one of my least favorites so far. While it is undoubtedly “Castlevania” – something didn’t feel right and I can’t really put my finger on it. I do think that the stage-by-stage concept of the Castlevania series was starting to grow old by this point.