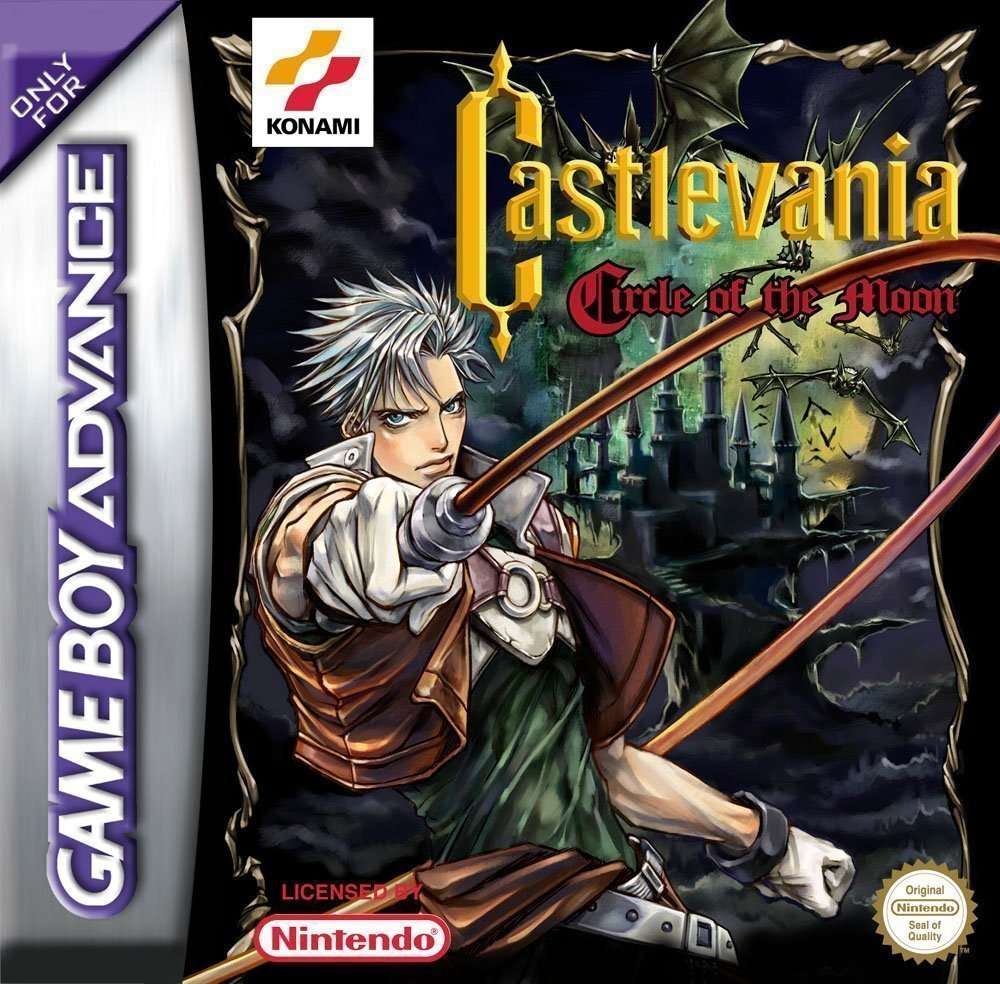 The next entry in the Castlevania saga is Circle of the Moon. Released in 2001, this game, for a time, was removed from official chronology by the director of the Castlevania series. It has since been re-added due to the release of more recent title Portrait of Ruin. The details behind this are convoluted and I’ll cover it fully in a future post.

This title is the first Castlevania game released for the Game Boy Advance. It is similar in looks and style to Symphony of the Night, but much more difficult. As this game shows, the GBA has proven to be an excellent platform for the series.  Circle of the Moon is the first of three games designed exclusively for the Nintendo handheld, and all three are perfect fits. 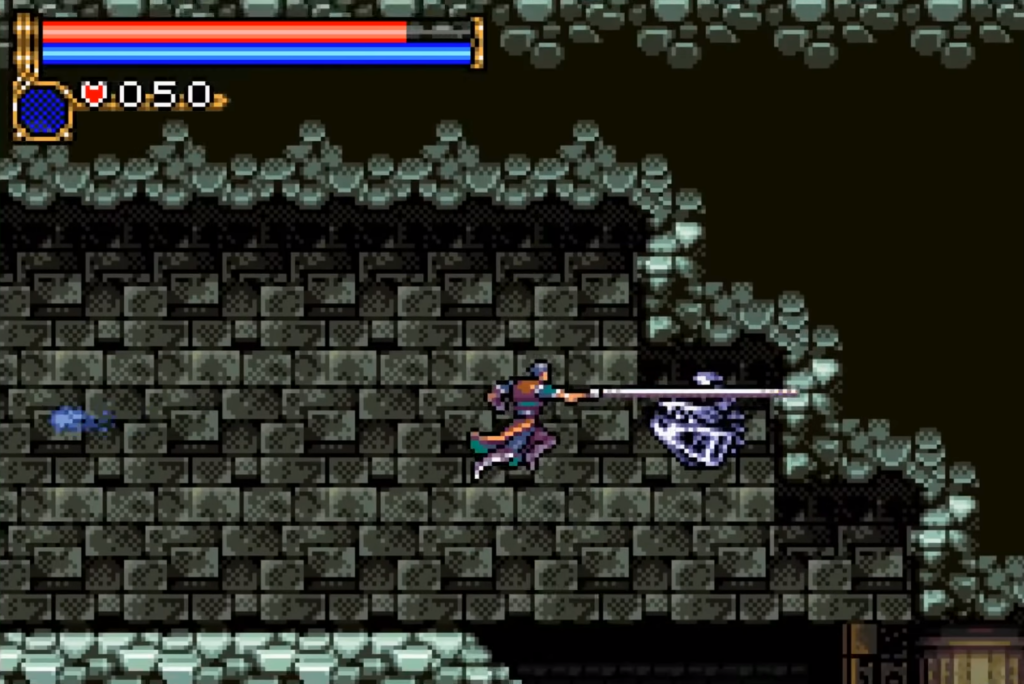 The storyline for the game takes place in 1830 where master vampire hunter Morris Baldwin has arrived on the scene of Castlevania with his son Hugh and his apprentice Nathan Graves.

They discover that Dracula’s minions have successfully resurrected the count outside of his one hundred-year cycle. But before the heroes can lift a finger to slay the weakened Dracula, the count springs a trap and a Nathan and Hugh fall tumbling down into the caves beneath the castle.

Being the apprentice hunter, Nathan declares his desire to ascend to the top of the castle to both rescue Morris and defeat Dracula. Hugh slaps him down and tells him to stay out of the way. He intends to find his father alone, rudely declining any offer of help. As a result, Nathan is left alone with only the Hunter Whip to defend him.

From here, the game plays out like another “castleroid”. You play Nathan as he navigates the various areas in and around Castlevania. Throughout the game there are few chance encounters with Hugh, who seems to be blinded by his lust for power and revenge. Of course, there’s more to the story than initially meets the eye and over the course of the game, they player will uncover all of the behind-the-scenes details. 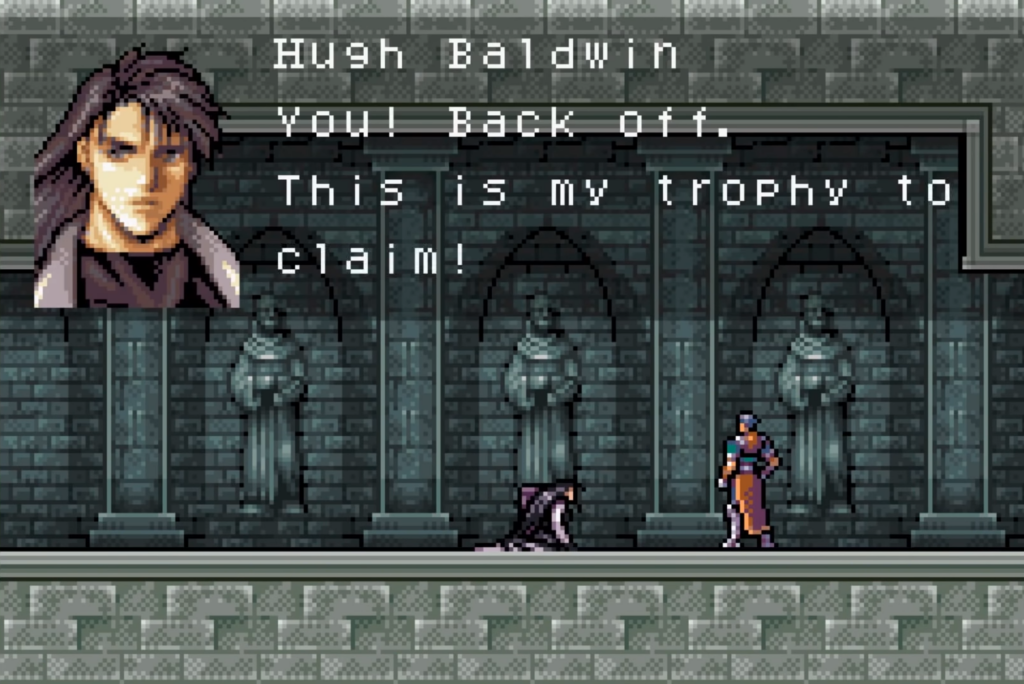 By and large, this game works very similar to Symphony of the Night. However, one major way this game differs is with the with the introduction of something called the “DSS system”. This is just a fancy way to describe Circle of the Moon’s new ability-based game mechanic. Essentially it works like this; over the course of the game, the player collects magic-infused cards that drop from defeated enemies. The cards are sorted into two types: A deck and B deck.

You can combine one A and B type card to create a special effect or ability. For example, two particular cards, when combined, will give your character a Flaming Whip that increases your attack power. Some of the cards also allow you to summon mythological monsters, which in turn grant character buffs or deal damage to enemies. Many of the more powerful cards are difficult to find, but they make the game much easier, so they are worth the effort to uncover.

As is often the case with Castlevania titles, after completing the game there are alternate modes that players can enjoy. This time, instead of being able to play as an alternate character, a number of “restrictive modes” are unlocked. These modes of play are as follows:

All in all, Circle of the Moon is a pretty typical Castlevania game. It’s atmospheric and chock full of monster-whipping fun. But when looked under the microscope, there’s not much originality in the storyline. And one is left wondering just who the hell these characters are! What has happened to the Belmont family? How did Morris and Hugh come into possession of the enchanted whip? Fans would not receive an answer to these questions for many years… 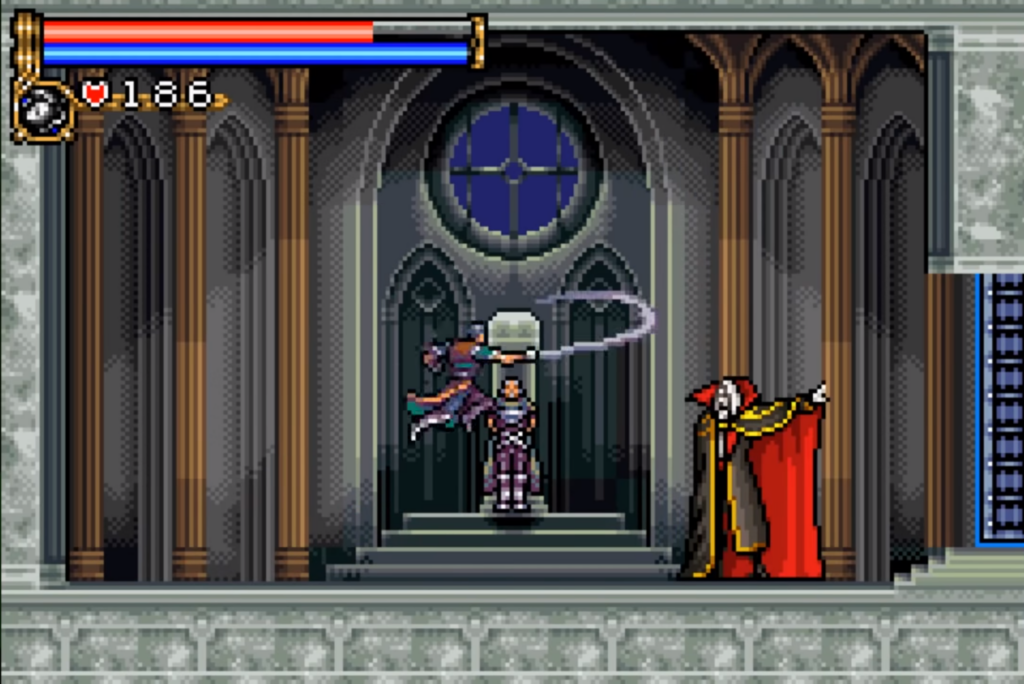 Story: The storyline between this new band of hunters is interesting, but doesn’t seem to fit in well with the rest of the saga. For a long time this led to confusion among many fans. Thankfully, everything is eventually explained in a later game.

Originality: While borrowing many elements from SotN, the devs did take steps to make this game unique. The DSS system is a nice touch and I really enjoyed the depth that went along with such a mechanic. But overall, I don’t think it really took off with many fans.

Soundtrack: The soundtrack here is well done. The music is appropriate for the game, but not very memorable in my opinion.

Fun: The game itself was a lot of fun for me. It’s fantastic to have the gameplay of SoTN be able to fit in your pocket. The atmosphere is perfect, very creepy stuff at the beginning of the title really sets the mood. I enjoyed it quite a bit.

Graphics: Very similar in design to SotN, but not quite as crisp. The backgrounds as pretty impressive, but some of the character models could be better.

Playcontrol:  No real problems here. If playing, I do recommend playing on either a Game Boy Advance SP or one of the 2nd gen DS system. The frequent use of the shoulder buttons cramped my hand back in the day when playing on the original GBA. But on the whole, I have no complaint. The controls function as I would expect and are very precise.

Value: Copies of this game are almost impossible to find in stores today. But thankfully, it’s usually available online for around $20 – a more than fair price.

Overall score (1-100): 85 – All in all, Circle of the Moon is a pretty solid game. Fans who are into the lore of the series may be a bit confused about the game’s setting. But in the end, the gameplay is what matter. Personally, I think this is a great title and a must-have for any CV fan with a Game Boy.