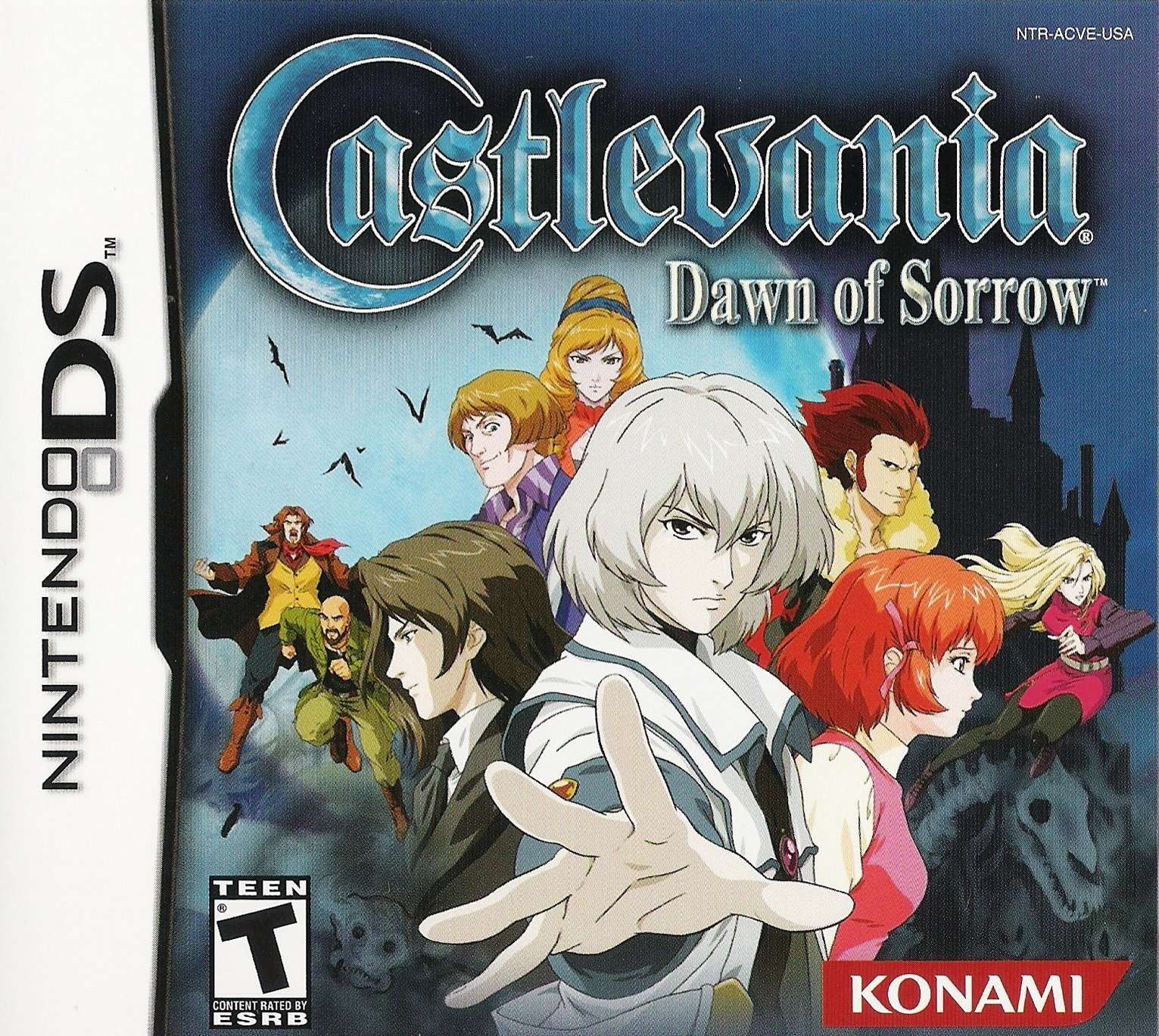 Finally, we have the first Castlevania title for the Nintendo DS: Castlevania: Dawn of Sorrow. As you may have guessed from the name, this game is a direct sequel to Aria of Sorrow for the GBA. It takes place one year after the events of Aria. The rundown is a bit like this;

(Spoiler alert for Aria of Sorrow)

Soma has lost the majority of his powers with the passing of time. He is also now the target of a cult that is hellbent on destroying him so that they can bring about the resurrection of the dark spirit that he keeps trapped in his body. In order to bait him, Soma’s girlfriend Mina is abducted and used to lure him to the cultist’s hideout. Soma must journey into their lair (which is a replica of Castlevania), all the while re-awakening his slumbering powers. During his quest he encounters potential candidates whom hope to receive his power upon his defeat. One-by-one Soma must overcome them, ultimately facing-off against the final and most cunning candidate in hopes of defeating the spirit of Dracula once and for all. 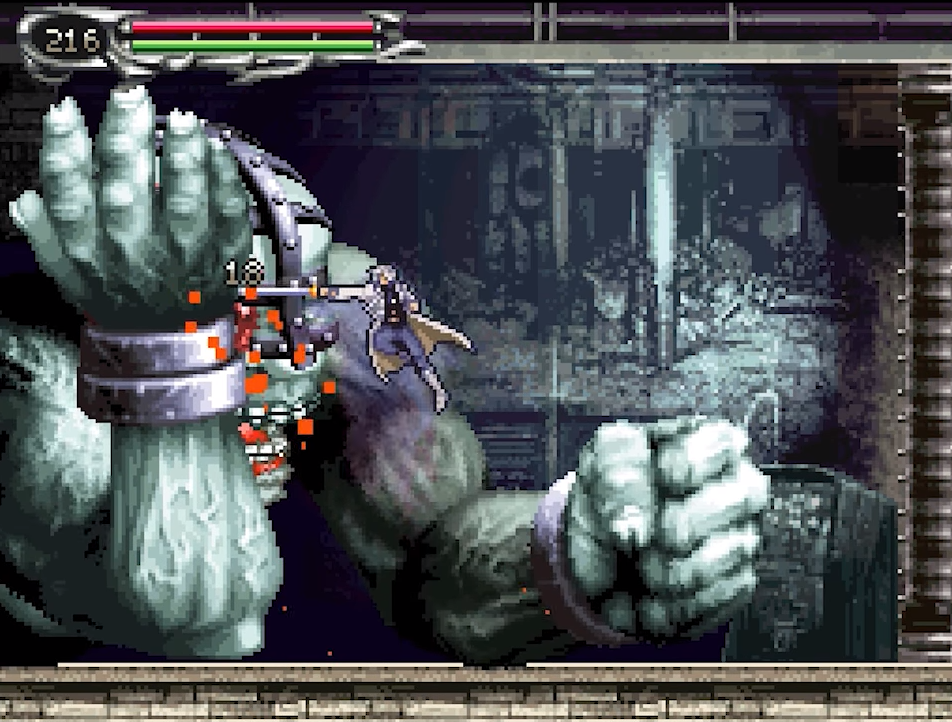 In many ways, this game is very similar to it’s predecessor. The graphics are familiar and the game has the same overall feel. The dual-screen configuration of the Nintendo DS allows for one screen to be a dedicated map and equipment area, while the game action takes place on a separate screen. The most innovative and also the most annoying aspect of this game is the “Magic Seal system”. At the end of every boss fight, Soma must seal away the evil spirit by tracing a magical glyph into the air. The glyph is a predetermined symbol inside of a pentagram. Once players see the glyph traced out on the screen, they need to physically replicate it using the touch screen and stylus. This sounds quite clever on the surface, but the problem is, it is VERY touchy and sensitive. Many boss fights were failed simply because I had to keep re-doing the seal at the end of the battle.

Aside from my gripes about the Magic Seal system, this DS proved to be a very innovative way to play this type of game. Having a second screen open at all times that allows the player to simply glance down at the in-game map is incredibly helpful. On top of that, Dawn of Sorrow also features a multiplayer functionality that allows two players to compete in a race of sorts to see who can clear segments of the map first. In truth, this addition is a bit gimmicky, but it still adds value to the game. Features like the wireless multiplayer and the touch screen really sell the value of the DS. 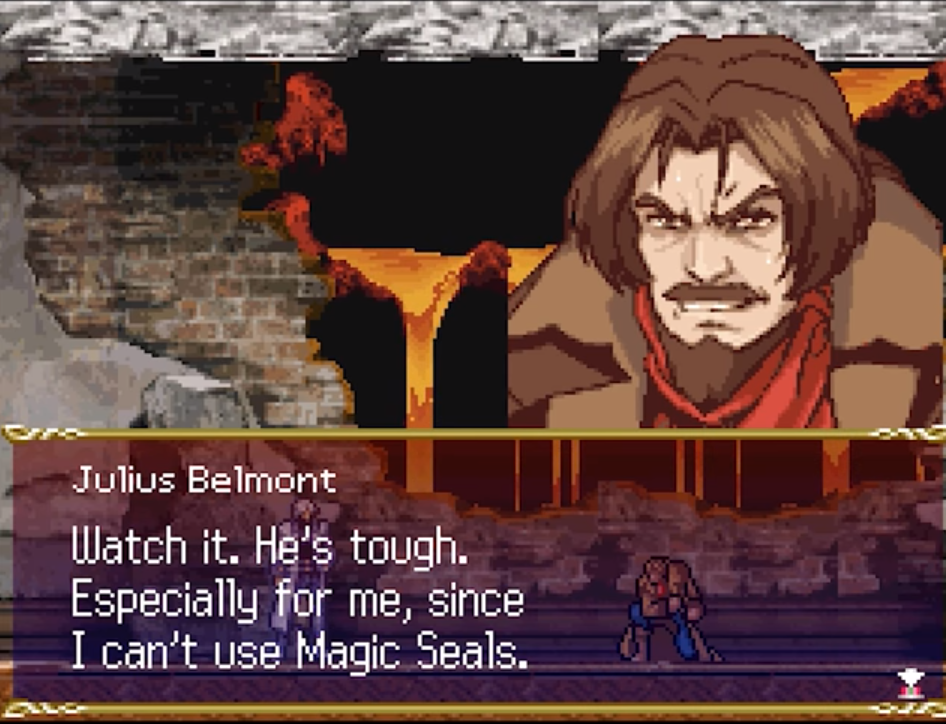 All in all, I found this game to be extremely enjoyable, even if it was mostly a clone of Aria. The puzzles are interesting, and the graphics are a step up from the previous handheld Castlevania games. Somehow, the overall playcontrol even seems to be a bit of an improvement over the previous entry. However, my main complaint remains that stupid magic seal/touch screen function. Silly. 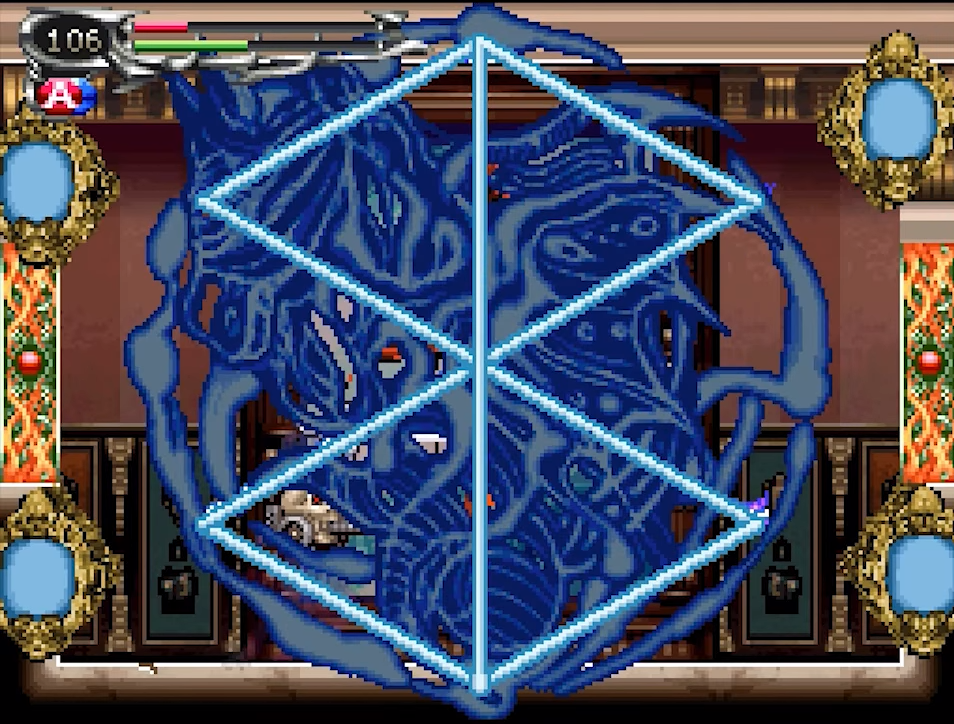 Difficulty: Hard – I found this title to be a little tougher that the last few “castleroids”. As noted above, the magic seal system is tricky and this led to a lot of initial frustration. Overall, the bad guys just seem to have a bit more bite to them than they did in Aria.

Story: More good stuff here. We finally get to see the epic conclusion to the Dracula saga. I was very pleased with the amount of thought put into the backstory here, it wasn’t just something the developers threw together to sell a game.

Originality: The dual-screen design is about what you would expect. Again, the magic seal system is a bold and innovative move. I’m not too sure how well it actually worked, but they get big points for trying.

Soundtrack: Excellent! The sound system of the DS is a big improvement over the GBA and it really shows. This title feature some new original music, all of which I enjoyed.

Fun: Overall, this is a pretty fun title. There are some really tough boss fights and that darned seal system frustrated me a bit. All that aside, this is a very enjoyable title.

Graphics: The best handheld Castlevania so far (except for maybe the Rondo remake on PSP). Keeping with the anime art-direction, everything is crystal clear and well colored. I was impressed.

Playcontrol: The overall play control is pretty spot on. However, the touchscreen sensitivity was bit extreme. To trace those magic seals just right, you need to have a very steady hand. There’s not much room for error. I’m not sure if this is by design or if it’s just due to over-sensitivity from the touch screen.

Overall score (1-100): 90 – This is a definite must-play for a number of reasons. First of all, it is the end of the main Castlevania storyline. It’s also the features some pretty innovative game mechanics, wireless play, and the return of some beloved characters. What more could you ask for?