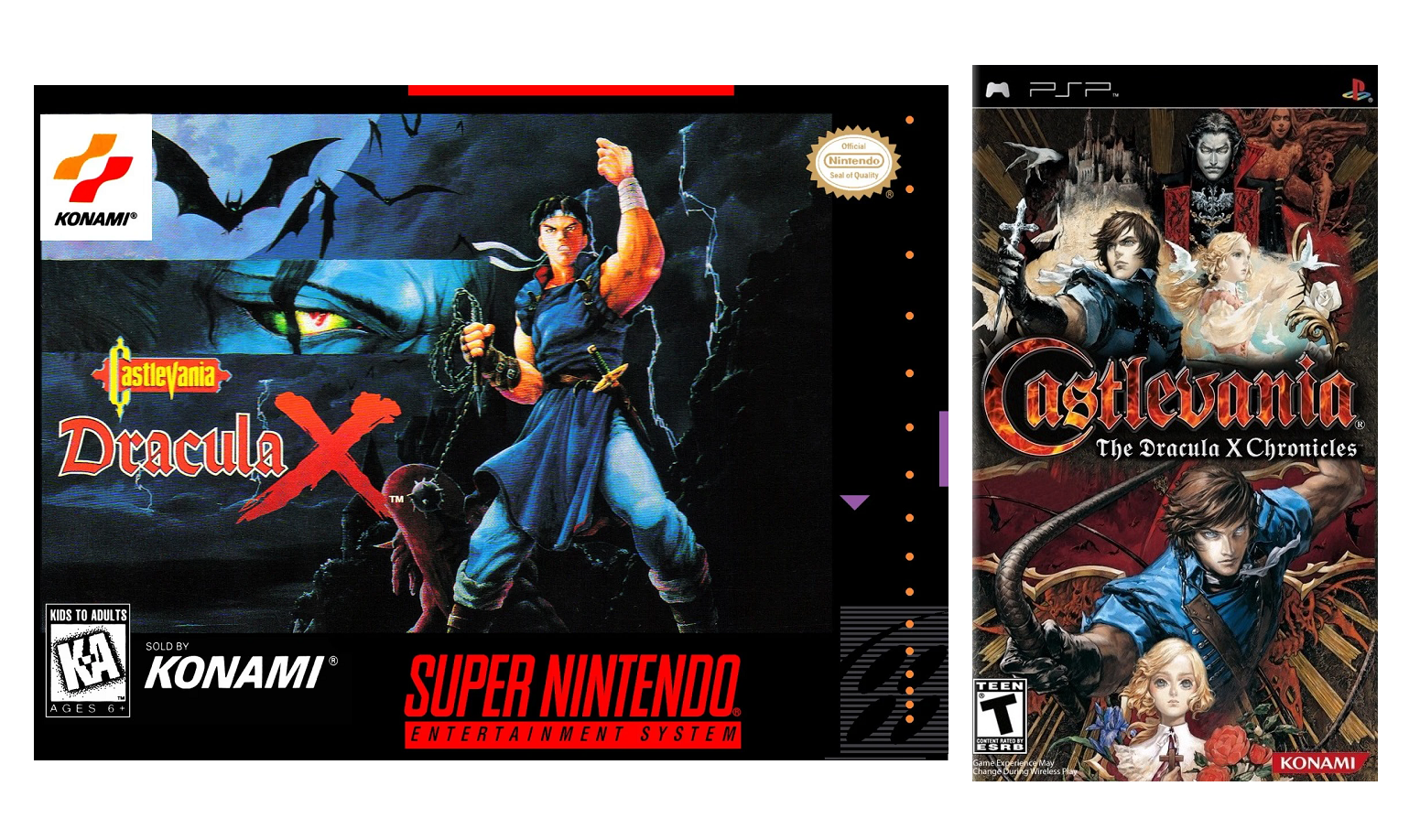 The next stop in my Castlevania series playthrough is the mythical “Rondo of Blood” (also known as “Vampire’s Kiss” in the UK). This game was originally released on the TurboGrafx-16, a system I never had any experience with growing up. Long hailed as one of the best Castlevania games of all time, I was always very curious about it, but never actually got my hands on it.  Shortly after the original release, a watered-down version of the game was made available for the SNES, this one I did play. But it was common knowledge that when compared to the original version, it left a lot of be desired. For the longest time I’ve really wanted to get my hands on the original version. Recently, a remastered version of the original game was released on the Playstation Portable; Castlevania: The Dracula X Chronicles. My wife was kind enough to buy this game for my birthday a few years ago, and I’ve loved it ever since.

For the purpose of this review, I sat down with all three versions of the game to take a good look at each individual rendition. But, I will go ahead and cut to the chase right now – The Dracula X Chronicles is the way to go. I say this for a few reasons. First, it is a complete retelling of the original game and it easily available for purchase. In fact, I daresay it is the definitive version of Dracula X. For purists, or those curious about the original TurboGrafx16 version, it is available on the Wii Virtual Console and also as an unlockable option on The Dracula X Chronicles. At the time of this writing, the SNES version is not available digitally.

The story for this game takes place about a hundred years after the events of Castlevania II. An evil cult leader named Shaft resurrects Dracula using a dark ritual. Hungry for vengeance against humanity, Dracula sends his undead armies to decimate the countryside of Transylvania. During the attack, his minions come across a young girl named Annette, who is the betrothed to Richter Belmont, the hero of the game. Dracula recognizes this connection and orders her locked up in the tower of Castlevania as bait for Belmont. As you might expect, Richter takes up his family’s ancient whip and makes his way towards Dracula’s castle.

The Turbografix version of the game features a really neat anime-style opening movie. The PSP remake also includes some pretty incredible introductory cutscenes. Both versions do a great job setting up the backstory for the game. The SNES version however, still relies on the game manual to fill in any gaps.

For the most part, this game plays much like Castlevania 1, 3, and 4. Most levels are fairly straightforward, with a boss at the end. The goal is to reach Castlevania itself and ascend your way to Dracula’s chamber. What makes this game a bit different is that it contains hidden levels and unlockable content. For example, on one level, you can obtain a key that will open a locked gate. By entering the locked area you will encounter a little girl; Maria. Once you have freed her, she actually becomes a playable character. Well, let me clarify, she is playable in every version except the SNES release…

For eagle-eyed fans, there are some really nice throwbacks tucked away in this game. For example, the first level takes place in a burning town. For those that have played Castlevania II, it is a location might look a bit familiar; the town of Aljiba (the last city before reaching Dracula’s castle). Obscure, but a nice example of Konami’s attention to detail.

Regardless of which version you play, the game handles quite nicely. Of the two characters, Maria is much easier to control, as she is faster and her attacks have a longer range. However, she is not as strong or powerful as Richter – so there’s a trade-off. There are three other maidens that you can rescue as well. Finding them is not always easy, but doing so is the only way to receive the true ending of the game. I had a lot of fun combing each level trying to find all the secrets that are tucked away. (Aside from the maidens, The Dracula X Chronicles also has a few more bonuses to uncover. By doing so, you can also unlock the original version of Rondo, and Symphony of the Night – this game’s direct sequel.)

As I played through the different versions of this title, I found myself having a very good time. This is even true for the SNES version of the game. On its own, the SNES release isn’t bad. In fact, it’s probably as good as Super Castlevania. But when compared with either the original Rondo or the PSP remake, it ends up being the black sheep of the bunch.

Of the three, The Dracula X Chronicles was hands-down my favorite version. It takes the look and feel of the original game, but mixes it with some modern upgrades. The soundtrack was very impressive, and the unlockable content kept me exploring.  The dialogue in both versions is essentially the same, and the levels are nearly identical. The biggest differences come in the form of the cutscenes and the unlockables.

I really can’t say enough good things about the title. If you’re a Castlevania fan, this is a game you should make a point to play. The PSP version is my number one recommendation. But, if you don’t have a PSP, go snag a copy of the original on the Virtual Console.

Difficulty: Medium – Compared to the other games in the series, Dracula X is a bit tamer. While, still challenging at times, the PSP version is not quite as hair pulling as the older titles. I cannot say the same for the old SNES or TG16 versions, there were considerably tougher to complete, but still easier than other games in the series. If you’re a completionist, finding all the hidden extras may present a bit of a challenge.

Story: Again, we have the simple “Dracula has returned set-up”. But unlike previous titles, we get to see a little more detail into the backstory.

Originality: A familiar Castlevania style – but with some new touches that really go a long way. The most fun for me was finding the hidden zones and characters.

Soundtrack: As far as the PSP version goes,  the audio TOP NOTCH. The best soundtrack in the series thus far. Both the TG16 and the PSP version offer CD quality audio, but the PSP release does feature some more interesting mixes. New songs, series throwbacks, it’s all here.

Fun: I had a ball playing this title. In fact, it might be my favorite in the series so far. There’s a little something for everyone in this title.

Graphics: The PSP version is phenomenal. It’s definitely a testament to the hardware. At the time of its release, the original version was also top of the line. Even the cheapened SNES release really pushed the limits of what that system could do. However, it goes without saying, the Chronicles version of this game is the best looking by far.

Playcontrol:  Regardless of version, the control are precise and well implemented. Oddly enough, the PSP version is probably the most awkward. I’m not a fan of the button layout on the classic PSP models (which is what I have), but it was still comfortable enough for longer sessions.

Value: The PSP version is available for about $20-$30 through most retailers, while the Virtual Console release of the original game will run you about $10. Considering that the PSP release actually contains a total of three games (the remake, the original, and Symphony of the Night), the PSP version offers the best value.

Overall score (1-100): 90 – This is one of my favorite Castlevania games. This title represents the end of an era for the series. As I’ll discuss in my next review, Rondo of Blood ended up being the capstone to the classic Castlevania experience. I can’t recommend this game enough.