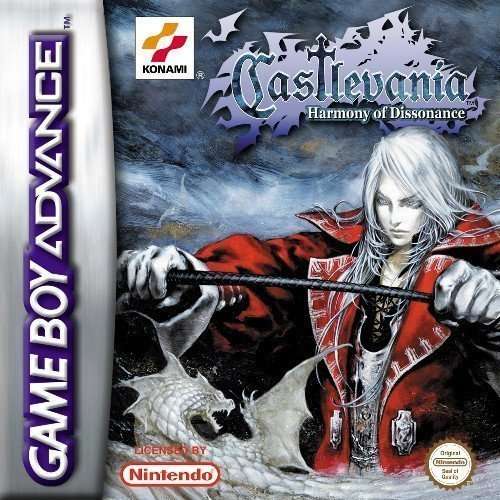 The next stop on the Castlevania series is another GBA title; Harmony of Dissonance. This is a review that I’ve been EXTREMELY excited to write because this game is actually a direct sequel to Castlevania II – Simon’s Quest – One of my favorite games in the series.

The game features the character of Juste Belmont, Simon’s grandson. Two years before the events of the game, Juste’s companion Maxim vanishes while on a journey of self enlightenment. One day, Maxim finally returns, but in terrible shape. He tells Juste that he has learned their childhood friend Lydie has been kidnapped and taken to a strange castle. The two of them travel to the castle (which suspiciously looks a lot like Castlevania). Juste tells Maxim to rest by the entrance while he enters the castle in search of Lydie. 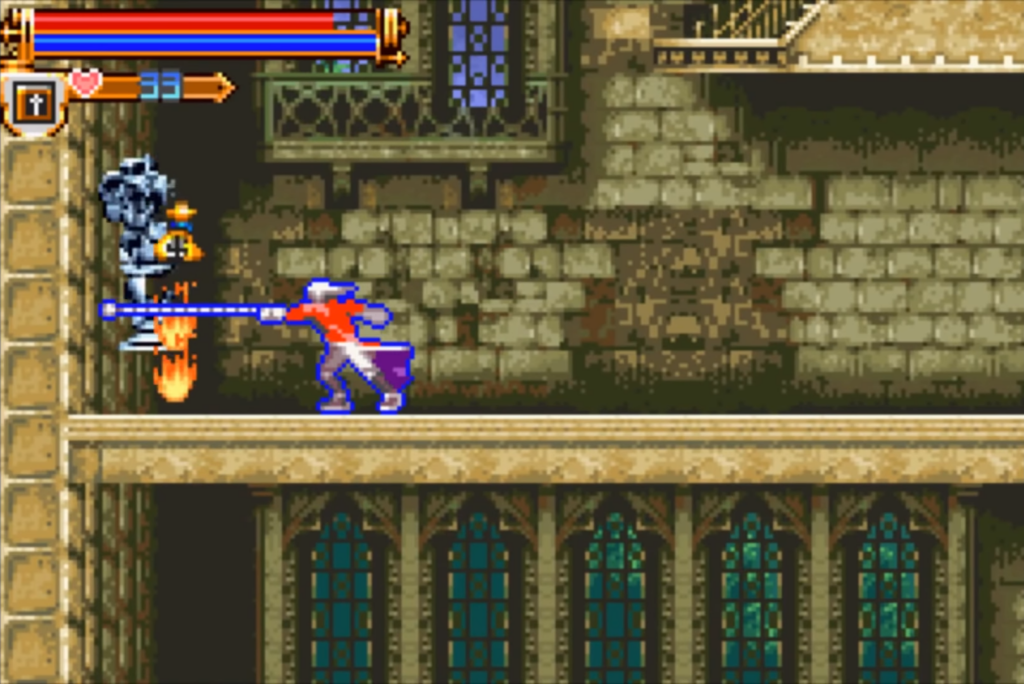 As the story unfolds, it is learned that in an effort to prove himself a worthy vampire hunter, Maxim followed in the footsteps of Juste’s grandfather, by finding the various remains (or relics) of Dracula in an attempt to resurrect him and in turn, defeat him. By doing so he unwittingly became possessed by Dracula’s spirit and summoned Castlevania back into the material world.

During Juste’s quest in the castle he meets up with The Grim Reaper on more than one occasion and learns that in its transient state Castlevania currently exists both in the material world and spirit world, and only by conquering both will be be able to overcome the dark spell placed on Maxim.

As you might have figured out, this is just another spin on the whole “inverted castle” mechanic found in Symphony of the Night. But even though it’s a rehash of sorts, it actually works quite well in this title. 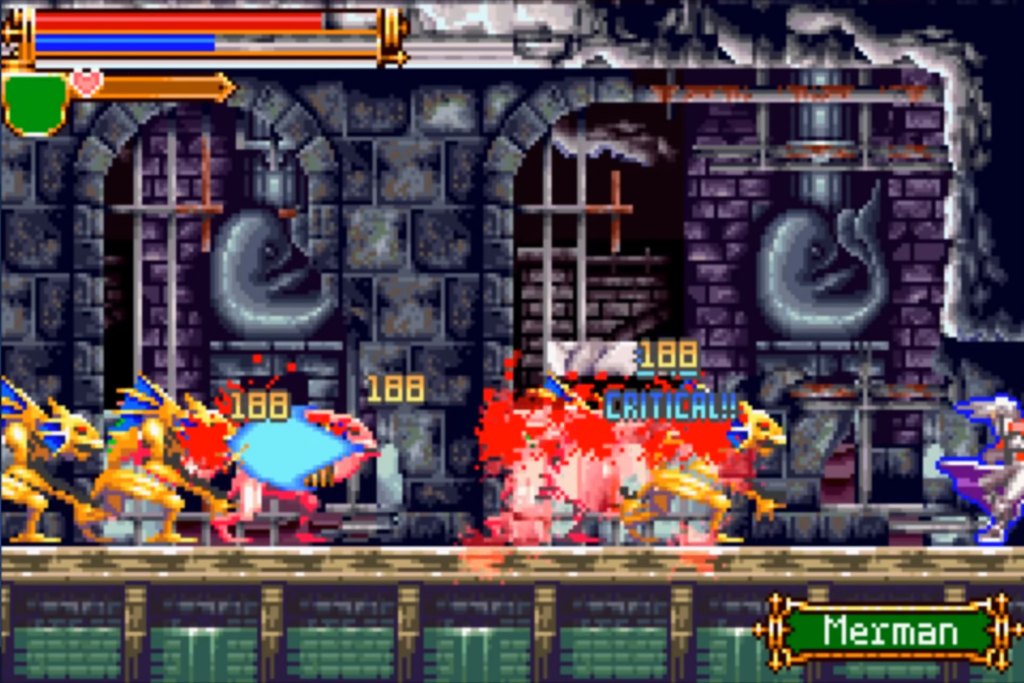 All in all, this title is similar to both Symphony and Circle of the Moon. Despite being a direct sequel, the atmosphere bears no resemblance to Simon’s Quest whatsoever. In fact, other than collecting Dracula’s relics, there is little outside of the storyline that connects the two games. While somewhat of a disappointment in that regard, the game is still very enjoyable. This is a title that I have played through a few times, and I found myself enjoying it just as much this go-around.

Once the game is beaten there a few unlockable features. You can playthrough the game again as Maxim or participate in a Boss Rush mode – both of which are nice touches.

Graphically, the game is a step up from Circle of the Moon. But sadly, the music is subpar. While not terrible, its definitely not what I would expect from a Castlevania title at this point in time. 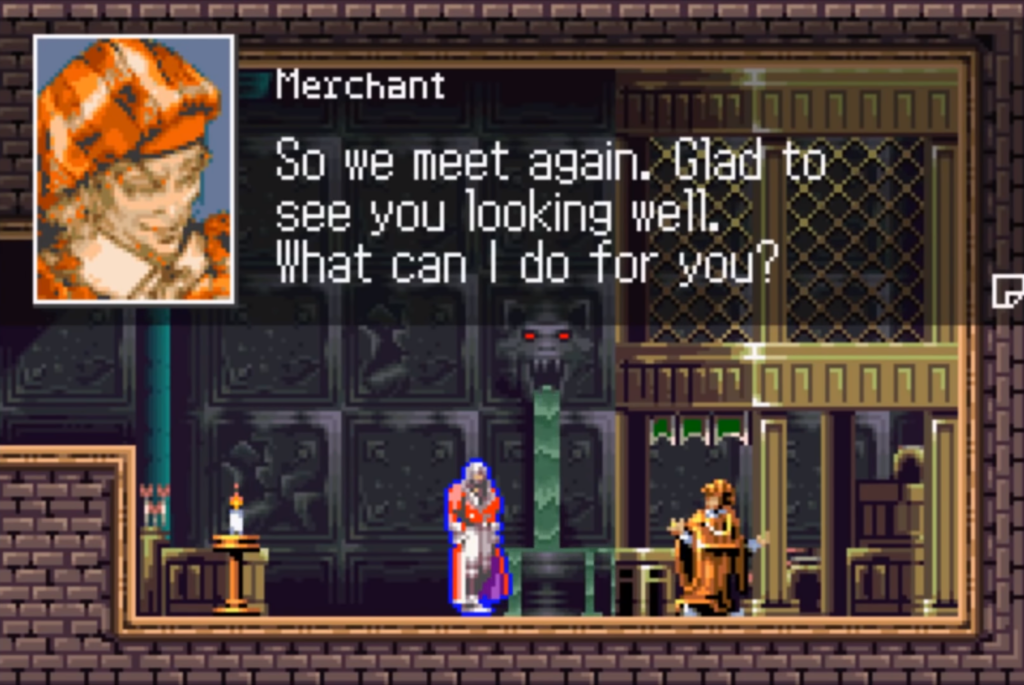 Difficulty: Medium – This title is very similar to SotN in terms of difficulty. Overall fairly easy in terms of challenge. The real test lies in the player’s willingness to explore and discover every nook and cranny.

Story: Somewhat similar to Circle of the Moon, but with a more familiar set of characters. From a lore standpoint, this game includes some nice tidbits about the nature of Castlevania itself.

Originality: This game’s plot is sort of a cheap throw-back to Circle of the Moon in regards to the two main characters. On top of that, it’s another SoTN style “castleroid”. Not much new to see here.

Soundtrack: Not the best I’ve heard. The songs here are very strange and unearthly. While that does create a certain atmosphere, they sadly, are just not very good.

Fun: Despite some of my above complaints, the game is a lot of fun. I really enjoy these “castleroid” style games. This is no exception. Playing through this title is a great way to pass some time.

Graphics: A bit of a step up from Circle of the Moon. Very colorful and impressive scenery. Juste has that strange glow about him that some fans find annoying. But in reality, this was done to make the game a bit easier to see on the original non-backlit GBA hardware. Personally, this never bothered me.

Value: Copies of this game are getting tough to find in retail stores. But thankfully, it’s usually available online for around $20-$30 – a decent price.

Overall score (1-100): 80 – This is a solid Castlevania title. There’s not really anything new to see, so it doesn’t really stand out in a lineup with the other titles. But still, it makes for a worthy handheld entry.