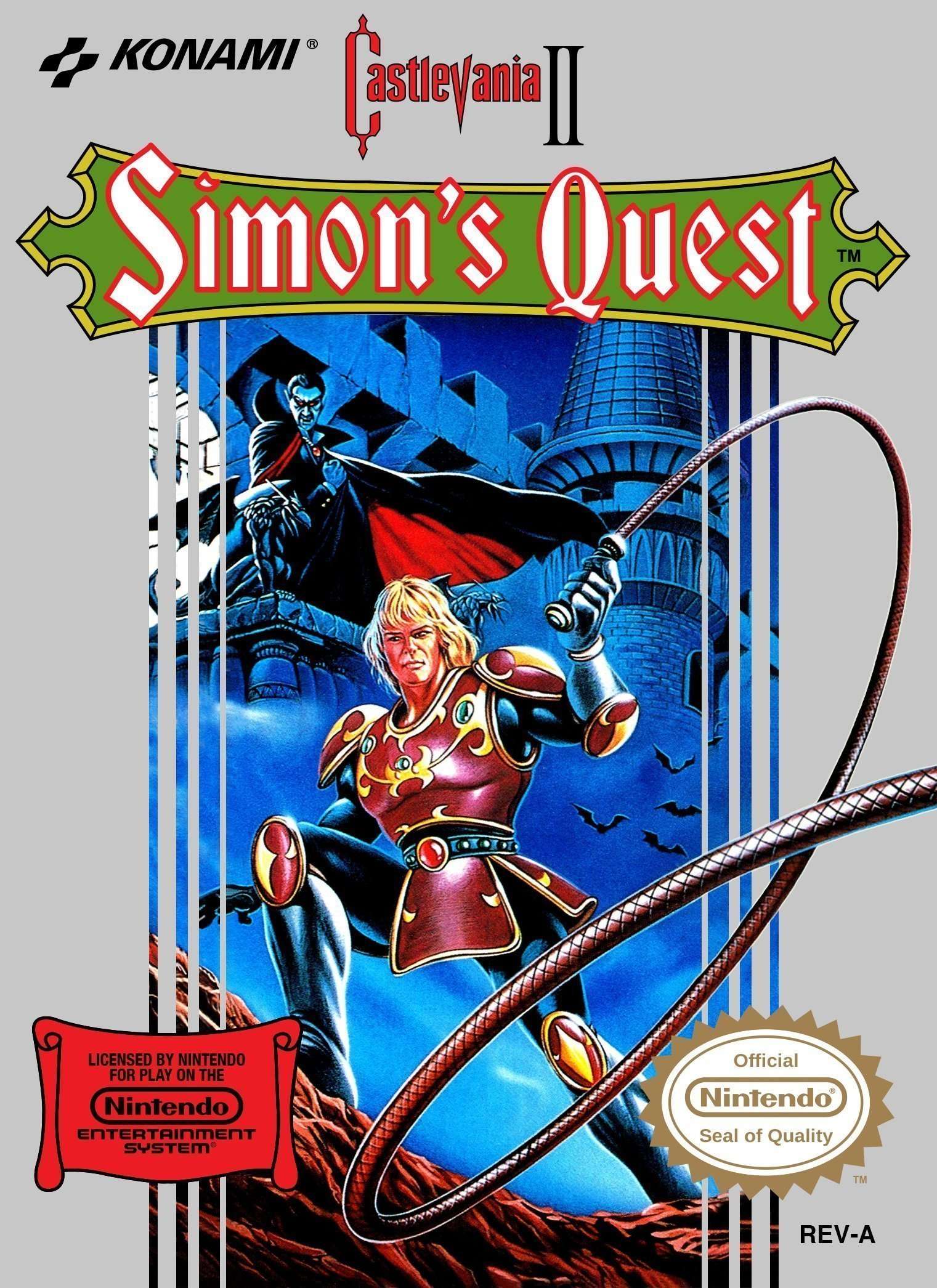 Back for the next installment of the Castlevania playthrough and review. As one might predict, the success of Castlevania brought a sequel. However, it is not what you might expect. Castlevania II is not merely an update to the original stage-by-stage platformer. It is something altogether different.

The game takes place seven years after the original. In this story, we learn that during his battle with Dracula, Simon was inflicted with a curse. As the years have gone by, the curse has slowly weakened him. Through his research, Simon learns that the only way to break the curse is to gather the remains of Dracula, return them to Castlevania, and burn in accordance with an ancient ritual. 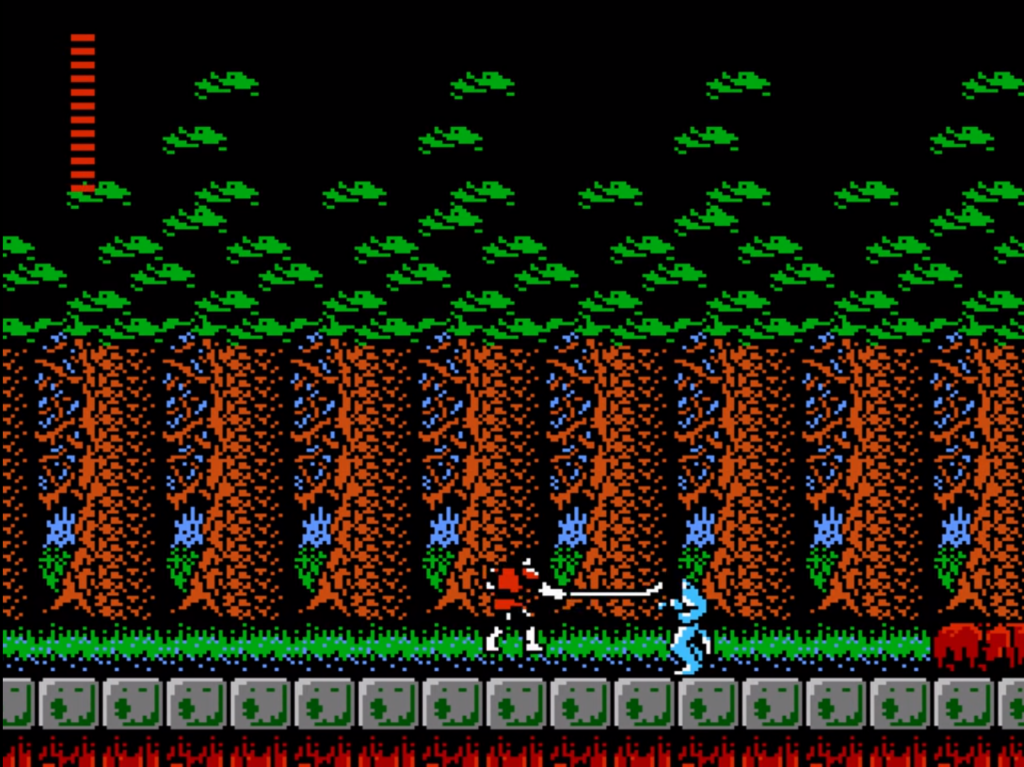 Instead of being thrust right into the action, this game begins quite different then the original. This time around, Simon starts his quest in a town. Here, Simon will interaction with NPCs who often provide some insight into his quest. Some give valid clues, while others send Simon on wild goose chases. Simon must use this information to uncover the location of various haunted mansions that are scattered throughout the countryside. These mansions house the relics of Dracula that Simon must collect in order to complete his quest. These relics consist of: Dracula’s Rib, Heart, Fingernail, Eye, and Ring. Each relic grants a particular boon when collected. For example, the rib can be used a shield, while the fingernail increases the damage Simon can deal to his enemies.

For the most part these relics are easy enough to collect. To do so, Simon must make his way to depths of the mansion and strike a crystal ball that contains the item with an Oak Stake. In most cases, it is as simple as that. However, two of the relics are guarded by mini-bosses: Death (aka: The reaper) and Carmilla’s Mask. In reality, both of these battles are laughably easy. Defeating these bosses also earns Simon a special item or weapon.

Aside from collecting relics, Simon can also gather various other objects: magic crystals, holy water, and garlic, to name a few. Simon can also upgrade his whip multiple times, ending with a Whip of Flame. By the time the game is over, Simon has visited multiple towns and is geared to the gills with an arsenal of weapons and items. 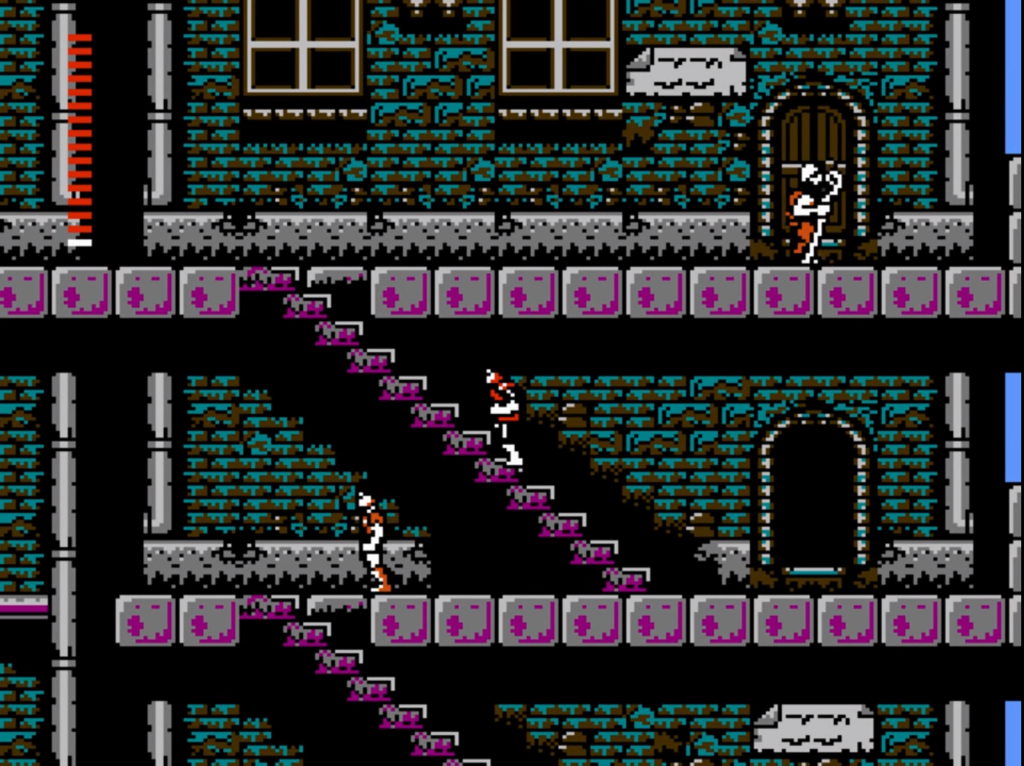 One of the more unique aspects of this game is the Day/Night system. As Simon travels around the land of Transylvania, time continues to pass and the game distinguishes between night and day. During the day, enemies are weaker and more sparse. But at night, they are stronger and harder to defeat.

This time around, Castlevania itself is a cinch to navigate, in fact, it is empty. There’s not a single monster in the whole castle until Simon reaches the end and sets the relics on fire. This spawns a ghostly version of Dracula, that if you let it, will fly around the room and attack Simon. However, in another example of how ridiculously easy this game is, Simon can continually toss a holy flame at Dracula, both immobilizing him and damaging him at the same time.

Once defeated, you are treated to one of three endings. In one ending, both Simon and Dracula perish in the fight. It mentions that the Belmont family will continue to hunt evil for many generations to come. In the second, Simon wins, but eventually dies from his wounds nonetheless. In the third and true ending, Simon wins and lives a long healthy life, but in classic horror movie form, the players then see Dracula’s hand erupt from the ground by his gravesite. Hinting that the Prince of Darkness will one day return.

All in all, and despite its faults, I love this game. It holds a lot of dear memories for me, and will always be a favorite of mine. As kids, my old buddy and I were nuts for it. We couldn’t wait for the weekend when I’d sleep over at his house so we could stay up all night and play this thing. We wanted to see all the endings and figure out what all the strange and mysterious items were for.

Despite all this, the game has some major shortcomings. The translation is just atrocious, and the game itself is way too short, and ridiculously easy. You can sit down and play thing from start to finish in a couple of hours if you know what you’re doing.

The Castlevania series ends up having a pretty convoluted timeline, so to keep things understandable, I’m going to help track the games for those that might not be familiar, I will amend this list with each review: 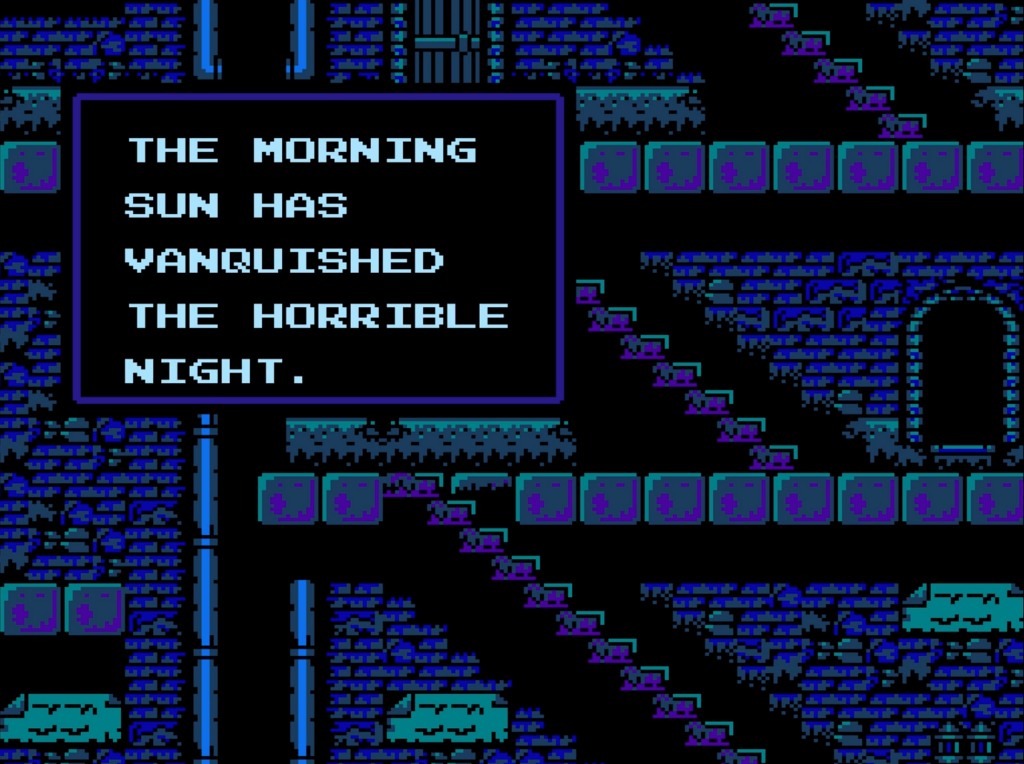 Difficulty: Easy –  This game is not very difficult at all. Perhaps at the very beginning there’s a bit of a challenge until Simon has grown in strength, but if you don’t go wandering too far you’ll have no real trouble. Monsters are stronger at night time, but not by a very noticeable degree. Some of the mansions feature fake floors that will plummet you to your death, etc. But their locations can be detected by tossing some holy water on the floor.

Story:  I like the concept of Simon being inflicted by a curse and having to resurrect Dracula in order to break it. One might expect a simple “Dracula has returned!” plot, so this is a nice treat. Aside from that, there’s not much lore that unfolds in the game. Some of the locations are named roughly after certain areas of Romania and Transylvania – which is kind of cool, but it has no bearing on the game itself.

Originality:  This is certainly not a rehash of the first game. The development team took a big risk by making the sequel radically different. As a result, opinions on the game are split. Personally, I love it. I think it makes for a refreshing experience.

Soundtrack: If you ask me, the music in this game is the pinnacle of NES beeps and bloops. Great stuff, I still hum it today whenever I think of the title. Some of the classic melodies from the Castlevania series started right here.

Fun:  For me, this game is a great way to spend an evening. It has a more serious tone than the original in some ways, which I enjoy. It also is a bit more atmospheric. Honestly, this is probably my favorite of the 8-bit NES Castlevania games. But, despite my love for Castlevania II, I can admit it has some issues that many gamers are likely to despise.

Graphics:  The graphics here are very different than the original. I consider them to be a slight improvement, but they certainly don’t represent the best the NES can do. One observation I have is – if there’s a lot of action on the screen, this game will occasionally choke up and the graphics will glitch out. But in terms of aesthetics, I do not have any complaints. Good 8-bit artwork.

Playcontrol:  A big improvement over the original. Simon feels much more flexible and easy to control. Switching between equipment is pretty simple and painless. Everything is precise and responsive as it should be.

Overall score (1-100): 85 – While this title is a favorite of mine, it received a lot of criticism during its time. Many fans of the original Castlevania were turned off by the difference between the two games. Also, this is game is WAY easier than the original. I personally feel that the boss battles should have been a bit tougher than they are. Also, many of the puzzles in the game are bit unusual and don’t make much sense. (Thank god for Nintendo power, or many of us would still be trying to figure out what to do with the red crystal.) Regardless of these issues, I love the game. It’s one of my all-time favorites