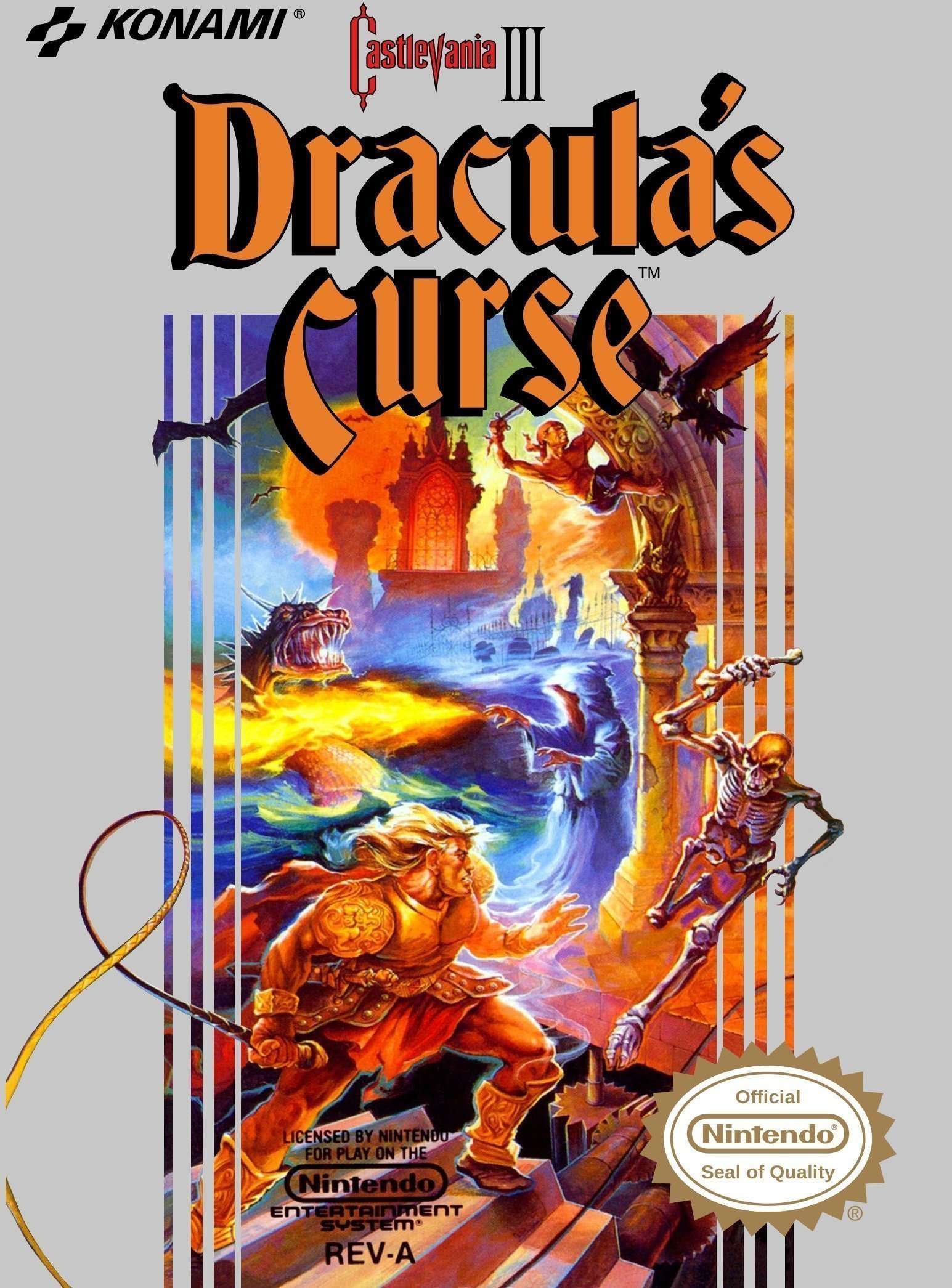 Finishing off the original trilogy is Castlevania III: Dracula’s Curse. Despite its name, this game actually serves as a prequel to the first two titles in the series. For this game, Konami decided to go back to their roots, thus distancing Castlevania III from the gameplay elements found in Simon’s Quest and making it more like the first installment of the series. In fact, the gameplay in this title is nearly identical to the original Castlevania. Both the level-design and music hearken back to that first installment as well. But, even with all of the throwbacks, there’s plenty in this game that’s new.

Before diving into the specifics, let’s take a look at the storyline. In this title, you play as Trevor Belmont, one of Simon’s ancestors. After years of exile due to their Supernatural powers, the Church calls upon the Belmont family to return to Transylvania and rid the countryside of Dracula’s evil legion. Trevor is eager to find favor with the local folk and accepts the request. 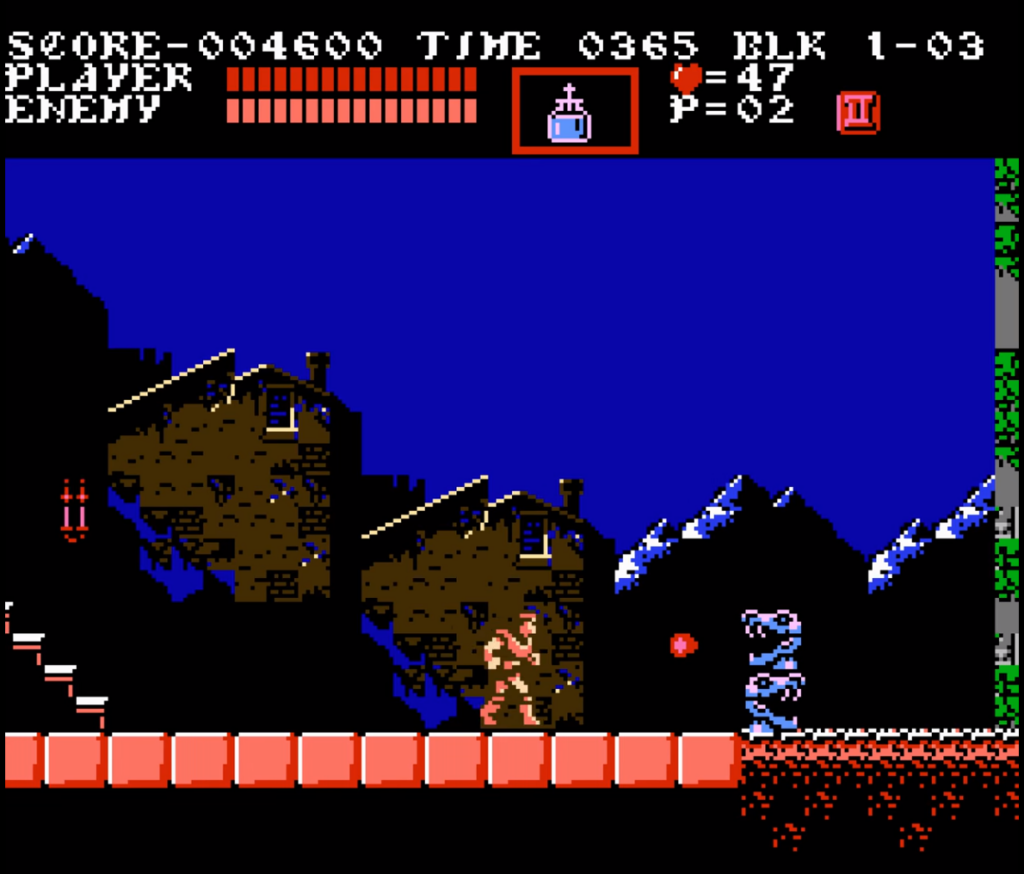 While Trevor is the main hero of the game, depending on which path you take (yes there are multiple routes to the end of the game) you may also encounter the following other playable characters: Grant the pirate, Sypha Belnades (a female vampire hunter), and Alucard, the son of Dracula. Each character has their own unique attacks and style. Some characters are better suited for specific levels, so it’s up to the player to experiment and  determine which to use.

Graphically, the game is one of the best that the NES had to offer; moving backgrounds, detailed textures, etc. Sadly, a bit of the art in the game was subject to heavy censorship for the American release. Some of the religious iconography was toned down and several nude statues in the background were edited to cover any “offensive parts”. The Japanese version also contained a special music chip that offered some incredibly enhanced sound. Sadly, due to budget restraints, the American release did not contain this chip.

The biggest drawback to the game is its level of difficulty. Even with a password system in place, that allows players to save their progress, the game is damn hard. As is always the case with Castlevania games, there is a strategy to many of the bosses in the game. But even so, the levels themselves can sometimes be downright maddening. But, strategy or not, many of the fights just seem almost unfair. For example, in the final fight with Dracula, he has three forms. Each giving him a full bar of energy, while the hero only retains his single bar through the entire battle. To make matters worse, in most boss fights, all it takes is three hits and Trevor is out. 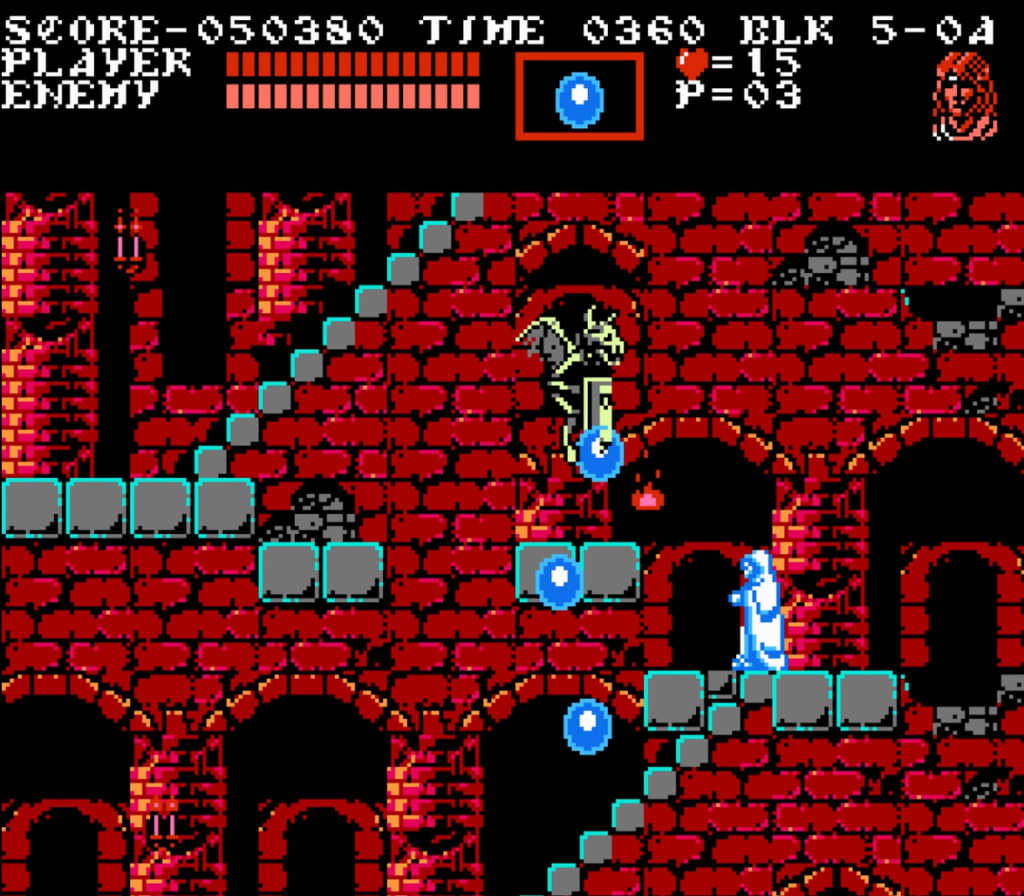 Everyone who plays this game has their own opinion on which characters to select and therefore, which level path to take. During my playthrough for this review, I collected Sypha, and then Alucard. Alucard comes in handy making it through many of the later levels, but I always turn to Trevor when it comes to winning the final battle.

All in all, this is a good installment in the series, but I do believe it is a little TOO hard for most. For this reason, ultimately it may not be enjoyable for some players. 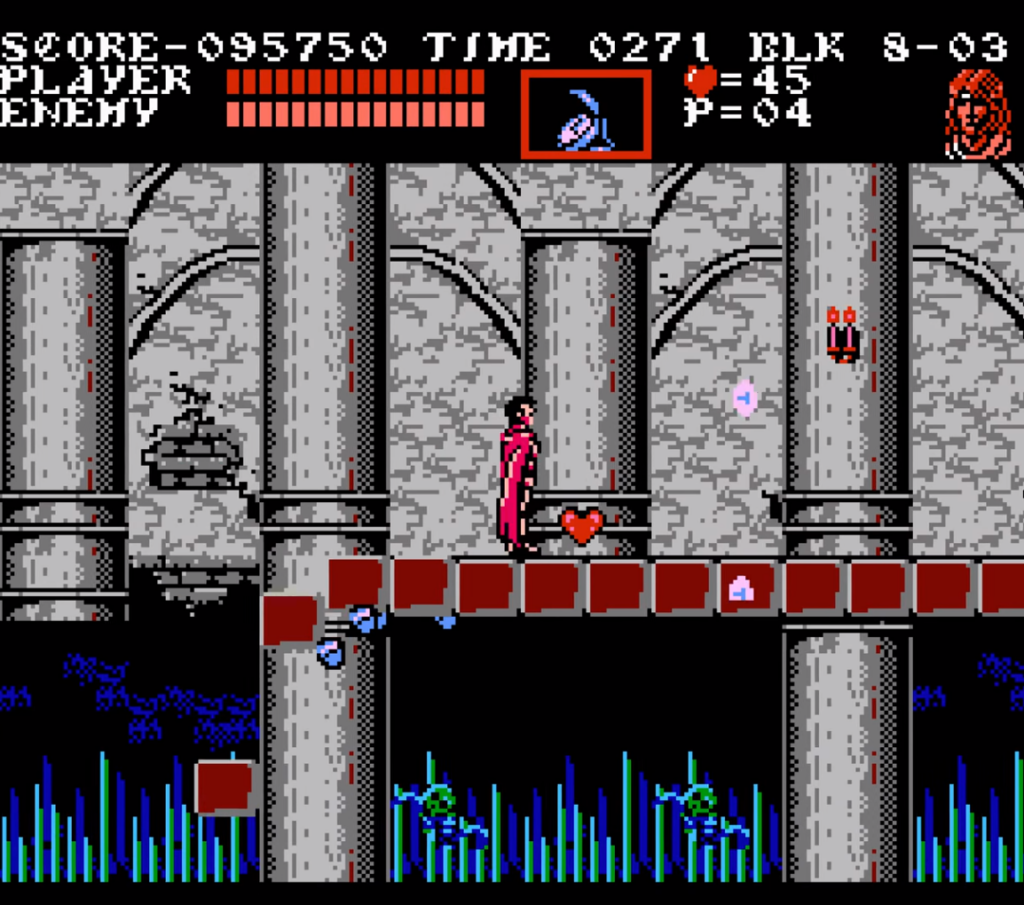 Difficulty: Very Difficult – These days when people talk about difficult games, they often use the phrase “Nintendo Hard”. This game is an example of “Nintendo Hard”. If you die, you start the level over. You get three chances to complete the level. That’s it. A well known cheat for this game, is entering the phrase “Help Me” as your character name at the start of the game, doing this gives you a few more tries per level. But, even with that enabled, it’s still much harder than most casual players are ready for.

Story: Konami takes things backwards by giving us a prequel. I found that to be an interesting idea at the time the game was released. We are also introduced to Alucard, a character that becomes very important in future Castlevania titles. While still a bit shallow, the back story of the game does begin to lay the groundwork for what the series is eventually going to become.

Originality:   CV3 is a throwback in many ways to the original. However, Konami manages to keep it fresh by giving us optional levels to explore and offering alternate characters with various strengths and weaknesses.

Soundtrack:  The grooves in this game are up to par with the series so far. The Japanese version of the game included a slightly improved soundtrack. But there’s not enough difference between the two games to make the US version undesirable.

Fun:  This game has a lot of fun and appeal. I enjoyed the scenery of the various stages and characters, but after a while the challenge tends to become frustrating. Trying to get through the last stage AND beat Dracula on three lives begins to seem like much more trouble than it’s worth sometimes.

Graphics:  This was a title that came out late in the life cycle of the NES and it shows. At this point, game designers had really learned how to push the NES. Castlevania III represents some of the best art you’ll see in an 8-bit era game.

Playcontrol:  Much like the first title, Castlevania III seems a bit stiff at times. Your character will meet more than one death due to poorly placed jumps. It takes a little time to get used to the feel of things. Switching characters seems to change this a bit, so I assume this is by design. With this in mind, I can accept it for what it is.

Overall score (1-100): 80 – When many people think of classic Castlevania, this is the title that comes to mind. It’s a definite upgrade to first game. And part two of the series was so radically different, that it’s hard to make a comparison. Aside from being frustrating at times, this is a great title. For many, it served as the introduction to the series.