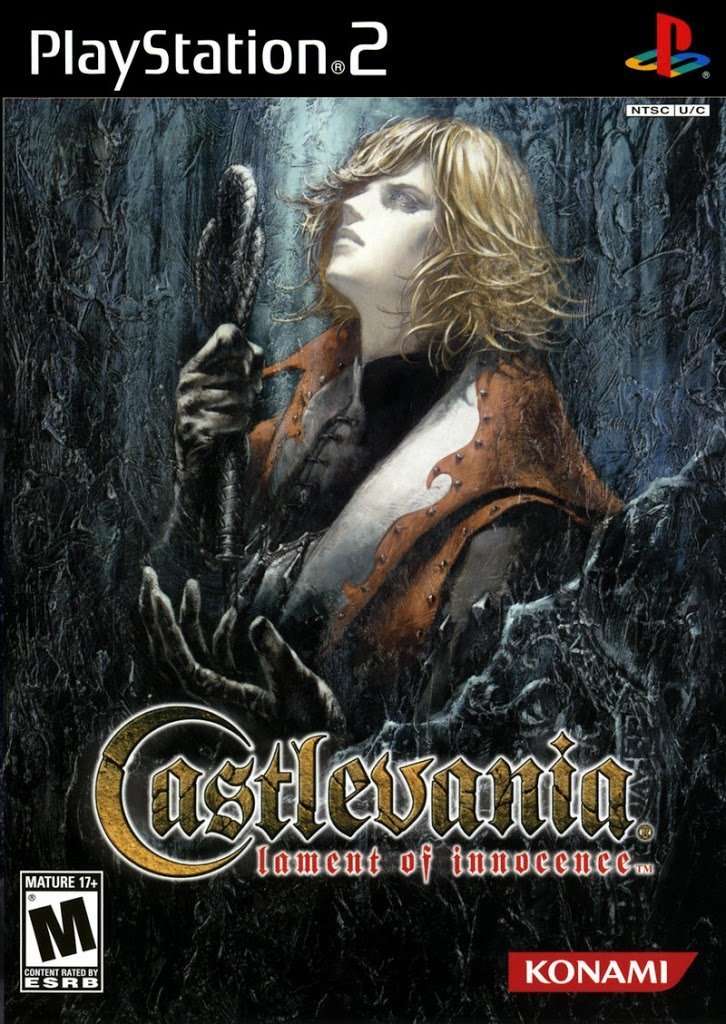 Finally, we have a change of pace in the Castlevania series! Once again, Konami decided to make an attempt at a 3D Castlevania game. The result is Lament on Innocence for the PS2. Chronologically the first Castlevania title, this game shows the earliest Belmont ancestor and explains the origins of Dracula – all in wonderful 3D-style graphics.

The game does boast impressive graphics for the time. It also includes voice acting, and a fully orchestrated soundtrack. At the time of release, the in-game rendering and the CG cutscenes were top notch.

The backstory of the game is extremely detailed. It features two Knights of the Crusade; Leon Belmont and Mathias Cronqvist. The game follows the story of these two knights and their mission to save their homeland from the invasion of a powerful vampire known as Walter. 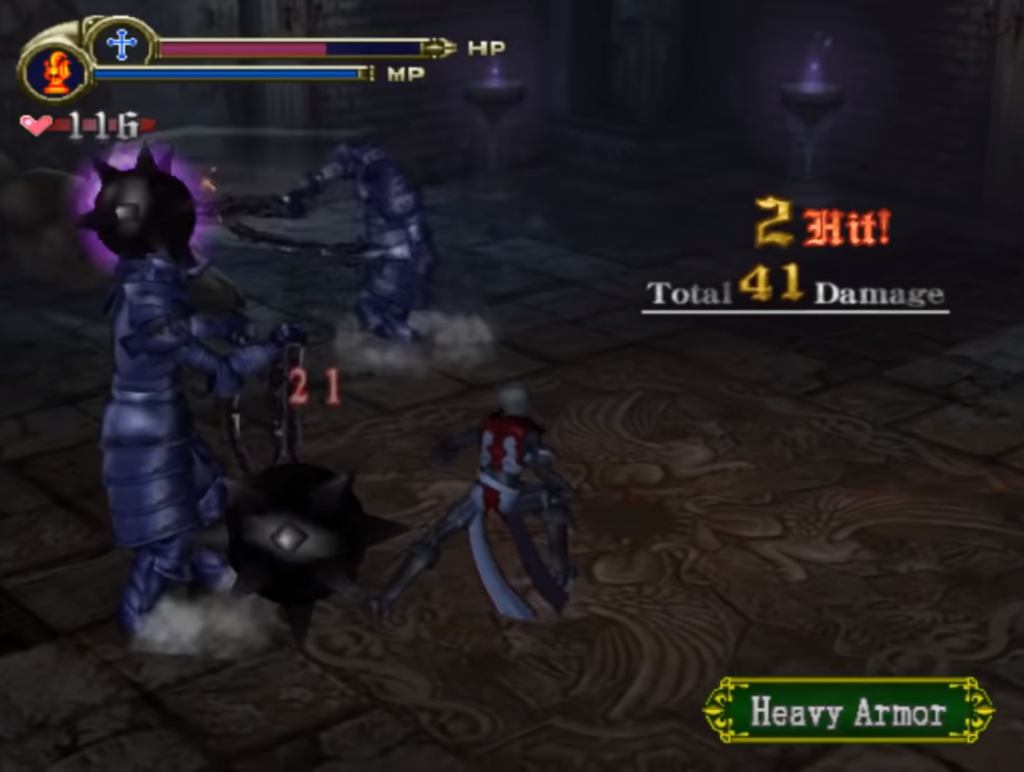 Playing as Leon, you finally see the origin of the legendary Vampire Killer whip and learn that to defeat Walter, you must first slay the various guardians of Walter’s mystical castle. During the journey there are many twists and turns in the plotline. In fact, during the events of this game, we finally get to learn the very origin of Count Dracula himself!

But all storytelling aside, the game itself is quite good. It is very atmospheric. The mood and visuals are spot-on for this type of title. It is a perfect mix of “church-gothic” and horror. As Leon defeats bosses and overcomes obstacles in the castle, he is able to progress deeper and strengthen his power. Aside from fast-paced battles, the castle also contains various traps and timed puzzles you must clear in order to proceed.

The game world is presented in a hub-style layout. The castle is largely open to explore as the player wishes. Of course, there are a number of roadblocks along the way barring access until the player meets certain requirements. But nothing stops the player from backtracking to previously explored areas. In fact, there’s a lot of backtracking in this game.

This game is very action heavy and has a fast-paced combat system. Fans of the castleroid-style games may be a bit taken aback by what’s in store for them with this title. That being said, Lament of Innocence takes everything that Castlevania 64 tried to do, and actually gets mostly right. 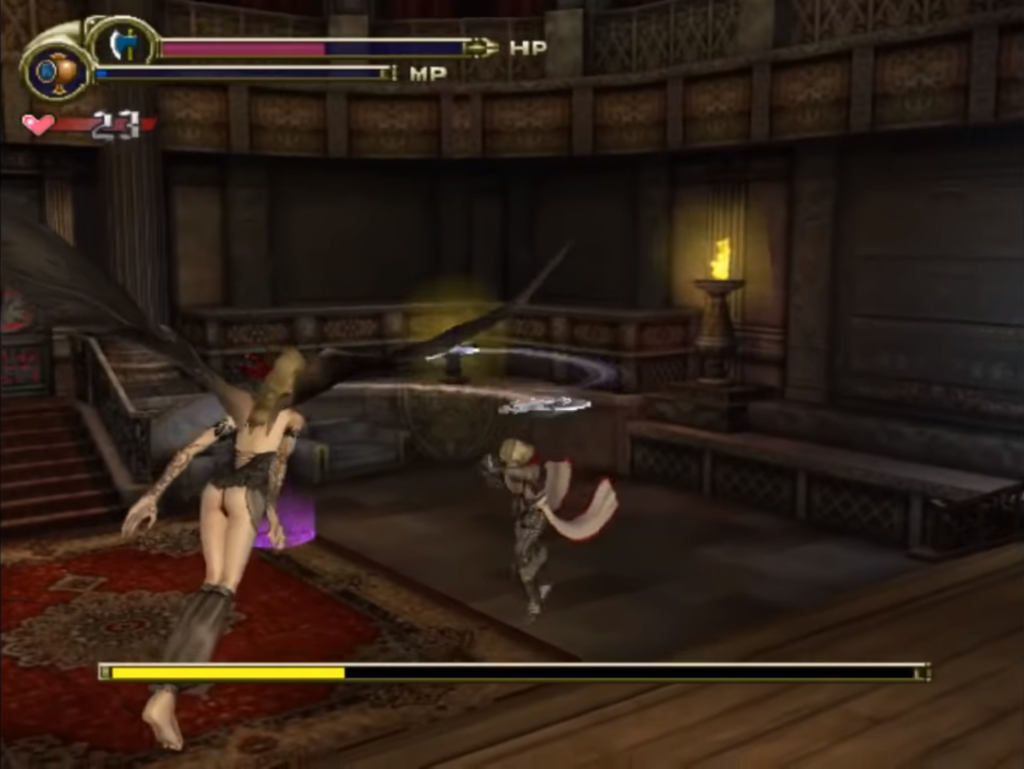 My biggest gripe with the game is the clunky controls. After a few hours of gameplay you do tend to get used to them, but overall they are not very intuitive. Several times during the game I died not because of my ability, but rather because of trying to get the game to do what I was telling it to do. The menus and item selection are a bit burdensome. So is trying to get your character and whip to actually go the direction you are moving your control stick.. This was a major pain-point of mine in the final fight.

Aside from these complaints, I thoroughly enjoyed the game. I do recommend it, if for nothing more than the excellent story and atmosphere. 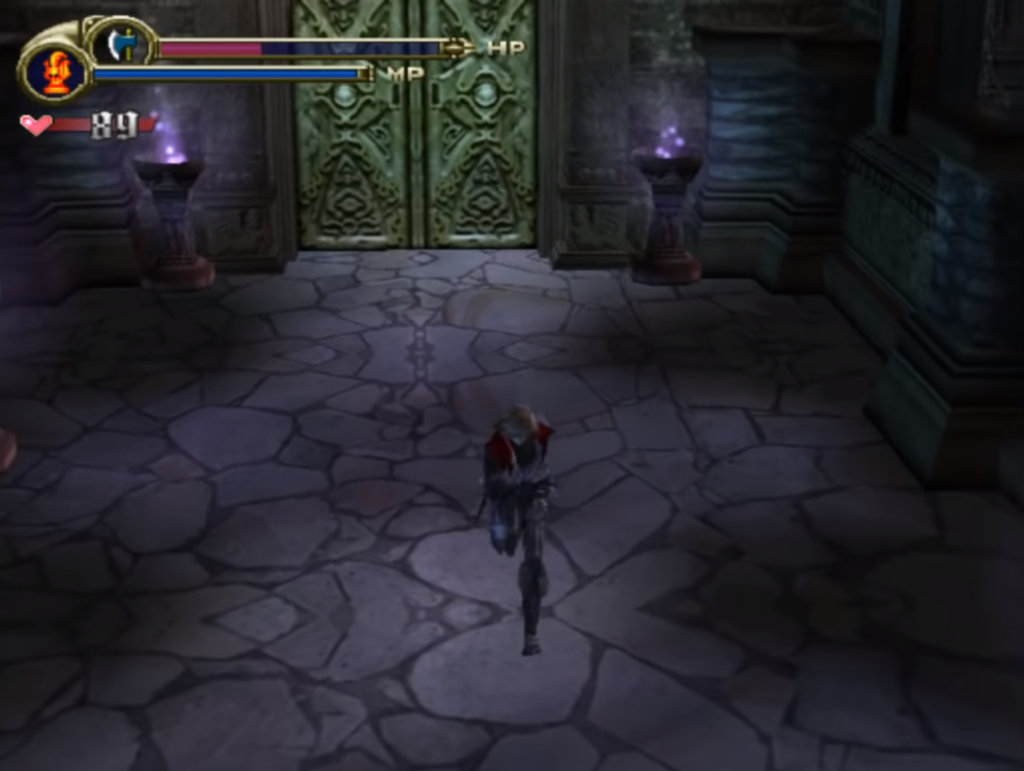 Difficulty: Medium – A little bit of a challenge was brought back to the mix with this title. After a while the monsters don’t pose so much of a difficulty, but some of the jumping puzzles do. Also, if you are a completionist, finding every last nook and cranny poses a bit of a challenge.

Story: The best so far in the series. Many long-time questions are answered. We finally get to the see origin of both Dracula and the Belmont clan. Not to mention what makes the Vampire Killer whip so powerful. Excellent stuff here.

Originality: The 3D design, and hub-style level system is definitely something new. I think it works well. I found the game to be a nice change of pace from the 2D titles that have come before it.

Soundtrack: Good CD quality audio. Some of the synthetic instruments did sound just a TAD bit cheesy, but overall a very good and fitting soundtrack.

Fun: I found this title to be very enjoyable. No real complaints, although by the end I was ready for it to be over. Certain parts of the the game did feel a little repetitive at times.

Graphics: This game really shows what the PS2 is capable of. The lighting and graphical design are nothing short of lovely. It is the most beautiful CV game in the series so far.

Playcontrol: I did have some issues here. Not as bad as LoD (the first 3D game in the series), but still not as good a many modern titles. Many of my complaints were overcome after learning how the game’s camera “thinks”. But it was a rough start.

Value: Fans hoping to play this game will likely have to turn to used game shops or the Internet. Used copies can it’s usually be found for around $20-$30 – a decent price for what you get.

Overall score (1-100): 85 – This is definitely a title that I recommend for a number of reasons. It’s a staple in the CV storyline, not to mention the first generally accepted 3D game in the series. Despite its few flaws, it’s overall a wonderful game.

Other Reviews In This Series