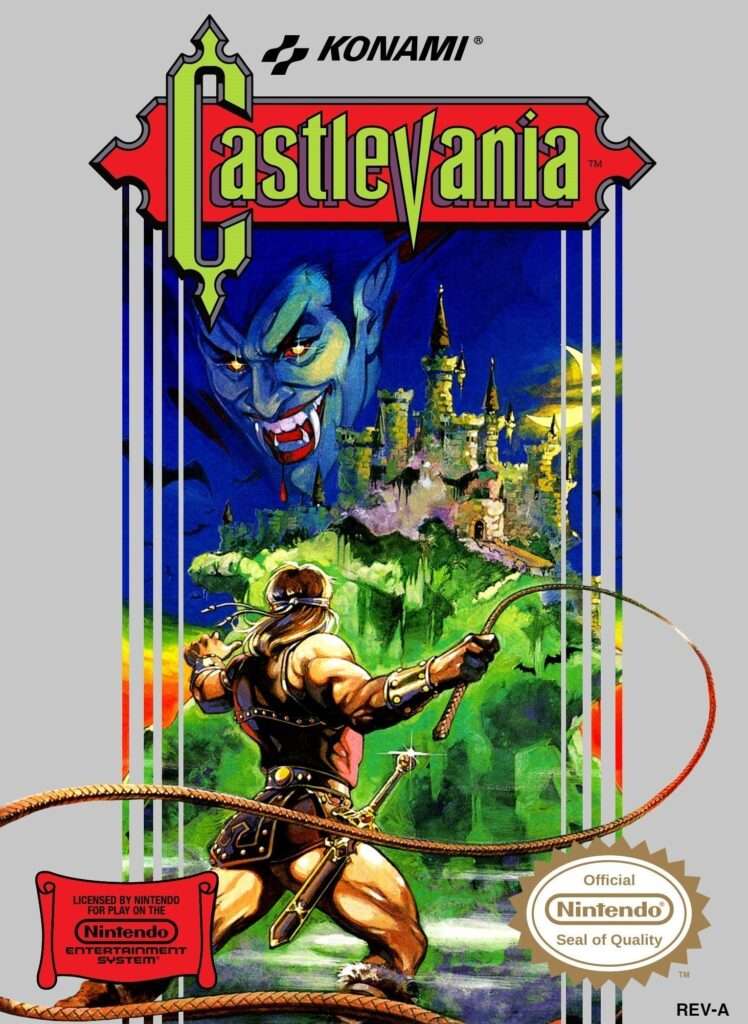 When I was a kid, no other game had cooler monsters and a scarier atmosphere than Castlevania. It’s creepy, but just campy enough to keep you from getting scared. For those that are not familiar, here’s the set up: Transylvania, a place we all know and love. Filled with gypsies and creepy things. But, every one hundred years the land is plagued by the ghostly return of the legendary vampire, Count Dracula. Throughout history, a family of warriors known as the Belmont Clan have always stepped forward to eliminate the threat.

The year is 1691 and Dracula has risen again, this time the hero is a young man named Simon Belmont. He must enter the fortress of Castlevania and make his way through the haunted castle, fighting armies of skeletons, zombies, and other monsters. His ultimate goal: hunt down and slay the evil Count Dracula. 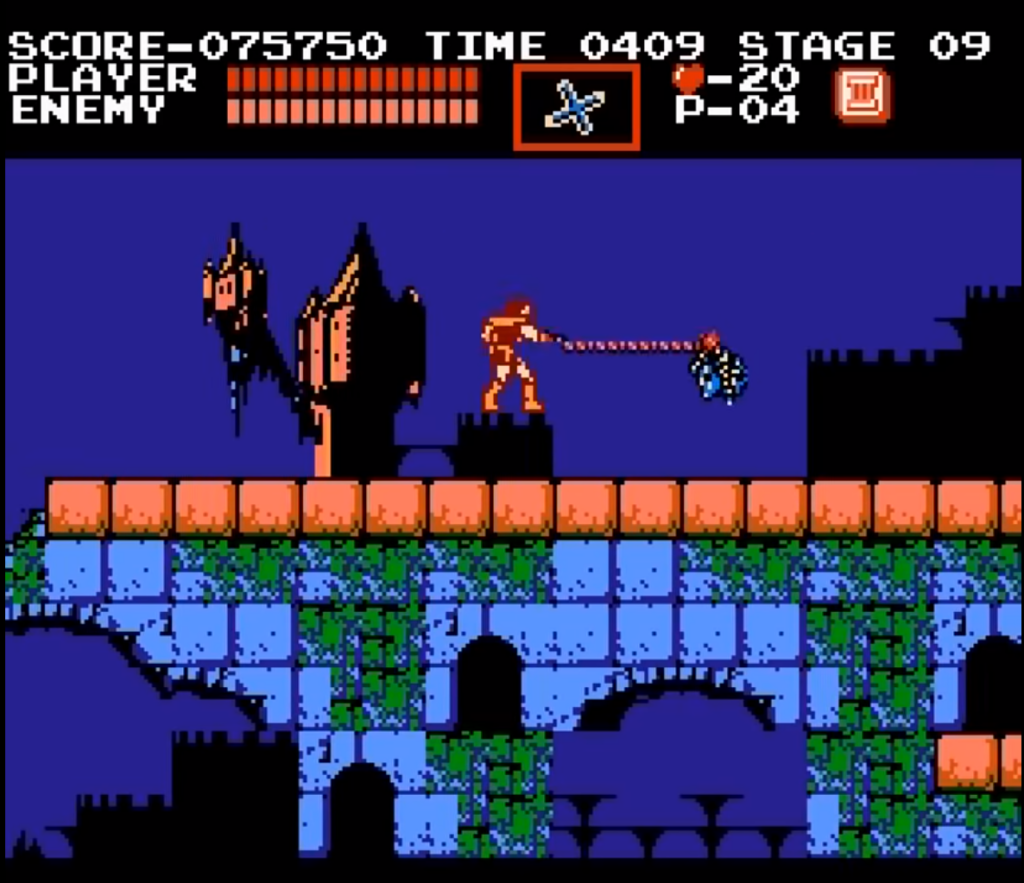 Simon Belmont is armed with an enchanted whip: The Vampire Killer. Throughout the game, this is main form of attack. Although, he will eventually find various other weapons to help him out. The first level begins in the courtyard of the haunted castle, and takes Simon into the lobby. As the game progresses, Simon continues to infiltrate deeper into the castle. The exit of each level is guarded by a boss (usually of the Universal Movie monster variety). These bosses start easy and get progressively harder. Below is a list of the areas and the bosses that protect them.

The Dungeons: The Grim Reaper (Death) 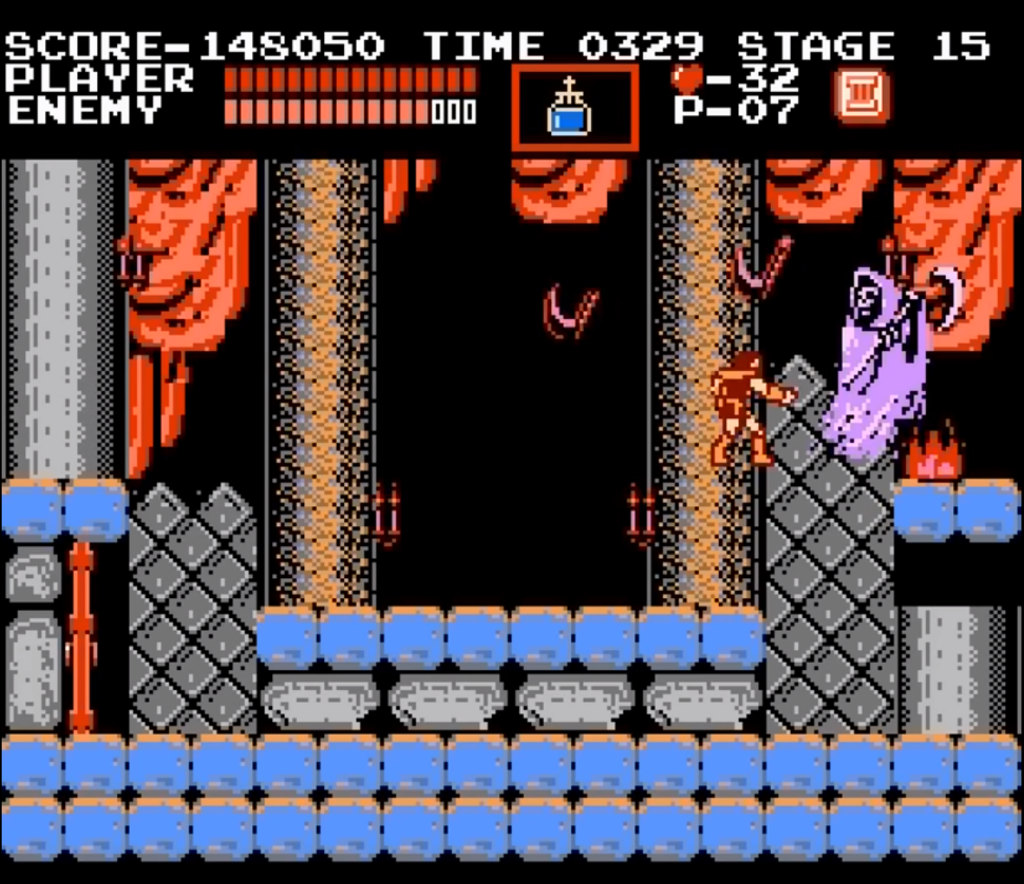 Castlevania is a standard platformer. The levels are fairly straightforward and there’s no backtracking whatsoever. The game starts off moderately easy but get harder as it goes on. By the time you’re to the mid-way point, you’re ready to pull your hair out. The fight with Death, is so difficult its maddening. Very few casual players ever make it past this fight. But like most games of this type, there’s always a strategy and practice makes perfect. Still, Death is tough… Seriously. Compared to Death, Dracula (who is the final boss) is a walk in the park.

Once Dracula is defeated, you’re treated to scene of Castlevania crumbling into ash and there is a really corny credit scroll filled with various puns. In my opinion, it really ruins the actual “horror feel” of the game. At the time, Konami, the publisher of Castlevania, was infamous for inserting these terrible jokes into games during the localization process.

Aside from the cheesy horror vibe, the best thing about this game is the music. WOW. This is some good stuff, you’ll be humming these tunes for hours after playing. All of this makes Castlevania one my all-time favorite retro games. It’s not perfect, but it’s always a blast. 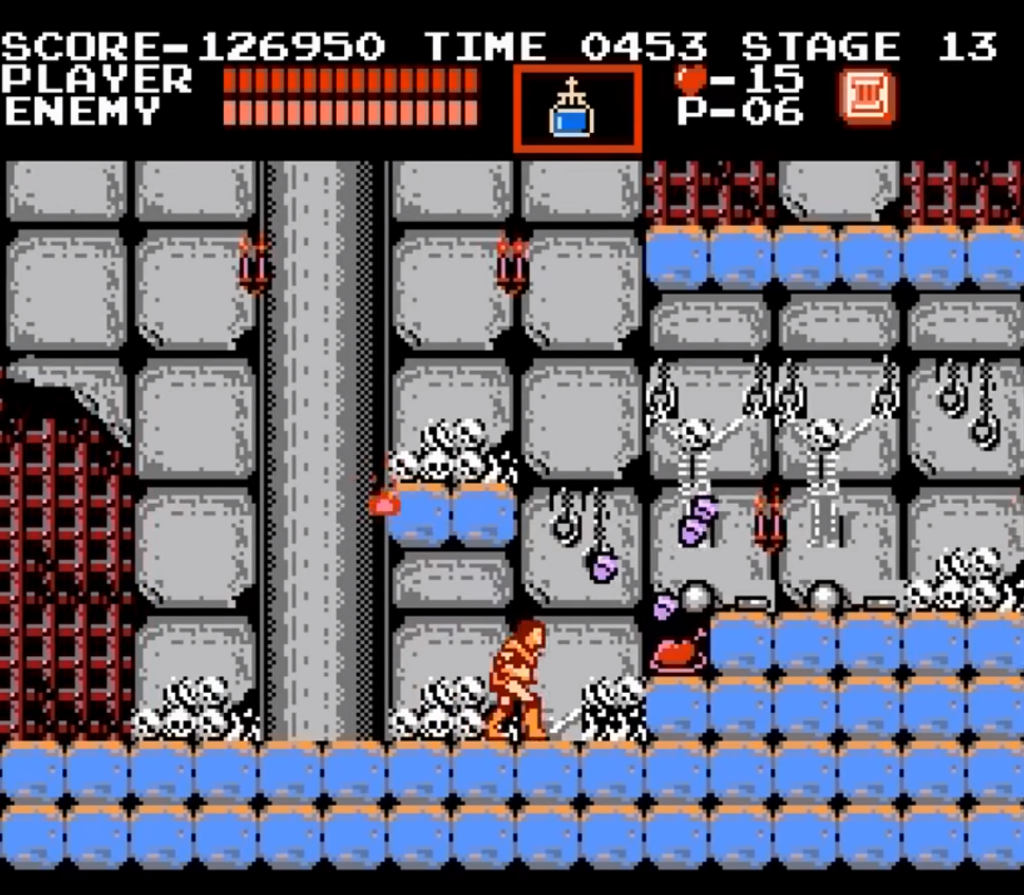 Difficulty: Very Difficult –  For many players, Castlevania consists of only two or three levels. Because for most, that’s as far as they get before walking away from the game in frustration. After that point, the game is brutal. That being said, those willing invest a little time and patience should eventually manage to get through. The boss fights seem a bit out of balance at times. For me, the Grim Reaper was always the hardest boss in the game. Much harder than the final boss, Dracula.

Story: The story is a bit strange. Here, we have taken Dracula, an iconic figure, and inserted him into a game with a different hero. It seems a bit unusual, but it works. The game itself is basically a tour of classic horror movie monsters, set within the confines of creepy castle walls.

Originality:  Castlevania was unlike many of the platformers that were popular at the time. Until this point, most platform games were either shooters or required you to make direct contact with enemies. Giving the hero a whip as a main weapon was big game changer. Suddenly, you can’t always snipe a monster from a safe distance. Now you have to get a little too close for comfort. Also, the whole atmosphere for the game was new and refreshing. The idea of making a showcase for various horror movie icons is campy, but very fun.

Fun:  If you like cheesy horror movies, and creepy environments, this is a fun stroll. However, for younger players and those that get frustrated easily, your enjoyment will often be ruined by the intense difficulty some parts of the game have to offer.

Graphics:  The NES version of the game lacks a bit compared to some of the arcade cabinets. But I tend to forgive this as this was one of Konami’s first big titles on the NES. Everything on the screen is pretty much discernible, and still manages to capture that “creepy castle” feel.

Playcontrol:  Overall, no big complaints. The jumping in the game can be a little stiff at times, and some jumps require you to be pretty precise. What little quirks the game does have with the controls, are easy to get used to after a while.

Overall score (1-100): 80  – Another 8-bit classic. For many, this title is something visited once and then put back on the shelf. But for those that enjoy this type of thing, it’s the cream of the crop. Plus, it is notable for launching a truly iconic series. Opinions on this game are all over the spectrum. Personally, I can easily look past its faults and enjoy it for what it is.