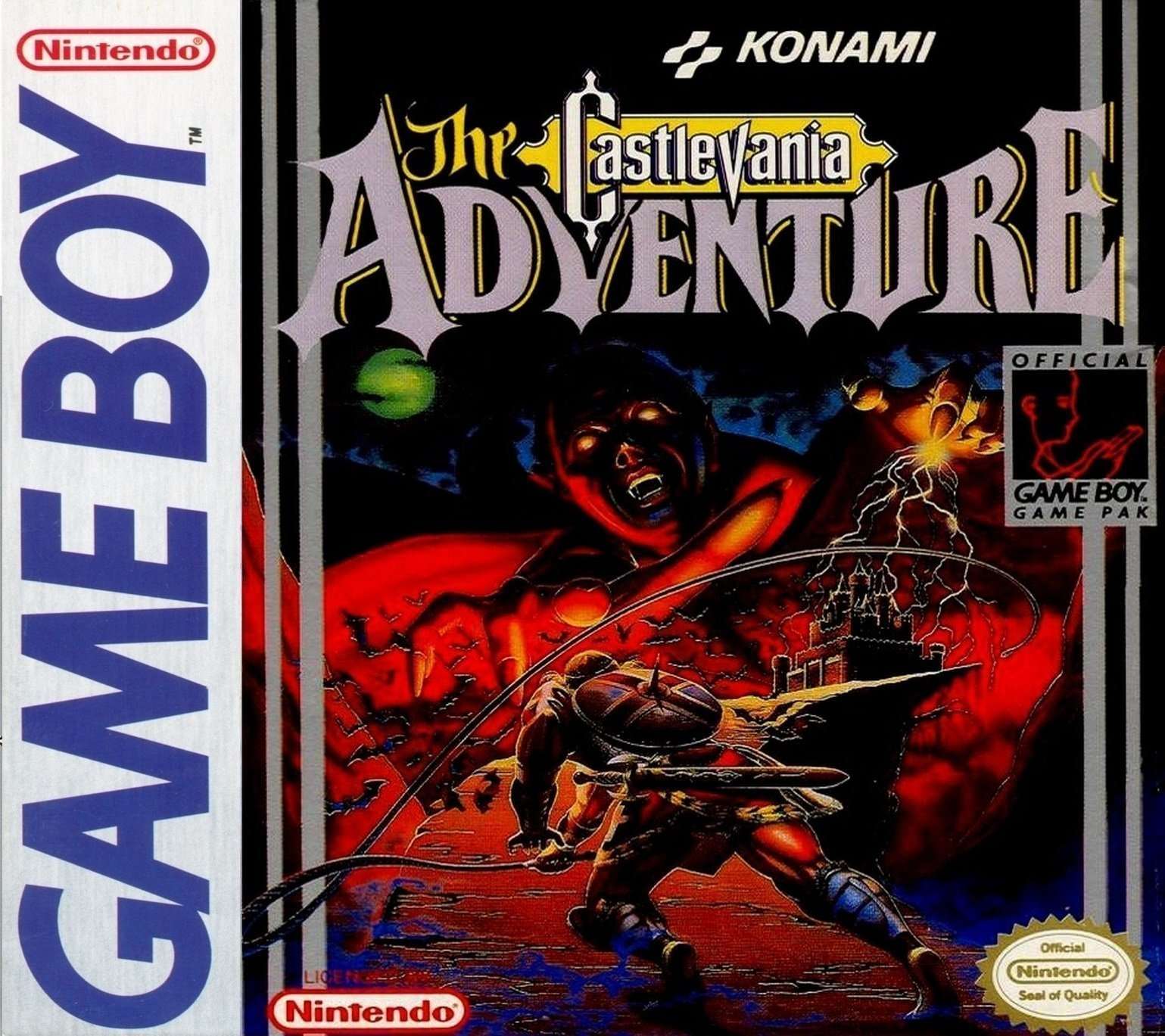 The Castlevania Adventure is the first handheld Castlevania title. In the early days of the Game Boy’s lifecycle, developers were in a rush to make a GB title for their franchises. Many of these early games were thrown together and done rather poorly. Fortunately, as time went by, developers figured out how to better implement their ideas on Nintendo’s new mobile platform. But, this game, The Castlevania Adventure, was one of Konomi’s first GB titles, and it really shows.

As far as story goes, this title hearkens back to the original Japanese manual for Castlevania 1. There was a passage in that instruction booklet that read; “Simon Belmont, ancestor of the fabled vampire hunter Christopher Belmont…” Well, The Castlevania Adventure is the legendary story of Christopher. It takes place in 1576, generations before Simon ever took the whip in hand. The tale is typical, Dracula has reappeared on Earth and the Belmont family rises to stop him. You know, the usual… In the end, Christopher is successful and Castlevania crumbles to the ground soon after Dracula’s defeat. As Christopher turns away to head home, a giant vampire bat is seeing flying from the ruined castle. 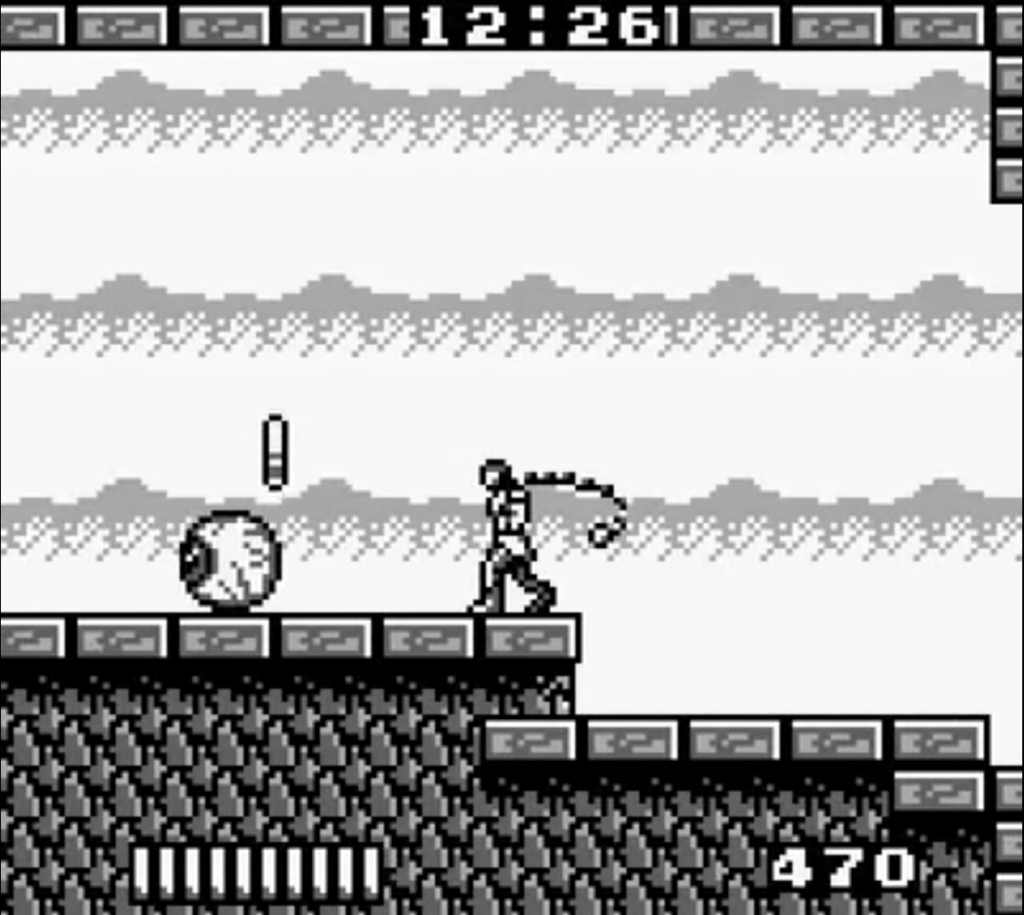 The game is fairly short, there is no saving or passwords. It can take as little as thirty minutes to play through it, but it will likely take much longer than that seeing as the game is so difficult. Seriously. These games keep getting harder. This title is DAMN NEAR IMPOSSIBLE unless you are extremely patient and don’t mind a little self-inflicted torture.

The game is made even more difficult thanks to some extremely terrible playcontrol. Seriously, the playcontrol in this game is very stiff and unforgiving. On top of that, some of the jumps require pixel-perfection. And let’s not even talk about the final battle with Dracula….

Let’s be honest. This game is a hot mess. The graphics and playcontrol are horrid. Also, the storyline is pretty weak. In fact, the only saving grace for this game is the soundtrack. I have to give Konami credit here, the things these guys could accomplish with the Game Boy’s soundchip were nothing short of astounding. 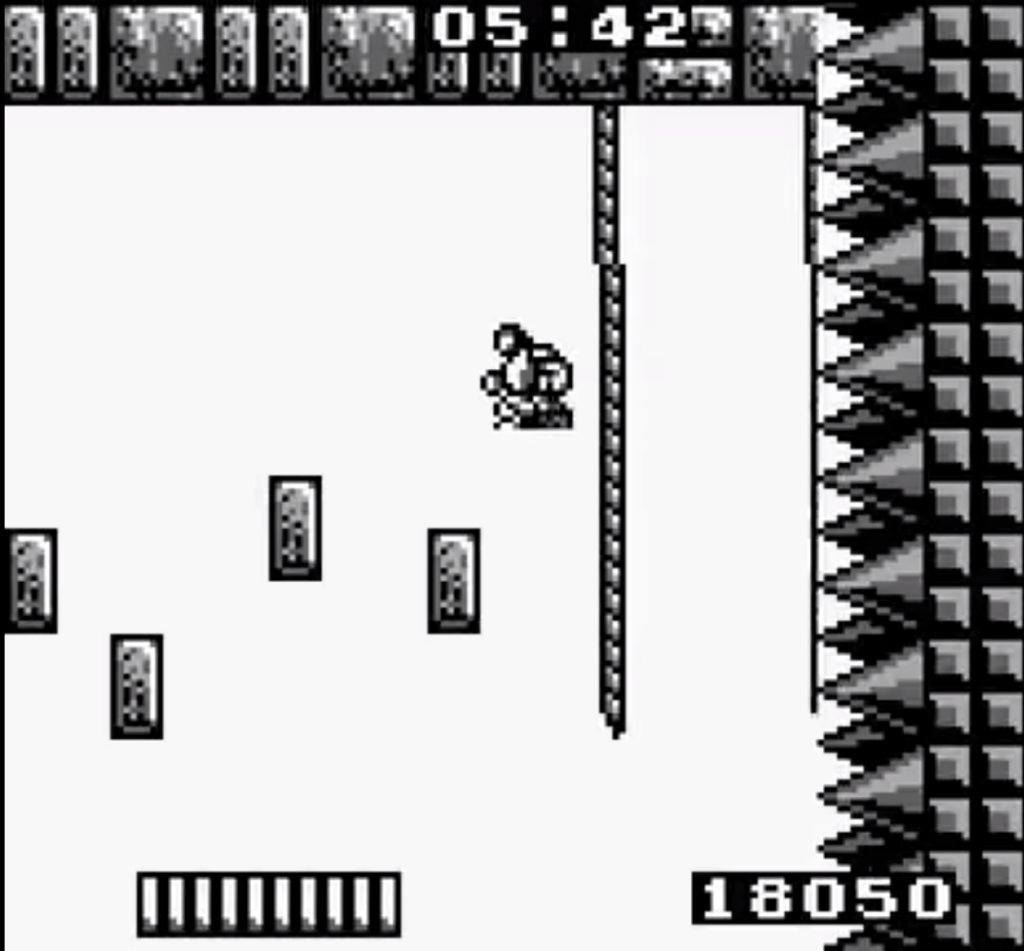 All that being said, despite its faults, this game is nostalgic for me. I have a love/hate thing with this title. I love the music just as much as I hate the gameplay. Yet, somehow, I still love this game… Does that even make any sense? I suppose I can chalk my affection up to the good memories I have about the time in my life when I used to play this title. But looking at it under a critical microscope, I have to admit that this game is pretty bad. But even so, I wouldn’t give up my copy for anything. 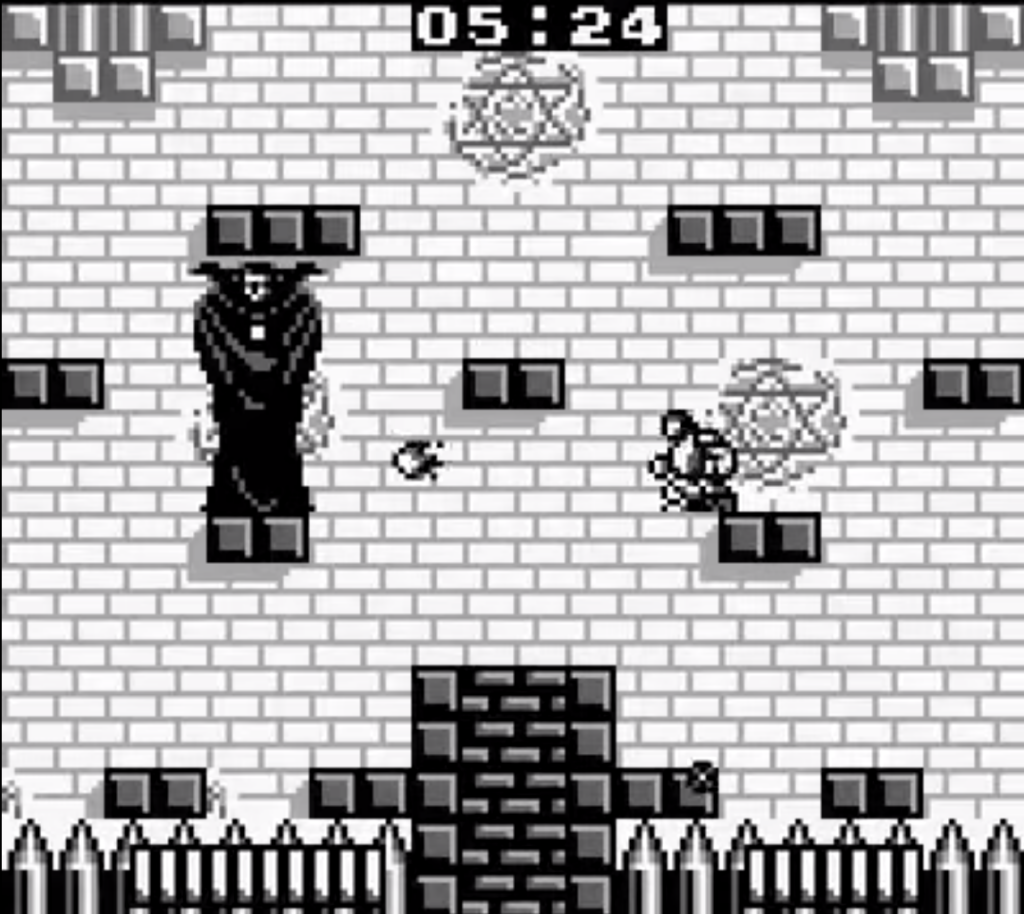 Difficulty: Very Difficult – This is another example of extreme difficulty. Of all my friends growing up, I’m the only person I knew that actually bothered to finish the game. After the 2nd or 3rd stage, the challenge is just insane.

Story:  Again, Konami has decided to focus on a new hero. It’s starting to become clear that the Belmont family has long been the saving grace against the forces of Dracula, which seem to return approximately every one hundred years. Aside from the backstory in the manual, there’s nothing in the game that really gives the player a sense of what’s going on.

Originality:  I get the impression that the team wanted to try to bring the feel of CV and CV3 over to the handheld market, but wasn’t sure how to do it. This game introduces a few new environmental obstacles like rope climbing. There’s also a new like up of monsters. But outside of this, there’s really nothing new to be found in this title.

Soundtrack: For the step-down that the Game Boy was, sound-wise (at least compared to the NES ), the music in this game is surprisingly good. This game is proof that you really don’t need fancy sound synth or redbook quality audio to make a good soundtrack. All you need is some catchy tunes.

Fun:  Most the fun in this title is quickly eroded by it’s high level of difficulty. For me, I take most of my pleasure out of the novelty that this game provides.

Graphics:  Mixed bag here. The backgrounds are actually fairly well done. However, the main character and monsters are pretty basic looking. There’s little to no detail in the character art. Very generic looking, even for an early Game Boy release.

Playcontrol:  The worst. Controlling Christopher Belmont feels like walking around with a steel rod stuffed up your backside. Personally, I find the controls to be very unresponsive and somewhat laggy. This is probably my biggest complaint with this title.

Value: In just a few weeks from the time of this writing, Castlevania Adventure will be available for purchase on the 3DS eShop. Game Boy titles usually sell for under $5 on the eShop. Even for a game with as many issues as this one, this price is more than fair.

Overall score (1-100): 50 – Overall, this is not a very good game (at least in my opinion). But, it is Castlevania and it’s worthy of a look. Being the first handheld CV title, I can be a little forgiving to the developers, but not by much.