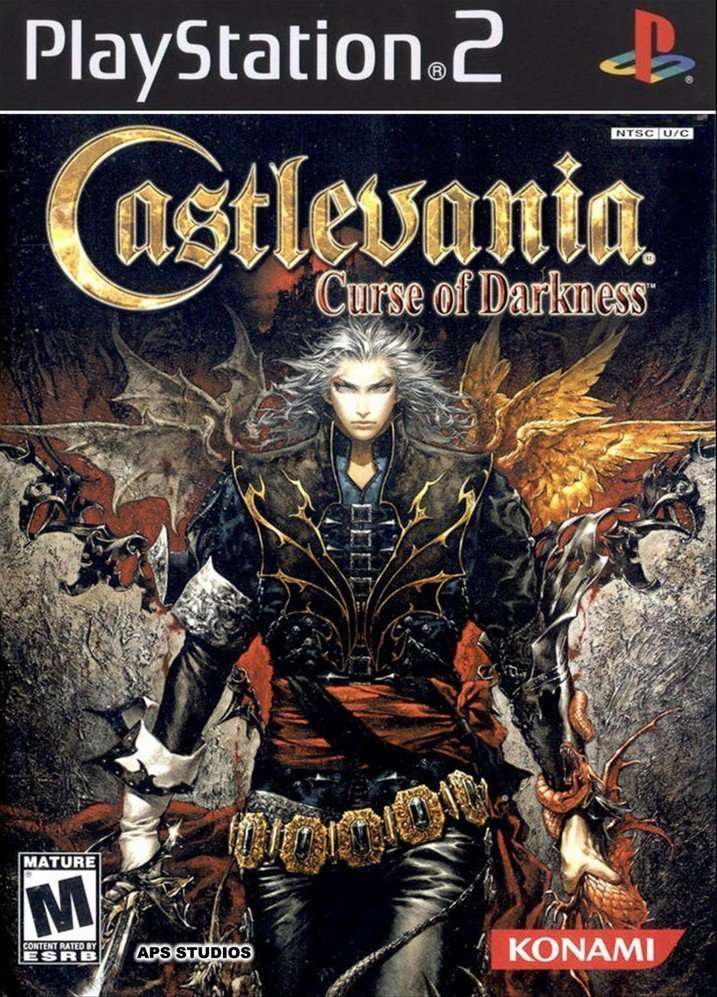 Well, I missed my deadline. I really hoped to have every Castlevania game completed by Halloween, but I suppose that goal was just a little too ambitious. This game in particular took me a bit longer to complete than anticipated. Of course, I’m talking about Curse of Darkness, Konami’s latest attempt at a 3D-style Castlevania. In many ways, this game is very similar to Lament of Innocence. In fact, it is built using the same game engine. Anyone familiar with LoI will feel right at home wit this game. Thankfully, this game resolves a number of technical issues that plagued LoI and even the camera controls actually seem to be a bit improved this time around, which is a big plus.

While this game is very much like the previous 3D title, it is also tinged with a touch of “castleroid” flavor. This time, instead of the levels being hub-based (as they were in LoI), the game is open-world like many of the GBA titles. There are even warp rooms that allow you to backtrack to older areas.

Storywise, this game is a spiritual sequel to Castlevania III. It is set in the year 1479; three years after the adventures of Trevor Belmont. Despite his victory against Dracula, the evil vampire’s curse still brings a fog of death and darkness over the surrounding countryside. The star of this game is Hector, the “Devil-Forgemaster”. Hector was once a minion of Dracula himself, employed to summon-forth (or forge) many of the terrible monsters in Dracula’s army of evil. At some point during the course of Castlevania III, Hector disavowed his evil ways and left the employ of Dracula to live in peace among other humans.

When the game begins, we learn that Hector’s beloved, Rosaly, has been accused of witchcraft and burned at the stake for her “sins”. As it turns out, the charges were trumped up by another Devil Forgemaster known as Isaac. Having once worked together for Dracula, Isaac has made it his goal to get revenge for Hector’s betrayal. 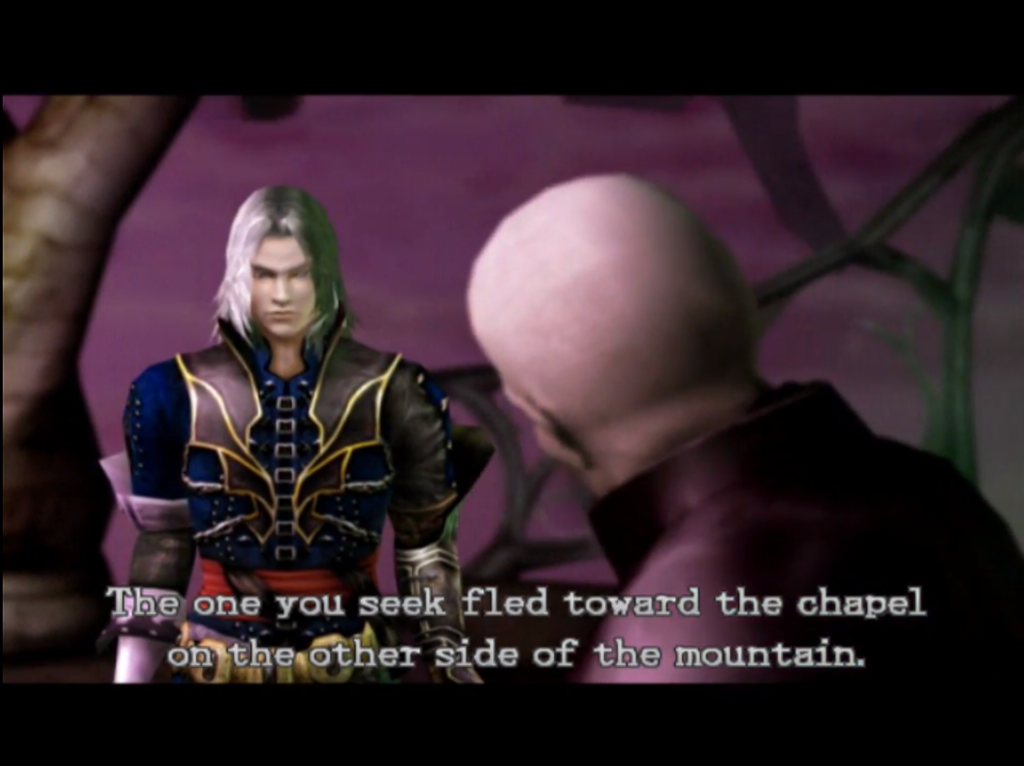 The game is made up largely of Hector chasing Isaac through the countryside and eventually back into the newly re-appeared Castlevania. All the while, Hector  must re-acquire the skills that he lost after turning his back on Dracula. A big part of the game, and the secret to success is the new system of “devil-forging”. As enemies are defeated, Hector will acquire items that allow him to give birth to new monster-companions. Knowing which companions to use at various points in the game are one of the major gameplay factors.

During the game, Hector encounters various characters that help flesh out the unfolding storyline. Several game cutscenes include Trevor Belmont, Isaac, a strange -yet sinister man known as Zead, and the odd and quirky time traveler St. Germain.

As far as gameplay goes, this game does indeed play very much like LoI. Combat is very action based, but slightly more complex than just the mindless hack-and-slash seen in the last 3D outing.  The devil-forge system adds a new layer of strategy to the gameplay that I found to be very welcome and engaging. 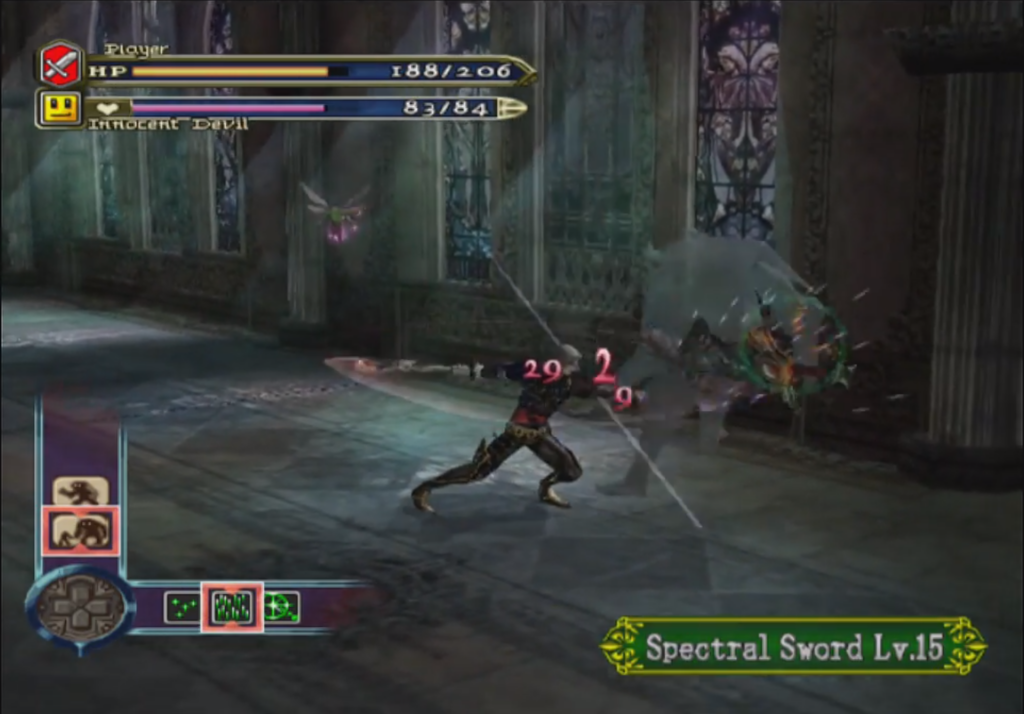 The PS2 version of this game is by far the most popular. However, it is worth noting that a release was also made for the original Xbox. If you own both consoles and you’re unsure which one is the better option, I’d highly recommend the PS2. I’ve tried the game on both, and the default controls just seem to make more sense on the PS2. Plus, as an added bonus, if you have a save file from Lament of Innocence on your PS2 when you start this game, there’s a secret bonus item available for your character.

An interesting point to note here, Curse of Darkness stands as the last “regular” console release in the original Castlevania series. In the epilogue for the title, the time traveler St. Germain gives an interesting speech about the various battles with Dracula over the years. He seems to elude that the greatest battle, the one that finally destroys Dracula for good (the same battle talked about in DoS and AoS, between Julius and Dracula in 1999), has yet to be told. He drops the hint that perhaps we will soon hear that story once and for all. Yet, in same breath he also mentions as a side note “or perhaps the tale will begin anew…”

I found that statement interesting. As someone finishing this game for the first time in 2012 is likely aware, the Castlevania series has been rebooted. I have to wonder, was this the plan all along? Did they know at the time CoD was released that a reboot of the series was pending. Hmm… One is left to wonder.

All that aside, if you’re looking for the definitive OG 3D Castlevania experience, this is your game. It took a while, but Konami finally got the formula right with this title. 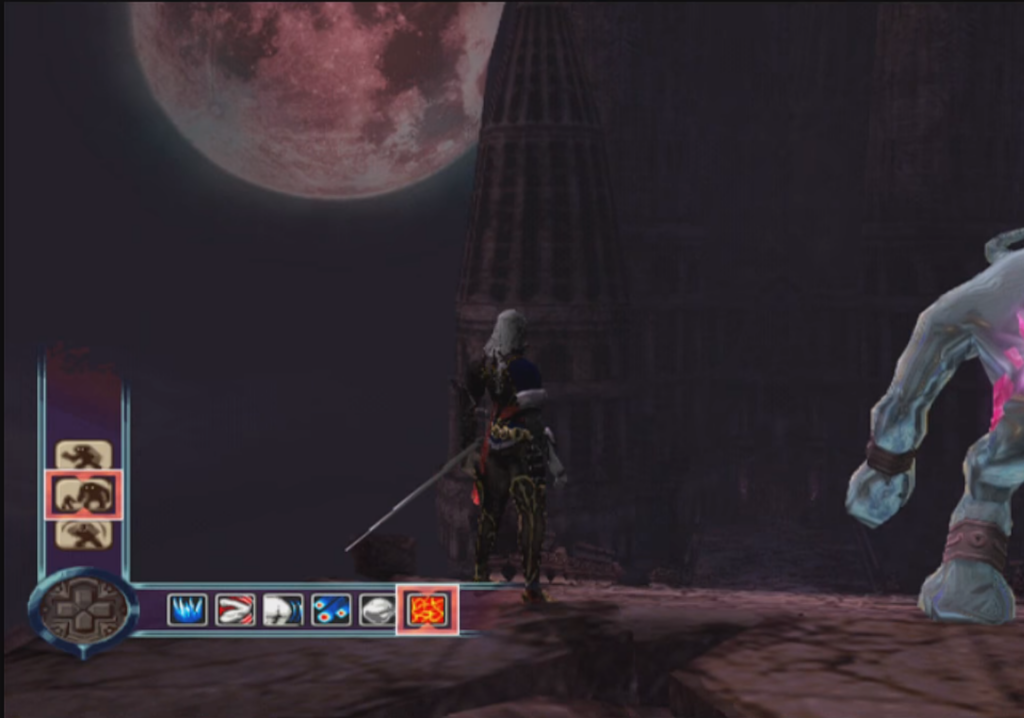 Difficulty: Medium – Most of the game is pretty much a cake walk. A few of the boss fights are challenging. However, if you take your time to unlock all of the devils and seek out many of the hidden items. Things get much easier. Sometimes, it is easy to forget to go back and save. On more than one occasion, my progress was stunted by an untimely death that resulted in having to start back at an older save spot and replay nearly an hour or two of content. Frustrating. But I only had myself to blame.

Story: Very good storytelling in this title. The whole “Devil Forgemaster” thing is interesting, but struck me as bit out of left-field. Regardless, new concepts are always welcome no matter how strange they might be. Plus, it was nice to see Trevor on screen again.

Originality: Konami tried to make this title the best of both worlds. Good 3D graphics, which the open world feel of the recent side-scrolling games. However, I’m not sure the recipe worked. Don’t get me wrong, this is a good game. But it feels a bit disjointed at times.

Soundtrack: Not bad, but sub-par compared to many of the games in the series. Not much to say here.

Fun: While not a bad game at all, I found myself a bit bored by this title after a while. Aside the from the cool cutscenes, there was really nothing that drove me to keep playing. I’m not really sure  what exactly went wrong here, but the game just didn’t grab me like some of the others did.

Graphics: On par with LoI, but yet I found the art direction to be a bit drab. Everything is dark. LoI used much better lighting in my opinion. Also, and this might just be my imagination, but it seems to me that this game is not quite as “sharp” as LoI. Everything seemed a bit softer looking.

Playcontrol: This has been the best 3D CV so far. The camera controls are much improved. Occasionally, things get a little haywire, especially during big battles. But it’s a big step up.

Value: Copies of this game are getting hard to find. However, they are generally available for around $20.00-$30.00. At this price, it is more than worth it for fans of the series.

Overall score (1-100): 70 – Not my favorite game in the series by any means. But still, technologically speaking, it’s probably the best 3D Castlevania game from the original series. If I had to recommend one PS2 title from the series, it would still have to be Lament of Innocence over this title just for the overall vibe. Who knows, perhaps I’m suffering from a bit of Castlvania burnout. But I just felt indifferent about this game.

Available today on: Currently not available – (Updated as of Spring 2022)