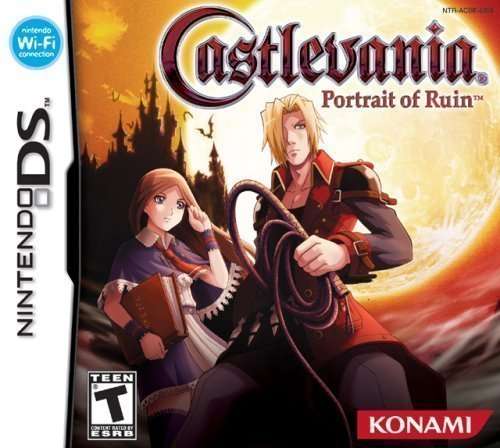 These games keep getting bigger and longer! But I’ve finally finished my playthrough of Castlevania: Portrait of Ruin. Once again we’re back in 2D land. This installment returns to the familiar “castleroid” style of gameplay hailed by fans.

At this point in the life of the Castlevania series, the timeline had grown convoluted and confusing to many. Fans had questions about some of the heroes found in a few of the games, as many of them were not part of the Belmont family. (The only family that is supposed to have the power to destroy Dracula according to game lore.) This game was made to help answer these questions. Portrait of Ruin is also, in many ways, a direct sequel to the obscure Castlevania: Bloodlines.

In this title, you control Jonathon Morris – son of John Morris (from Bloodlines). You also control Charlotte Aulin – gifted mage and lifelong friend of Jonathon. Jonathon possesses the legendary Vampire Killer whip. In this game, we learn that the whip was handed down to this family from the Belmonts. But we find out that he, unlike his late father, he is unable to wield its power effectively.

When Castlevania mysteriously appears, these two heroes arrive on the scene to investigate. They soon learn that the castle has become occupied by another vampire named Brauner. While he has no loyalty to Dracula, Brauner is hellbent on destroying all of humanity. Using his dark magic, Brauner has created a series of secret worlds hidden in oil paintings. Jonathan and Charlotte must explore these worlds to find a way to put a stop to Brauner’s plans.

During their journey they encounter the ghost of Eric LeCarde, friend of Jonathan’s father (fans who played Bloodlines may recognize this characters). They learn that Brauner has turned Eric’s daughter’s into vampires. Eric promises to teach Jonathon the secret of unlocking the full potential of the Vampire Killer in exchange for saving his daughters. I don’t want to give too much away, but over the course of the game we learn why the Belmont’s have passed their torch on to other vampire hunters. 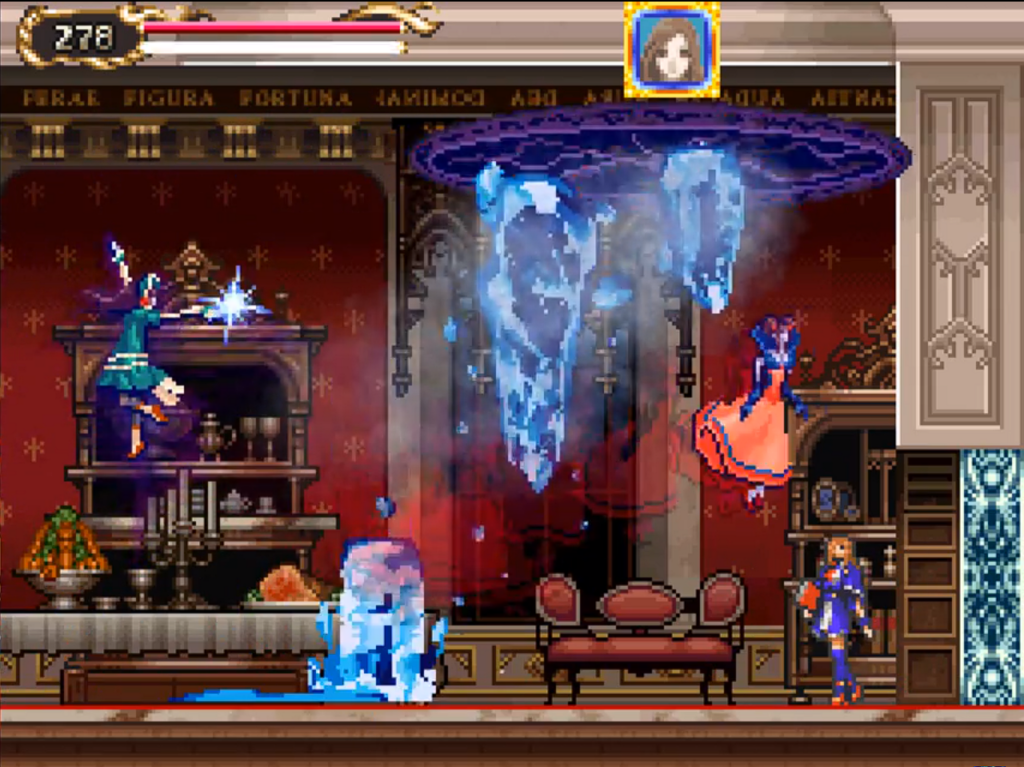 As you might expect, this game is similar in many ways to Dawn of Sorrow. However, gone are the annoying hand-drawn seals. This time the touch screen is used to send commands to the secondary character. You see, in this entry you can switch the lead character from Jonathan or Charlotte at will. While Jonathan excels at physical attacks, Charlotte is adept in magical arts. However, your secondary character is always there to lend a hand. Naturally, there are few puzzles in the game that require quickly switching from one character to the other.

As has become a custom with the handheld Castlevania titles, this game features a number of alternate modes once the game has been completed. The most interesting of all is Sisters Mode. This actually serves as a prologue of sorts to the main game. It details the story of Eric’s daughters and explains how they came to be enslaved by Brauner. There’s also a Boss Rush Mode, and “Richter Mode” that allows to player to play through the game as Richter Belmont and Maria Renard… because, why not. Finally, there’s the Old Axe Armor Mode. This is exactly as it sounds, you can playthrough the game as the Axe Armor monster.

Like Dawn of Sorrow, this game also includes some multiplayer capabilities. The Boss Rush Mode mentioned above can be played cooperatively using the WiFi Connection available through the DS. There’s also a Shop Mode option that allows players to exchange items with each other. 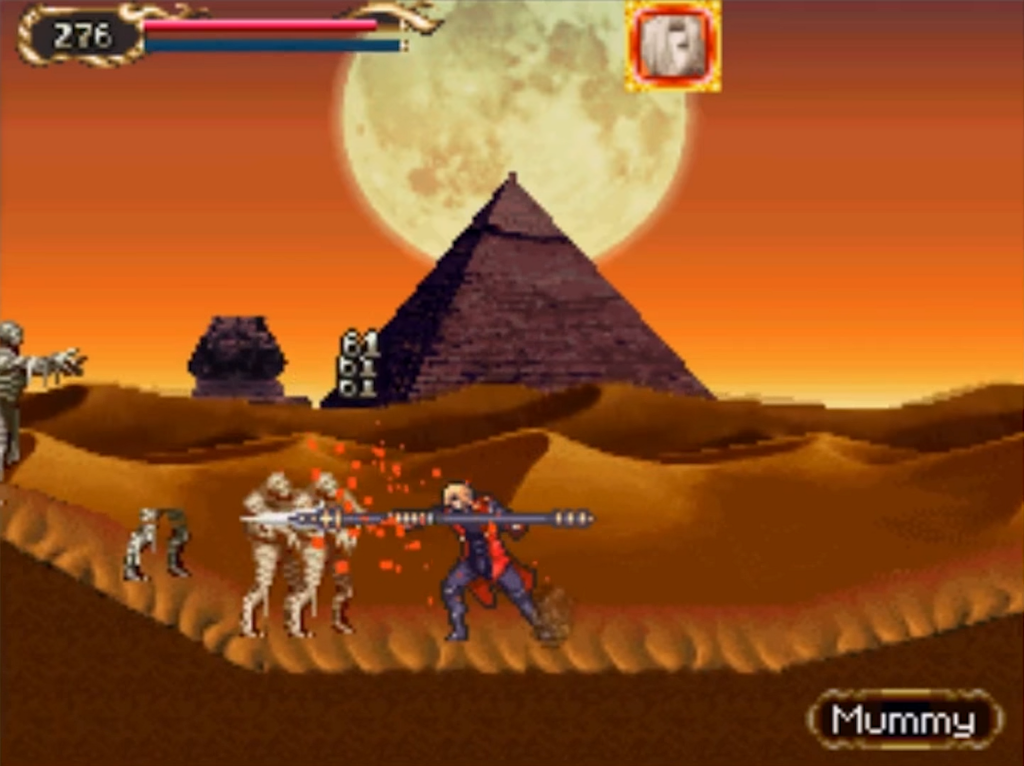 I found the game to be a quite engaging and nice upgrade in many ways from the previous DS title. The graphics are improved and new dual-character system makes for a fun dynamic. For a lore buff like myself, it was nice to finally get a game that ties up nearly all of the loose ends in the Castlevania series. Now, if we can only get that “battle of 1999” game… 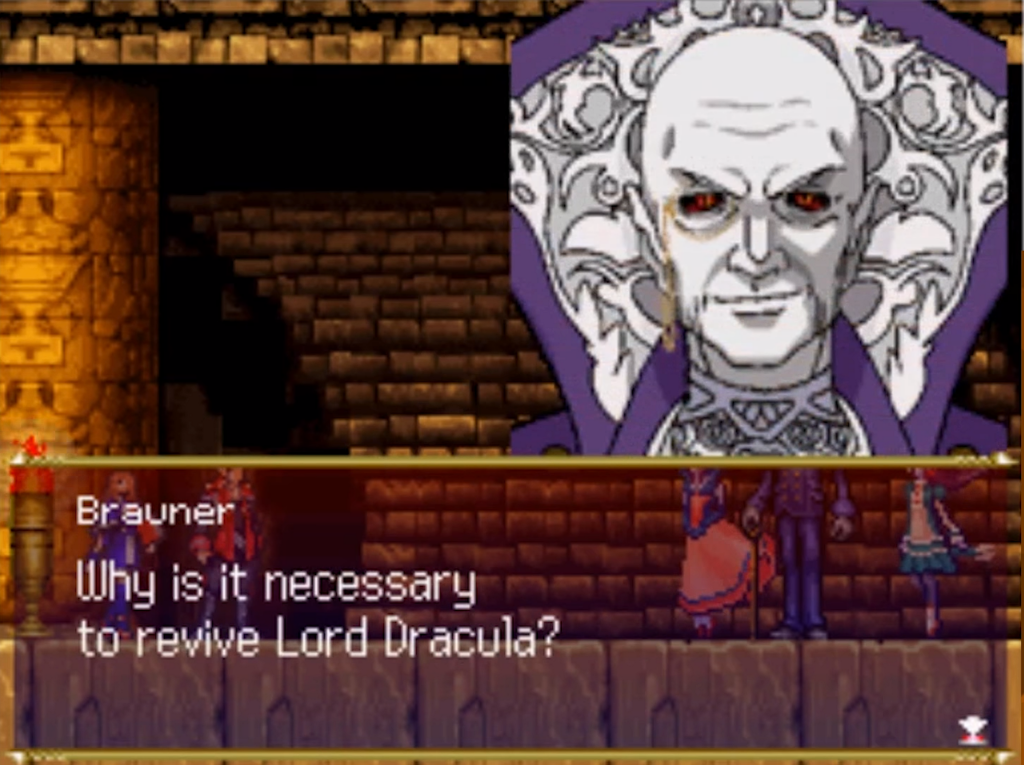 Difficulty: Hard – This title is about as difficult has Dawn of Sorrow. Some of the boss battles seem kind of cheap until you figure out the right combination of moves and weapons. But boss battles aside, the overall game is pretty tough in its own right.

Story: As I said earlier, this game attempts to explain a lot of the gaps in the series. In fact, until this title was released, many of the earlier games had been retroactively removed from the timeline. Namely, titles such as Castlevania 64, and Circle of the Moon. The explanation of how various people can effectively control the whip helped to restore these titles back to their former glory. The overall story in the game is well done and the chemistry between the characters is quite enjoyable.

Originality: Just when I thought the 2D handheld style was getting old, Konami managed to pump a little “fresh” back into things. The portrait system helps keep the level design diverse and  interesting. Also, the online functionality in this game is intriguing. Through WiFi, you can purchase items for sale by other players. Thus allowing you to obtain things needed for quests that you may have missed or sold to the shop NPC by accident. Yes, this was seen previously in prior games to some extent, but this time around Konami gets it right.

Soundtrack: Not the best, but not the worst either. This game has a pretty much middle of the road score. A few catchy tunes here and there, but overall nothing to write home about.

Fun: I found a lot of fun in this title. Playing casually, it took me about a month to complete. I spent maybe a few hours on it at first, but as I got farther into the game I did get a bit hooked and sped through the last half in just a few days.

Graphics: A bit better than DoS! The background scenes are especially well done and I was a bit impressed with overall look of the game. The anime art is clean and colorful, as is the general level design.

Playcontrol: No complaints. Spot-on controls for a 2D game. However, I do feel it’s best played on an actual DS or DSi. I played half of this title on a first gen 3DS and found the device to be a bit too small for my big hands. I actually cramped up a few times, but this is no fault of the game itself.

Overall score (1-100): 85 – Overall, there not anything to complain about. This is a solid title, and a long needed addition to the Castlevania mythos. This is another example of how the later generation 2D Castlevania titles really shined with each new release.