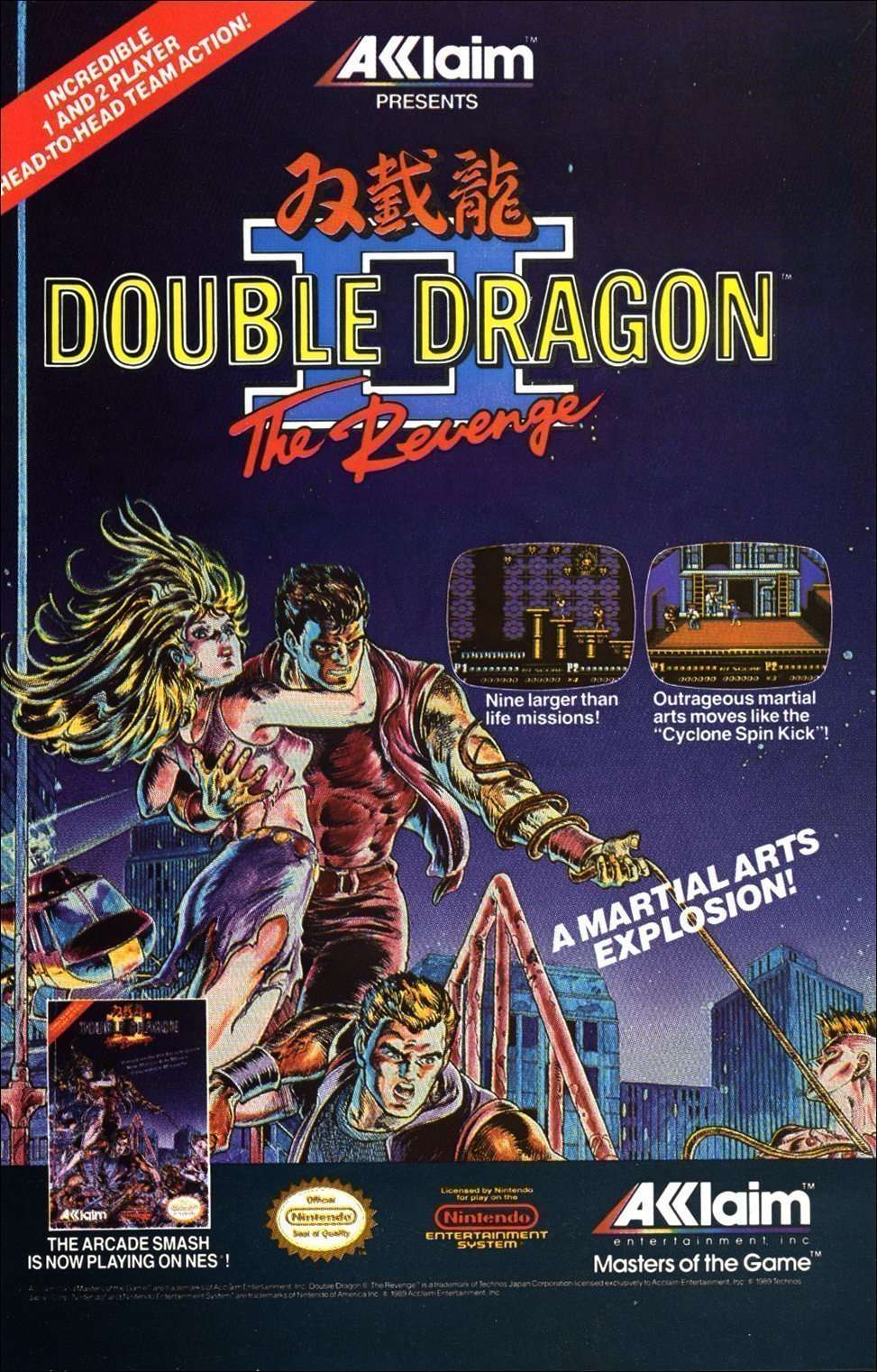 I recently discussed the classic arcade/NES title, Double Dragon. So, I figure I’ll go ahead and touch on some of the sequels that it spawned. The first is, of course, Double Dragon II – The Revenge.

Like the original game, DD2 was first released as an arcade title. It was later followed by a version designed specifically for the NES. As one might expect, the arcade version featured superior graphics and sound when compared to the home console version. The storyline of both ports remains largely the same. At the beginning of Double Dragon II, Marian (the girlfriend of the game’s lead hero) is brutally murdered by gang members. So, our hero (or heroes) set out to kick some thug-butt and avenge her death.

This time, both the NES and arcade versions feature co-operative play, this is a big plus and probably one of my biggest gripes about the original game. So seeing this here is a welcome change.

Aside from the better graphics and sound, the arcade version of the game actually has a hard time competing with the NES release. The home version features a better narrative and redesigned levels/battles that are almost universally considered to be superior to what is found in the arcade version. This is true to the point that many fans of the series, myself included, actually consider the NES version of Double Dragon II to be the “true” version of the game.

In fact, it’s difficult to understate just how incredible of a game the home version of Double Dragon II is, especially in co-operative mode. When compared to the other games in the original trilogy, DD2 is arguably the best.

This title is a favorite with my kids. It’s actually one of the few games that they will sit together and play as a team. Having the co-operative play included in the home version is really a game-changer. It puts this game on my list of must-have titles for the original NES.

It’s difficult to compare the NES port to the original arcade release since they are so different. I’m sure there are plenty of purists who will argue that nothing could beat the original release and I suppose in a number of ways they are right. But there’s just something about the home version that feels “comfortable”. Give it a try and see what I mean for yourself.

Difficulty: Variable  – The arcade version features a single level of difficulty, naturally. But the NES version does technically offer three difficulty settings. However, if you want to see the entire game, you’re required to choose Hard mode – as the final level is only available in this mode of play.  That being said, this game is generally quite a bit easier than the original Double Dragon, even in hard mode. Playing co-op with someone who is even slightly competent, lightens the load even more.

Story: This time, we’ve upped the ante from “your girlfriend is kidnapped” to “your girlfriend has been murdered – let’s go kick their ass!”.   Tropes galore! But, let’s be honest – who expects much in the way of storyline from these types of games.

Originality: On the arcade front, there’s honestly nothing new here. But, for home players the ability to play through the game co-op was a big deal. Even though co-operative games already existed on the NES at this point, having the ability to do so for “Double Dragon” was a godsend.

Soundtrack: The music in this title is nowhere near as good as what you’ll find in the original Double Dragon, but to be honest – few NES games boasted a soundtrack that incredible. All in all, this music is pretty decent and there are indeed a few really catchy tracks but when looking at the big picture, there’s nothing to write home about.

Fun: The game is entertaining on it’s own, but it REALLY shines in co-op mode. If you can scrounge up a friend to play the NES version with you, it makes for a really good time.

Graphics: As mentioned, the arcade version of the game featured state of the art 16-bit graphics (for its day), the NES version is still stuck with an 8-bit palette. But, this game does represent an improvement of the original.

Playcontrol: Double Dragon II features a much improved experience from that of the original game. This is true regardless of which version of the game you enjoy. Combos feel tighter and more precise, and the overall ease-of-use is just a better experience by far.

Value: These days, a copy of the original game can be bought on the Wii Virtual Console for $5. This is a more than fair price for this classic platformer.

Overall score (1-100): 90 – The NES version of this title is the way to go. It’s a solid title and a classic in the arsenal of any NES collection. Co-op play, improved graphics and playcontrol actually give this title an edge up on it’s predecessor.