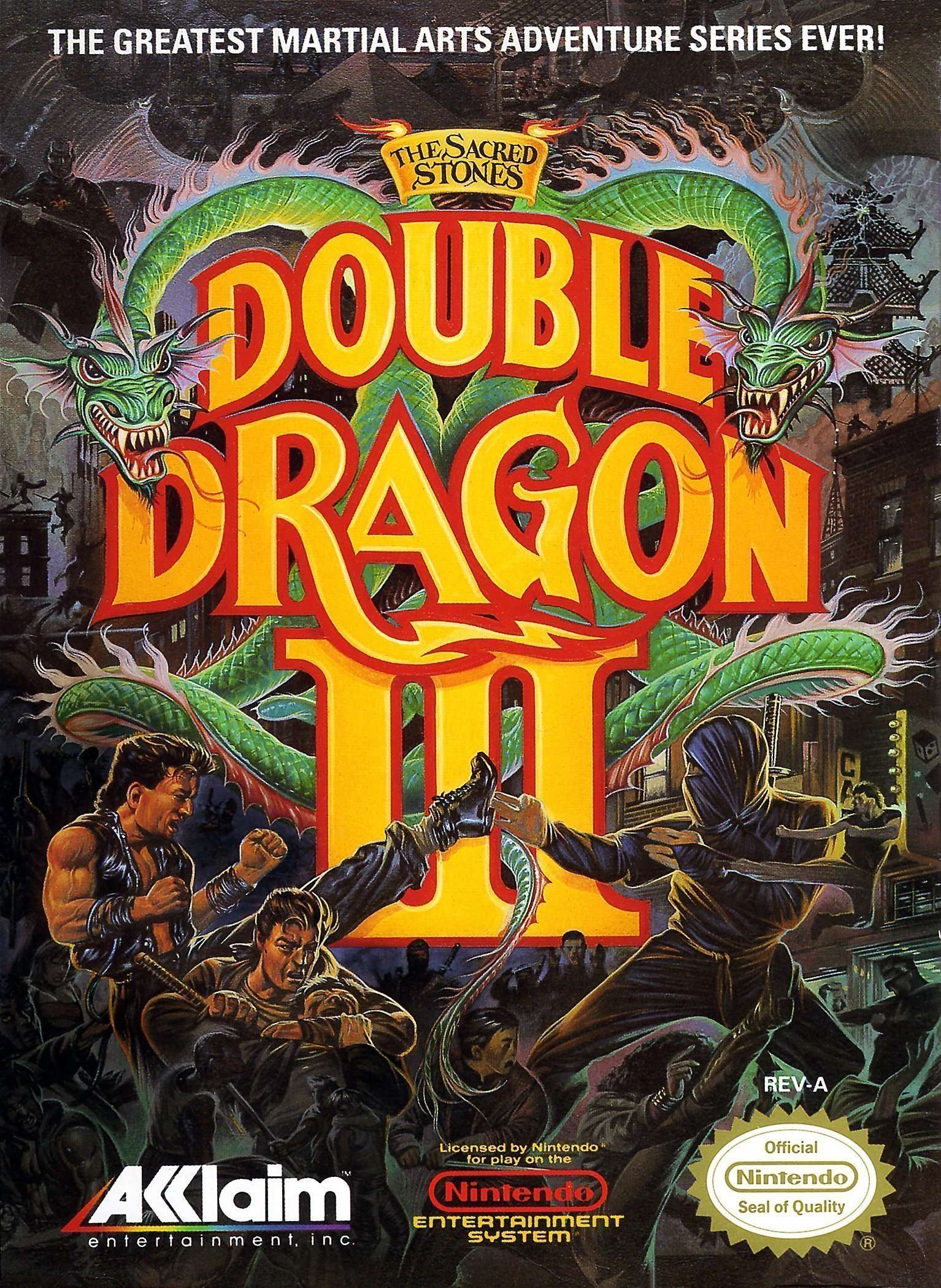 Well, I’ve discussed Double Dragon and Double Dragon II in length, so why not go for a home run and share my thoughts on the third game in the series, Double Dragon III. But, before we get too deep into the discussion, let me clarify something that may not be obvious to everyone – there are technically TWO Double Dragon III’s. As fans of the series know, the first two entries were originally released as arcade titles, then ported to the NES for home use. In most cases, the arcade version proved to be technologically superior, while the NES versions usually ended up being better games – but as a general rule, the storyline and level designs were largely the same overall. That is not the case with Double Dragon III – instead they are two completely different games, each with a slightly different title, yet both of them claim to be the “official sequel”. Confused yet?

The arcade version is called “Double Dragon 3 – The Rosetta Stones“, while the NES version is titled “Double Dragon III – The Sacred Stones“. Both games share a somewhat similar story, but any similarities fall apart pretty quick once you get into the meat of the game. I’m going to go ahead and state up front that nearly anyone you could ask will unequivocally tell you that The Sacred Stones is the better version of the two – in fact, even the authors of the game stand behind this assessment. But let’s talk a little bit about why that is…

As one would expect, the arcade version offers vastly superior graphics and sound. It also offers three-person co-operative play. So far, everything sounds great! But there’s one feature of the arcade version that is universally panned: it includes an in-game shop that features items and buffs that can be bought with real money! That’s right, aside from the coins the player must deposit to even play the game, they can pump more quarters into the machine to unlock in-game features. The money-grabbing attempt was so blatant, that many players boycotted the game as a result. In fact, the backlash so severe, that when the game was released outside of the US, this functionality was removed.  Aside from that, game itself was largely unimaginative. By this time, beat-em-up’s were a dime a dozen and Double Dragon 3 offered nothing that allowed it to stand out in a crowd.

So now we come to the NES version of the game. Yes, the graphics are inferior and it doesn’t offer the three-player option of the arcade machine, but as a whole, it manages to be an overall better game.

Like Double Dragon II, this title also offers a cooperative option. What makes this game stand apart from its predecessors, is the introduction of new playable characters. These characters are unlocked as you progress through the game’s levels. Once available, the player can switch between characters at will. Each character has unique skills and weapons. This offers both a new level of strategy and replayability to the title.

The biggest complaint most players have with the NES version is the difficulty. Unlike all other entries in the series so far, Double Dragon III only offers one life per character. So, being killed early on in the game results in a game-over. But, if you manage to unlock one of the additional characters, even if your primary character is defeated, you can still continue one with one of your others until all characters have been eliminated.  So, even though in a way you do actually have “multiple lives”, that doesn’t change the fact that the game is hard as nails.

In the end, what we have is a very strange but compelling entry in the Double Dragon franchise. This game is an often overlooked oddity in the series.

Difficulty: Hard  – As mentioned above, each character only has one life in which to complete the entire game. There are multiple characters that are unlocked as you proceed, but there’s no denying that this game is extremely punishing.

Story: The story varies slightly depending on which version you are playing… but this is actually the result of localization. In Japan, both the arcade and the NES version share the same story. (The Lee brothers must seek out and locate three sacred stones that will allow them to become the greatest fighters in the world). But for some reason, the US NES version includes another boring narrative involving a kidnapped girlfriend, who can only be located if the heroes find and claim the same “magic stones” referenced in the arcade version. Both scenarios seem a bit lame, but the official NES narrative is just unimaginative at this point.

Originality: I have to give the arcade version some points for trying to be original with their cash-shop… despite it being a terribly greedy thing to do. The NES version also gets some points for introducing new characters to the mix. Sadly, this is deflated a bit by the “done-to-death” story narrative.

Soundtrack: The quality of the chiptunes on the NES version is an improvement over the other games, but sadly the score is largely uninspired and boring. So any technological advantage is pretty much dead in the water,

Fun: I feel like this is a game that had some real potential, but it was completely squashed by it’s extremely high degree of difficulty. For many players, even veteran gamers, the difficulty level feels a little too brutal. So much so, that for many, the game is just simply not very fun to play.

Graphics: The arcade version of the game is miles over the NES version in terms of graphical power. But, putting that aside, this 8-bit game is actually an improvement over the other two NES entries in the series. This is by far the best looking Double Dragon title on the NES.

Playcontrol: By this point, the stiffness and clunkiness that plagued the original game have been refined to the point where the gameplay is fluid and smooth. Hands-down this game offers the smoothest play control of the trilogy thus far. No issues here.

Value: Copies of this game can be difficult to find. Your best bet is the internet where copies usually sell for around $20. If you’re a Double Dragon fan, this is a fair price. But it’s probably a hard sell for anyone else.

Overall score (1-100): 55 – Despite offering several new features and upgrades from the previous NES version, the extreme level of difficulty and uninspired storyline give players little to hold on to. Rabid fans of the series and sadists are likely to enjoy the title, other players will probably want to give this one a pass.