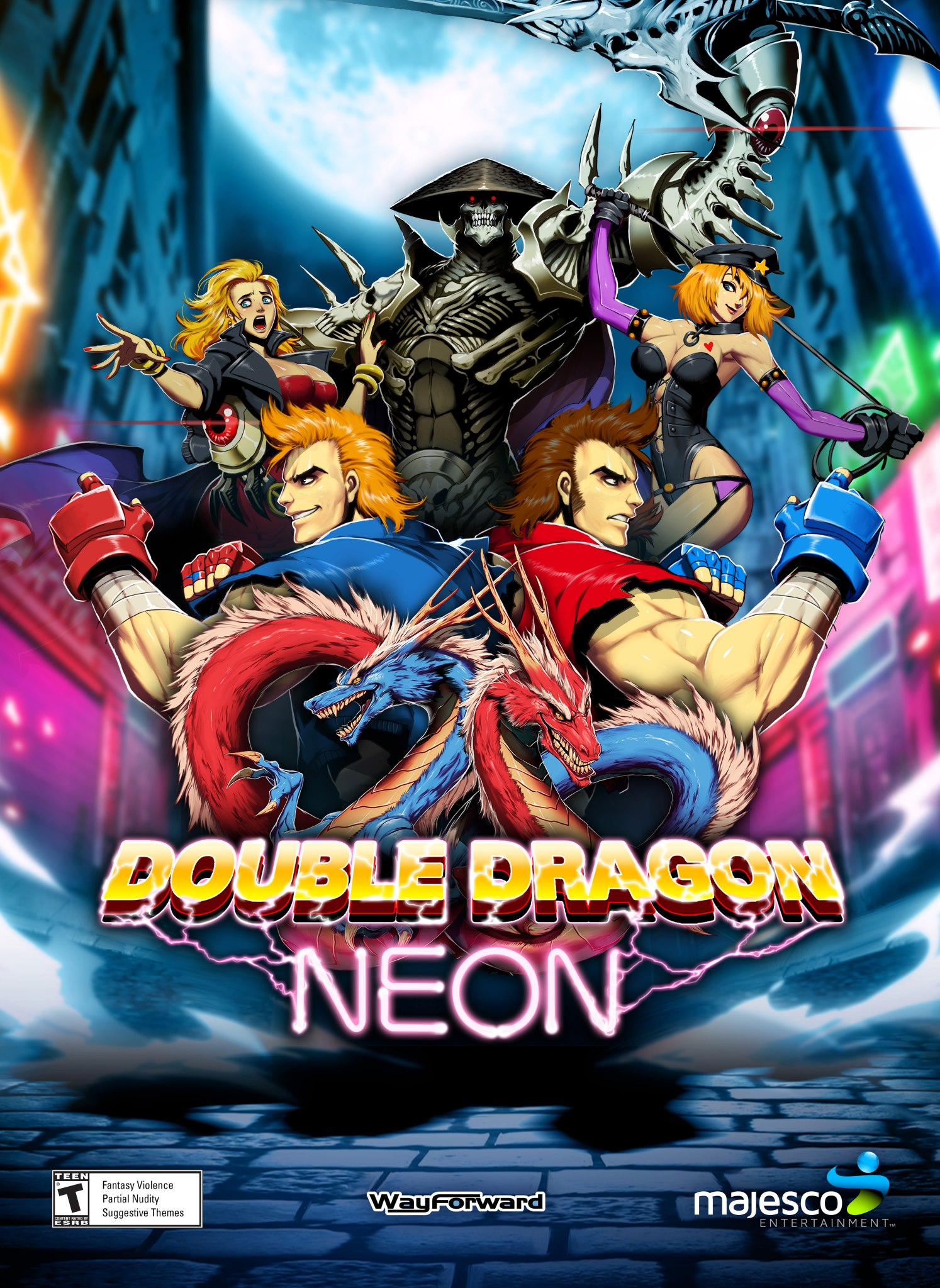 Reboots. Love them or hate them, they seem to be a popular trend right now. I wasn’t sure what to expect when I learned that Double Dragon was getting rebooted as a downloadable title for both PS3 and Xbox 360.

Towards the end of its original run, the Double Dragon series had a really rough go of things. The last couple games in the franchise were dismal. The chronology became convoluted and murky. The motion picture that accompanied the last game was even worse… it seemed like it was all over. Thankfully, the series was redeemed several years later with the release of Double Dragon Advance, a definitive telling of the Double Dragon story, but sales were below expectations. (I admittedly have never played this title).

It seemed like any chance of seeing a new game featuring Billy and Jimmy Lee was long gone. Then the announcement of Double Dragon Neon was made and I took interest. With Technos out of business, the rights to the series have been sold to a company I’ve never heard of; Majesco. What they have brought to the table has certainly got a lot of attention. 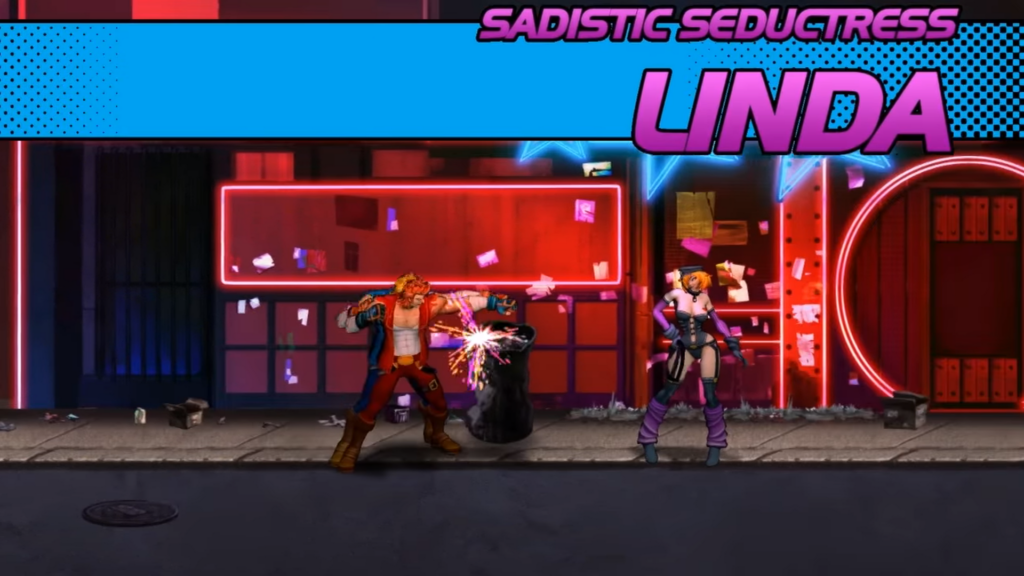 Double Dragon Neon is both a clever reimagining of the series, as well a very meticulous remake. In this game, we see several fan-favorite bad guys and levels redone with all the flair that modern graphics have to offer. Upon first starting the game, there is no mistaking that this is a DD title. Just like the original, it starts off with a group of thugs beating up and marching off with your girlfriend. Followed by the hero appearing and muttering “Awww. Not again!” This first level will be very familiar to fans of the series, everything from the name of the pub at the start of the stage, to the music is right out of the original arcade version. That’s where similarities end, however.

This game is a bit of a tongue in cheek throwback to great fighting games of the 80’s. The whole thing is filled with humorous 80’s nostalgia. The lead character’s banter is a lot less Bruce Lee and a lot more Bill and Ted than I expected. In two-player games, special moves are executed after being proceeded by a “totally radical high-five”. New abilities are unlocked by finding various “mixtapes” left behind by fallen enemies. (Each tape has an appropriately 80’s style soundtrack to go with it).

The whole 80’s-spoof concept does seem a little over the top at first but after a while, I found myself laughing along and really appreciating it. Once you find yourself beating up geisha girls on a rocketship in outer space, you know you’re past the point of no return. 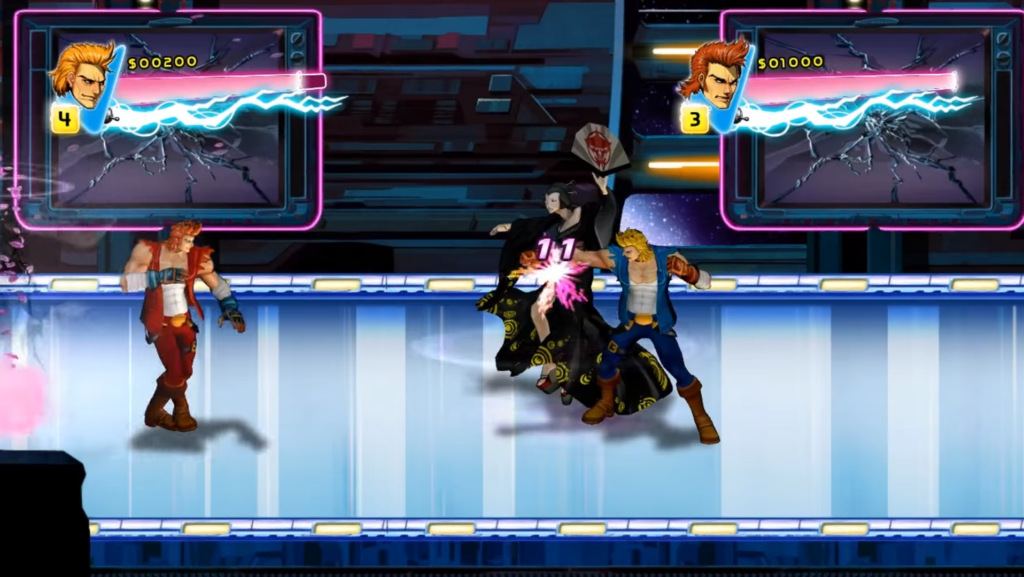 Despite the zany turn of events, the game itself is very well done. It has everything that a fan of the old Double Dragon games will appreciate with a new twist and modern presentation. Just be prepared to laugh a bit. Funny or not, I’d love to see more classic games get this kind of treatment and attention. To say that I was entertained by this release is putting it lightly.

If you’re a fan of the original games, this is a title that’s definitely worth your attention. Everything you love about Double Dragon is present here, even if it’s wrapped in a slightly different package. 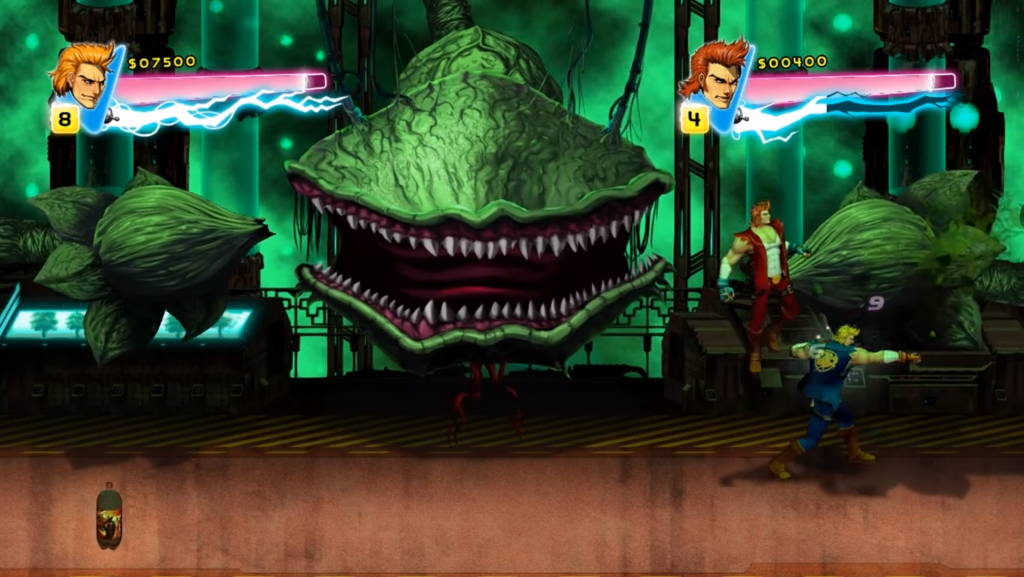 Difficulty: Difficult  – One thing this game has in common with it’s retro counterparts is the level of difficulty. Like most games of this type, you will have to work hard and master the controls to progress very far. However, unlike most of the older games, your progress is saved after each level.

Story: Being a reboot, the story is the same. However, this time the enemy gang is led by a supernatural wise-cracking skeleton… Ok.

Originality: Despite being a remake of an older game, there’s actually a lot of new stuff here. The whole comedic retro concept is a very original idea. The introduction of unlocking special moves by acquiring/forging mixtapes is a great alternative to the standard fare of leveling up via experience points or level progression.

Soundtrack: I cannot say enough good things about the soundtrack to this game. In my review of the original Double Dragon I lamented over how incredible it would be to hear those classic songs done with real instruments – well this game does just that. Many of the classic tunes from both Double Dragon and Double Dragon II are present in the soundtrack for this game. Also included are original 80’s inspired pop songs and even an incredible ridiculous song during the end credits performed by both our heroes and Skullmageddon himself… The best thing about it? You can download the entire game soundtrack for free from doubledragonneon.com. Great, great stuff here!

Fun: I had a total blast plaything this game. It appealed to both the kid and the adult in me. Unless you just have no sense of humor, or absolutely hate fighting games, what’s not to love about this title?

Graphics: This game feature modern style cell shading. So the title has an overall anime/cartoon art direction. I know a lot of people don’t care for cell-shaded games, but I’ve never had a problem with them as long as they are appropriate. Cartoon style Black Ops? No thanks… but for something like this, it’s perfect.

Playcontrol: This game takes advantage of modern controllers. So gone are the days of a two or four button Double Dragon experience. Fans of the original games will need to adjust to the new control scheme, but it falls into place quickly and feels very natural.

Value: This game is available for the low price of $10.00. At this price there’s absolutely no reason not to give this one a shot.

Overall score (1-100): 85 – I’m a huge fan of this game, and as a result I’m going to look a little bit further in Majesco to see what other games they have out there. For the $10 asking price, you simply cannot go wrong. This is one of the better “online arcade” games I’ve spent my money on in a long time.