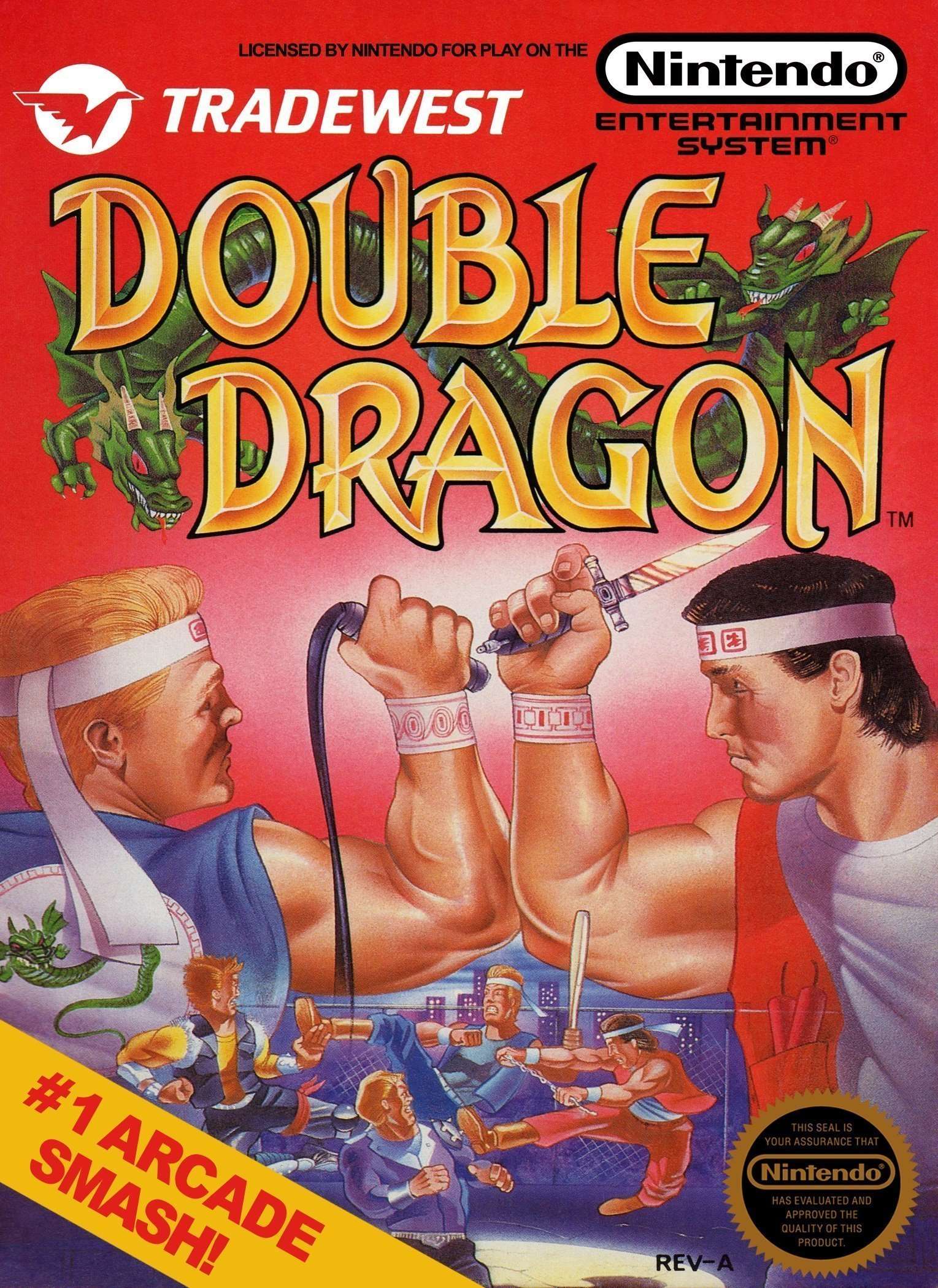 There’s always a first time for everything. For me, Double Dragon was the first time I had ever seen a “beat ’em up” game. For all I know, it may have actually been the first of its kind. I first encountered this title in an arcade and it completely blew me away.

The concept behind the game is simple. You’re a hardcore dude from the streets and you have a really smokin’ hot girlfriend. One day, some thug walks up and punches her in the stomach, throws her over his shoulder and takes off with her. Well, that rubs you the wrong way and you (and your brother – if playing in 2-player mode) decide to track him down and get her back. From that point on, it’s one big slugfest all the way to the final boss.

I spent many many quarters punching and kicking thugs, but I never managed to reach the end. Then one day, I saw an amazing sight. There on the shelf of my local store was Double Dragon for the NES. I begged, pleaded and did a bunch of extra chores – and within a month’s time I had earned my reward… Only to be shocked and somewhat disappointed when I got it home. The NES version of Double Dragon was nothing like what I had played at the arcade. It was uglier and it seemed very watered down. But, while the NES version was not as pretty as the Double Dragon I saw in that arcade cabinet, for many (including myself) this was the version of Double Dragon that we all came to know and love.

Looking back, I realize that the NES hardware was simply unable to re-create the experience of the arcade machine. The arcade version looked to be a 16-bit game. The color palette and processing power just didn’t exist in a home-based console at the time. But still, they tried their best to translate that experience to the NES, and for the most part, they succeeded.

By today’s standards, either version of the game is very antiquated. But at the time there was really nothing like it. As you progress through the game you can unlock new moves and fighting abilities. Packing all of these moves into a controller with only two buttons was quite a feat. To make it work, the developers got creative. Button combos were the most common method, but sometimes certain moves could only be executed depending on the direction you are facing. It’s actually quite impressive how they managed to pull it off.

Aside from graphics and playcontrol, there are other differences between the two versions as well. Some of these differences are also story related…  Spoiler alert – on the NES, once you reach the end of the game, you realize that your lady was actually kidnapped by your twin brother. This is a plot element not present in the original game.

But that’s not all. While the NES version of the game does feature a standard 2-player mode, it’s not a co-operative system like the arcade version. Instead, it’s a turn-based system. This was something else that was a bit of a disappoint for me as one of my favorite parts of the arcade game was playing alongside a friend. In lieu of co-op play, the NES version does have an option that allows two friends to engage each other in head-to-head combat. Sadly, it too is a bit limited in its scope, only allowing two of the same characters to battle each other. Interestingly enough, this alternate mode seems to have much better graphics and character detail than the main game.

Despite these limitations, Double Dragon is one of a kind. It spawned several sequels over the years, all of varying quality. The second game in the series is arguably better than the first, while the third is almost universally panned. A fourth and fifth game were released for the SNES, neither gaining much interest. Recently, a reboot of the series was released called Double Dragon Neon. This is a game that I’ll be talking about in great length in another post. For now, I’ll wrap this review up. 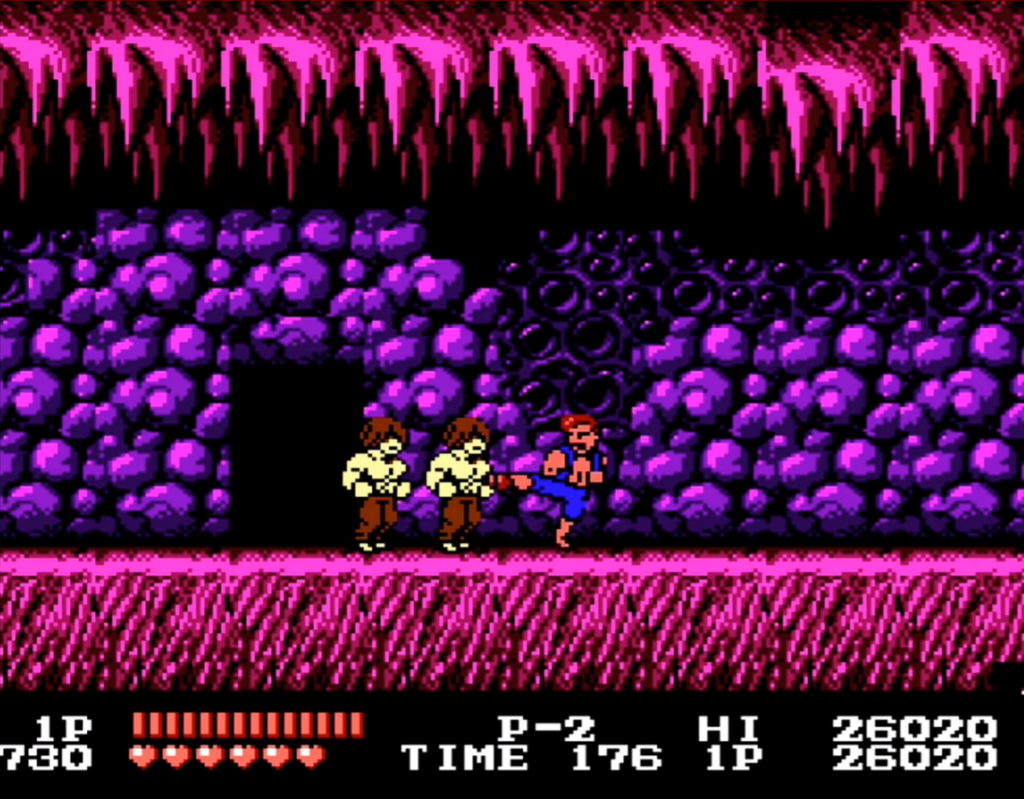 Difficulty: Difficult  – The game starts off easy, but gets tougher as you go. Aside from combating thugs, you eventually have to deal with environmental hazards as well. Everything from pits to booby traps. The stage bosses can also pack quite a punch. While the details above apply to the single player game, playing against a real life opponent will vary depending on their skill level.

Story: The main premise of “go rescue your girlfriend” has been done to death. But somehow, when put in a street thug setting, it’s somewhat forgivable. The NES version also tries to tie the appearance of repetitive adversaries into something having to do with twins… odd stuff.

Originality: For me at least, this game presented a brand new concept. I had never played a street fighting game before and this title has it all. Martial arts, weapons, what more could you want?

Soundtrack: One of the best things about this game is the music. Hands down. These tracks are awesome. The title music alone is fantastic. I would love to hear the theme played with a real rock band… and that guitar solo. Damn.  I’m sure it’s been done. In fact, I’m going to have to scour the net now to see what I can find. Definitely not a disappointment here.

Fun: Overall, this game presents a really good time. Even today, it’s good way to kill an hour or two. I let my nine-year old play it and he had a blast. That’s always a good indicator

Graphics: Even for an NES title, the graphics left a little bit to be desired. Compared to the arcade version, it is garbage. But, It’s not really fair to make that comparison. That being said, Double Dragon 2 is a big step up from the original and it was also an 8-bit title. I feel that a little more time could have spent to improve the look of the game.

Playcontrol: In my opinion here, the game suffers a bit. The play control can at times, feel a little imprecise. Messing up combo moves happens often, and a lot of the time it really feels like you nailed it right on. After a while, you do tend to get the feel for things, but it just seems harder than it should be.

Value: These days, a copy of the original game can be bought on the Wii Virtual Console for $5. This is a more than fair price for this classic platformer.

Overall score (1-100): 80 – There’s a lot about the NES port of the game that could have been better. But there’s just as much about it that is done right. This is definitely a title that’s recommended for anyone who enjoys retro games, despite it’s flaws, it’s a classic.