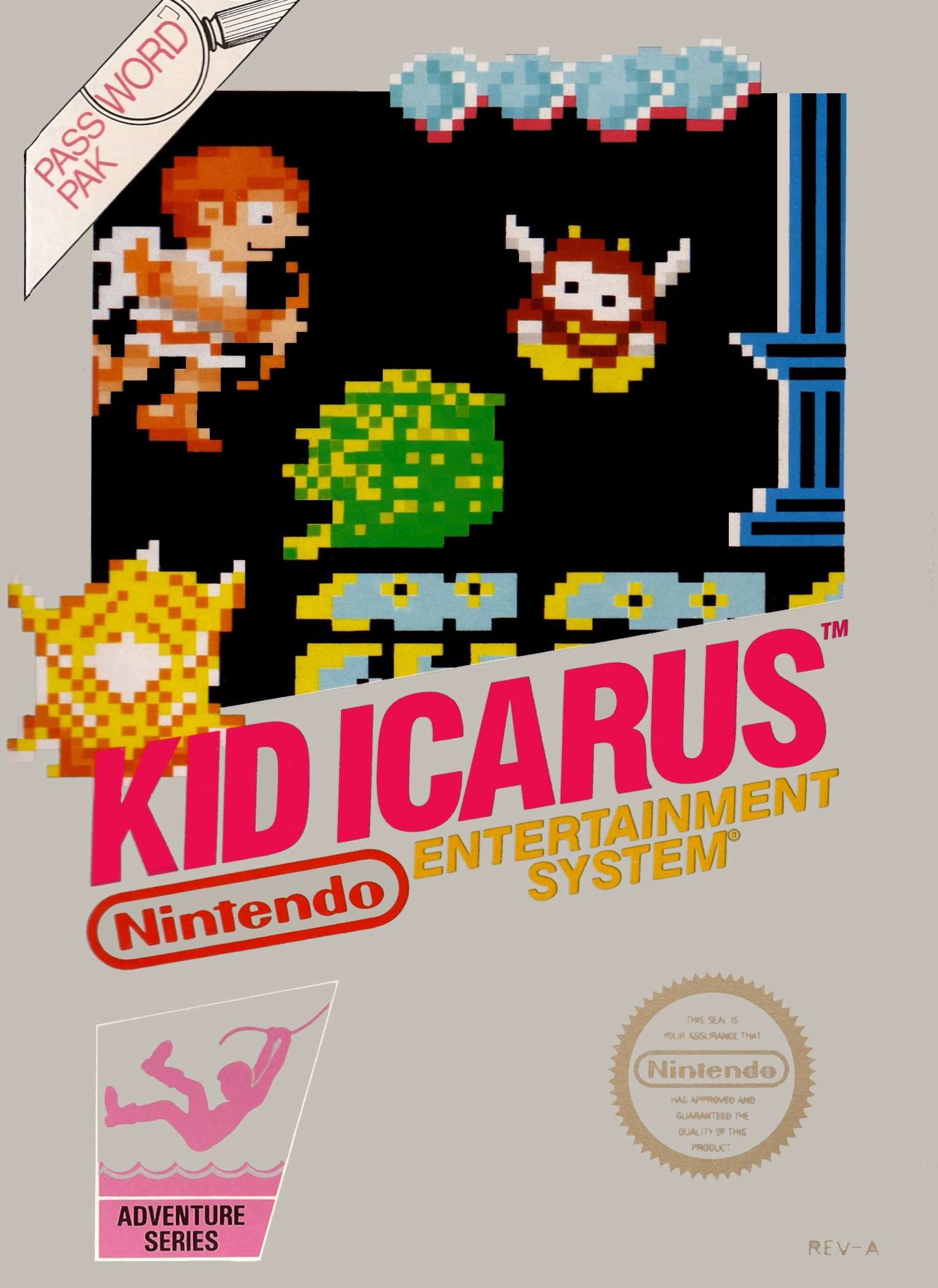 Flipping thru my retro collection, I found myself playing another classic Nintendo title, Kid Icarus. One of the quirkier first-party Nintendo titles, Kid Icarus is often compared to Metroid in the sense that it is both an up-and-down and side-to-side platformer. However, unlike Metroid, the world is not open and the player cannot progress backwards.

The storyline of Kid Icarus borrows greatly from Greek mythology, but it takes quite a few liberties. In this game, the world is ruled by two goddesses, Palutena and Medusa. As it turns out, Medusa is evil and dislikes mankind so she summons her army from the underworld and invades Palutena’s palace in the sky. Using her powers, Medusa imprisons Palutena and turns all her bodyguards into stone. The angelic residents of the palace are imprisoned in the Underworld while Medusa rules supreme.

The game begins when the young angel Pit, escapes from his prison and begins his ascent back up to the heavens. His goal is to find the three sacred treasures needed to defeat Medusa and rescue Palutena.

Kid Icarus is a pretty traditional platform game. Levels are divided into sets, that increase in difficulty as you go. At the end of each level set, there is a castle that Pit must conquer in order to retrieve one of the sacred treasures. Players start with a small amount of health, but as you progress through the game you are able to increase your maximum health making Pit harder to defeat. When your health meter runs out, the game is over, but players have the option to receive a password to let them continue later from the same spot.

Recently, an enhanced 3D remake of this game was released for the Nintendo 3DS. For the purpose of this retro review, I played through both the remake and the original version. As a kid, I spent countless hours with the original game, so I was very curious to see what an “enhanced version” would be like. I must say, the enhancements make a huge difference. I’m not a fan of the whole 3D thing, so I usually turn it off. But the new sprites and backgrounds are a huge improvement over the original. The new version of the game saves after every level, so the old password functionality is gone (thankfully). I’ve also read that this new version is less difficult than the original game, but I don’t really see much of a difference.

This game is one of the classics from my youth. Back in the 3rd and 4th grade, this game really sparked my interest in Greek Mythology. At the time, I remember going to the school library and checking out books on Greek Mythology, all thanks to Kid Icarus!

The lore behind the game is what kept me fascinated as a child. I mention that because that’s really the main thing that caught my attention. Both the graphics and music in the original version leave a lot to be desired. (Which is really bad, because I hear that the graphics for the US release were an upgrade from the original Japanese version). On top of that, the majority of the game is frustratingly difficult. It spares no mercy, even on the first few levels.

Having completed the new version, I found it to be a nice trip down memory lane. But sadly, this is one game that has not aged well in my opinion. Even with the all the new visuals the 3D Classics version provides, this game still feels like a relic from the past.

Difficulty: Very Difficult  – This is your standard 8-bit platformer. The enemy placement is the same every time, so with practice and memorization it gets easier. But it’s still a pretty brutal game. This is more true in the beginning of the game. Once you acquire several upgrades things do tend to get a bit easier. That being said, the last level of the game is pushover. It’s the grind to get there that is tough for many.

Story: The backstory is a pretty interesting mix of real life legend and fantasy concepts. Aside from what is printed in the instruction booklet, there’s very little story presented in the game itself.

Originality: While there was really nothing NEW brought to the table with Kid Icarus, it is certainly a unique game. Looking back, a lot of the game feels like various ideas all duct-taped into one cartridge. It’s flimsy, but yet it manages to hold itself together.

Soundtrack: I found the game soundtrack to be poor in quality but good in composition. With one exception.. the DAMNED REAPER TUNE. Never before in the history of gaming has their been a more annoying and yet, mocking tune composed. The funny thing is, I think that’s *exactly* what they were going for. If you’re not sure what I’m referring to, you’ve obviously never played the game. — Side note: the fortress music is classic!

Fun: If you a person that is not easily frustrated, this game can be a lot of fun. However, for many, it’s a really nice way to get pissed off in record time.

Graphics: The original version was pretty nasty looking, even by 80’s standards. The new enhanced version is a nice upgrade. It kind of brings the game up to a 16-bit color palette with some nice background rendering.

Playcontrol: Pretty spot-on as far as the controls go. As a platformer, there are many precise jumps needed; so steady hands are a must. The character of Pit is not particularly agile, so first-time players will need a little time before getting the feel for it all.

Value: These days, a copy of the original game can be bought on the Wii Virtual Console for $5. This a more than fair price. Players who preordered the new Kid Icarus: Uprising game can receive the new 3D Classics version for free. Everyone else will have to pay about $6. If you have a 3DS, the 3D remake is certainly the best way to go.

Overall score (1-100): 65 – This game represents the attributes of both a good and bad game. It’s hard to give such a poor score to a classic title, but in all honesty, it’s just not that good of a game. I have read that it suffered from rushed development, and I can believe it. Despite my low overall score, I do feel it’s worthy of a purchase either on the Virtual Console or the eShop.

Available today on: Switch Online  – (Updated as of Spring 2022)