Onward to the next installment of the Mega Man series, and what might be the most popular. At first glance, Mega Man 3 might seem like just more of the same (which is partially true). The base storyline and game design are nearly identical to its previous counterparts. However, in this game we’re slowly introduced to a little more of the lore behind the Mega Man universe.

This time around, Dr. Wiley claims to have been rehabilitated. In fact, he begins working with Dr. Light on a new project. It is during the research for this new experiment when (you guessed it) the world’s robots go berserk! Well, as you have probably figured out, Dr. Wiley is behind the whole thing! Mega Man sets out to save the day.

At several points during the game, Mega Man encounters a strange robot, “Break Man”, who is equipped with an arm cannon much like Mega Man’s. In the game’s conclusion, this same character appears and rescues Mega Man from certain doom. It is revealed in the end credits that “Break Man” may actually be Proto Man. The prototype version of Mega Man. Ooh… mysterious. 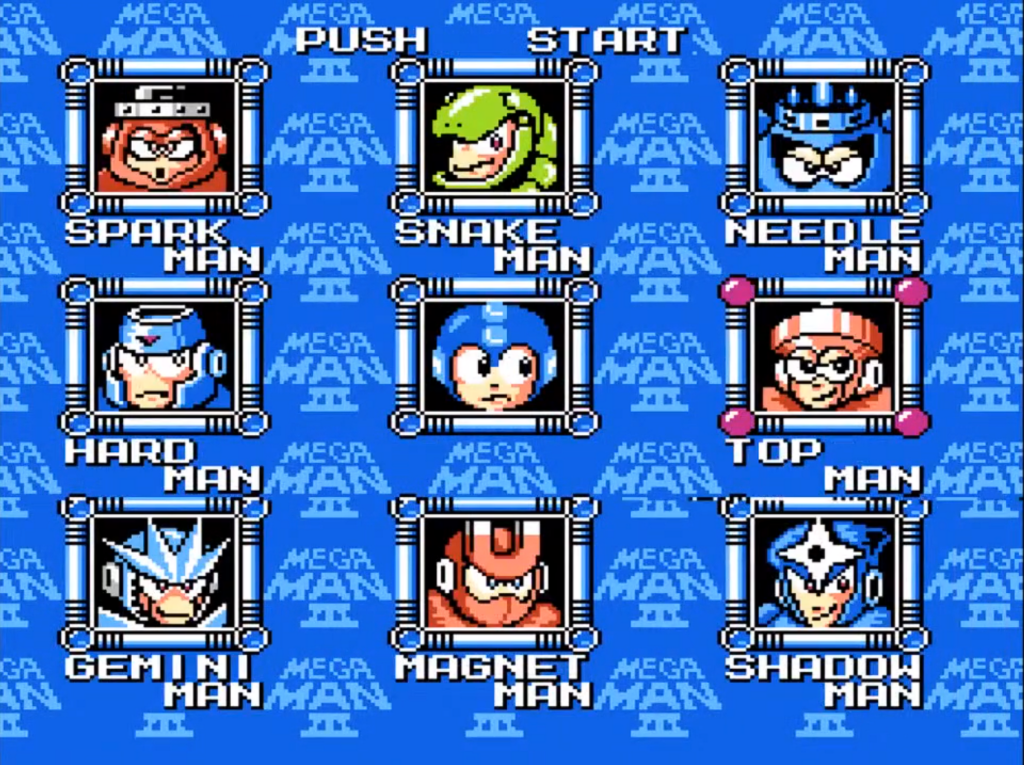 The introduction of Proto Man is a pretty neat dive into the Mega Man backstory. But he’s not the only new character in this game. Mega Man 3 also introduced Mega Man’s robot canine companion, Rush. As Mega Man progresses through the game, Rush can be upgraded with parts that Mega Man finds. This allows Rush to transform into various objects that can be used by Mega Man (a spring pad, a flying jet, etc).

These new gameplay mechanics introduced with Rush are certainly welcome. But that’s not the only new trick up Mega Man’s sleeve in this entry! This is also the title where Mega Man learns his signature ground-slide move. 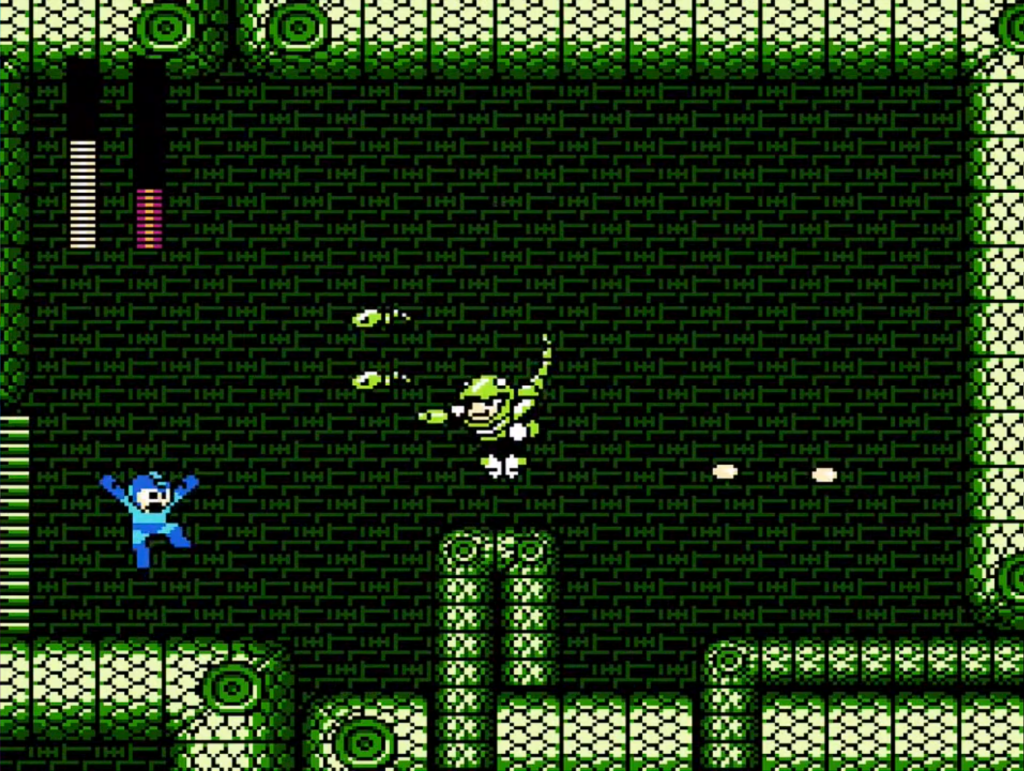 Aside from the additions mentioned above, the game plays very much like the first two installments in the series. It’s fun to sit back and see just how the Mega Man games continue to evolve with each installment. But for many, the pinnacle of the original games is found with this title. In many ways, it is true, this game captures the quintessential Mega Man experience for the NES. But as Capcom will show us, there’s always more that can be packed in.

Stay tuned in the coming days as I review the next chapter in the Mega Man series. 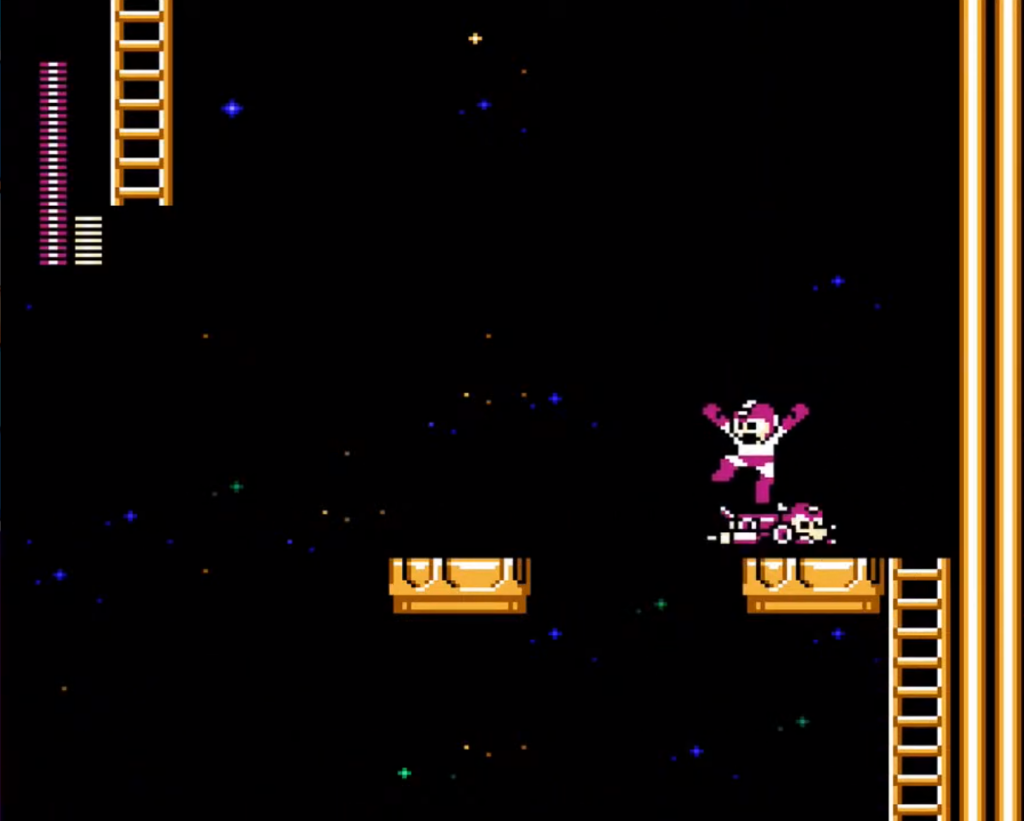 Difficulty: Difficult  – The difficulty here is about on par with Mega Man 2. Again, Not easy, but not impossible. Might be a little frustrating for young kids.

Story: For most of the background story, you will have to turn to the original manual. There are some details scattered throughout the game concerning Proto Man. But for the most part, it’s a recycle of the previous two entries

Originality: At this point, a pattern is starting to develop in the series. Three games with virtually identical gameplay. While one might argue “if it ain’t broke, don’t fix it”, sooner or later the formula is bound to get stale.

Soundtrack: Catchy in places, but not as good as Mega Man 2. Overall, a good soundtrack though. Many of the tunes are iconic pieces in the annals of 8-bit music.

Fun: At face value, Mega Man 3 is an enjoyable title. If you like Mega Man, you’ll love the game. If you’re looking for something new, you may not find this title all that enjoyable. However, for those new the series, this is another nice starting point.

Playcontrol: Same as the previous games. No glaring problems, but still a touchy platformer. Plays best on the original NES controller, IMO. But no real issues with modern hardware.

Overall score (1-100): 85 – Overall, a solid game. MM3 is another fan favorite. It is iconic for introducing both Rush and Proto Man into the mix. But it lacks some of the magic that Mega Man 2 had in my opinion.