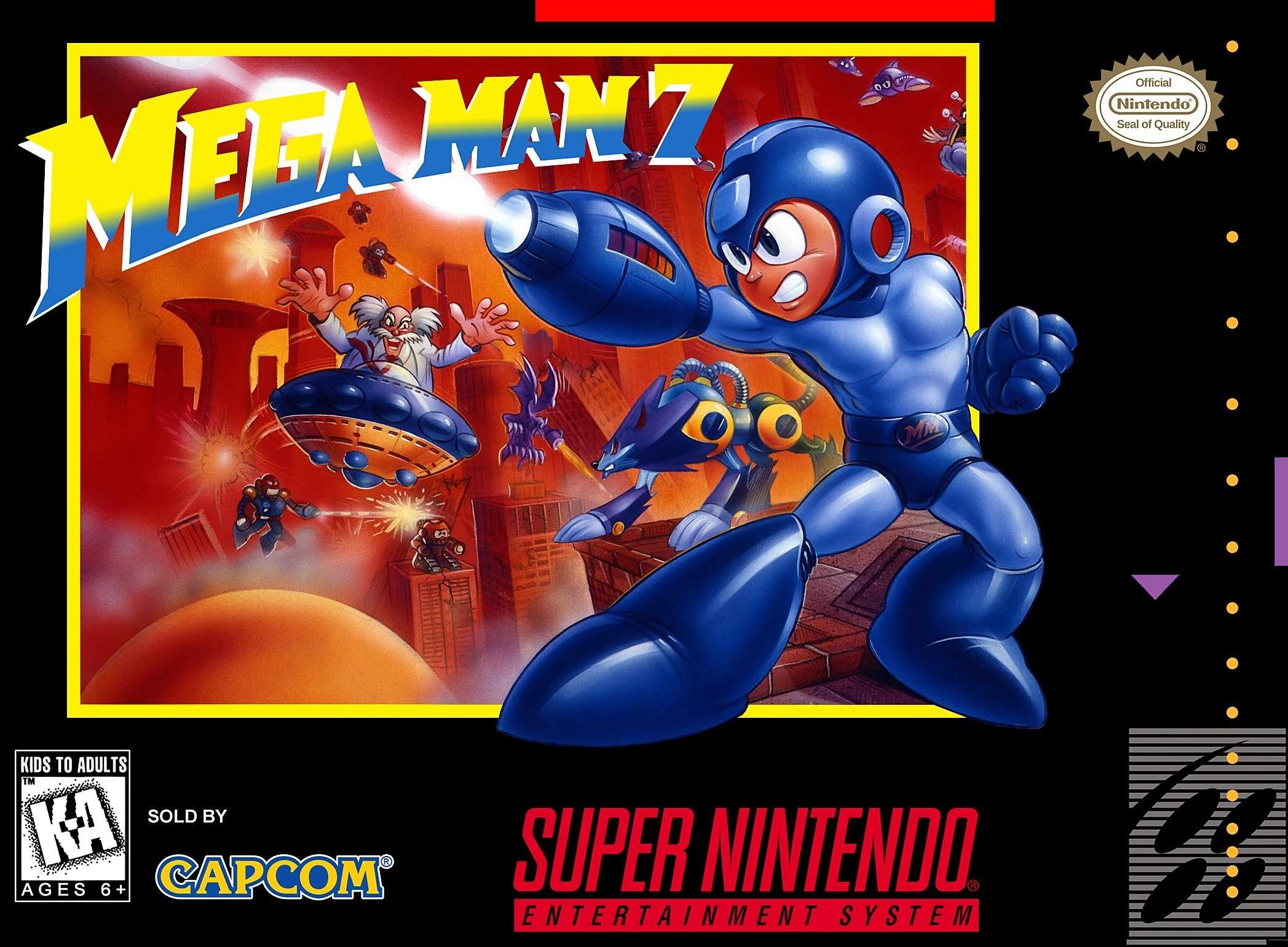 I was originally going to put my marathon of Mega Man games on hold for a while and continue to focus on other 8-bit titles instead. But, considering that it’s Mega Man’s 25 anniversary, I figured now would be a good a time as any to play through the rest of the series. So, with that being said, this brings us to the first 16-bit game in the franchise, Mega Man 7.

Hail to the most gut-wrenching, fist pounding, hate-your-life, hard-as-nails Mega Man game of all time. (At least so far).

I’ll elaborate on that statement in a bit. But first, let’s talk about some good things. To start with, this game looks great! The SNES brought Mega Man a much needed upgrade in the line of visuals. The sound is much improved too. There’s actually even a -gasp– improved storyline – complete with in-game dialogue. Finally, we have a Mega Man game that does not seem like nothing but a bunch of recycled ideas.

The game starts with a flashback of all of Mega Man’s accomplishments, ending with Mega Man turning Dr. Wiley in to the authorities. As the story goes on, we learned the Dr. Wily had a back up plan… It seems that upon his inevitable incarceration, several robots were programmed to come searching for him. As expected, the robots break him out of jail and start tearing up the city! Dr. Light and company catch word of this and send Mega Man into action.

As Mega Man begins his journey to stop the robots he has an unusual encounter! The meets up with a mysterious black robot, named Bass and his robo-canine companion, Treble! Bass tells Mega Man that he is going to bring Wiley to justice, and warns him to back off before blipping away. Hmm… 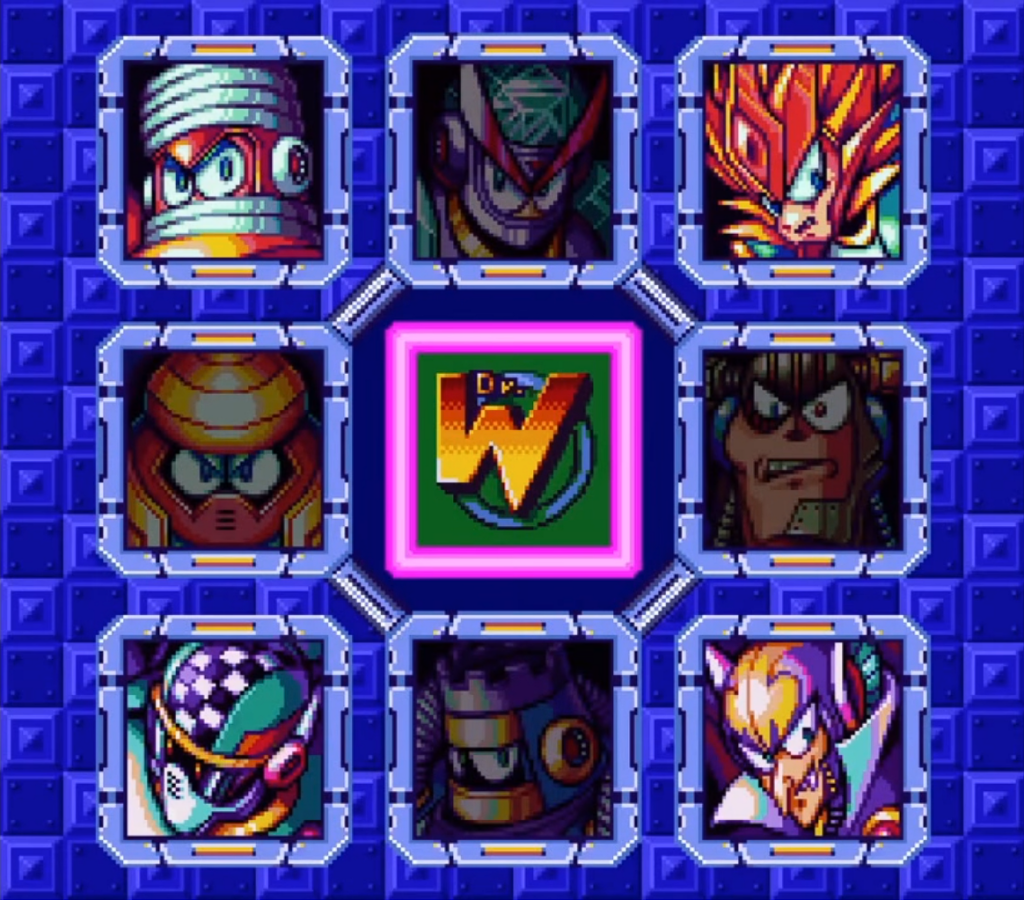 The game is divided into two sections The first four robots Mega Man will face are: Junk Man, Cloud Man, Burst Man, and Freeze Man (I did them in that order).

After defeating the first set of robots, Mega Man gets word that Dr. Wily has been seen raiding the robot museum! Mega heads over to the place an encounters a few old friends…

The next phase introduced four new robot masters: Slash Man, Shade Man, Turbo Man and Spring Man. These guys and their respective levels are HARD. So hard in fact, that I nearly gave up. I did Spring Man first, followed by Turbo Man, Slash Man and finally….. the most aggravating boss I’ve faced so far in the series: Shade Man…. (You’ll see why if you ever play it). 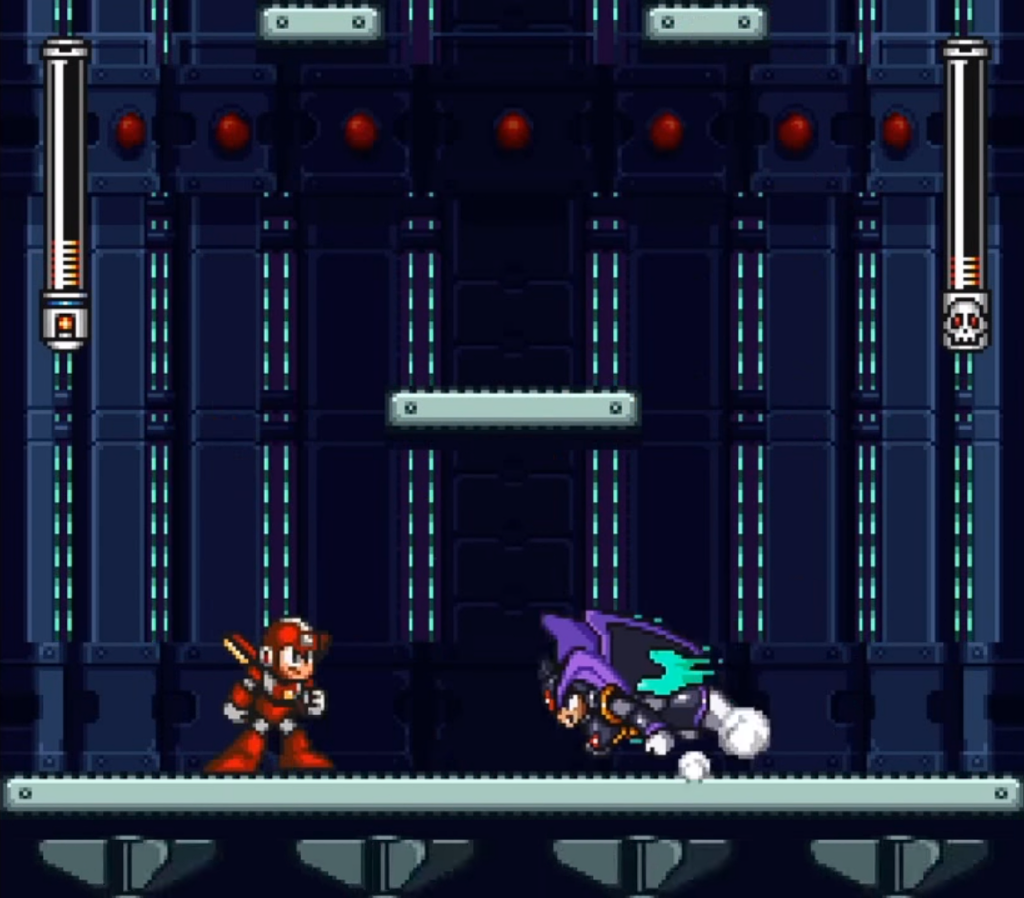 Mega Man 7 is a little different than the previous installments. As mentioned above, some levels are locked-out at the start of the game. But that’s not all. This time, scattered throughout the levels are various nuts and bolts that Mega Man can collect and then trade in exchange for new parts and power ups. There’s also the letters spelling out “RUSH” that can be collected to allow Mega Man to upgrade his companion. These are welcome changes as they give the player more to do than simply tackle level after level.

Aside from the changes mentioned above and having a more detailed story, the gameplay itself is pretty much identical to other entries in the series. It’s more classic platforming action.

For me, the first half of the game wasn’t too bad. It was tough, but the difficulty really ramps up when the second set of levels become available. I never played this game as a kid. If I did, I doubt I would have lasted long. Even now as an adult, I kept getting frustrated and disgusted with the difficulty of the title. It wouldn’t have been so bad if I just ran through it. But I feel compelled to unlock every item and weapon and find all the secrets.

Still, I have to give Capcom credit for keeping their games challenging. At this point it’s clear, Mega Man games are not for the faint of heart and this game proves it. For many, that will be a major turn-off. Still, now that we have a serious storyline to follow, there’s finally some motivation for the punishment. 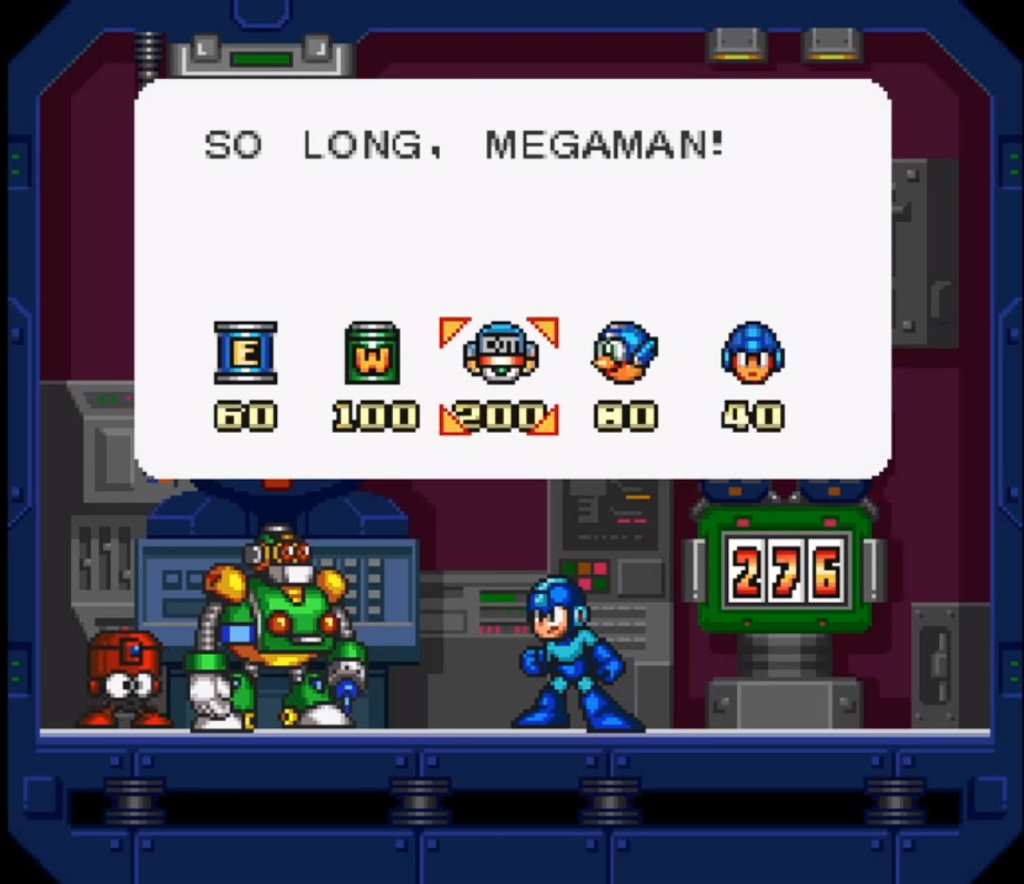 Difficulty: Very Difficult  – I mean it when I say that this was one of the hardest platformers I have ever experienced. It’s really quite ridiculous. I don’t know, maybe it’s just me, but the difficulty level seemed a little too extreme for anyone but the most hardcore players.

Story: About time!! We finally have a really good story in this series. I think this has a lot to do with timing. Mega Man 7 was released in a time where Mega Man manga comics had become very popular in Japan. As a result, a lot of the lore and developments from the books were introduced into the game. It’s a very welcome change, plus the game has a cliffhanger ending!

Originality: While the premise is basically the same, the addition of an active storyline really adds a little originality to this title. This is a step in the right direction for the series.

Soundtrack: Finally we have a good Mega Mega soundtrack again. It’s been a while, but the Blue Bomber’s first foray into 16-bit territory takes good advantage of the SNES sound system. Big improvement over the last few games in the series.

Fun: While I had a blast progressing thru the storyline, but I found the challenge to be a big buzzkill. I spent more time pissed at the last half of the game than I did enjoying it.

Graphics: Capcom REALLY took advantage of the new power behind the Super Nintendo. The graphics in this title are amazing. The series keeps its cartoon look, but with the addition of more colors, the game really pops and comes to life. Great stuff all around.

Playcontrol: I have a big gripe here. This handling of the controls felt very out of sorts for me. It does not handle like the previous games at all. I got used to it over time, but it feels slightly delayed and unnatural. Then again, I’m playing a PS2 port as part of the Anniversary Collection and not the original SNES version. So perhaps that is the issue.

Value: Unlike the original NES games, a version of Mega Man 7 has not been released on the Wii Virtual Console. If you want to get the best value, this game is also included in the Mega Man Anniversary Collection for PS2, Game Cube or XBox for around $30.

Overall score (1-100): 55 – This is really nice addition to the series and a good upgrade when compared to the older Mega Man titles. However, due to the difficulty level, I cannot recommend it for everyone. Which is a shame. I’m all for challenge in games, but this seems too extreme for a game that visually appeals to children