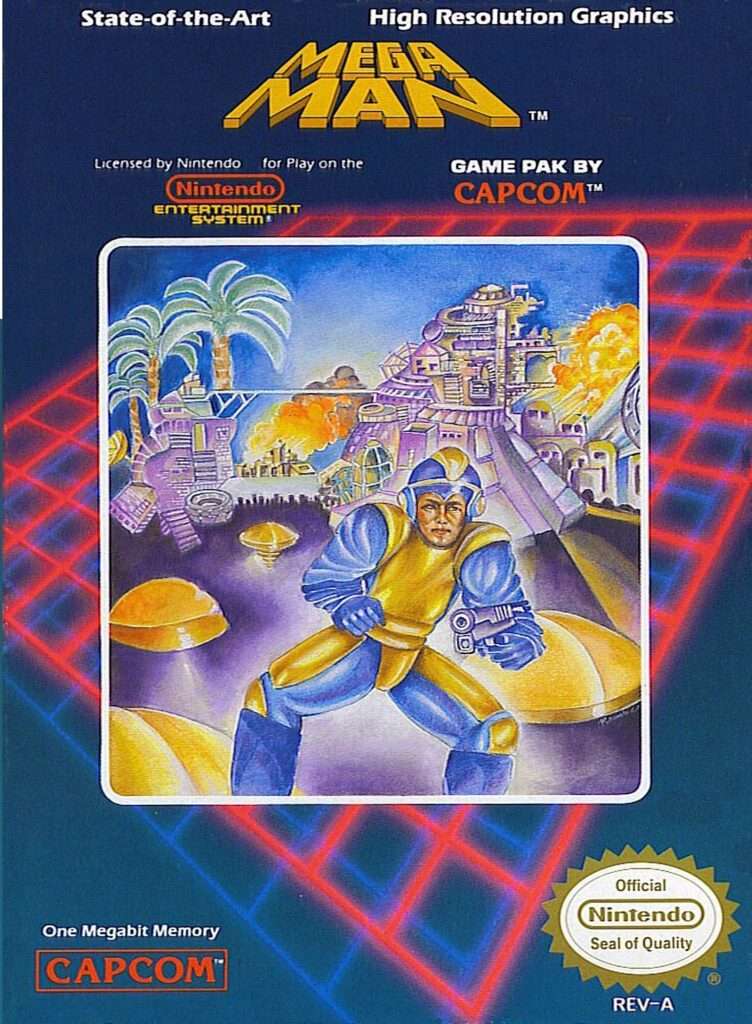 Today, I felt oddly sadistic. While browsing thru my 8-bit library, looking for a new retro classic to play, I came upon the original Mega Man. As soon as I saw it, I realized it had been a while since I dished out such a brutal dose of punishment upon myself, that today had to be the day. Yes, I’m being a bit tongue-in-cheek about it, but it’s true, this game is hard. It will make you cuss. But it is also a classic that needs to be discussed.

I first encountered the game as a rental from the local video store when I was just a kid. I was probably nine or ten the first time I played it. After spending maybe a half an hour with it, I promptly put it up and asked my dad to return it. Fastforward a couple years and I find myself living in Japan watching my Japanese friends play “Rockman 3” and I knew I had to try the series again. In Japan, Mega Man is known as “Rock Man“. (Think “Rock” as in “Rock n Roll”). For the American audience, Capcom decided to westernize the name a bit, and thus Mega Man was born.

For years, the only way to play this game was on the old school NES. When the Wii was introduced, the game became available digitally on the Virtual Console. However, the purposes of this playthrough, I’m playing the version found on the Mega Man Anniversary Collection for the Playstation 2. This collection complies the first eight games into one anthology.

The premise for Mega Man is simple. In the future, people have come to rely on robots for almost all manual labor. There are robots for landscaping, construction, housekeeping, etc. All is well and good, until one day an evil scientist, Dr. Wily reprograms them all to take over the world! Out of a sense of duty, Dr. Light (the scientist that invented all of these robots in the first place), modifies his own personal assistant, Rock, into a combat robot known as Mega Man and sends him out to defeat Wiley’s robot terrorists. Mega Man has the ability to change his programming to mimic the skills of any other robots he has defeated, thus gaining their powers for his own use. 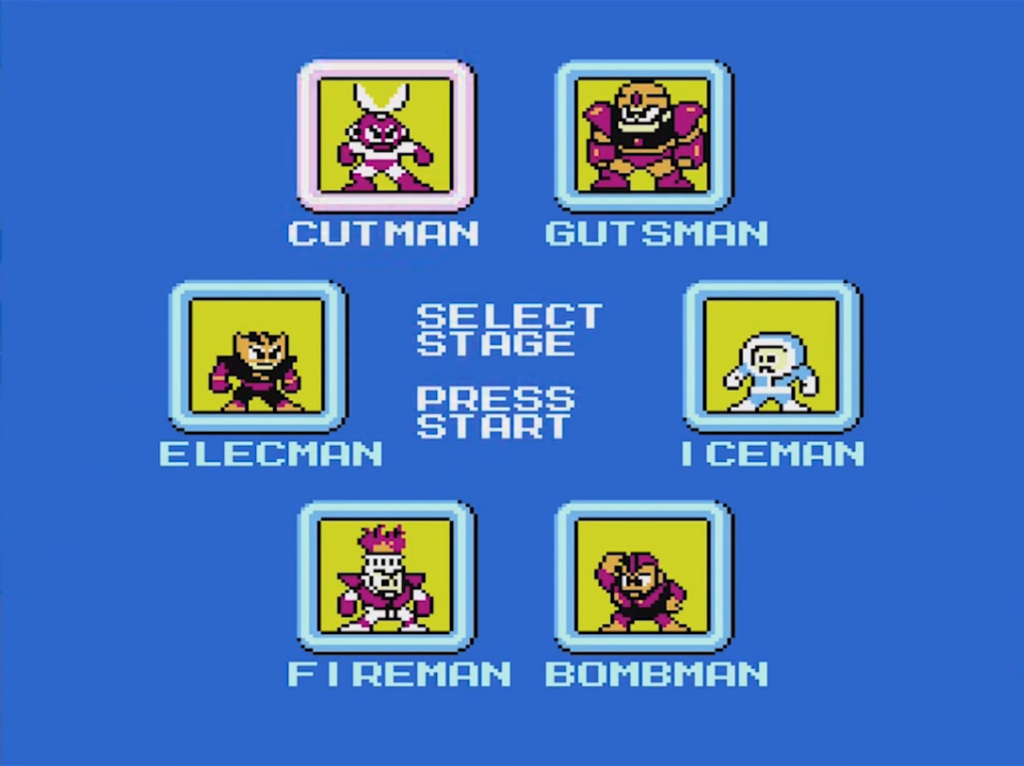 If you can get past the the TERRIBLE boxart, inside you will find a rather pleasant looking anime-style sidescroller. This game is famous for being the one of the first (if not THE first) NES titles that allows the player to select which level to play. After the title screen, the first thing you see is the stage select menu. The basic premise of the game is this, each robot master has a special ability, Mega Man enters their zone and fights his way to their lair. Once a particular robot master is defeated, Mega Man gains the ability to use their special power.

This is helpful because some robots are weak against certain attacks. For example, Fireman is weak against Ice. So… with this in mind, it’s easier to beat Fireman using the special power you can earn by defeating Iceman, etc. The whole thing is basically one big elaborate rock, paper, scissors game.

When introducing the game to my son, he had a blast dictating which robot he wanted me to challenge. Of course, there’s a “correct” way in which to robots should be tackled, but letting him choose made the session all that more fun. 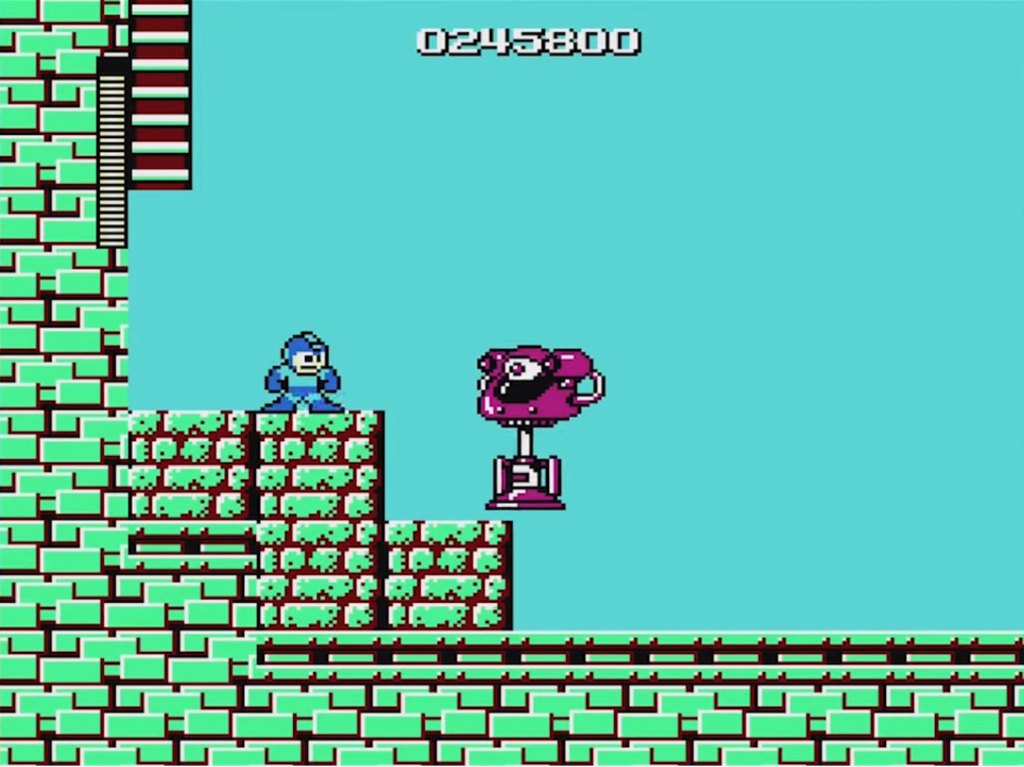 I mentioned above that this game is known for its difficulty. I’m not joking about that. It really is tough. This game throws every dirty trick at you that you can imagine in a platformer title. Disappearing floors, swarms of enemies that come out of nowhere, pixel-perfect jumps, you name it.

The worst offender is probably what I call the “phase blocks”. Imagine a giant pit that spells instant death for anyone who falls into it. Well, in order to get to the other side, you need to hop across a series of blocks that blink in and out of existence… It doesn’t sound bad, bit it is. It’s enough to make you want to tear your hair out!

But despite the difficulty, Mega Man is a classic. The whole “rock, paper, scissors” concept is unique and the art direction is nothing short of excellent. There’s so many wonderful things about this game that it’s difficult to put into words. I’ll let me breakdown below spell out the details: 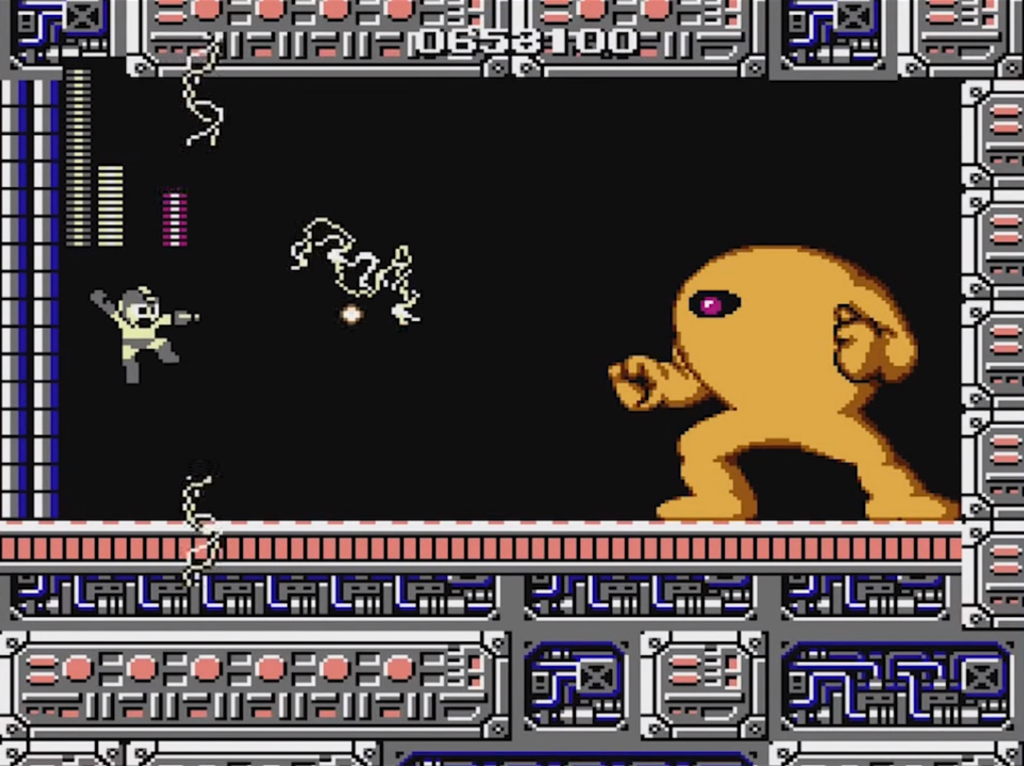 Difficulty: Very Difficult  – As I mentioned earlier, this game is insanely hard. There are timed/vanishing platforms, falling obstacles, unforgiving mini-bosses, you name it. On top of that, there’s no option to save or continue! It’s a handful. But there is a very nice sense of accomplishment once you have completed it.

Story: The story behind Mega Man is a pretty interesting concept. It seems a bit shallow at first, and it’s not really eluded to much within the game itself. A friend once described it as it is sort of like a soft and cuddly version of  The Terminator. Now, I’m not sure that’s an accurate description. But yes, the story behind the game is unique and fun.

Originality: There was a lot of new concepts brought to the table here. It may not seem like much today, but the level selection idea was revolutionary at the time. So was the concept to collecting powers and abilities from defeated enemies. Pretty groundbreaking stuff for its time.

Soundtrack: There are some really catchy tunes here! Mega Man features music that you’ll be humming after you’ve turned off the game. But believe it or not, the later games in the series blow this one away.

Fun: Breathe deep, don’t get stressed and you just might enjoy yourself. These days, I play MM for the nostalgia and the cute anime style graphics. But it’s easy to get turned off by the high degree of difficulty.

Graphics: The bright colorful anime art really shines on the NES. This was one of the first games that really got this concept right. It’s very cartoonish and it works well.

Playcontrol: The control of the game is not a really an issue. The NES controller works as expected (as does the PS2 controller for the Anniversary Collection).

Overall score (1-100): 80 – The only thing that stops this game from getting a better score is the difficulty level. Everything else about Mega Man was really jaw dropping at the time. It’s a semi-rough start into what turned out to be one of the more iconic game series of the 80’s.