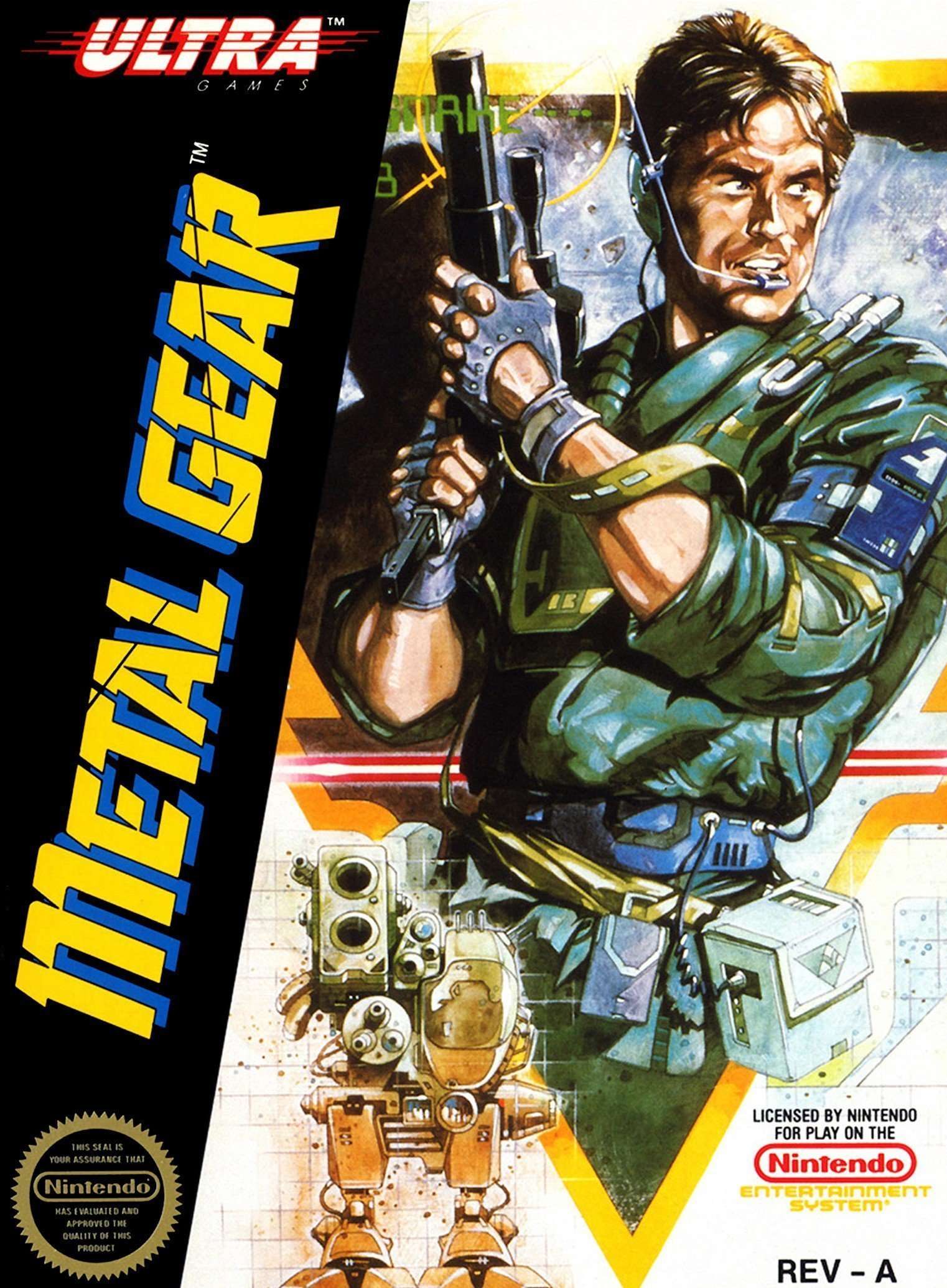 I have waited a long time to write this review. As a kid, one of my favorite games on the NES was Metal Gear. When playing a game, it usually it takes me a little time before I’m fully invested. But this was one title that hooked me from day one. The fact that I fell in love with this game like I did surprised me. Until this point, I usually played action games or RPGS. But the stealth-based premise and military intrigue just fascinated me to no end. In fact, I daresay this is the title that sparked my interest in other military-themed games and even films.

Metal Gear was not your typical NES game. It was not a side scrolling platformer, nor was it a fast paced action game. Instead it is an overhead, screen-by-screen, stealth-based title. In some respects, the play controls and style are a bit like The Legend of Zelda. Except, in this game, instead of rushing into an area headfirst with your weapons out, you want to sneak by enemies, undetected if possible.

As you explore, you will find a number of various items and weapons. Every item, no matter how obscure, has a use. Part of the fun is figuring out how things like cigarettes and cardboard boxes can be useful when sneaking your way through a fortress. The same is true for weapons. While any soldier can be taken out with a pistol, firing a gun in the halls of a compound is sure the attract attention. With that in mind, it’s often best to shy away from pistols and machine guns and try to take out bad guys using your fists. Of course, there are times when it’s appropriate to break out the big guns. There’s plenty of heavy weaponry available for players to find and use. And you will get the chance to use them. Different bosses in the game are weak to different weapons. For example, tanks may be weak to landmines while other types of encounters require a different weapon.

The story of Metal Gear is actually pretty involved. But you’d never realize that by reading the game manual that came with the North American version. For some reason Konami (publishing under the name ULTRA), had a bad habit of turning many of their serious games into a comical mess during the western localization process. Why they felt the need to do this, I’ll never understand. The North American instruction booklet gives goofy names to all of the villains and turns the overall scenario into one big joke. I find this to be completely pointless and infuriating as the game actually has a pretty intense story.

In this game, you play a black-ops Special Forces agent code-named: Solid Snake. Snake is a member of a secret unit known as FOXHOUND. The game starts when Snake is sent on a search-and-rescue mission. His goal is to locate and free another FOXHOUND agent known as Gray Fox, who is being held in a secret military installation called “Outer Heaven” somewhere in the jungles of Africa. Gray Fox was previously sent to infiltrate the base and determine the validity of reports regarding a superweapon known as Metal Gear. However, during his mission, Gray Fox was captured and imprisoned.

The game itself begins with Solid Snake sneaking into Outer Heaven. It’s the player’s job to try to avoid detection while collecting intelligence needed to locate Gray Fox. One really neat feature of the game is the “Transceiver” – a radio that will sound off from time to time to give the player hints and background information. Initially, the only person you can contact on your radio is your commander, known only by his codename of “Big Boss”. However, as you progress through the game you will make contact with other team members.

Eventually, it becomes clear that the Metal Gear project is real. Metal Gear is a heavily armed walking tank, equipped with a nuclear arsenal. Thankfully, it has yet to be completed. As Snake continues to dig deeper into the mystery of Metal Gear, he soon learns there’s much more than meets the eye to both the weapon itself and the organization behind it.

What a great story right! Sadly, if you’re playing the NES version of the game, you get a really watered down version of the above events. The translation team did an absolutely horrid job on the localization. Not to mention the various spelling errors and senseless text littered throughout the game.

Thankfully, there is an alternative. The NES release of the game is in reality a very poor port of a much superior version. The original Metal Gear was released on an obscure home computer system known as the MSX. Thankfully, the original version of the game has recently been made available in the USA as part of the Metal Gear Solid HD Collection. Having played thru the NES version countless times, I decided to experience the original MSX game for the sake of this playthrough.

Several differences were immediately apparent. First of all, the music in the NES version seems to be vastly superior in my opinion. The Nintendo port of Metal Gear is packed with a great in-game soundtrack. While the music in the MSX version seems really weak in comparison. But aside from the soundtrack, the MSX version is without a doubt the definitive Metal Gear experience.

For the most part, the majority of the game is pretty much identical regardless of which version you play. There are a few exceptions, however. In the MSX version, Snake infiltrates the compound via an underwater channel instead of parachuting into the nearby jungle. Also, in the NES version, you never actually battle with Metal Gear itself. Instead, you have to blow up the super computer that controls it. Now, I have no idea why these changes were made. They don’t seem to make a lot of sense from an artistic standpoint.

This all puts me in a weird position. I still like the NES release for many reasons. Number one, it holds a bit of nostalgia for me. Plus, the music is much more catchy than the MSX version. On the other hand, the original MSX version has a more serious and gritty tone. But in the end, if you’ve never played either game, the MSX release is probably the one you should look into.

Regardless of the version you choose, there’s some pretty innovative gameplay to enjoy. At the time this game was released, the concept of avoiding battle in games was almost unheard of. Avoiding detection and distracting enemies makes for some surprisingly suspenseful gameplay. When I was young, Metal Gear was unlike anything I had ever experienced and even today, it still holds up as an incredible game. 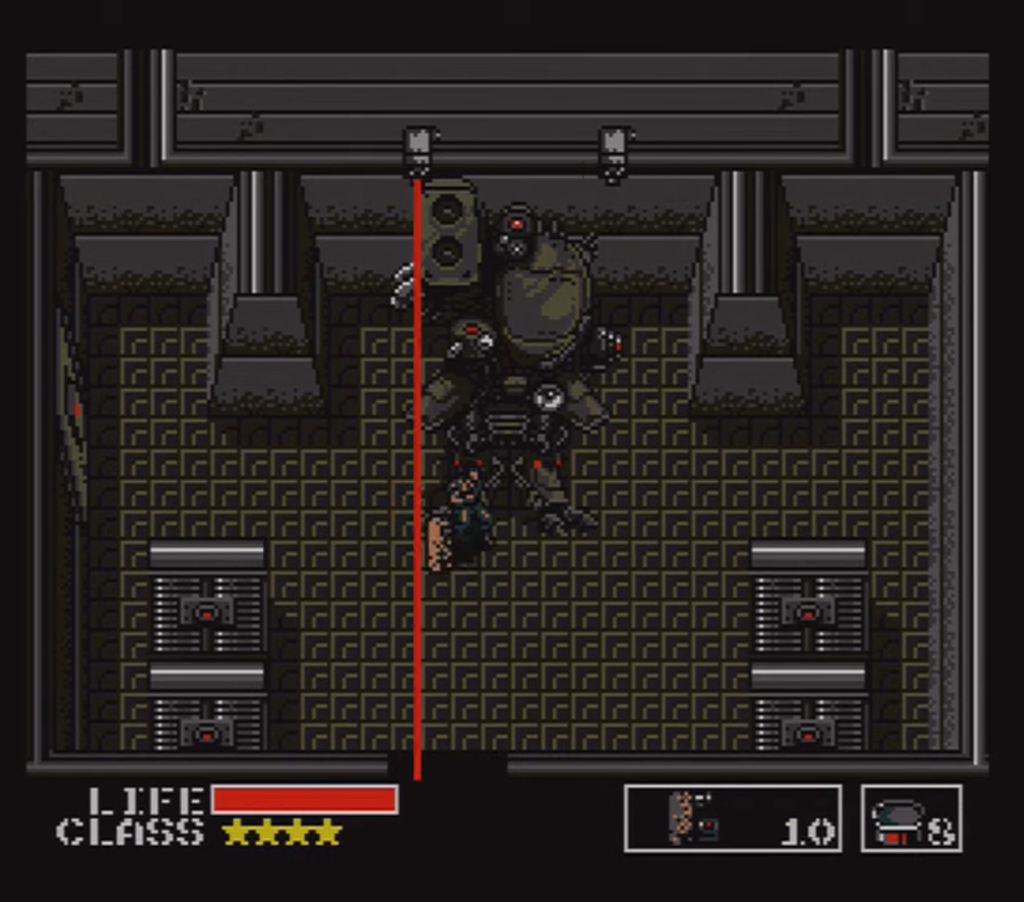 Difficulty: Medium  – Once you have mastered the art of sneaking around and you’ve managed to earn a little gear, the game is not overly difficult. However, until you reach that point, things can be pretty tough.

Originality: The whole concept of “not engaging the enemy” was something completely new at the time. When playing the game, you have pay attention to which direction guards are facing. If you walk in front of them, they will see you and attack. Patience is key, you have to learn to hide behind walls and only to move at the proper time. This was really some great innovation at the time.

Soundtrack: As I stated earlier, the NES version wins this hands down in my opinion. The MSX music is appropriate, but it doesn’t seem to be very inspiring.


Fun: It doesn’t matter how times I play this game, it’s always a good time. As I said earlier, patience is key. If you intend to storm through this game “Leeroy Jenkins” style, you won’t have a very good experience.

Graphics: For the most part, both ports of the game are similar graphically. The MSX version does seem to win out here by a margin. I do feel that either one could have looked a little better with more effort (I’ve seen better art in 8-bit titles). But in a weird way, the gritty/dirty look of the game is actually quite fitting.

Playcontrol: As far as responsiveness goes, there’s no issues at all. Sneaking around takes bit getting used to, but the game handles well.

Value:  The best way to get your hands on this game is through the Metal Gear Solid HD Collection. This game is available for around $30-$40 on average.

Overall score (1-100): 90 – Even though I’m officially reviewing the canonical MSX version, both games get high marks from me. Metal Gear is one of those must-have games. I highly recommend it.