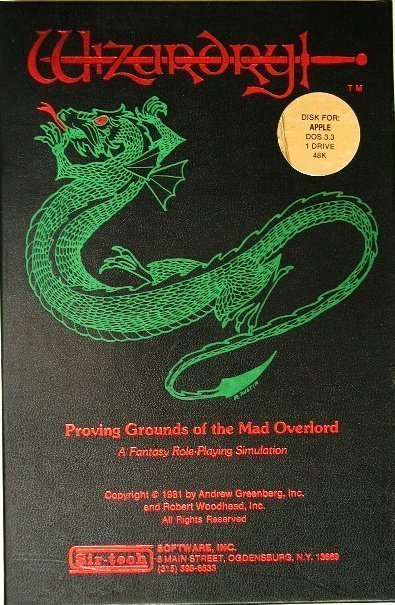 With the North American release of Wizardry Online only a few days away and my playthrough of legacy Nintendo titles at an end, I recently decided to revisit one of my favorite RPG game series of all time: Wizardry. In case you are unfamiliar with the series (and younger gamers are), when it comes to CRPGs, Wizardry is often hailed as the grandaddy of them all. No, technically it wasn’t the first ever computer role playing game. But, it was one of the first ones that successfully merged almost all of the elements of a tabletop RPG with the power of a home computer.

I mentioned early on this blog that Wizardry was one of the first PC games that actually hooked me. My family didn’t own a PC until I was in my early teens, so originally I played Wizardry on my friend’s old black and white Macintosh. Over the course of one summer, we stayed up until the wee hours of the morning, exploring the numerous dungeon passages of Wizardry. A few years later, Wizardry  and Wizardry II were released for the NES. I wasted no time in acquiring those releases and spent a lot of time with the NES ports as a teen. The NES ports were very true to the originals, and they looked considerably better. But, the NES versions lacked one critical feature that really made the Wizardry games unique: the ability to transfer characters between the games. As much as I loved the NES ports, I always wanted to see what it would be like to move my super-strong party from the world of Wizardry to Wizardry II.

Eventually a collection known as the Ultimate Wizardry Archives was released in the late 90’s. For the first time, the first seven games in the series were bundled into one package and I was able to play through them all again (including Wizardry III and IV – which I missed the first time around). And this time, because the collection contained the PC versions of the games, transferring your characters between the scenarios was again possible!

The story of Wizardry is quite simple, the evil wizard Werdna has stolen a magical amulet from the kingdom’s overlord, Trebor. Desperate to retrieve it, Trebor is recruiting any adventurers brave enough to accept the challenge. To play, you must create a variety of characters and assemble them into a party of no more than six members. Once a party is formed, they venture down into the depths of Werdna’s great underground labyrinth. The maze is filled with monsters, traps and treasure. The challenge is not to be taken lightly, one wrong move and you might find your whole team obliterated. Yes, Wizardry is the classic tabletop dungeon crawl brought to the computer.

When creating characters, players can choose from the following races; Human, Elf, Dwarf, Gnome, and Hobbit. Each race starts with a specific number of points assigned to each attribute. Attributes are as follows; Strength, IQ, Piety, Vitality, Agility, and Luck. These attributes determine the success of various actions. For example, Strength helps determine how much damage a character can deal when using a weapon. Once a race is selected, the player is given a random number of bonus points that can be assigned manually to the different attributes. Attribute points determine what class the player can select for their character.

The following classes are available; Fighter, Mage, Cleric, Thief, Bishop, Samurai, Lord, Ninja. Some of these more advance classes (ie, Lord, Samurai, and Ninja) can be hard to obtain during character creation due to their the high-attribute points needed to create one. Players also have the ability to change class later on in the game. 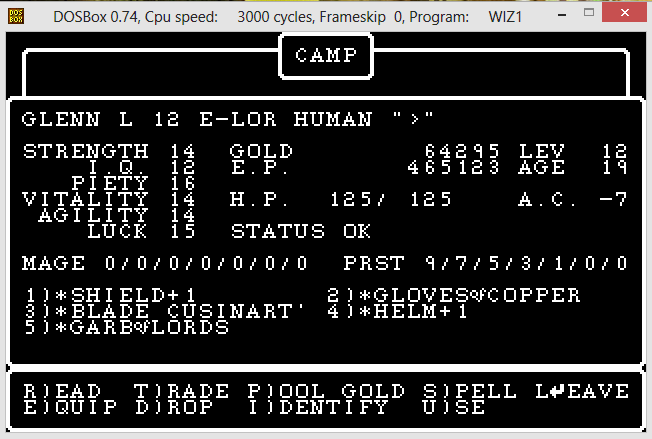 The PC version of Wizardry  is actually one of the most inferior versions of the game. The controls are not intuitive at all. In fact, they are actually pretty cumbersome. But, you do manage to get used to them with time. Also, on the graphics front, the PC games leave a lot to be desired. This version of Wizardry is nothing but a black screen with white wire-frame lines to represent the maze. The only color graphics are used for monsters and treasure chests. It’s important to note that several enhanced versions of the game exist in Japan, but only the NES version has seen the light of day in the US. This is a shame too, as I would absolutely LOVE to experience this game with modern day visuals and ambient sounds.

To play the game these days, a DOS emulator such as DOSBox is required. Luckily, this program is available for free online and a simple Google search for “Dosbox” should bring up plenty of options. 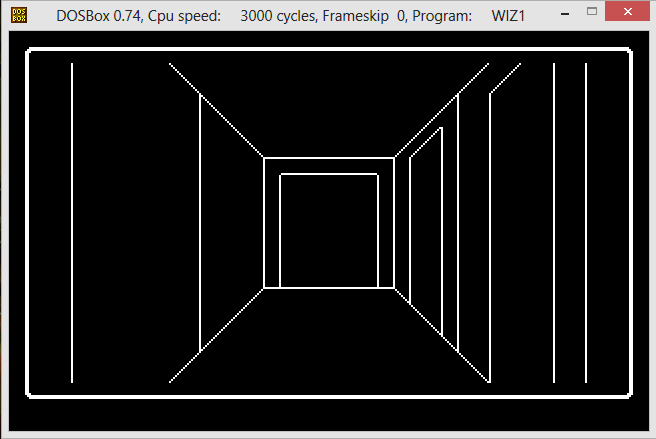 Wizardry has the reputation for being an extremely hardcore game. The maze has no distinctive features and everything looks the same. There are traps and tricks to confuse the player, so following a map is a must. Actually, back in my day, I would map my progress on a piece of graph paper. To survive, players must be extremely patient. Progress can be slow at the beginning. Running back to town to rest after every other encounter is almost a requirement. That’s right, aside from healing spells, the only way to restore your HP is to go back to town and rest at the inn. That’s also the only way to actually level up your character. So, there is a lot of backtracking in this game.

If one of your characters does die, you have two chances to bring them back to life. If the first attempt fails, the character’s body is reduced to ash. If the next attempt fails, the character’s soul is lost forever and you must replace them. In the event that your entire party is wiped out at one time, you can send a new group of characters into the maze to retrieve the corpses. However, your new party will need to be strong enough to survive the journey.

While many aspects of the game may seem simplistic, there’s actually a lot here to digest. There are advanced classes for your characters to achieve, legendary treasures to uncover, and of course Werdna himself. Once your party has defeated the evil wizard, they are awarded with a Chevron that appears on their character profile.  ( ”   >   ”  )  – Characters that have earned this honor can still explore the maze in search of better treasure, but they can also be imported into the next scenario.

As I mentioned before, I spent countless hours with Wizardry as a kid. Despite looking crude and basic, it was one of the most mind-blowing games I had experienced. It left a huge impact that stays with me to this very day. It’s no wonder that it is still considered the Grandfather of all RPG Games. 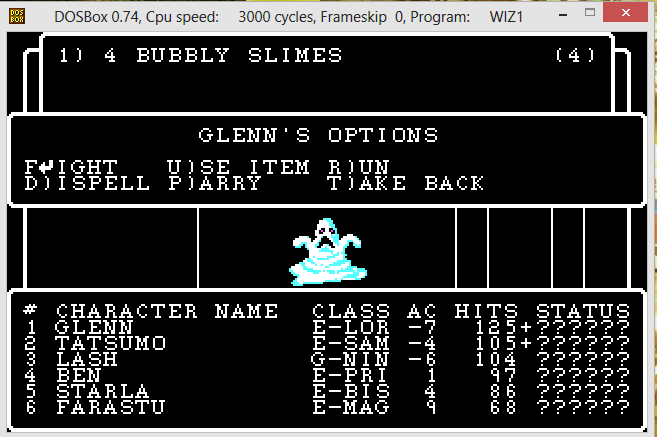 Difficulty: Hard – The game is certainly difficult. There’s no doubt about it. However, due to today’s technology it’s quite easy to cheat. Avoiding death is a simple as sneakily restoring a previously saved character file. But you wouldn’t do that…. would you?

Story: The storyline seems quite basic, but the observant and imaginative player can actually glean a few interesting pieces of lore from certain events that occur while exploring the maze. Admittedly, it does seem that the storyline for this scenario is quite weak and serves only the basic purpose of giving players are reason to set foot in the maze in the first place.

Originality: For many, this game was the first taste of an RPG. The first person view of the maze was something pretty new at the time. It’s obvious that the game was heavily influenced by the tabletop version of Dungeons & Dragons.

Fun: This game can still be fun today, if you have a good understanding what you’re getting into when you play it. Patience is a must, and you have to be willing to shed the skin of modern games and let yourself go back to a simpler time.

Graphics: The PC version graphics were pretty bad. Compared to the Macintosh and Apple versions of the game, the PC makes out the worst. That being said, there’s really not much that could be done at the time. This game was released during a time when PC gaming was in it’s infancy.

Overall score (1-100): 85 – Despite its age and many of its shortcomings. This is a classic game and probably my favorite of the original Wizardry scenarios. This is the game that started it all. Without Wizardry, there would be no Final Fantasy or Elder Scrolls. The game hooked me a kid, and still enthralls me to this day. Unlike most games today, Wizardry gives you the foundation, your imagination takes over the rest of the way. That is something that is sorely missed these days. Still, this game is going to be a hard sell to most modern gamers.