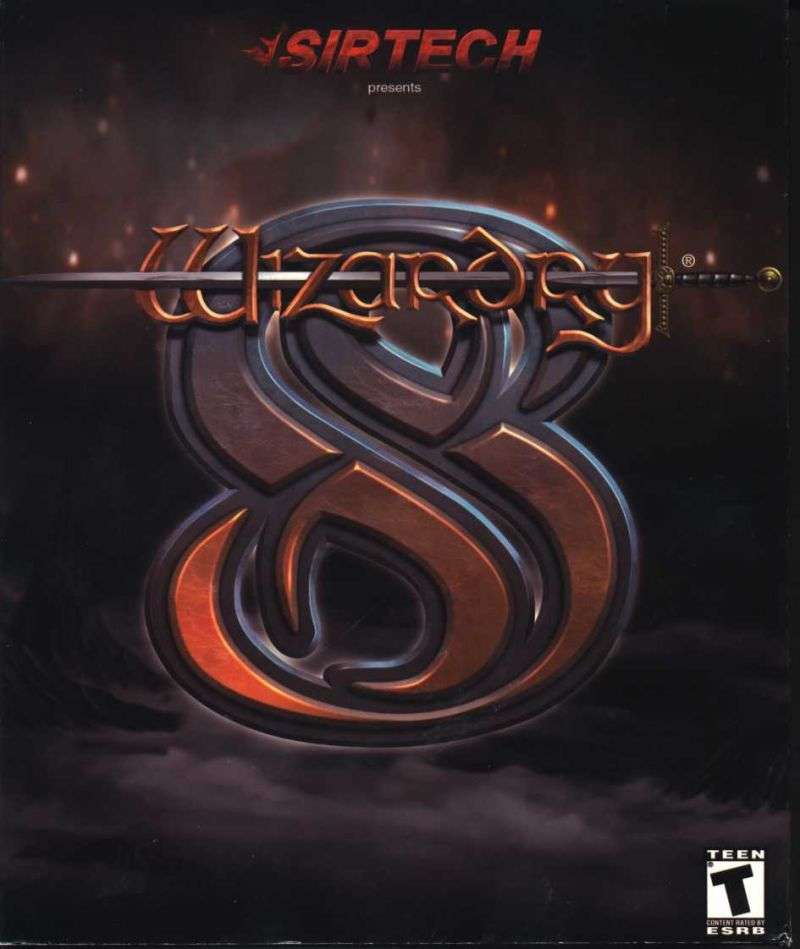 Finally, we have the last game in the original Wizardry series; Wizardry 8. For the first time in the franchise we do not have a fancy sub-name for the game. It’s just “Wizardry 8“. Years ago when I operated Kyler’s Wizardry Den (my Wizardry fan site), I interviewed one of the developers and asked why the choice was made to break tradition and not give this game a meta-name. I was told that the title “Lords of the Cosmic Circle” was bantered around the office quite a bit, but ultimately, the decision was made to simply leave it as “Wizardry 8“. So, for what it’s worth, there’s your “true name”.

When I was a young adult, I waited with baited breath for this game to appear on the shelf. It had been almost ten years since the last Wizardry game was released and I remember telling my girlfriend (now my wife) at the time, “When I get my hands on this game, you will not see me for several days, fair warning.” I was in my zone.

A lot happened to the company of Sir-Tech between the release of Savant and Wizardry 8. Numerous legal wrangling and staff changes caused many Wizardry fans to worry that we would never get that promised conclusion to the story of the Dark Savant. But in the end, Sir-Tech delivered.

Wizardry 8 was released during an interesting time for PC gamers. 3D acceleration was in its infancy and there were many competing technologies at the time. This made it both difficult and expensive to produce a 3D accelerated game. The DOS operating system was a thing of the past and game developers had to work within the confines of the various APIs and programming protocols that Windows provided. As a result, many early 3D games suffered in quality or were laden with bugs. Wizardry 8 was no exception.

It didn’t take Sir-Tech long to patch the game, but sadly they went out of business before most player complaints could be fully addressed. Regardless, many of the game’s developers continued to work on fixing bugs during their personal time and a final “unofficial” patch was released.

Even with a nine year wait between games, Sir-Tech made good on their promise to allow players to import their Dark Savant savegames into Wizardy 8. As a result, the beginning of the game could be vastly different depending on the file that was imported. 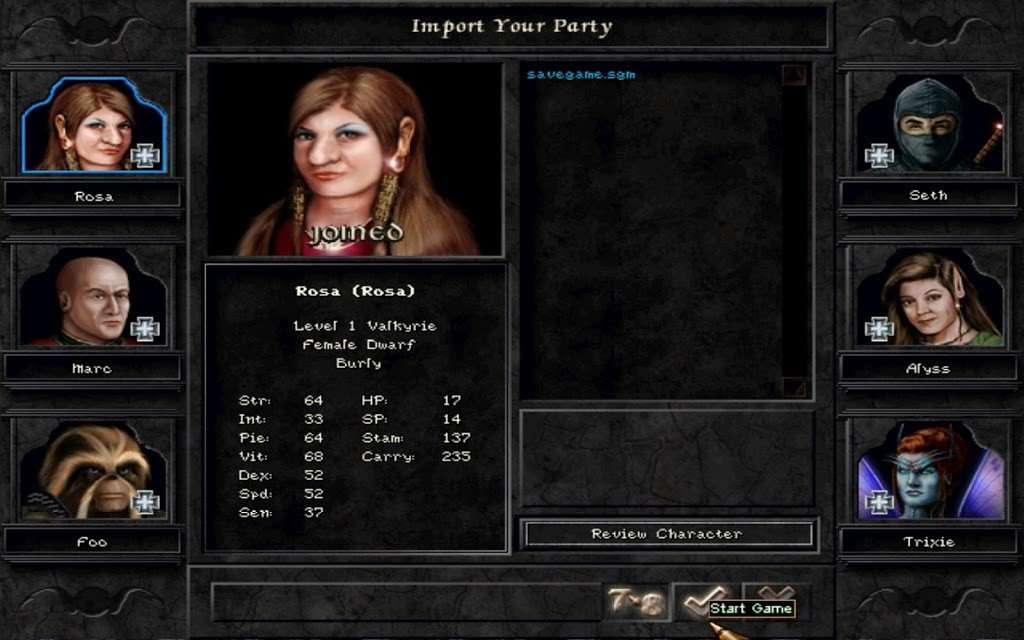 In this entry, the players have pursed the Savant to the world of Dominus. It is here that they begin their quest to recover three lost cosmic artifacts. If they are successful, the will ascend to godhood where they can change the fate of universe and undo all the evils set into motion by the Dark Savant. It’s important to note that during the completion of this title, the true identity of the Dark Savant is revealed… But I don’t wish to spoil it for anyone.

Like the last two entries in the series, this classic CRPG is played with a combination of the mouse and keyboard. The UI has been revamped, but the overall gameplay mechanics should feel familiar to fans of the series. Even though there’s plenty new in Wizardry 8, there are several Easter Eggs scattered throughout the game for the oldschool fans of the series. For example, Wizardry 8 features an IronMan Mode, which restores the difficulty level to that of the original five games, complete with permadeath. There’s also a hidden dungeon to be found towards the end of the game that strips away all fancy 3D graphics and returns the white-on-black wireframe dungeons of yesteryear. Good fan-service from Sir-Tech here!

But despite this, there’s a lot of things about Wizardry 8 that leave a feeling that the game was rushed to release. However, for its many faults, it does stand as one of the last true dungeon-crawling RPGs. With the demise of Sir-Tech, the rights to the Wizardry series were purchased by a Japanese developer. Thus began the “lost years” for the North American audience. Game after game was released in Japan, and sadly, only two of them were ever properly ported for western audiences. I intend to cover those two games another time.

Despite its faults, Wizardry 8 is a classic CRPG and one of the last of its kind. It’s a bit of a tough sell for most gamers, but players who enjoy this type of experience will not be disappointed. 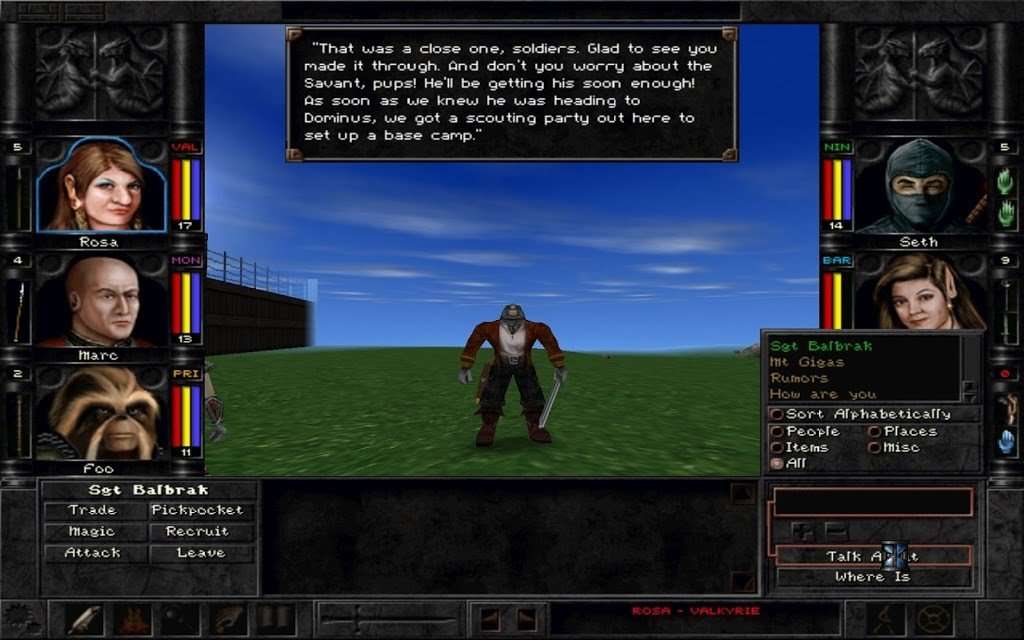 Difficulty: Variable – The default setting for the game is very much like the experience provided by Wizardry 6 and 7. IronMan mode restores the challenge of earlier games. This option was a welcome addition in my opinion.

Story: Despite the long wait between games, Sir-Tech proved that they knew exactly where they wanted to go with the storyline. I had personally feared that the connection between the games would be rather weak. I was pleasantly surprised by the deep integration between the titles.

Originality: There’s a lot of new things here. While keeping the basic game mechanics pretty much the same, Sir-Tech upgraded the world around the player with all of best technology at the time. CD quality music and accelerated graphics add a new level of polish to what is an ancient series. The addition of a new player class is a nice touch for new players.

Soundtrack: As mentioned above, we finally have a CD quality game soundtrack. Complete with music and high quality sound effect. This is certainly a nice addition.

Fun: Many people feel that this game marked the end of an era. First-person dungeon crawlers have become a thing of the past for the most part. This title provides the best of the experience. Ambient dungeons, strange creatures, mystery and adventure… it’s all here and it’s blast to experience.

Graphics: For the first time we have a Wizardry game with graphic acceleration. Of course, by today’s standards the game is blocky and robotic feeling. However, at the time, it featured one of the best visual experiences one could expect.

Playcontrol:  While the UI is clean and clear, I found the controls themselves to be clunky and confusing at first. After a while, things tend to fall into place. But I can’t help but think there could have been a better interface for the game.

Value: Finding legitimate copies of this game are difficult. Boxed copies of Wizardry 8 often sell for around $50 or more. This is a tough price to pay for such an old game. Fans may find it worth the price, more more casual gamers may not.

Overall score (1-100): 85 – High marks for the final entry in Sir-Tech’s epic franchise. Even today, many old school gamers tend to look back fondly on this title. I am no exception. I feel that with today’s technology, the potential for a truly epic and mind-blowing Wizardry experience could easily become a reality. And while I do enjoy several of Japan’s recent offerings, I fear the good old days are finally at an end.