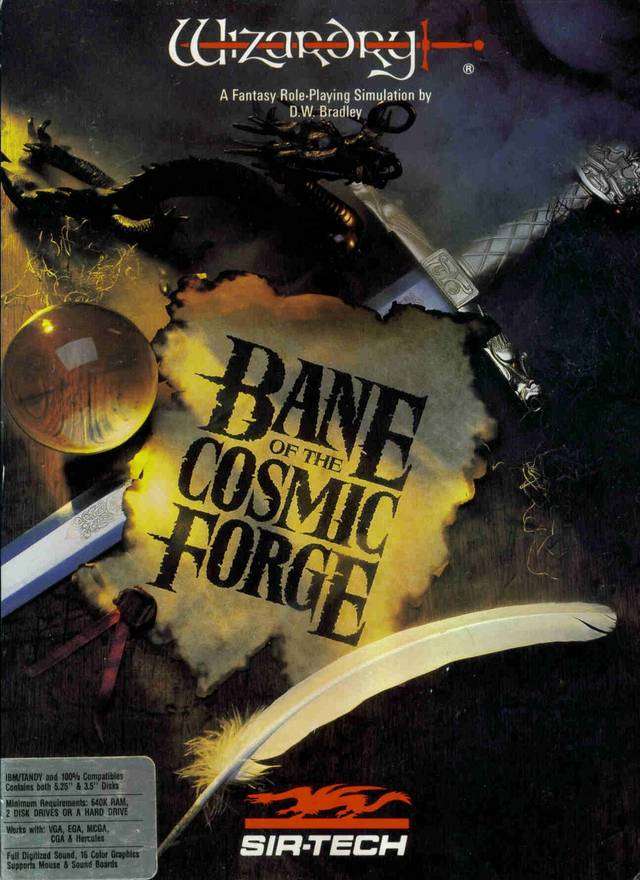 Here we have the sixth installment in the Wizardry series; Bane of the Cosmic Forge. This title is probably my second favorite game in the Wizardry universe. It is the first entry in the series that was completely free from the influence of the original creators. This time, we are presented with a game created completely by David W. Bradley and Sir-Tech Software. This is very obvious due to the radical change in direction that are present in this game.

Bane of the Cosmic Forge actually starts a new chapter in the Wizardry franchise. For the first time in the series, we are given a Wizardry title that focuses just as heavily on artwork as it does story. Color EGA graphics (which were top of the line at the time) transformed the Wizardry world into something never seen before. Also, gone are the days of keyboard only gameplay. Bane features a mouse driven interface, which was very inviting to new players at the time. 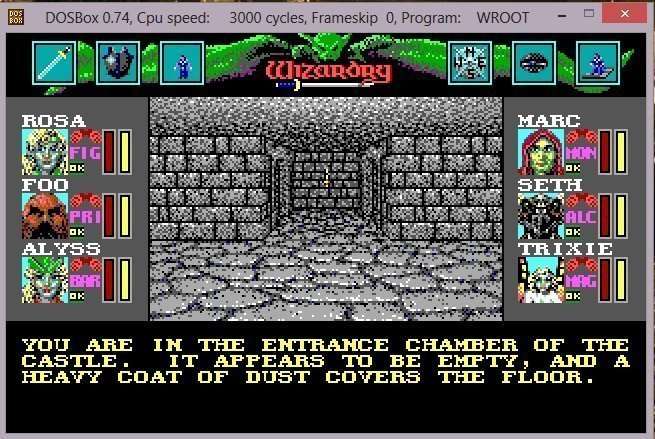 Despite these changes, all of the staples of the series are still here. The traditional races and classes are all included, with new additions to both (Faeries, Lizardmen, etc – for races, and Alchemists, Bards and more for classes). New character skills and a revamp of the magic system are also integrated into the game. (That’s right, it’s time to say goodbye to those cryptic “magic words”)

While the graphical and UI presentation of the game is the first thing many veteran’s notice, the storyline of the game is equally immersing and probably the best in the series so far. The plot begins simple enough, your team of adventurers enter a long abandoned castle in hope of doing some serious treasure hunting. Little do they know they are about to become involved in what will be both a quest of supernatural and cosmic fantasy. In the end, your party is given the opportunity to invoke one of the most powerful relics in the entire universe: The Cosmic Forge. A mystical pen that will turn anything written with it into reality.

The game features multiple endings and once the game is over, you are given the opportunity to save your game for import into the sequel. The ending achieved in this title has a big impact on how you begin the next game.

This game is radically different from anything else in the series and many players were put off by this. Personally, I never had an issue with the new direction. Bane of the Cosmic Forge is different, yes. But it’s also a classic entry in the annals of CRPG legend. This is one classic RPG I recommend to anyone seriously interested in the genre. 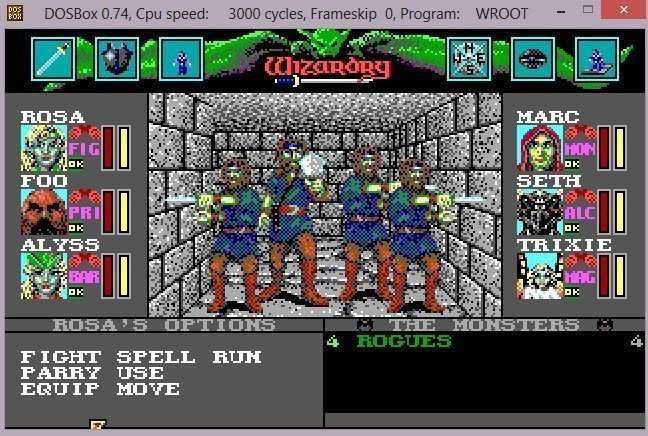 Difficulty: Medium – For this first time we have a Wizardry that is accessible to the semi-casual player. Progress within the game can be saved and loaded at will. Which makes it easy to “ignore” bad choices and party wipes.

Story: An amazingly in-depth story for those that take the time to read it. There are no cutscenes, and it’s possible to speed through all of the in-game dialogue.

Originality: There’s a lot of new ideas and style brought to the series in this title. But somehow, the developers also managed to stay true the legacy introduced in the original game.

Soundtrack: The game has no musical soundtrack but features sound effects for PCs equipped with a SoundBlaster compatible soundcard.

Fun: I enjoy this title quite a bit. I’ve never failed to have a wonderful time exploring the dungeons and the lands beyond.

Graphics: By today’s standards, the graphics leave a lot to be desired. However, they were pretty top-of-the-line in the day and age the game made its debut.

Playcontrol: For the first time in the series, the game is controlled by mouse. This provides a bit of a learning curve for modern gamers, but soon becomes second-nature.

Overall score (1-100): 90 – Bane of the Cosmic Forge is prime example of a classic PC RPG. This game begins the second age of Wizardry and it, along with the first title in the series, are on my list of games to play before you die.