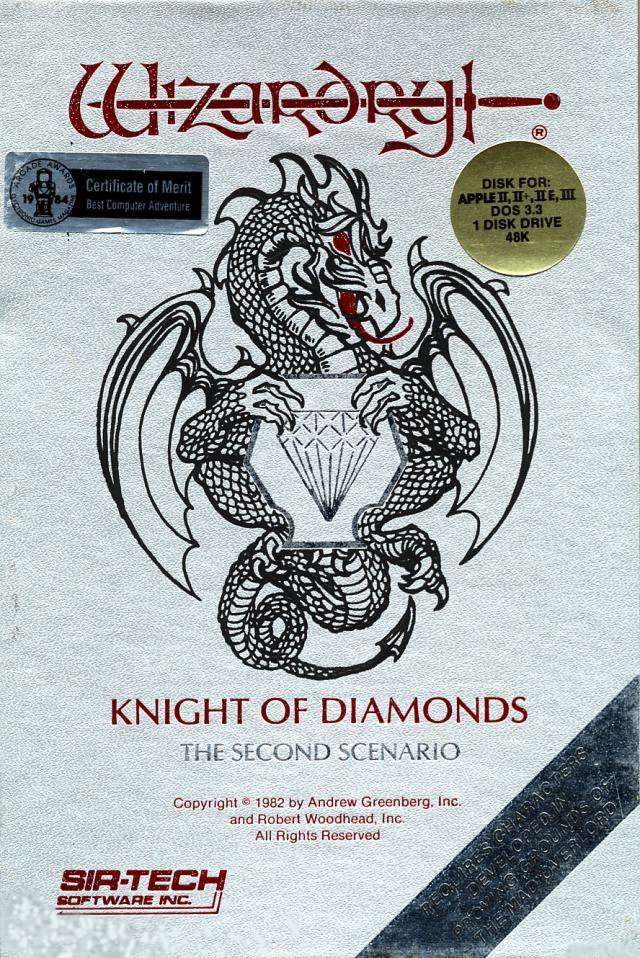 The first Wizardry scenario was such a great success that a sequel was inevitable. Thus, we have the Knight of Diamonds, the second scenario in the Wizardry series. By today’s standards, many would consider this to be more of an expansion rather than a true sequel. First of all, the PC and Apple versions require that you have a save-game file from the first game. That’s right, you play with the characters you created in the previous title. Second, aside from the storyline, level design and content, there’s nothing new in the game at all. It uses the same engine as the original title – there’s just a different maze to explore and a different reason for exploring it.

In this game, we are formally introduced to the Kingdom of Llylgamyn. A nation protected from evil by a powerful relic, the Staff of Gnilda. As long as the staff rests within the city walls, no individual with evil in their heart will be permitted to breach the city gates. The one loophole to this rule, is that anyone born within the walls of the city is immune to the staff’s power. Thus, an evil, native-born mage named Davalpus is able to seize the staff and uses its power to slaughter the royal family and take his place on the throne. Little to his knowledge, the Prince and Princess escaped his attack. The prince returns wearing the armor of the legendary hero; The Knight of Diamonds. A great battle ensues between the two and in the end all that is left is a gaping hole leading deep into the chambers underneath the royal temple. The Prince and Davalpus are nowhere to be seen. Their fate is unknown. It is at this time, that the gods speak… Offended by the blasphemy that has occurred, they decree that only way to return divine protection to the city is to return the staff back to its home in the walls of the temple. And so it is up to our heroes to explore the labyrinth beneath the kingdom, ultimately collecting the legendary armor and reclaiming the staff. 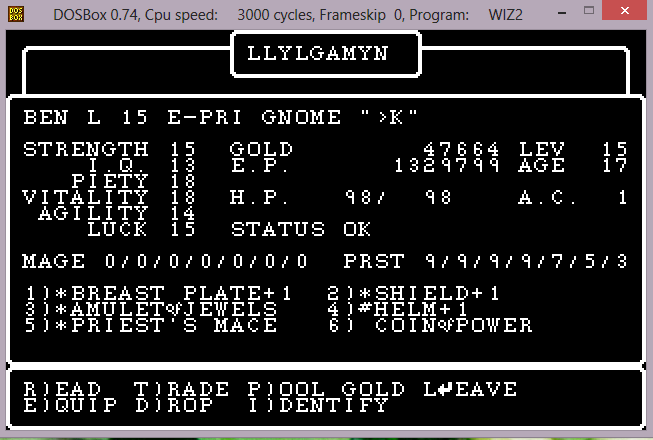 Since this game was designed to be played with characters that have already completed the first scenario, the difficulty level is on par with end of Wizardry 1. Unlike the first game, which has ten levels to explore, this game only features six dungeon levels. Upon entering the sixth floor, the game is over if you’ve managed to play your cards right. However, once you have completed the game you can return to explore, farm treasure, and take on optional bosses on that level.

Other than new monsters, mazes and challenges, there’s nothing that’s really new to see. The gameplay is identical to the first title.

It’s worthy to note that a version of the game was released for the NES. However, since there was no way to import characters between games, a new party was required. This also means the difficulty level of the game is tweaked greatly in the earlier levels for the NES version.

I enjoyed Wizardry 2 quite a bit when I was younger, and playing it again I still a lot of fun out of the title. This scenario is built on the same foundation that made the first game great, but adds a few new tricks to keep things feeling fresh. If you’re a fan of the first game, this one comes highly recommended. 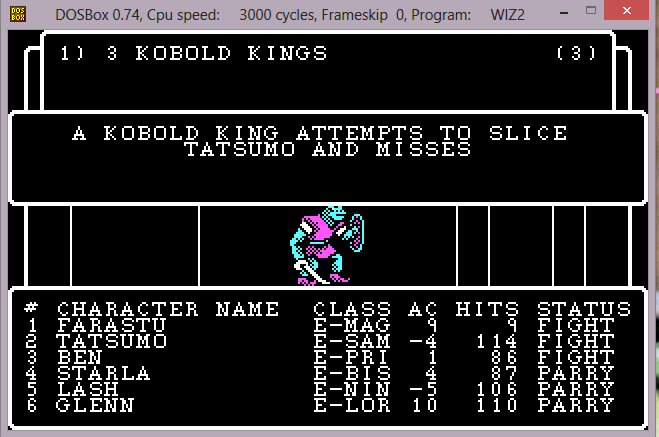 Difficulty: Hard – The game starts off and finishes being a bit more difficult than the original scenario. However, the middle part of the game tends to go a bit smoother due to the discovery of the various Knight of Diamonds equipment. These items are much more powerful than other items founds throughout the game. However, by the end of the game players are required to give them up.

Story: The storyline in this game is much more refined than in the first scenario. Which is a bit welcome. The first game offered a very basic framework, it seems much more effort was put into this chapter.

Originality: Aside from the new story and a few new monsters, there’s nothing new at all with this game. As I said, it’s marketed as a “second scenario”, so it’s better to really look at it as more of an expansion than a whole new game.

Fun: This game really only appeals to fans of the original game. The first title really carved its own niche at the time, and those who enjoy Wizardry for what it is will not be disappointed.

Graphics: The PC version’s graphics were pretty bad. Compared to the Macintosh and Apple versions of the game, the PC makes out the worst. That being said, there’s really not much that could be done at the time. This game was released during a time when PC gaming was in it’s infancy.

Overall score (1-100): 85 – This game is a great continuation to what was started with the first title. The detailed story is a welcome addition.