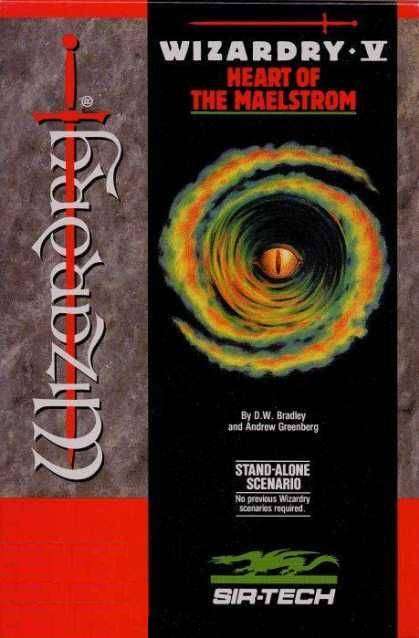 Moving right along, we are brought to the fifth scenario. Like Wizardry 1-3, you can import characters from the previous games into Wizardry V. However, this time around it is not a requirement. You do have the option to start this game with a fresh set of characters. As a result, this game was marketed as a “stand-alone scenario”.

In this title, our heroes are asked to plunge into the depths below a holy temple to seek out a rogue priestess named “The Sorn”. It seems that her foul magicks have opened a dimensional rift deep underground that threaten to consume the entire kingdom. Hopefully the heroes will be able to find her and stop her before it is too late.

In many ways Wizardry V is very much like the previous games. But in just as many, it is also very different. Gone are the days of 20×20 grid-dungeons. Yes, the maps are still grid-based in design. But, they are much larger this time around. The game now also features NPCs within the dungeon that can be interacted with (albeit, in a very rudimentary way). It is no surprise that along with these changes, came the introduction of a new main programmer for the series; D.W. Bradley. 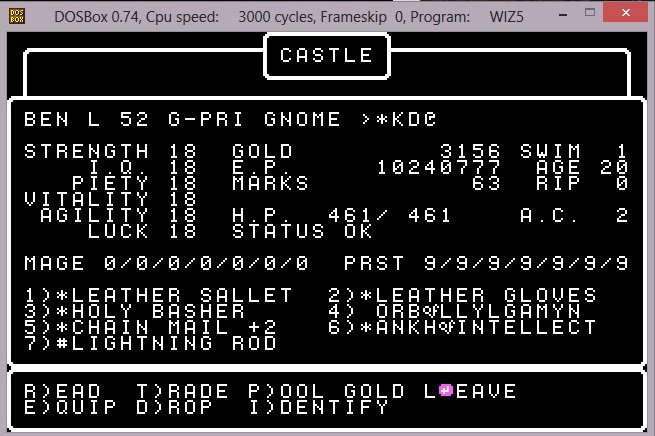 Bradley worked closely with the designers of the original games to keep the same overall tone that Wizardry fans are familiar with while also introducing a number of his own ideas.

Keeping with the flair of the “magic word” spell system found in the original games, several new spells have been added to the roster. Also, slight modifications have been made to the battle system as well. For example, Ninjas now have the ability to “Hide in the Shadows” for a chance to improve striking damage.

Graphically, the game is slightly improved from the previous entries. The new fonts and minimal use of color are certainly a welcome addition but they do seem to fall a bit short. Wizardry V was released in 1990, and by this time the original engine was starting to show it’s age.

One of the bigger selling points of this title in particular is the in-depth level of game play. With bigger dungeons, interactive NPCs, and tons and tons of riddles and puzzles, Maelstrom became the largest game the series had seen. It’s popularity even led to a great looking port for the SNES. 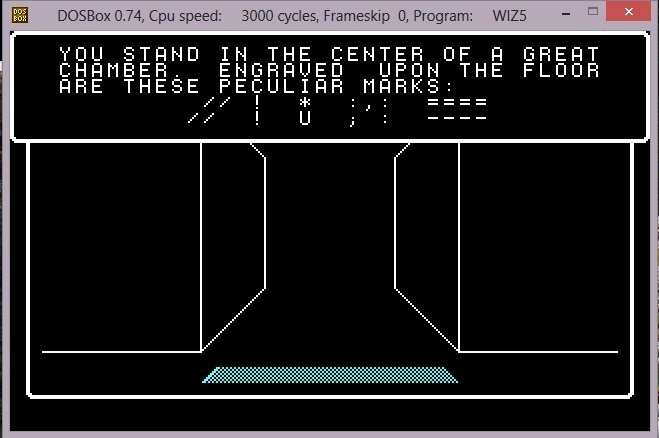 Difficulty: Hard – This title reverted back to the difficulty level of the previous titles. For the experienced Wizardry player, a large portion of the game may seem to be a bit too easy. However, the larger dungeons and “change to the rules” still manage to keep players on their toes.

Story: The story behind the game seems to be a bit weak at first. But, it does manage to progress fairly nicely as you plunge into the depths of the dungeon.

Originality: Considering the restraints of the game engine, it seems that Bradley did the best he could to add new twists and turns to the world of Wizardry. While keeping with many of the traditional elements of the series, he also managed to successfully add a new layer of gameplay that a new sense of wonder to the series.

Fun: For many gamers, Wizardry V was actually their first look into the world of Wizardry. For those players, this game offers an experience unlike any other. For veteran players, many of us were starting to tire a bit of what was becoming a rather repetitive experience. Despite this complaint, there’s still a lot of fun to be had exploring the Maelstrom.

Graphics: The graphics in this game are again, a small step up from the other scenarios. There’s a slight increase in the use of color within the game and the menus, but nothing too spectacular.

Overall score (1-100): 80 – The improvements to the engine are very much noted in the title. However, for me at least, the game still failed to capture that feeling of wonder that the original title did. That being said, the experience delivered in the title is still incredible and it takes it’s place as one of the classic RPGs for the home computer.