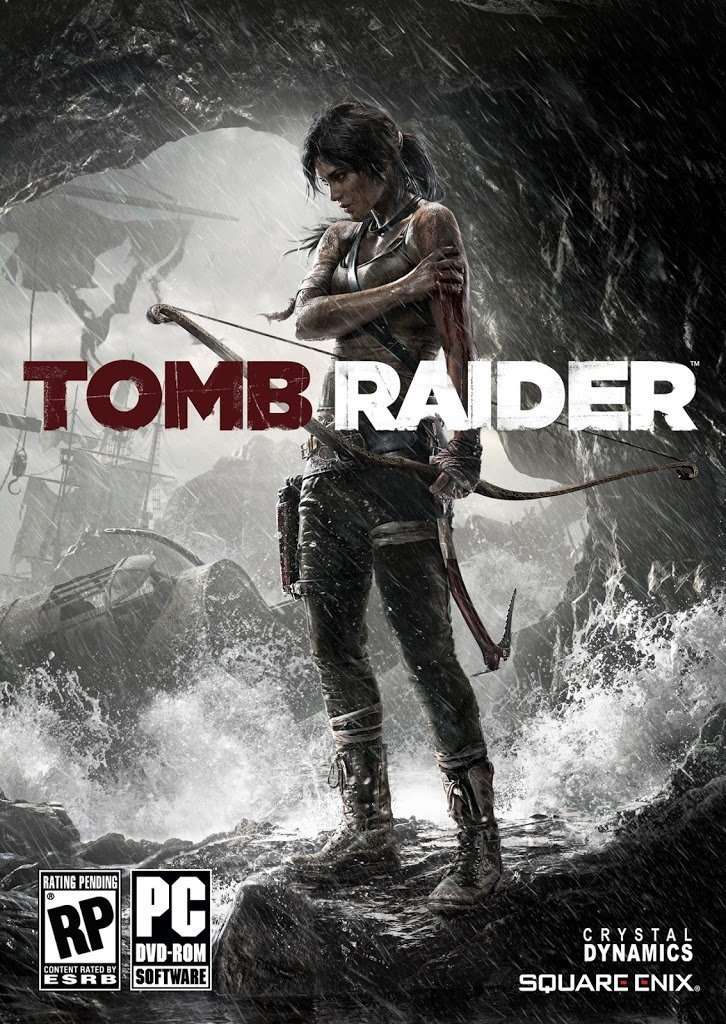 If I’ve been a little quiet lately it’s because I’ve been busy playing the recently released Tomb Raider game.  I know that traditionally I’ve focused mainly on retro games when writing on the blog. However, it is my intention to cover just about any type of game that interests me. My recent experience with Sleeping Dogs showed me just how much fun a lot of modern games can be. So, once I heard that Square Enix’s reboot of the Tomb Raider franchise was about to be released, I decided to make it my next purchase. I have not been disappointed.

I owned and played the first three classic Tomb Raider games back when I was in high school and college. I had them on the PC, and enjoyed them. But I always felt the controls were a little awkward and determined that perhaps I should have been playing them on a console to really get the best experience. So I naturally assumed that this new reboot would be the same. I decided a while back that this was going to be a game I was going to play, I just had to determine which would be the better purchase – Xbox or PS3? Then, I saw the game being advertised on Steam with a load of valuable pre-order content (multiplayer maps and an optional tomb), so I decided to take an extra look at the PC version. What I learned was quite interesting. The PC version features many graphical enhancements not present on either console system. The game engine takes advantage of modern DirectX 11 hardware in way never seen before. If you have a PC that can support it, new technologies like TressFX and Tessellation really bump up the visuals to a jaw dropping level. That coupled with the good PC experience I had on Sleeping Dogs, I ultimately went with the PC route for my purchase. 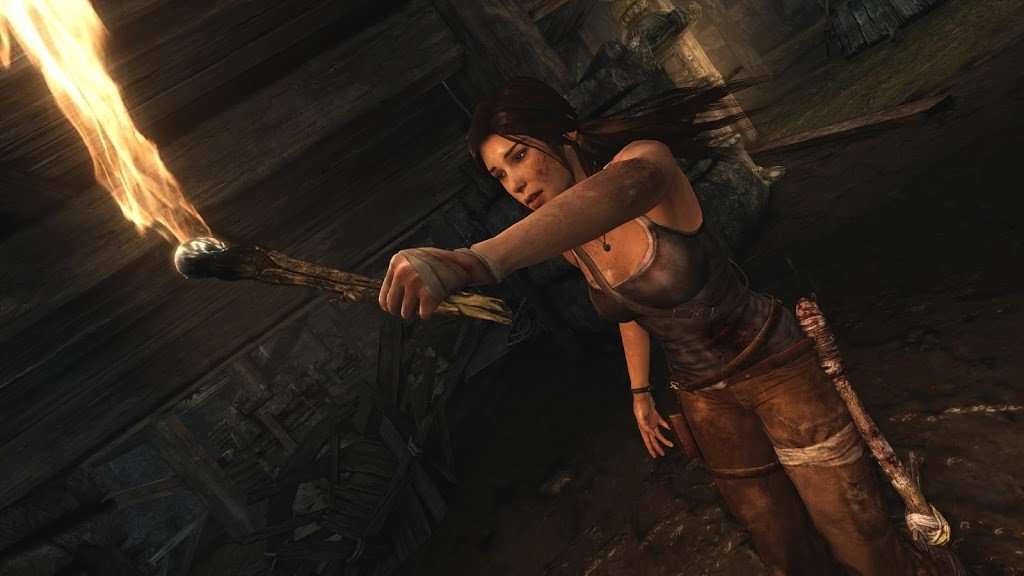 Being a reboot, this game is a complete re-imagining of the Tomb Raider mythology. Long gone are the days of Lara Croft’s H-cup boobs, and her “I can do anything attitude”. Now we are introduced to a fragile, young Lara. Who is more a victim of circumstance than a swashbuckling heroine. The opening movie does a good job of establishing who Lara is and it did a quite effective job or getting me emotionally invested in the character.

In this game, Lara is a member of a expedition/documentary film crew who is search of the long lost island of Yamatai. During the journey, their ship is wrecked in a freak storm and Lara and her companions find themselves on an uncharted island. Not long after their arrival it becomes painfully obvious that they are not alone. Lara awakes, bound and hanging upside down from the ceiling of a bone-littered cavern. This is where the game begins. From here, it’s a non-stop thrill ride while Lara tries to escape the clutches of her captors, find her friends, unravel the secrets of the island and ultimately, makes her escape.  Due to the recent release of the game, I don’t wish to spoil any plot elements so I’ll stop there.

I found myself feeling almost protective of poor Lara. The thrilling atmosphere of the game, combined with the fact that danger and death can lurk around almost any corner really kept me on the edge of my seat. The death scenes in the game are often shocking and gruesome. As I said earlier… SE did a fantastic job of making me “care” about our heroine. 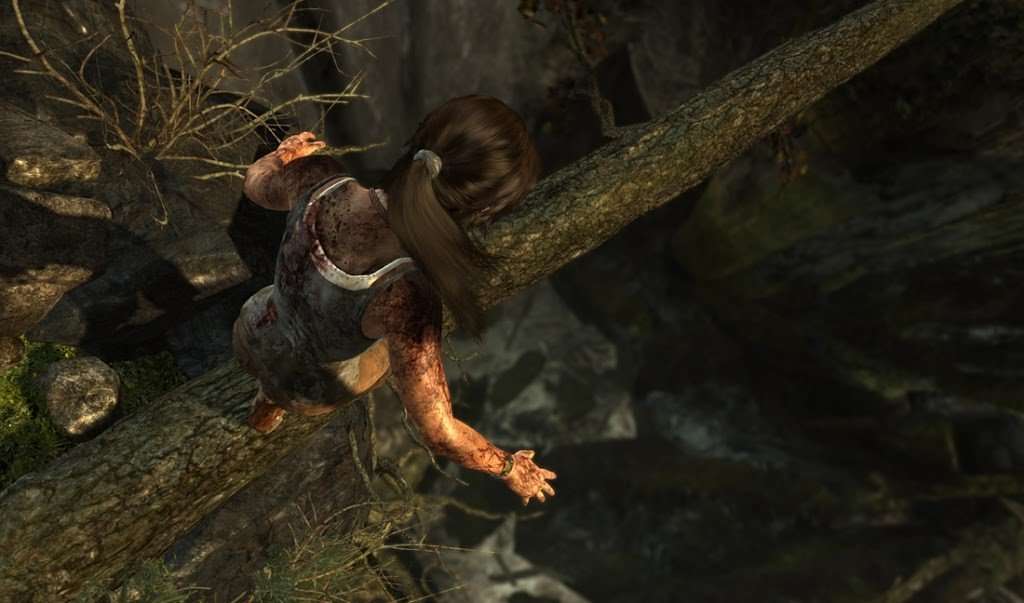 At first, the game seems to have a very “on-rails” feel to it. Many early parts of the game rely on button pressing combos to navigate through action sequences, but it’s not long before you are given complete control. Once this happens, the focus turns to exploration and survival. The island is occupied with hostiles, and Lara must either sneak her way through the environment or fight her way to safety. Throughout the game, Lara will acquire gear and weapons which can be upgraded using salvage materials scattered throughout the maps. Lara also earns experience points by hunting animals, killing opponents, or discovering lost treasures/items. Once she levels up, she can learn new skills and abilities.

True to its name, Tomb Raider also features optional tombs for the player to explore. These tombs are fairly short and feature a bit of a break from the rest of the game. Exploration of tombs often require solving various environmental puzzles to reach the large treasure cache at the end. 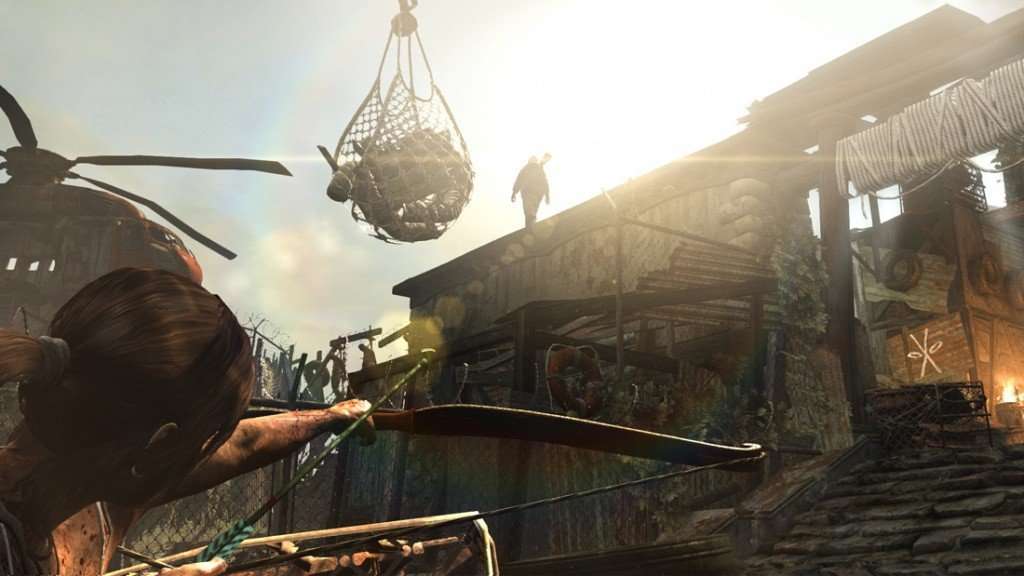 Initially at release, I had quite a time tweaking the graphical settings to get the game to run properly. I found this to be quite frustrating as I have a beast of a video card that should be more than capable of running this game even on its highest settings with all the bells and whistles. As it turns out, there were some issues with both the game code and the drivers provided by Nvidia that were causing a problem. Luckily, both SE and Nvidia released fixes to alleviate this problem and I am happy to report that things are going smooth now.

I completed the single-player game last night and I found the whole thing to be quite a good experience. I certainly felt like I got my money’s worth with it alone. But there’s also a multi-player mode available as well to add a little more value. (Something I toyed with, but did not find all that interesting). I’m sure that this title will spawn a slew of DLC in the coming months (multiplayer maps have already been released), so I look forward to checking it all out when the time comes. All in all, I certainly recommend this title to anyone. Old Tomb Raider fans may not appreciate the “New Lara”, but personally, I was beyond impressed. 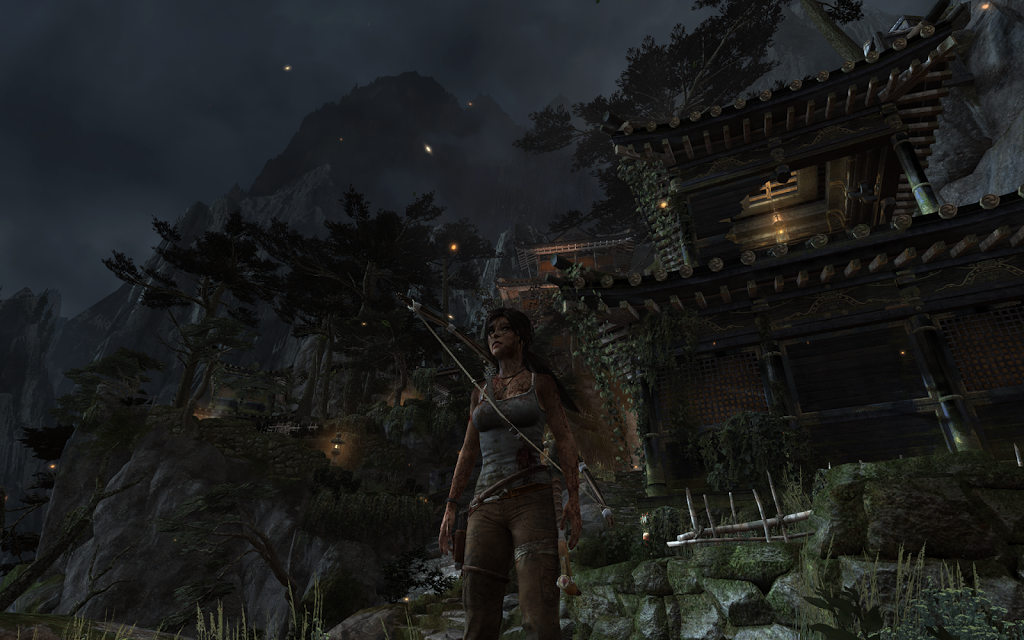 Difficulty: Variable – The game offers three difficulty settings which apply to combat only.  As usual, I played the game on the default/normal setting and found it to be a fairly easy playthrough. There were a few situations in the game that required me to make several attempts at victory, but nothing very challenging at this setting. I found most of the puzzles in the game to be fairly straightforward, only requiring some basic out of the box thinking. I’m hoping for some more challenging tombs to raid in future DLC releases.

Story: Once again Square Enix delivers a breathtaking story. This game does a fantastic job of transitioning between cinematics and gameplay. The background story for the game is actually based on real mythology and is quite fascinating. I found it to be a perfect setting for the game.

Originality: I’ve heard many in the media compare this game to Uncharted (a title I have never played), so I can’t really be sure just how fresh many of the concepts presented here actually are. To me, I found the game to be a nice departure from anything I had played before. From the platforming angle, it is very similar to the old Tomb Raider titles of yesteryear. However, the collecting and item upgrade system are something entirely new to this title.

Soundtrack: The soundtrack is mainly ambient. Often times the music serves as a warning to impending danger. Nothing really captivating, but certainly fitting and very well done for the game.

Fun: Personally, I had a blast with the title. It was a purchase I made on a whim and was not disappointed.

Graphics: Here we go. Depending on your platform and set up, the graphic quality can vary greatly. PC users with high-end systems definitely get the better deal here. The game takes advantage of some really cutting edge tech. Video cards able to handle TressFX are treated to a Lara Croft with almost photorealistic hair, for example. That doesn’t mean that PS3 and 360 users are left out in the cold… the game looks marvelous on any system.

Playcontrol: Despite playing on the PC, I made sure to pull out out my trusty wired Xbox 360 controller. The game identified it immediately and even the onscreen tutorial reflected the correct button icons. This is a game that was designed for controllers and while there is native PC keyboard support, I think the a controller is defiantly the way to go. I experienced no real issues at all with controlling the game.

Value: Being a new game this sells for a premium price of $50 or more (depending on version). There’s also plenty of optional DLC and some of it costs a pretty penny. The game itself is certainly worth the price. But knowing SE’s history, I’d be willing to bet we’ll see deep cuts in the cost of the game – or possibly even a definative edition at some point in the future.

Overall score (1-100): 85 – I think SE has delivered a great title. While some old school gamers fond of the original series will certainly gripe about the radical departure this game represents. I found it to be quite well done. I’m not usually a big fan of reboots, but in this case, Tomb Raider 2013 has really injected new life into a series that (while good in the beginning) grew more stale as the years went by.