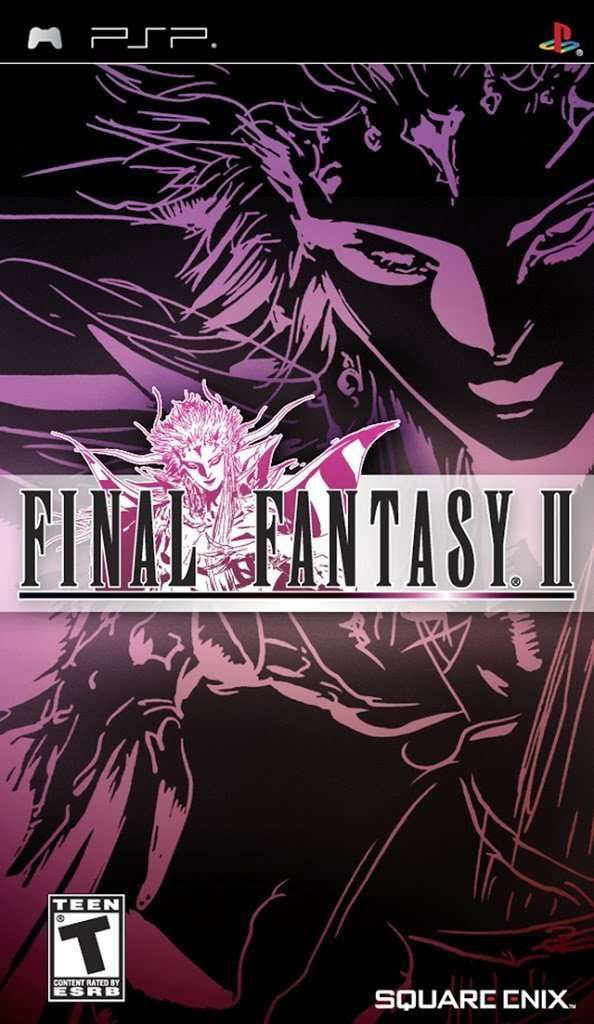 Man oh man, where to begin. Final Fantasy II is an interesting game to review. First of all, despite being the sequel to 1990’s super-popular Final Fantasy, it did not see an official release in the US until sometime around 2001 or 2002. Up until that time, all US players had were hacked, poorly-fan-translated ROMs. The first official version of Final Fantasy II released in the US was in the form of Final Fantasy Origins – a collection released for the Playstation that featured the first two games in the series. I remember how excited I was when Origins came out… In fact, it was the main reason I bought a PS2.

I had seen FF2 in its original 8-bit form during my time in Japan, but being unable to read Japanese, I knew little about the plot. All I knew is that there was a sequel to Final Fantasy that I was missing out on. Eventually, a game was released in North America bearing the title, “Final Fantasy 2″… But, I knew right from the start it was NOT the same Final Fantasy II I had seen before.

What happened was this; Nintendo of America skipped over the second and third entries in the series and renamed Final Fantasy IV to Final Fantasy 2 for introduction to the western audience. A version of the REAL Final Fantasy II was indeed in the works for US audiences. But by the time it would have been completed, Nintendo felt that fans would be turning their attention to the newly released Super Nintendo. So, the decision was made to re-brand FFIV for the SNES and hope no-one in the west would know the difference.


There have been two other versions of the game released in the US since the Origins bundle. The Dawn of Souls version for the GBA, and the Anniversary Edition for the PSP. It is important to note that the both the GBA and PSP versions have a much superior script compared to Origins. For example, the names of the characters are more accurately translated, as is the majority of the game’s text. As far as translations go, the PSP version is even better than DoS. In fact, it is considered by almost everyone to be the definitive version due to the graphical updates and the polished localization.

One difference to note is the adjustment to the difficulty level. While the PS version remains untouched from its 8-bit roots, the latter two have a reduced level of difficulty. In fact, they are cakewalk compared to the Famicom or Origins version. That being said, the introductions of the “Soul of Rebirth” scenario (from the GBA version) and additional optional content found in the PSP add a new level of challenge above that found in the main scenario.

The storyline for this game is nothing short of epic. It tells the tale of an oppressive empire that’s in conflict with a group of rebels. It focuses on four main characters for most of the game: Firion, Maria, Guy and Leon. The game begins with the four youths being attacked by knights from the evil kingdom of Palamecia. They are left for dead at the conclusion of the battle, but once the dust is settled, three of them are rescued by members of the rebellion. Leon was not discovered among them.  As the story progresses, the heroes are thrown into the ranks of the rebellion. This sets them on a path that forever changes the course of both their lives and the world at large.

In many ways, this game is a big improvement over the original Final Fantasy. To start with, the storyline in this new chapter is phenomenal. It hooks you from the beginning of the game and never lets go. Also, the music in this game is even better than the first Final Fantasy. My only real gripe with this game is the character advancement system. In this game, your characters do not have “levels”, instead characters improve in the abilities that they use the most, or the weapons they wield more often. In writing, this concept sounds amazing. But in practice, it fell a little flat. I think Square had their thinking in the right direction, but it just didn’t turn out as good as they planned. Regardless, it was a very innovative idea at the time.

Despite my griping, I enjoyed the game immensely. I mean, after all, this is the game where the lovable Chocobos were debuted! Even with a few flaws in the game mechanics, the overall experience is fantastic.

I think this game is much more approachable to players who are new to the genre. The first game can be a little unforgiving at times. Plus the storyline of FF1 can be a little tough to grasp. This game has the benefit of fantastic storytelling to help motivate players.

All in all, this is one classic RPG that should not be overlooked.

Difficulty: Medium – Much like the remake of FF1, this modern day version is quite a but easier than the original 8-bit release. That being said, the PSP version adds a new extremely challenging dungeon at the end of the game. And the Soul of Rebirth chapter that’s been added is no walk in the park either.

Story: The storyline here is much more in depth that the first entry in the series. The dialogue is engaging in a way that’s unusual for most RPGs of the era. There is a bank of special keywords that you can mention during some NPC conversations that trigger events or allow you to obtain new information. I’ve heard some claim that the storyline is, on its surface, a blatant rip off of Star Wars (rebel alliance vs. an evil empire), but I found this is not so much the case if you actually pay attention to what’s going on.

Originality: This game took everything that was good about Final Fantasy and combined it with more in-depth storyline. The character advancement system, despite its flaws, was a bold step towards a more realistic system of character progression.

Soundtrack: Another classic soundtrack. The Rebel Theme alone is a masterpiece. If you remember any one thing about this game, it’s more than likely going to be the wonderful music included.

Fun: This game for me, is a quite an enjoyable experience. Sadly, due to its belated release in the US, it has been largely ignored by the masses. I personally find the game to bring a lot of enjoyment.

Graphics: Much like the original game, the graphics of this title have been improved upon with each subsequent release. The PS1 version of the game featured sprites that were on par with the SNES games in the series. The PSP remake beings the art up another notch. There’s a lot of beauty to be found in the modern versions.

Playcontrol : This is not really an issue with this type of game.

Value: The cheapest way to play this game today is the PSP release which usually retails for around $20. Copies of other versions range in price wildly

Overall score (1-100): 95 – I am a firm supporter of this title. I think it’s an unrecognized masterpiece. Everything from the lush soundtrack to the engaging storyline is top notch in my book. This game takes everything that was great about the first Final Fantasy and makes it even better. The only negative mark I can give is a questionable character advancement system.