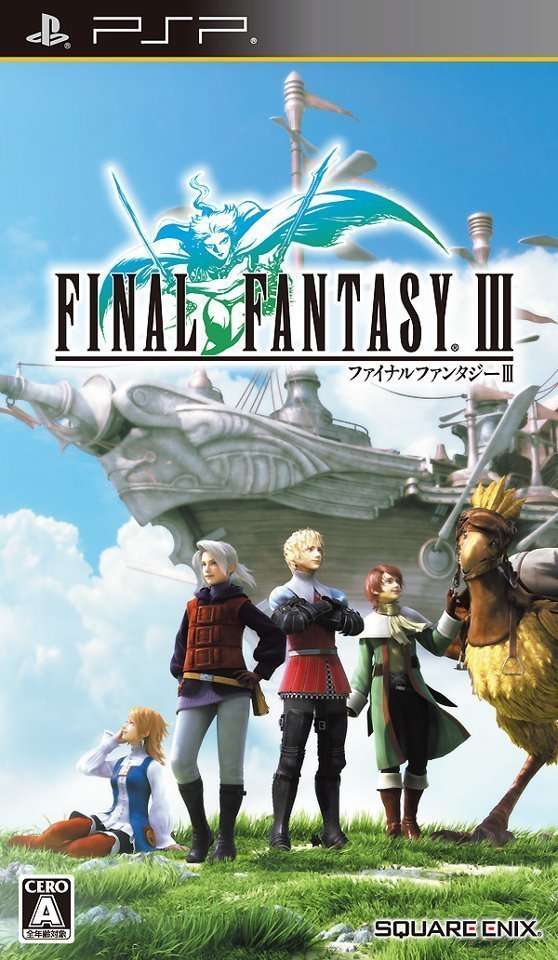 Having completed Final Fantasy II, it is time to move on the next chapter, Final Fantasy III. This is another Final Fantasy game that was originally released in Japan only. For years it seemed like North American players would never see a localized version of this title. However, after years of fan petitions, Final Fantasy III was finally made available to western audiences.

Until the US release, only unofficial hacked/translated ROMS of the 8-bit game were available. Having played the game in its bootleg form years ago, I was delighted to finally get my hands on a legitimate copy. But, it’s important to note, the US version of the game is very much a remake. The North American version features upgraded 3D graphics. It also takes some liberties when it comes to the main characters in the game as well. Originally, FFIII featured four generic, nameless characters. The re-release gives them all proper names and personalities. These characters all have backgrounds that are interwoven into the main storyline itself. This might seem like blasphemy to a purist like me, but actually it is so well done, that I feel it is truly superior to the original release. Nothing is lost in the update, but so much more is gained. The only oddity I found is the small change made to the job system by including Freelancer and hiding away the Onion Knight job (more on this later).

Initially, the North American version of Final Fantasy III was released on the Nintendo DS. However, an updated version has since been made available for iOS devices, and there’s also a downloadable version for PSP and Vita users. Since I played the DS version a few years ago, I decided to give the PSP version a go this time around. For the most part, the DS and PSP releases of the game are identical. There’s really only one big difference between the two versions of the game, and I’ll cover that in a bit.

if you’re hesitant to play either because they are technically remakes, don’t worry. The modern version of Final Fantasy III is an amazing game, regardless of what system you play it on. From the introductory movie, to the various optional content – I was hooked. As I mentioned earlier, the differences may seem pretty stark at first. But in reality, they are actually quite subtle and really improve the overall gameplay experience. In fact, the storyline behind the game is greatly enhanced with these new remakes.

The storyline begins pretty simply, an earthquake reveals a long forgotten cave on the outskirts of town. The game begins with our main hero Luneth falling into the cave. Inside, he discovers a magical crystal that speaks to him and tells him to gather his friends and return. From here, we are slowly introduced to the gameplay basics and to the other characters. After assembling the team and returning to the crystal, the game truly begins.

Unlike the previous games in the series, our characters are not really typecast into specific roles. Instead, they are able to switch between various jobs. Many of the classic Final Fantasy jobs (or classes) were established in this game. At first, your characters are jobless, or Freelancers. This changes once jobs are bestowed to the characters by the crystal. Each character can be assigned one of the jobs (or roles). This allows the player to build the party however they see fit. Want to go the traditional route and have two fighters, a healer and a magic user – no problem. Want to get a little crazy and have a party full of magic users? Go for it! The choice is yours.

At first, the jobs that are made available are pretty basic (the same found in the first Final Fantasy game). But as the game progresses, more advanced jobs are unlocked..

This is a good place to elaborate a bit on something I mentioned above. In the original release of the game, things started a bit different. Instead of beginning with just one character, all four youths were in the party from the very beginning. Instead of being assigned the “blank” class of Freelancer, they were known as Onion Knights. This original “Onion Knight” job is also available in the modern version of the game, but it has to be unlocked. The DS version, really makes you jump through hoops to unlock Onion Knight. It involves communicating with other players through the in-game mail system via the Nintendo Wi-Fi service. Which for a game that’s over five years old, can be quite a chore. Thankfully, the PSP version eliminates this nonsense and allows the job to be unlocked with a simple in-game quest.

The job system aside, the game is quite impressive. Having played both, I found the PSP version to be overall more agreeable than the DS version. The dual screen features of the DS did not bother me or detract from the gameplay in any way. But having now having played the game on a single screen, I find them to be somewhat unnecessary.

Final Fantasy III is a forgotten gem that’s actually one of the staples in the series. In fact, it’s probably one of my favorite Final Fantasy titles.  All of the classic Final Fantasy elements can be found here; various jobs, chocobos, and even Moogles make their debut in this game. It is a shame the west had to wait so long to enjoy this wonderful title.

Difficulty: Medium – While still not overly difficult, this title can be quite challenging for those player unable to wrap their heads around the job system. Many obstacles in the game can be easily overcome by thoughtful use of various jobs. You can switch on the fly for the most part, so don’t hesitate to try new things. Also, as usual in these remakes, the hardest content in the game tends to be the extra hidden bosses that have been added.

Story: The original version had quite a story, but this is only made better in the modern remake. Despite the political intrigue of Final Fantasy II, I have to say that the plot line of this game is classic JRPG fantasy at its finest. Another excellent storyline from Square Enix.

Originality: Again, this game takes all of the great aspects of the previous games and builds on it. The job system is a completely original concept that really makes this game at first of its kind. It was bold move at the time, but one that pays of big in terms of gameplay.

Soundtrack: Magical! The main theme is one of my favorite pieces of video game music. It is routinely played at the Final Fantasy concerts. Uematsu at his finest!

Fun: I absolutely love this game. The first time I played it, I had been put on bedrest due to back problems and this game made the time fly by. It’s worth every penny.

Graphics: The original Famicom version was very similar to Final Fantasy 1 in many ways. That version still remains unreleased in the US. The modern version is a different story. Our Final Fantasy III is made of rich and colorful 3D graphics. Compared to most moderns games, things are little blocky, but this is a result of the port from the DS. Despite that, it’s not at all distracting and it is a vast improvement over the original.

Playcontrol : The DS version is a little wonky to control if you actually try to use the touchscreen. But most players stick with the standard controls. Going this route or if you’re playing on the PSP, there’s no issue with playcontrol at all.

Value: Copies of the DS version can be a bit pricey, so if you want a physical copy you’ll be shelling out around $50. The PSP release is available digitall for around $20, which is a more than fair price.

Overall score (1-100): 95 – Another excellent title with a near-perfect rating. I’m trying not to be biased, I swear. If you’re at all fan of RPGS or Japanese games, there is no excuse. This is a must have.