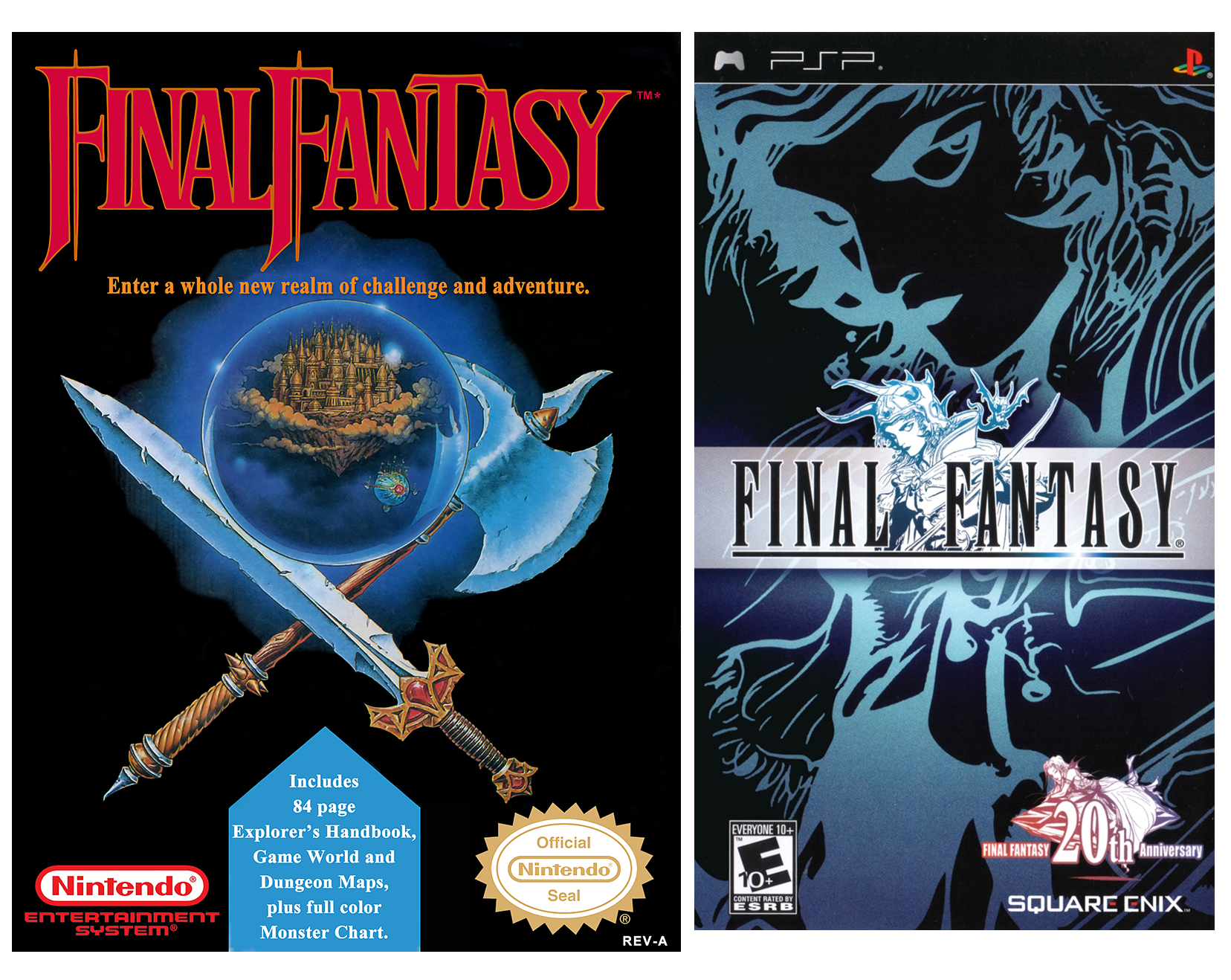 I know that recently I’ve spent a little time covering random new releases such as Sleeping Dogs and Tomb Raider, but it is still a main focus of mine to re-live my early gamer days by chronicling my favorite games of yesteryear in a semi-accurate timeline. So far on this blog, I’ve covered my gaming experience starting with my days in a coin-op arcade, then moving on to first-gen home consoles like the Atari 2600, to the godfather of them all; the NES. Sure, I’ve gone off on a few tangents like my Mega Man and Castlevania series playthroughs (in which I skipped around between various generations), but I’ve tried to keep a semi-linear timeline as the overall theme for this site. Before moving on from the NES to the Game Boy days, I would be amiss if I didn’t take the time to remember what may be one of the most legendary 8-bit RPGS of all time, Final Fantasy.

I can’t remember which game I experienced first, Final Fantasy or Wizardry. I was introduced to both of them around the same time in my life. I was living in Japan at the time Final Fantasy was released and I remember asking for it on a whim. I had never heard anything about it, and I didn’t really know what to expect, but I was not disappointed. The summer after my sixth-grade year was spent either at the beach or in my room jamming to Paula Adbul (don’t ask) and grinding away at Final Fantasy. I put that game through its paces – trying every combination of character class, exploring every nook and cranny, and leveling, leveling, leveling.

I’ve bought this game in one form or fashion many times of the years. In my current collection I have Final Fantasy 1 in the following formats:  NES, PS1, GBA, and PSP.

For this review I decided to play the most modern rendition, the PSP version. Aside from a few added dungeons, a sight modernization of the spell system, and a few extra monsters, the game is largely unchanged from the original in terms of gameplay. All of the new optional content can be found pretty much in one out-of-the-way dungeon and thus easily avoided if you’re a purist. The main reason to suggest one of the more modern versions is of course the sound and graphical upgrade. For the 20th anniversary release, Square Enix has really taken the time to make this game shine. Allow me a moment to break down the different versions of the game:

For purists, the original 8-bit version will always stand out as the original, un-modified classic.
For gamers who want original content, but updated sound and graphics, I recommend the PS version.
For people who want the best translation the most definitive version of the game I recommend the PSP version.
The GBA version falls somewhere in the middle.

This is the game that started it all. At the time it was released it was a fantasy game unlike any ever seen. The storyline is simple; Four youths awake on a beach just outside of a grand kingdom. Each one possesses a dim crystal and has no memory of who they are. Throughout the game, they learn that the world is slowly being drained of its elemental power and that their arrival has been prophesied as the ones who will restore order by bringing light to their faded crystals.

What starts off a simple tale of fantasy soon becomes quite a complicated plot involving a demon-possessed knight, a hidden conclave of sages, and a one thousand-year time loop that keeps repeating over and over and over…. Yeah, typical Japanese stuff.

The player gets to choose from four of six classes when creating their character:

Warrior, Thief, Monk, Red Mage, White Mage, and Black Mage.*  (In the original English version Warrior is known as Fighter, and Monk as Black Belt)* — These classes can later be leveled up to Knight, Ninja, Master, Red Wizard, White Wizard and Black Wizard.

Unlike the other games in the series, there are no default names provided to the characters, so players will get to name them anything they want. The biggest trick to the game is learning how to manage these four different characters in a variety of situations. You must learn the strengths and weaknesses of each party member and how to balance these out in a party situation.

To me, this game is a gem. But surprisingly, there are many that disagree and cite the title’s weaknesses compared to future games in the series. One thing most everyone agrees on, however, is the magic of the game soundtrack. Composed by Nobuo Uematsu It was pretty impressive for an 8-bit system, and the subsequent remakes have really brought a whole new level of wonder to the soundtrack with fully orchestrated music. In my opinion, Uematsu is a very talented composer. If he been born several centuries prior, perhaps he’d receive the level of praise he deserves.

This game included many things that would remain staples in the FF series as a whole. It contains jobs, characters, themes, and monsters that would reappear in later games in series.

Despite having played this game from start to finish over a dozen times in my life, I had a blast playing this title again. The new PSP exclusive dungeon and bosses were quite a refreshing challenge. This game is a true classic that has withstood the test of time.

Difficulty: Medium – The modern day version of the game is quite a bit easier that the original 8-bit release. That being said, the PSP version adds a new extremely challenging dungeon. Many people have been critical of the watered-down difficulty of the modern remakes, but honestly, I think it makes for a good starting point for players new to the series.

Story: On its surface, the game story seems simplistic, but as you progress it becomes quite deep and convoluted. In the end, I’m not even sure I understand the subtle details of the whole time-loop scenario. The story is unfolded only by talking to NPCs.

Originality: For console gaming, this was the start of something new. Yes, games party-based RPGs had been seen before on the PC with games like Ultima. But bringing this experience to the NES was something new indeed. It was culture clash of both western D&D style fantasy and the exotic Japanese anime style. The game itself combined the overhead view introduced in games like Legend of Zelda with a framed, menu-driven combat system. It was the start of a new era

Soundtrack: Fantastic, catchy tunes. Just as enjoyable on the original 8-bit hardware as they are performed by a full symphony orchestra.

Fun: For me, this game is top tier. It doesn’t seem to get old. For anyone just getting into the RPG scene, I always recommend this game as a nice introduction to the genre. All of the core elements are here in one form or another. It’s a perfect litmus test for the aspiring RPG gamer. Hours of enjoyment.

Graphics: The original release is a bit rugged in many spots, even for it’s time. But considering all the things on the screen at once, it could have been worse. Over the years, the game has been improved upon. First, by giving SNES quality graphics and then upgraded even further.

Playcontrol : This is not really an issue with this type of game.

Value: The cheapest way to play this game today is the PSP release which usually retails for around $20. Copies of other versions range in price wildly.

Overall score (1-100): 95 – To me, this is one of the all-time classic NES titles. A must have really, regardless of the system you want to play it on. Perhaps I’m biased, but Final Fantasy is one of the greatest games of all time.