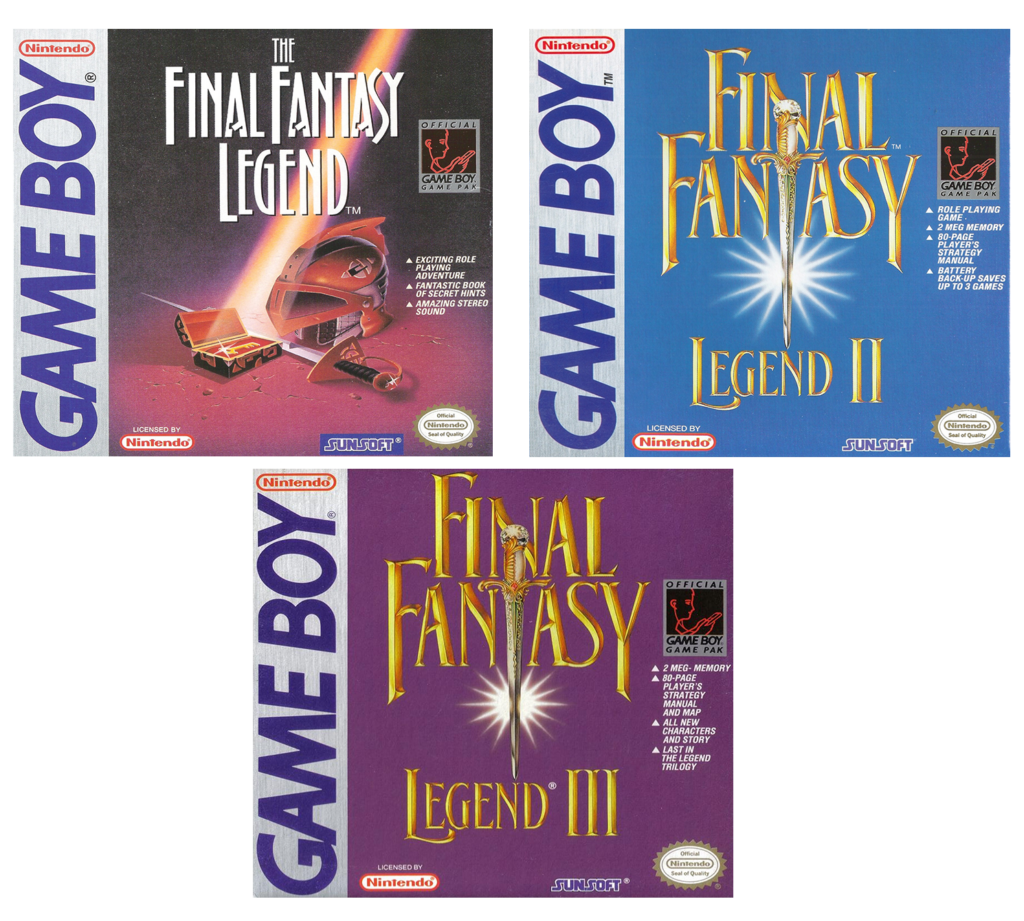 Still delving into the Game Boy classics of my youth, I’ve decided to do something a bit different. I’m going to do a combo review of the three Final Fantasy Legend games. These games, while different in many respects are similar enough in design and appeal to warrant a combined review.

First things first. These are not REALLY Final Fantasy titles. Like other games that Square published in the early nineties, they removed the original title and rebranded these games as “Final Fantasy” in hopes of selling them through brand recognition alone.  In truth, these games are actually from a series called Sa-Ga. But, it seems that Square’s plot worked. Years later, a couple other Sa-Ga titles were ported over to the US under their true name and they did not sell nearly as well.

Despite being portable titles, these games are filled with content. Make no mistake, all three of these are full length RPG titles. While each game is a little different in terms of play, there are several constants that remain. For example, in each game you can create characters that are either Human, Mutants, or Monsters. (The third game offers only the first two options at start, but later you are given the opportunity to become either a cyborg or a beast.)

The games feature an overhead design and menu-driven combat system that was common with many RPGs of the time. The look-an-feel of the UI is largely uniform across all three titles. So if you’ve played one, you’ll easily be able to pick up any other game in the series without much trouble.

The premise of the first game is the ascension of a mysterious tower said to have been created by God. Anyone able to climb the tower will reach the ultimate goal of heaven. Once the heroes manage to begin their climb, they soon realize that other floors of the tower play host to entirely different worlds. In order to advance, the characters must complete quests on a number of different worlds. The higher they climb, the deeper the mysteries surrounding the tower become.

The second game focuses on the search for the main character’s long lost father. Eventually, it is eventually revealed that dear-old-dad is a member of a secret organization charged with finding fragments of a mythical statue. The game takes our heroes through many strange worlds as they continue to collect the pieces and learn the ultimate truth…

The third game in the Sa-Ga series is the most unique. This game contains a good dose of Sci-Fi, which is a bit of a departure from the other titles. In this story, the heroes are charged with travelling through time to prevent a terrible flood that has destroyed their world. At first, they ability to time travel is somewhat limited. But throughout their quest they uncover new parts to augment their time machine so that they can eventually reach their ultimate goal.

I’ve played through these titles a number of times. At this point, I know them all like the back of my hand. If I had to rank them in order of preference, I’d do so in this order: 1, 2, and then 3. The first game is nothing short of a classic. Even as a kid I was floored with the idea of traveling all the way to Heaven to learn the long lost secrets of the divine. Only in this game, there is one hell of a twist at the end. The second entry, while excellent and with many improvements over the original, just did not measure up to the majesty that original game provided. The third is by far my least favorite. Again, it is truly an excellent game. I’m just not nearly as passionate about it as I was the other two.

When looked at as a whole, these games are nothing short of masterpieces. From everything to the epic storytelling to the fantastic soundtracks. They have a different feel than almost any other RPG I’ve ever encountered. It’s one that’s hard to describe. But take my word on it. If you like RPGs, all three of these games are must-plays.

Difficulty: Medium  –  As any old school RPG player hates to admit. If you’re patient, the games are not difficult. Each of these games is about the same in terms of difficulty and if you do encounter a tough spot, you can usually grind past it… shhh. We play these for the story, not so much the challenge.

Story: Each game is unique in terms of storyline, but each title features a well written plot. There isn’t really one scenario that comes out as a clear winner here. All three are fantastic.

Originality: The Sa-Ga series was the first real portable RPG experience. Despite the hardware limitations of the original Game Boy, these games somehow manage to pack everything one would expect into the little cartridges. Upon release, there was nothing else like it.

Soundtrack: Despite the archaic sound chip in the original Game Boy, composer Nobuo Uetmatsu worked magic. Famous for scoring most of the Final Fantasy series, he was once again provided three soundtracks of sheer awesomeness.

Fun: I love all three of these games almost equally. Each one provides hours of great entertainment. And regardless of all the modern hardware and fancy colorful RPGs of today, I find myself slapping these into the trusty Game Boy Advance and returning to them even today. Many hours of my youth were spent laying on the living room floor, exploring the worlds tucked into these little cartridges.

Graphics: Surprisingly, these games feature a lot of fine detail. While graphics on the Game Boy can often be hit or miss, the artists for these games are truly masters of their form.

Playcontrol: As expected with this type of title, there are no real issues with control or navigation.

Value:  These days, these games can be a bit hard to get ahold of. At the time this review was written, none of these three games have been made available digitally. Physical copies often fetch high prices.

Overall score (1-100): 90 –  Classic RPGs from our friends at Square, (and later distributed by SunSoft). It doesn’t matter if you play one of the title or all of them, each will provide you with a memorable experience. I can’t recommend these enough. Classic stuff.