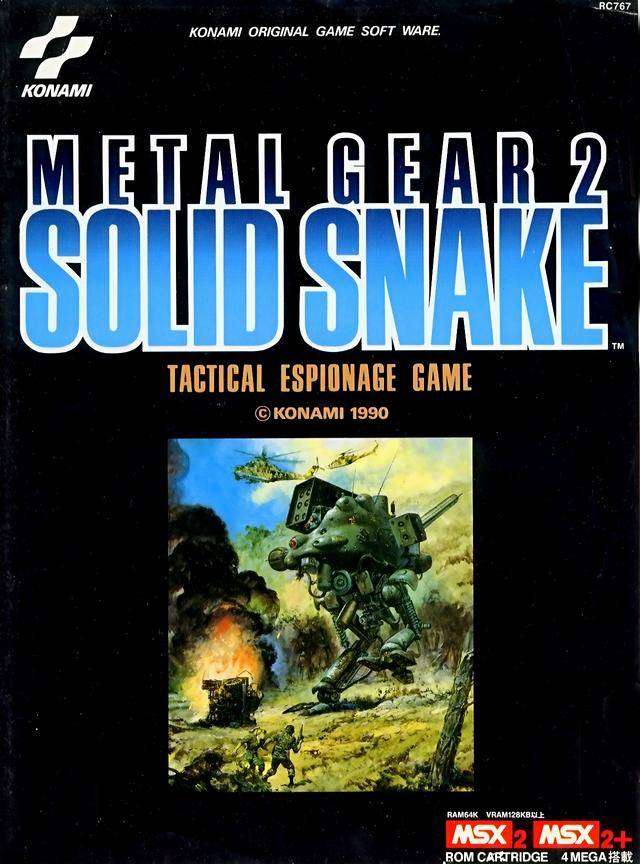 Before leaving my reviews of classic 8-bit games behind and moving on to other horizons, I figured I would take the time to check out a title that I actually never had the chance to experience. I’m talking about the ever-elusive Metal Gear 2.

Much like some of the early Final Fantasy games, US gamers had to wait a long time to play an official version of MG2. Originally released in only in Japan for the MSX computer system, MG2 was finally officially made available to North American audiences as a bonus included with certain versions of Metal Gear Solid 3.

“But wait! I played Metal Gear 2 when I was a kid!” – I can hear some of you screaming at me… Now, for many years, I also owned and played what I thought was the sequel to the first Metal Gear game. But the cold reality is: we were lied to. Due to the success of Metal Gear in the western market, Konami commissioned a sequel known as Snake’s Revenge for western audiences. However, this game was not produced with the knowledge or participation of the original Metal Gear team. In a way, Snake’s Revenge is a false sequel. While not a bad game in its own right, it certainly lacked a lot of that Metal Gear vibe. So, let’s forget all about this cheap imposter and focus on the REAL Metal Gear 2.

In Metal Gear 2, we have a game that looks and feels a lot like the original, only with a deeper story and a few new tricks up its sleeve. In this title, Solid Snake is called back into action to find a missing scientist. Intelligence reports indicate he is being held in the remote nation of Zanzibar Land, a small country led by a dangerous military junta.  As Snake penetrates his way deeper into the enemy base, it soon becomes clear that the situation is much more perilous than originally expected. It turns out the nation of Zanzibar is actually operated by none-other than Fox Hound’s old leader, Big Boss. Presumed to have been killed in the Outer Heaven incident, Big Boss managed to survive and escaped. He and many other of Fox Hound’s members founded the mercenary-run nation of Zanzibar Land where they plan to continue their antics…

The gameplay in this title is very similar to the original Metal Gear. One thing that makes this game a bit different is the new anti-personnel radar. This is a beacon of sorts that allows the player to see enemy movements on the surrounding screens. At first, I had a hard time getting the hang of it, which resulted in many detections and a rough start to the game, but after a while I got used to it and things fell into place. 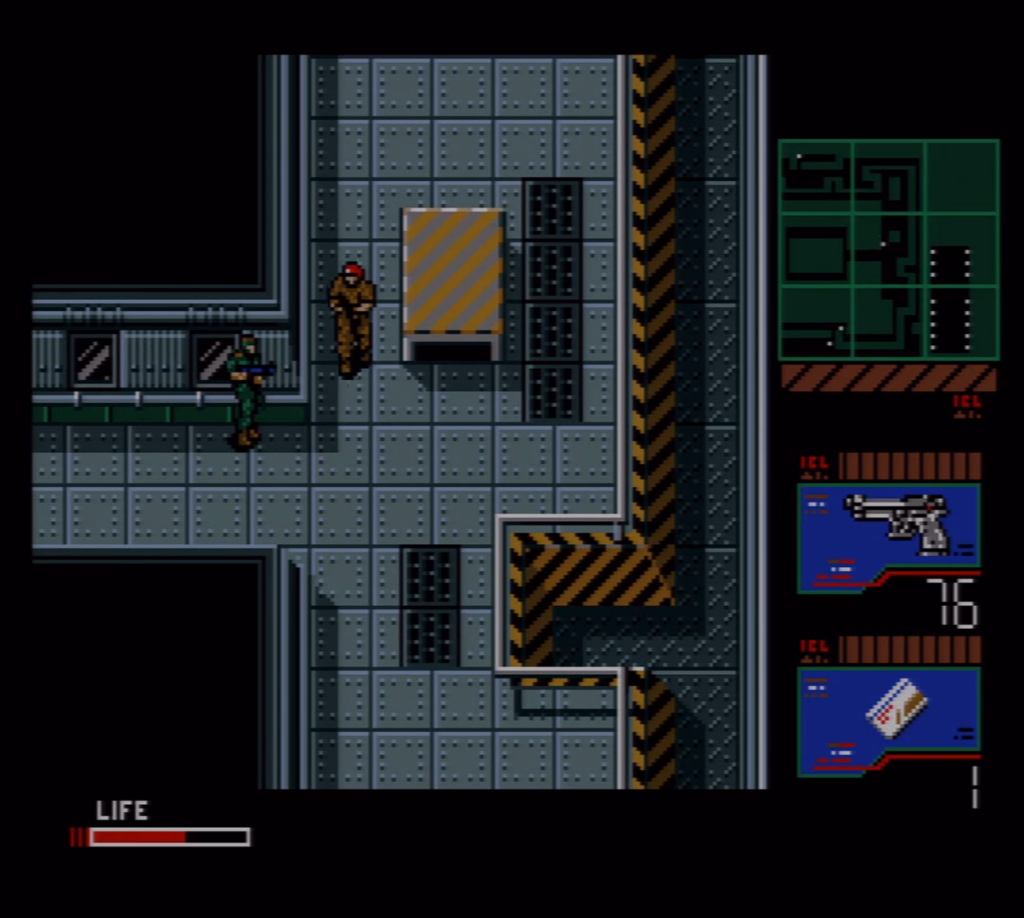 The game expands on the stealth aspect from the first title. And this time, the environment plays a bigger part. For example Snake can punch walls to distract enemies and even hide under trucks and tables to avoid detection. Coming from years of playing the original game, these new options do take a little getting used to. But once I got my mind wrapped around it, I found that I really enjoyed the new game design. It seems that the developers really tried to take the basic concepts from the original game and expanded on them wherever possible.

If you enjoyed the original Metal Gear, then this game should also be right up your alley. It’s familiar enough to jump right into, but it is also different enough to feel like something new. Again, I’m sad that it took so long for this game to see the light of day in the US. However, I’m thankful that we now have the ability to enjoy this instant classic. 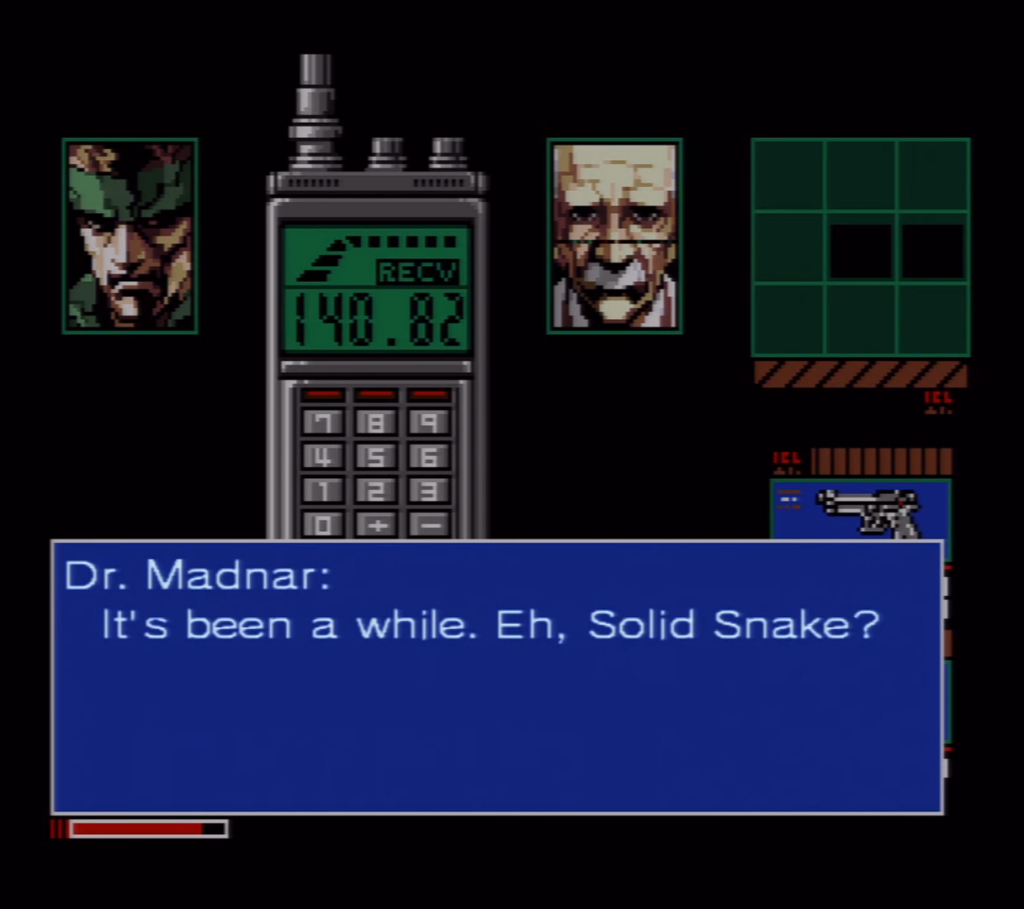 Difficulty: Medium – Like the original game, once you have mastered the art of sneaking around and you’ve managed to earn a little gear and health, the game is not overly difficult. However, until you reach that point things can be pretty tough.

Story: Right from the start, the storyline is an improvement over the original. This game features more two-sided conversations than the original. Plus, the background story of the game is much richer in detail than the first Metal Gear.

Originality: This game takes all of the stealth tactics from the first game and adds a new level of depth. It’s familiar, yet new at the same time.

Soundtrack: At first the soundtrack did not impress me at all. I found it to be dull and uninspiring. Oddly enough, as the game progresses it did grow on me a bit. But there’s still nothing worthy of mention here. One of the tunes sounds oddly reminiscent of the Rambo theme, in my opinion.

Fun: For the first quarter of the game, I found myself frustrated by the mechanics of the game. I guess I was expecting things to work exactly as they did in Metal Gear. They do not. Once I learned the new system and got the hang of things, I found myself enjoying the game much more.

Graphics: The graphics are very similar to the first Metal Gear for MSX. Appropriate for the title at the time. Not bad or specifically spectacular.

Playcontrol: As far as response goes, there’s no issues at all. Sneaking around takes bit getting used to, but the game handles well.

Value:  The best way to get your hands on this game is through the Metal Gear Solid HD Collection. This game is available for around $30-$40 on average.

Overall score (1-100): 75 – I found this game to be slightly less enjoyable that the original. But, honestly, this is probably due to my own expectations for the game. That being said, I did enjoy it. More than I thought I would. I think my love for the original Metal Gear just overshadowed this title by a small margin.