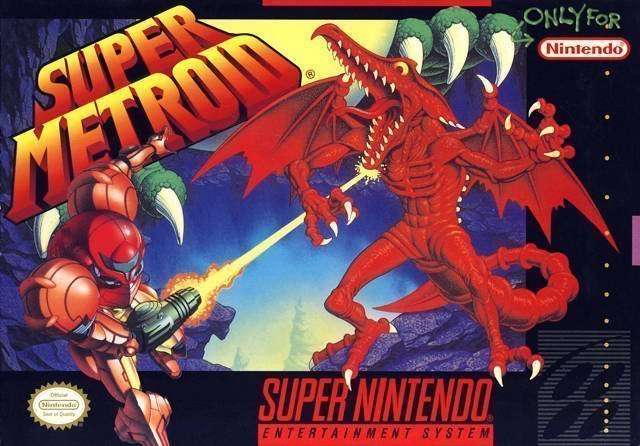 Next up, we have the infamous Super Metroid. This is a game that I actually never managed to acquire back in the day. Instead, I had a friend that left it at my house for about year. (LOL.) So yes, I did play it. But I did not own a copy until its virtual console release on the Wii. Recently, it was released again on the Wii U virtual console where it drew quite a bit of attention due to comments posted by younger players on Miiverse. It seems that these poor kids were lost without all of the on-screen tutorials that are so common in today’s games. The Miiverse service was their go-to place to hints and tips.

This game is Metroid done right! Bigger mazes, more items, badder monsters, and… a map!  Everything good about the first two games was improved upon here. The only exception to that might be the music. While not a bad as Metroid II‘s soundtrack, Super Metroid’s score doesn’t fare much better. Nothing beats the original game as far as music goes, I guess.

This title picks up pretty much where Metroid II leaves off. Samus takes the hatching to a science lab and leaves it in the care of some scientists. Not long after she leaves, a distress call comes through, Space Pirates have attacked! By the time Samus can doubleback, the lab is in ruins. The last thing she sees is Ridley snatching up the hatching and flying off! Samus pursues Ridley back to the planet Zebes – this is where the game itself begins. 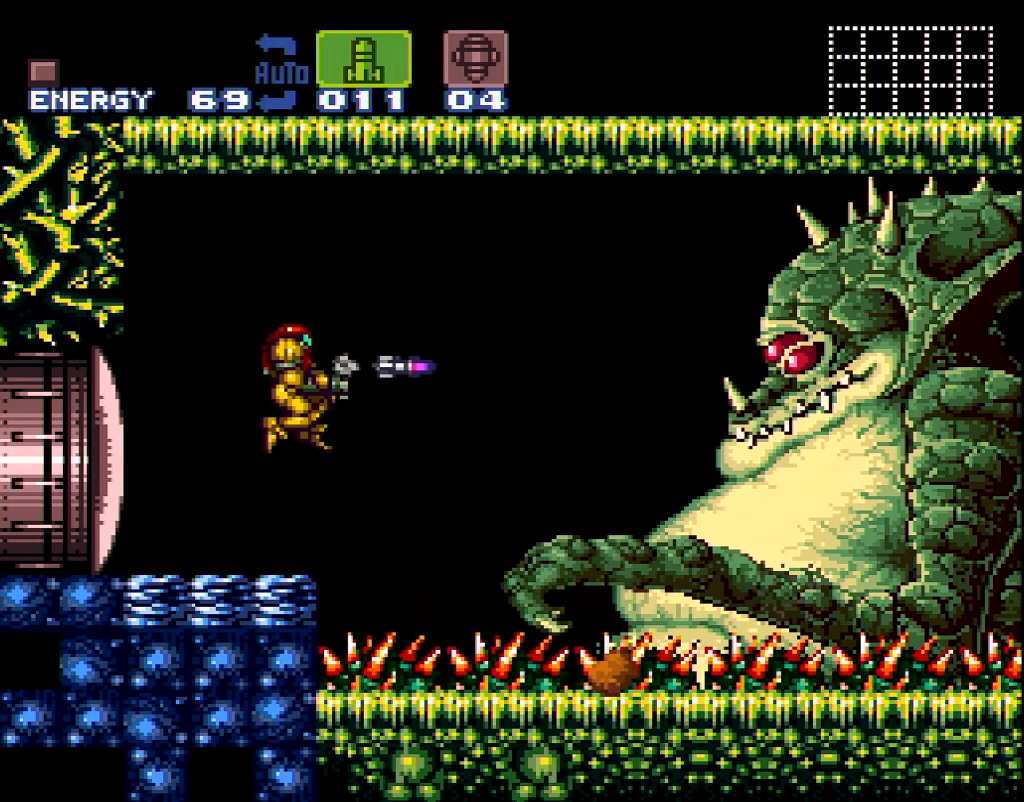 Super Metroid plays very much like its predecessors. All of the classic gameplay elements are there; hunt items, finds bosses, unlock new areas. The biggest difference this time around is improved level design and the delightful graphical prowess of the SNES. In fact, one of the fun parts of this game is being able to go back and see places from the original Metroid. Only this time, they are redone with more detail and better graphics.

But eye-candy aside, nearly every element of the classic “Metroid” gameplay is improved with this title. I mentioned level design earlier, but even things like enemy placement and the overall challenge are vastly improved. 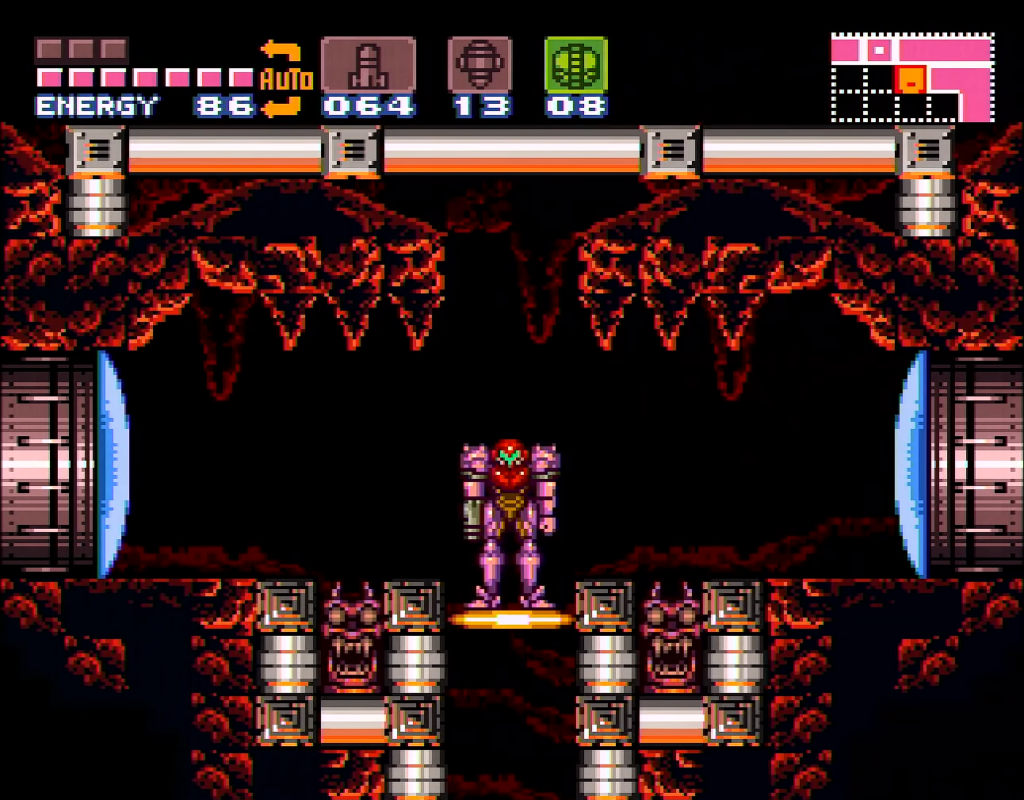 Even the storyline for this game is leagues better than the first two Metroid titles. I’ve recently decided against posting too many spoilers in my reviews,  but I will say this this; the hatchling makes a dramatic return at the end of this game. The final battle had my son on the edge of his seat. Just when it seems that Samus is unable to overcome the ultimate challenge, the hatchling appears and comes to her rescue. My son was bouncing with excitement at the way the whole thing played out. Bravo Nintendo!

Back to my earlier comments about the Miiverse buzz, despite lots of initial griping by younger players, the majority of them really gave the game positive reviews. The Super Metroid/Miiverse phenomenon has, in many ways, opened my eyes into something the Wii U has done right. It’s given single player games a level of online interaction that’s accessible right from the console. This is something that I never knew was needed, but I really think this has the potential to breathe new life into retro games. We’ll see if Nintendo is brave enough to let the community grow.

In the end, this is a classic title that provides the ultimate Metroid experience. This is one of those games that I recommend to nearly everyone. 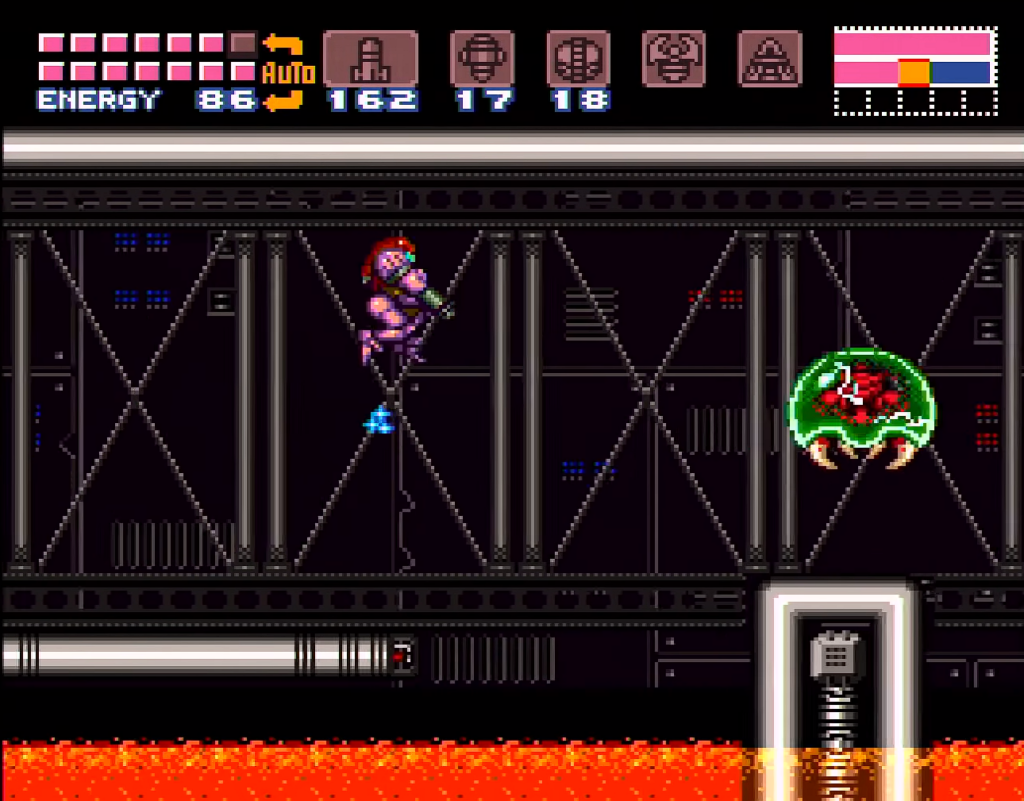 Difficulty: Medium  –  This game has a few really tough spots when it comes to boss fights. But most of these are easily learnable. The environment is not too challenging, but it can be frustrating at times for younger players.

Story: Again, we have a bit of storytelling at the beginning and end of the game. Most of the game’s plot is unfolded as you play by situational things. It’s not spoonfed to the player.

Originality: More of the same really. This game takes the ideas and concepts of the original Metroid and makes them…. super. Super Metroid really seems to be the definitive Metroid title so far.

Soundtrack: Again, weird stuff here. But I think this is what they were going for.

Fun: Super Metroid is super fun if you ask me. I always have a ball playing through the game. The graphics add a lot of atmosphere. Plus, seeing a lot of the original locations and slightly re-imagined bosses make the game a fun nostalgia trip.

Graphics: This is one of the shining points for the game. The alien environments really shine through on the Super Nintendo. The bosses and monsters are more detailed. Everything loos superb.

Playcontrol: No complaints. Flawless and responsive. Feels a little awkward if playing on the Wii U gamepad, but you get over it pretty quick.

Value:  This game is available on the Wii U Virtual Console for around $10.00. This is very much a no-brainer price.

Overall score (1-100): 95 –  Excellent first party title from Nintendo. If unlockable platformers are your cup of tea, this is the game for you. This is the game that set the bar for such titles.

Available today on: Switch Online – (Updated as of Spring 2022)