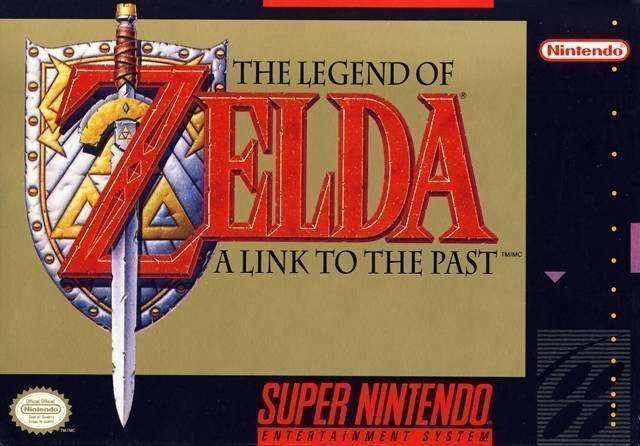 I have spent the last week continuing my retro playthrough with two excellent Zelda titles. This first review is for the SNES classic, A Link to the Past. This was the game that finally brought the story of Zelda and Link to the 16-bit era. But not without ruffling a few feathers and causing some mass confusion among fans.

In this game, we again play as the heroic youth Link on his journey to uncover the secrets of Hyrule and rescue the captive Princess Zelda… but it quickly becomes apparent that the storyline presented to the player does not quite match that of the first two games. With no explanation, players soon realized they were enjoying a prequel of sorts, but one starring a different “Link”. This led to mass confusion and debate among Nintendo fans that raged on for years. It was nearly two decades until Nintendo finally explained the mysterious timeline of the Zelda series. But that is another post for another time. 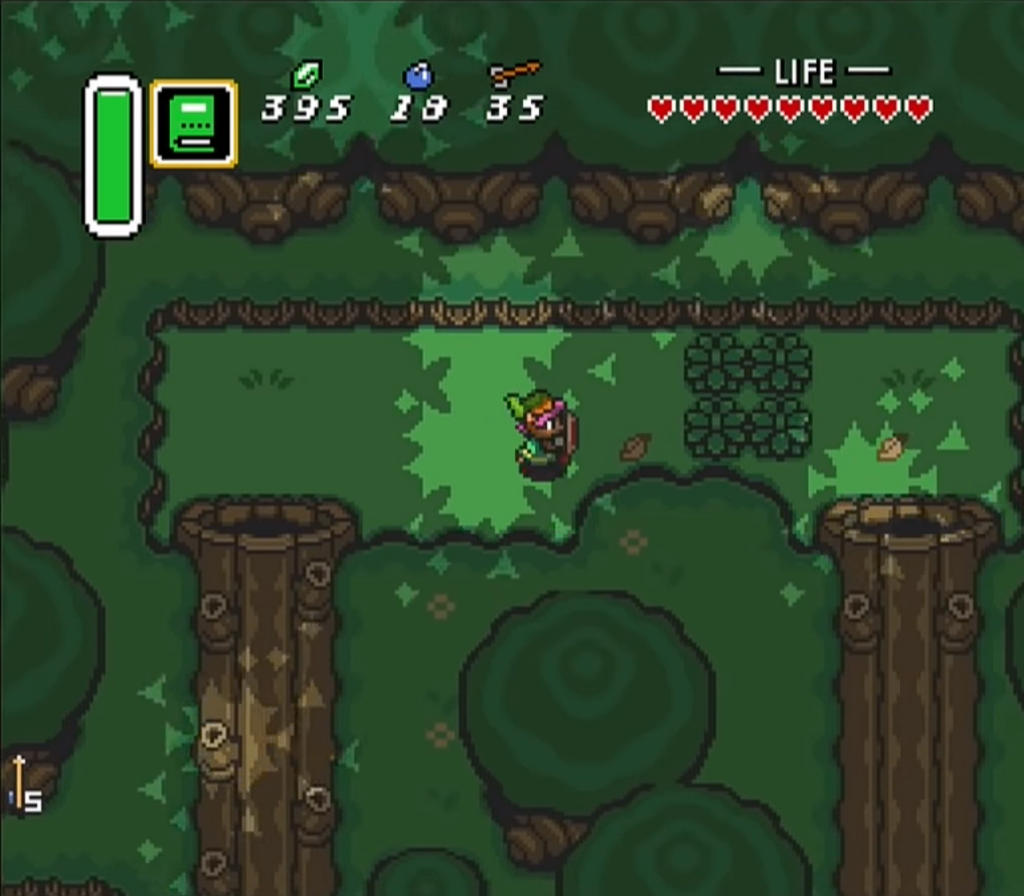 In a Link to Past, Nintendo took a step back from the side-scrolling experiment that was Zelda II, and we are once again given a great top-down adventure game. The mechanics are very similar to that of the original Legend of Zelda, but the game itself offers a much richer environment and storyline.

In this game players are able to explore the Kingdom of Hyrule in two separate dimensions, Light World and Dark World. And they are often required to switch between the two realms to solve puzzles and overcome obstacles. Link’s ultimate goal in this game is to rescue seven sages whose combined power will allow him to invade Ganon’s tower and rescue the princess.

Much like the other games in the series, Link must explore and uncover hidden treasures and powerups that will assist him on his journey. As mentioned earlier, the ability to switch to the Dark World adds a whole new dimension of exploration and gameplay not seen in Zelda games so far, but one that becomes a staple of the series. 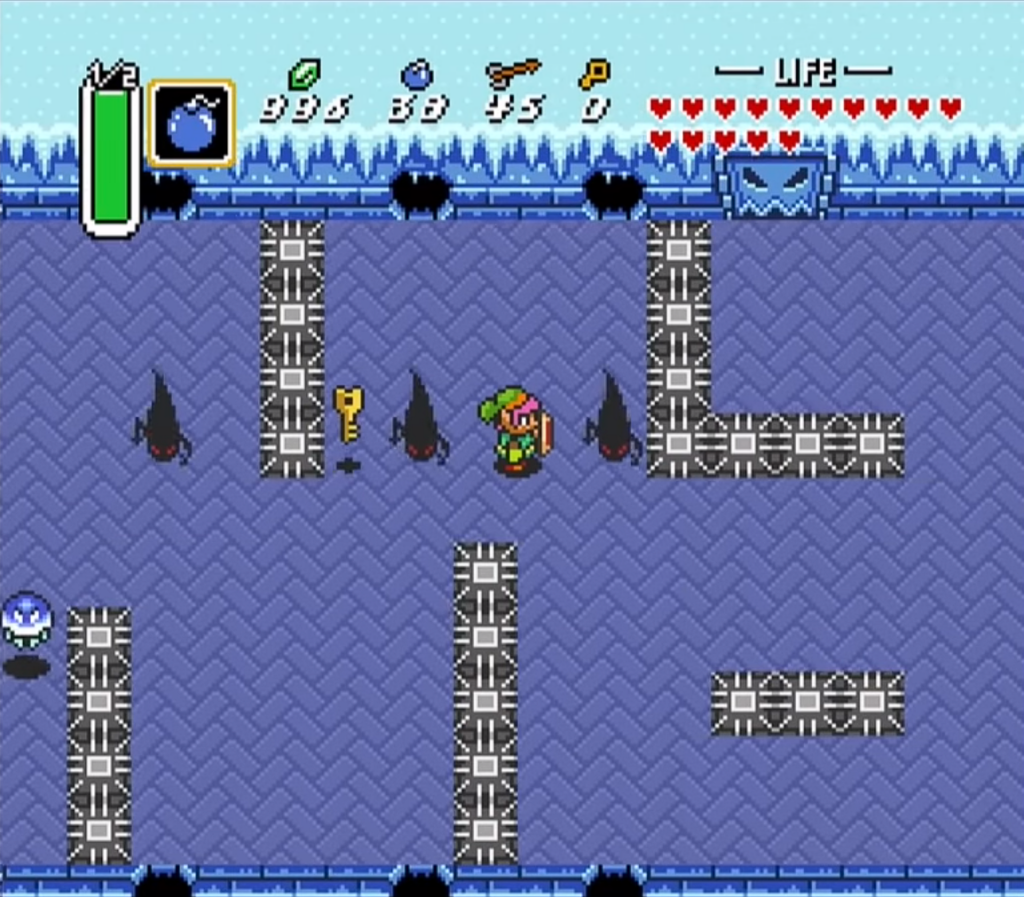 This is one of those classic games that sucks you in and won’t let you quit until you’ve explored every nook and cranny. It is a high point for the Zelda series and a timeless classic. Even if you’ve never taken the time to play a Zelda title, this game is very approachable. In fact, for many players, I even recommend this this one as a starting point.

Everything that a player could want from the Zelda series can be found here and it’s presented perfectly. If you only play one retro Zelda title, this should be the game you reach for. 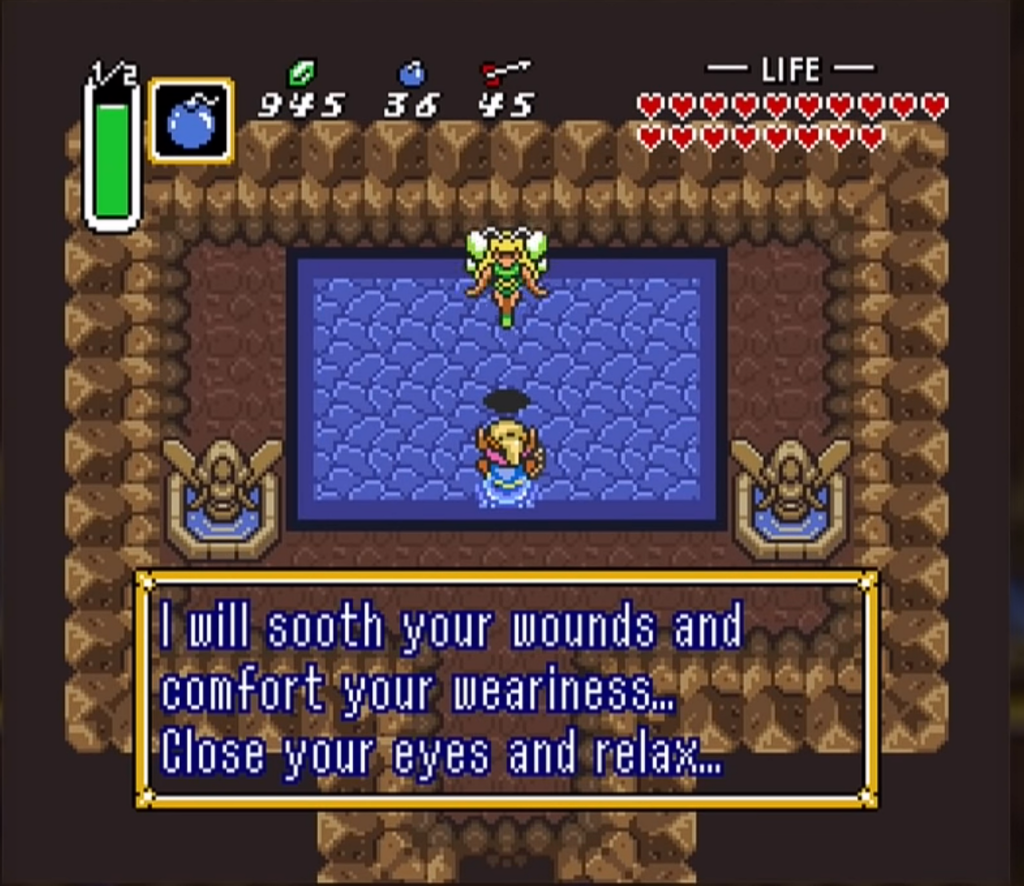 Difficulty: Medium  –  The difficulty of this title seems to be quite balanced. While still a little tougher than many of today’s games, it’s not very frustrating and fairly easy to complete for most gamers

Story: The self-contained story is very well done especially for this type of game. Lore-hungry players will find a lot to keep them satisfied in this title. As far as connecting the events of this game with the previous Zelda titles, that’s where things get a little tricky. This game is a prequel to Zelda and Zelda II, but actually features a different “Link” than the hero of the original games. While very confusing, this mystery does become a little clearer as the series progresses.

Originality: While keeping many aspects of the original game, there’s a lot of new concepts and ideas presented in A Link to the Past. The Dark and Light world makes for a really interesting experience, and was something unheard of at the time.

Soundtrack: Excellent stuff here. The soundtrack is one of the stand out features of the game. Several new pieces are included along with classic theme song. 16-bit sound at it’s finest.

Graphics: The artwork for this game is colorful and somewhat cartoonish, but it suits the game well. This game is another example of Nintendo doing what they do best; creating beautiful visual worlds.

Playcontrol: Excellent play control. Overhead titles like this don’t usually suffer in this area. Everything feels natural and the controls are precise and spot-on.

Value:   This game is available on the Wii U Virtual Console for around $10.00. This is very much a no-brainer price. To be honest, it’s easily worth four times that.

Overall score (1-100): 100 –  This is one of the greatest games in the Zelda series and one of the best action fantasy games of all time. Plainly stated, it’s of those Super Nintendo titles that should not be missed.

Available today on: Switch Online  – (Updated as of Spring 2022)