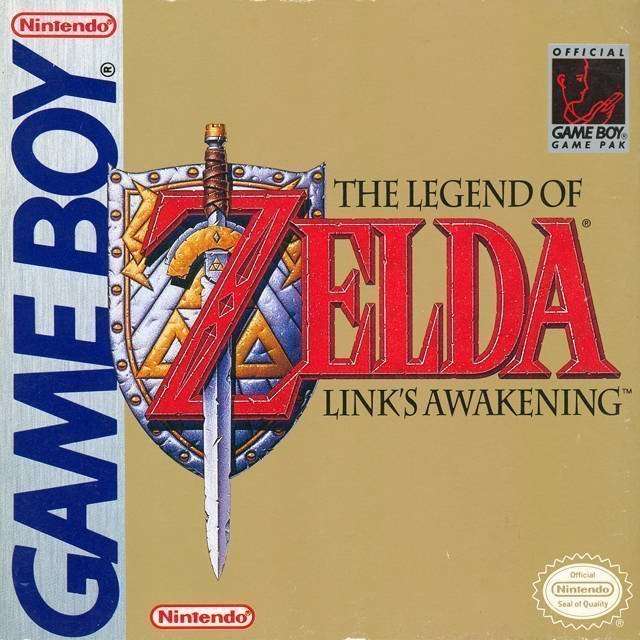 Next up we have the first portable Zelda title, Link’s Awakening. Originally released on the Game Boy and then re-released (with improved graphics) for the Game Boy Color, this is a game that I spent a lot of time with when I was younger.

For this title, we play another version of Link as he explores the mysterious island of Koholint. This makes the game unique as it is the first Zelda game to take place outside of the Kingdom of Hyrule.  In many ways, this game looks and plays very similarly to a Link to the Past, but also introduces several unique features. One of the most obvious changes is Link’s ability to jump. This is something that is a first for an overhead Zelda game.

From a gameplay standpoint, this title should be more or less familiar to any longtime Zelda fan. All of the classic action/puzzle elements are present. Everything is just scaled down to fit the limitations of the Game Boy.

So naturally, one of the biggest drawbacks of this game is the graphics. In many ways, the game features excellent art for a classic Game Boy game, but many players felt that the screen was too “busy” and lacked fine details and definition, which cause the game to suffer as a result. Thankfully, a re-release was made many years later that fixes many of these complaints. This new version, Link’s Awakening DX provides full color support for Game Boy Color users. The use of color made obstacles and environmental details much clearer.

Aside from just adding color support, another feature of the DX version is an entirely new dungeon that does not appear in the original game. This dungeon takes advantage of the GBC’s new color feature to present the player with color-based puzzles. For this reason, the DX version is universally considered the be the definitive edition of Link’s Awakening.

Link’s Awakening is a weird little game. In many ways it doesn’t really feel like a Zelda title. That being said, nearly every staple of the series is present. I think the issue is mainly due to the introduction of new monsters and the foreign-style environment.

Transitioning a series as legendary as Zelda to a handheld platform is certainly not without its challenges, and I’m sure most of the oddities and issues with this game are nothing more than a result of that shift. Still, despite its quirks, Link’s Awakening is a solid game that provides hours of entertainment.

Difficulty: Medium  –  Another very well balanced Zelda title. The game is very playable by most even if it does feature some pretty tough dungeons at some point. The key here is patience and repetition.

Story: Surprisingly, this title features a very in-depth story, even if it is mostly isolated from the rest of series. The introduction of a new locale and new characters and creatures make for a really good time. There’s a cute little twist at the end of the game that I’ve never really been sure if I liked or not. You’ll see what I mean if you complete this title.

Originality: I think the goal of this game was to create a portable Link to the Past experience. And in many ways, this is exactly what Link’s Awakening is. But there’s enough new and original ideas present to let this title shine all on its own.

Soundtrack: The music composed for this game is nothing short of wonderful. One of my favorite memories from this game is the ever popular Ballad of the Wind Fish. Classic chiptunes.

Fun: What’s not to love? Portable Zelda and it’s done right. Great fun to be found in this title.

Graphics: As I mentioned in the main review, the original version suffered a bit. The artists filled the screen with lots to see, and the pixel art is not bad per se, but in a black and white environment, things got really confusing at times. The DX version of the game was a much needed improvement and is the only way to go if playing the game on modern hardware.

Playcontrol: Overall no complaints. The controls are very precise and accurate. However, playing with only two buttons get’s a little annoying with all the menu switching.

Value:  This game is available on the 3DS eShop for only $6.00. A great price for a game with this much content.

Overall score (1-100): 90 –  Even with all its quirks, this is a fantastic Zelda game and a must-have for any fans of the series. Link’s Awakening is classic Nintendo and one of those titles that every Game Boy owner should have.

Available today on:  Currently Unavailable – (Updated as of Spring 2022)