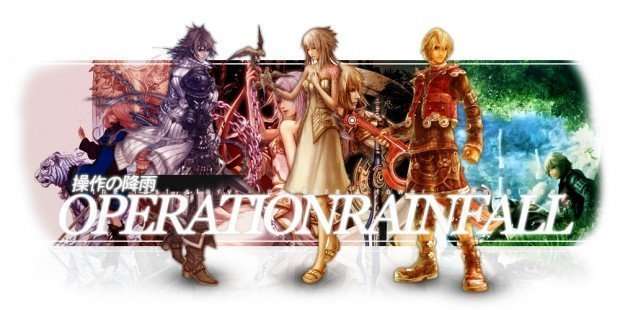 Now that I have played and completed all three games involved in the original Operation Rainfall. I’m left wondering what new Japanese Style RPG should be next on my list? Those of you that think Op Rainfall has closed up shop now that their original goal has been met, you are mistaken. Aside from a victorious ending, the campaign also served as a reminder that many great games never see the light of day in the US.

If we had something like Operation Rainfall years ago, we may not have had to wait over ten years to get a North American release of Final Fantasy II, III and V. We’d have official English versions of games like Mother 3. The Sa-Ga series would be complete. So would the Mana series. There’s a slew of great games out there that many players simply don’t even know exist. (Wizardry is another fine example.)

For more information of current projects at Operation Rainfall, please bookmark the link below:

The games involved in Op Rainfall represent a genre that’s dear to my heart. Japanese Style RPGs. So what will be next for me? While not an Op Rainfall title, the next modern JRPG that I’m planning to sit down with will be Ni No Kuni: Wrath of the White Witch. It may take some time for me to start this, and there’s a lot of great games coming out in the near future, as well and a backlog of classic titles that I still want to review. So stay tuned.