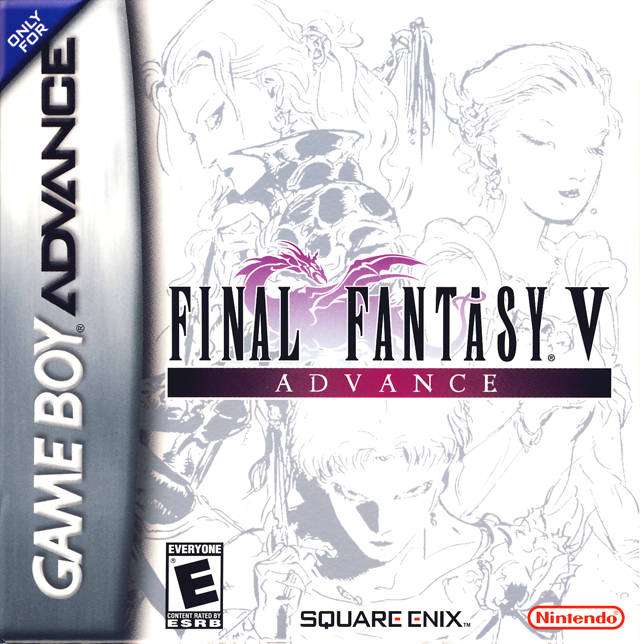 Onward with the 16-bit Final Fantasy playthrough, we have one of the more obscure entries in the early series, Final Fantasy V. Again, this is another title that was not available in the US upon its original release. Released in 1992, North American players did not get a taste of the game until 1999 when the title was bundled together with Final Fantasy VI for a Playstation compilation called the Final Fantasy Anthology. This collection was my first taste of the game.

Sadly, I can’t claim it was a very enjoyable experience. I never owned an original Playstation. My first Sony system was the Playstation 2. Final Fantasy V and the PS2 didn’t get along very well. There was a terrible graphical corruption bug that would rear its ugly head 90% of the time you tried to save or load your game in FFV. This only occurred on the PS2. Determined not to let that hold me back, I eventually memorized the layout of the save screen and was able to navigate the corrupted menus blindly.

Luckily, this issue was eliminated with a later release for the Game Boy Advance. For the sake of this playthrough (and my sanity), I used the GBA version. Like many of the other re-releases in the series, the remake contains some content not found in the original game. Aside from a much improved translation, the GBA version also includes four new jobs (more on this later) and as usual, an optional dungeon.

Before continuing, I will note that while I consider the GBA remake to be the definitive version of the game, there is actually a newer version of FFV released on iOS. Personally, I don’t consider iPhones or iPads to be viable gaming devices. I play and enjoy iOS games, but I feel like playing something like Final Fantasy on a touch-screen is far from ideal. That being said, the iOS version features improved graphics. There has also been talk of a 3DS version, but at the time of this writing, nothing has materialized. 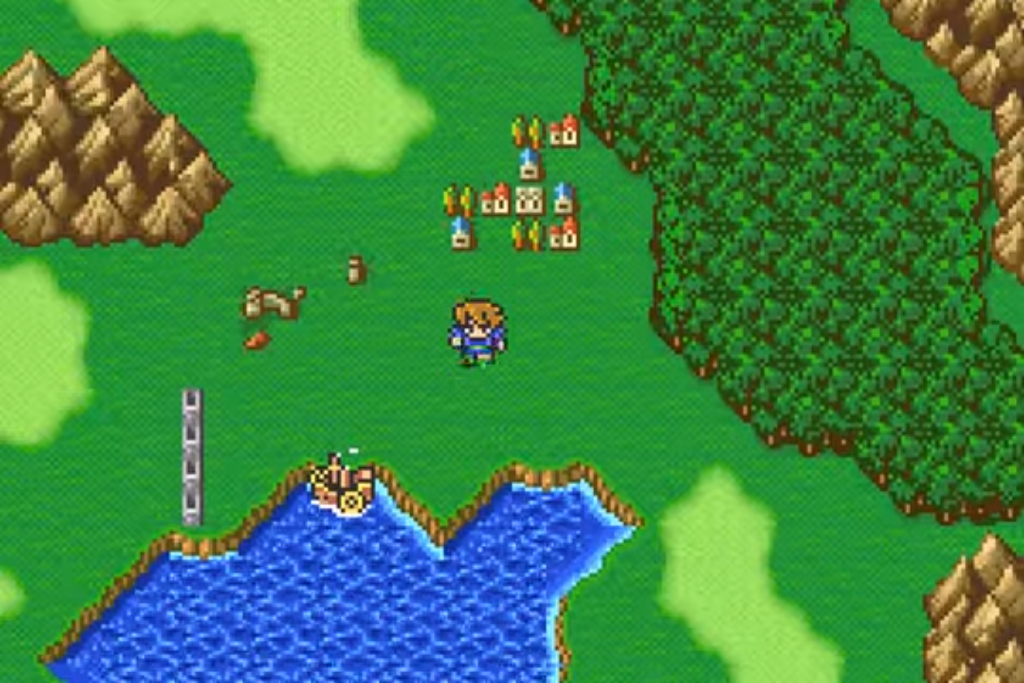 Final Fantasy V focuses very heavily on story. This playthrough took me over forty hours, the longest so far. The game focuses mainly on a young man named Bartz and his pet chocobo. Bartz witnesses the crash of a meteor in a nearby forest and decides to investigate. There he meets a strange old man who is seemingly suffering from amnesia. The two travel together to a nearby kingdom where their adventure begins. Throughout the game’s story, more heroes join the fold and team learns that a magical seal that has long kept an evil warrior at bane has been shattered. As one might imagine, there’s a lot more to it than that. Like all the other games in the series, the story should be experienced firsthand and not read, so I’ll stop here and suggest that you actually play the game to get the rest of the details.

One interesting element is that this game brings back is the Job System from FFIII. Throughout the game new jobs are unlocked and can be assigned to characters at will. Over time, skills from the job equipped can be permanently learned by that character. The original release of the game contained 22 jobs, while the GBA version has 26. 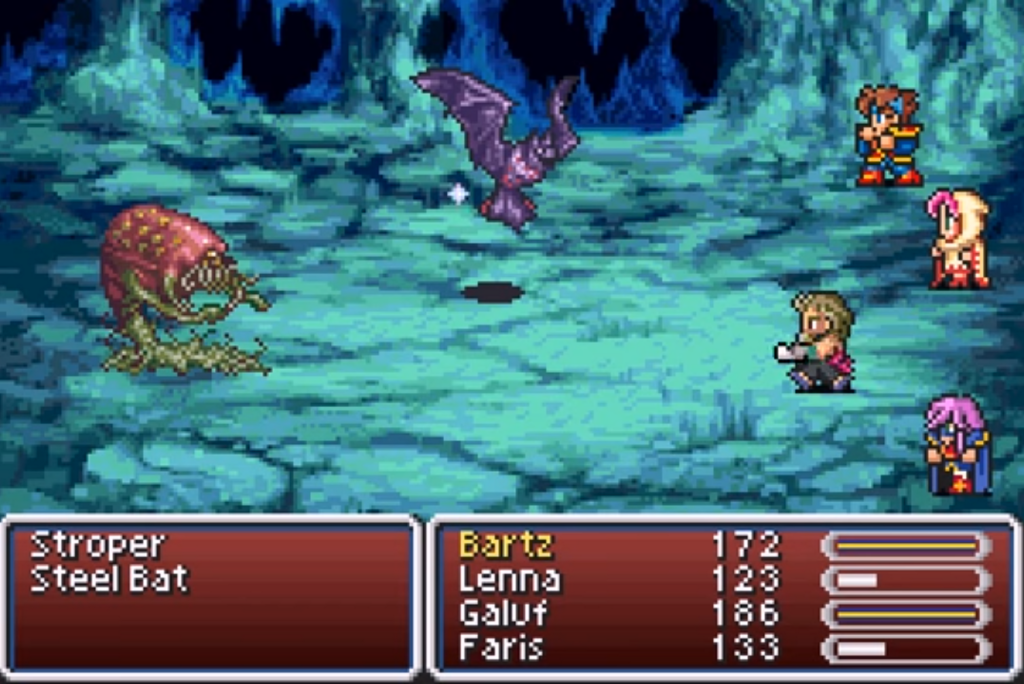 Graphically, the game is on par with FFIV. The GBA version does feature slightly smoother graphics, but nothing too noticeable. When it comes to music, the game has some very interesting pieces. Overall, the soundtrack is fitting and very well done, but I do feel it pales in comparison to the wonderful score of Final Fantasy IV.

With me, typically, my favorite part of playing a Final Fantasy game is the story and the atmosphere. This game, is an odd exception. My favorite part about FFV is actually the gameplay. The Job System is very well done and lots of fun. Grinding away to unlock abilities might be part of what made my playthrough so long. The storyline of FFV is great, don’t misunderstand. There’s plenty of twists and turns to keep you interested, but overall, it is probably my least favorite in the series. Many people may disagree, but that’s just my opinion. It’s hard to follow up a game like Final Fantasy IV, and I feel like it shows with this title. 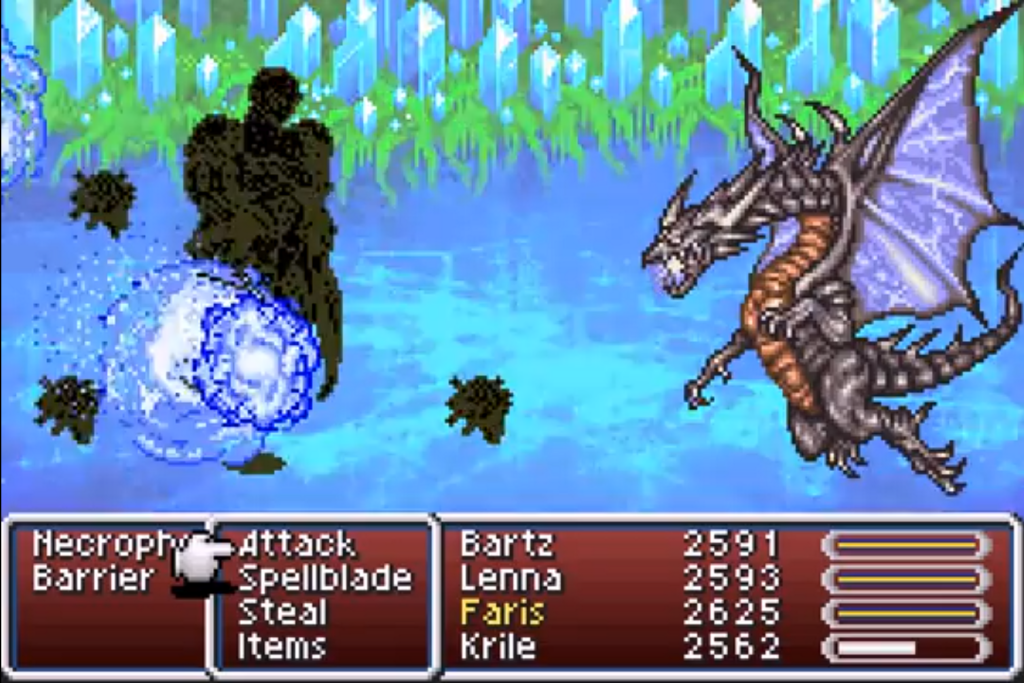 Difficulty: Medium  – The same rules apply here as with the rest of the series, patience is key. Mastering the Job System is the trick to the whole game. In today’s world of digital hand-holding, I wonder how that will sit with many younger players. For this reason, I feel that FFV is a little harder than other entries in the early series. But still, overall much easier to master than some of the twitchy platformers of the 16-bit era.

Story: Final Fantasy V features a very rich and detailed story. It’s excellent, but just not as good as I expected. Don’t get me wrong, even the worst Final Fantasy storyline beats most other RPGs hands down. It just didn’t light the same fire in me as other titles in the series. Regardless, the game does have some very memorable characters. Lenna always puts a smile on my face.

Originality: A lot of this game is borrowed from other titles, and that’s ok. The job system is revamped enough from FFIII to seem original. But other elements of the game do tend to fall into the “standard Final Fantasy experience”.

Soundtrack: Good score, but not great. Not my favorite that’s for sure.

Fun: As I stated earlier, the job system can be a lot of fun even if the rest of the game drags a bit. I did enjoy my time playing the game, but I felt like it was a little too long

Graphics: The graphics are about what you’d expect. The GBA provide a nice little boost and of course the iOS version is beautiful. It’s a mixed bag depending on the version you’re playing. I do feel that the original developers could have been able to squeeze a little more “pretty” out of the game if they tried harder. But, the art is certainly acceptable.

Playcontrol: As with most RPGs, control is not an issue. All works as it should.

Value: The GBA version is getting a little tough to find, even used copies are likely to run you $20-$30. The PSN release is available for typically under $15, but it’s not really the best version of the game.

Overall score (1-100): 75 – As I mentioned, FFV is a good game. If you’re a fan of the series, it’s certainly worthy of playing. Personally, I don’t feel it reflects the best the series has to offer. Even though it is currently out of print, if you can get your hands on the GBA version, this is the one I recommend. I’m keeping my fingers crossed for a more modern remake.