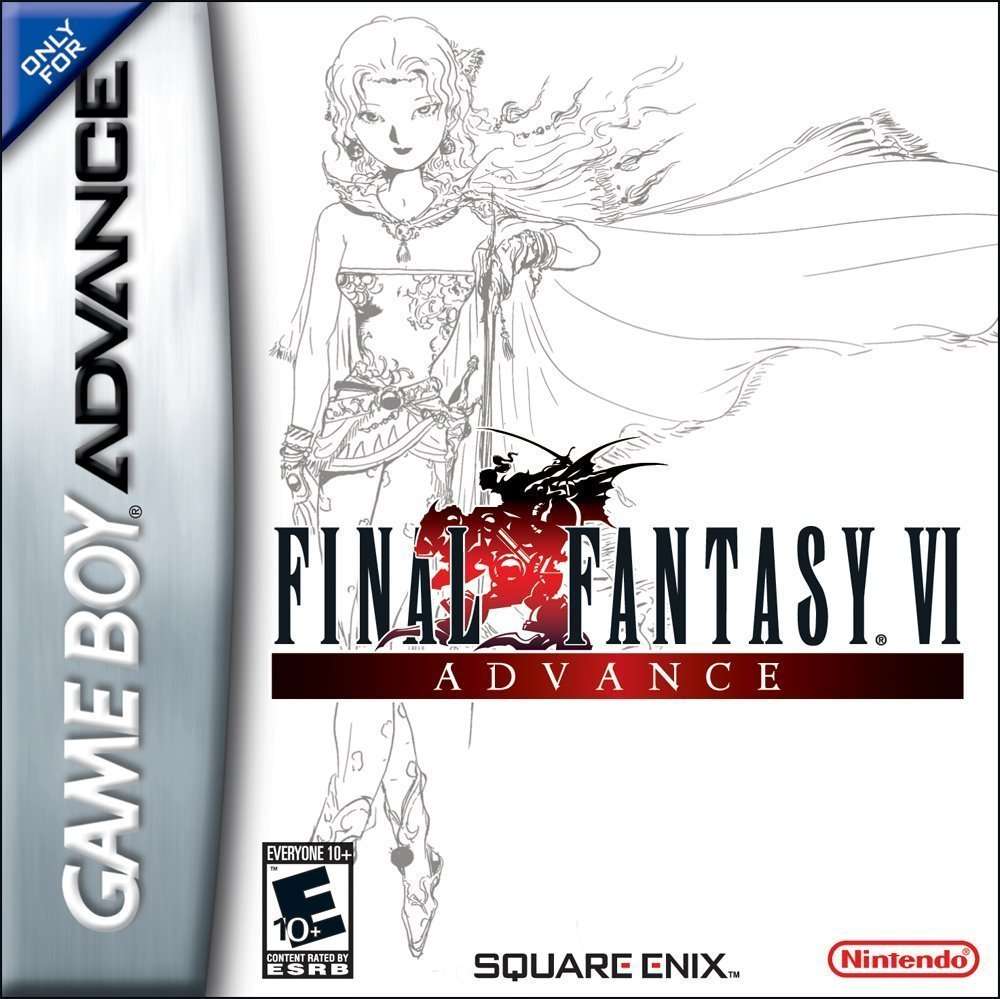 Here we are with the third and last Final Fantasy title in the 16-bit era, Final Fantasy VI. This game also marks the end of the “number confusion” debacle. Originally released in the US as “Final Fantasy 3“, this was the west’s second taste of 16-bit FF glory.

These days, there’s a few options for the people looking to play the game. The original FF3 version is available on the Wii virtual console. The Playstation Network sports another, better rendition of the game – complete with the correct title and an improved translation. However, the latest release is Final Fantasy VI Advance for the GBA. This version features updated visuals, an improved translation, as well as some additional content (spells, espers and optional dungeon). Having never played this version before, I chose the GBA version for this playthrough.

The game begins with two Imperial soldiers escorting a mysterious girl into a town. The three of them are piloting walking war-machines (aka Magi-Tech Armor). It is revealed that they have been sent to capture a frozen beast, known as an Esper, that was recently uncovered on the outskirts of town. The three of them encounter resistance from the locals and it is revealed that girl is under some sort of mind control. The Esper reacts to the attack and fights back, in the scuffle, the mind control over the girl is broken. But she is left suffering from a case of amnesia. She is taken in by a local who recruits her into a secret group of rebels. The story unfolds from here… 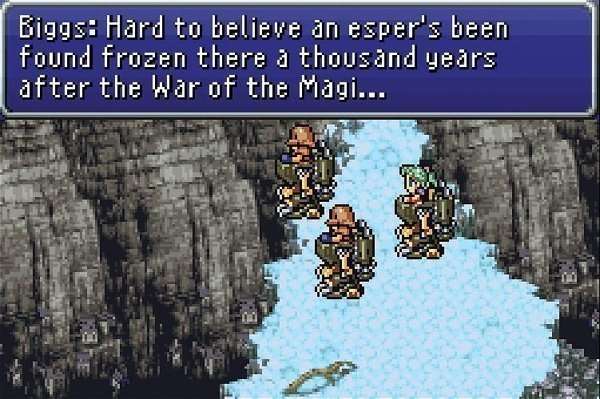 Like it’s predecessors, Final Fantasy VI features a lush and brilliantly crafted storyline. It is often considered to be one of the best in the series. The game features a cast of characters that are impossible to forget, each with their own background and personality. While this has become a staple of the series, it really shines here. This game also features one of the most sadistic and insane arch-villains in video game history. I’m not going to spoil anything, but even in the old days where Nintendo censored just about everything, the wartime tactics of Kefka were jaw-dropping.

As if the story wasn’t enough, it’s made even more potent due to the amazing game soundtrack. Again, I’m tempted to say it is also, best in the series. I’ve been told that some selections of the score are even taught in Japanese schools beside other classical music masterpieces. (I have no idea if that is true, but that’s what I’ve heard…) 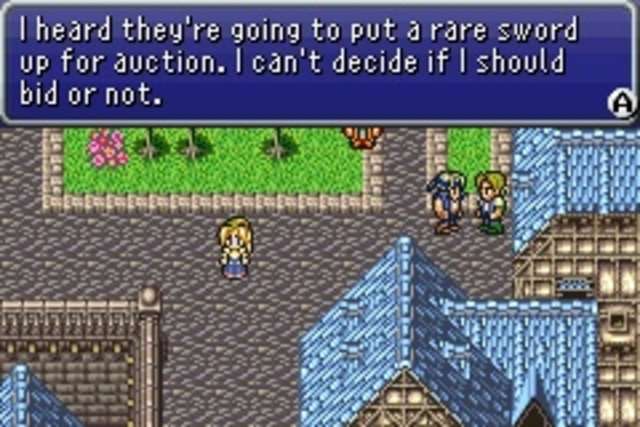 The graphics are certainly a step up from FFIV and FFV. They are slightly improved again in the GBA version. Detail on the character sprites are done pretty well, but most gorgeous art in the game comes from the scenery and monster design.

Much like Final Fantasy IV, there are no pre-set character jobs, but each character has their own role and set of skills. In early parts of the game, your hand is held a bit when it comes to party formation, but later on in the title you have the ability to create a group using the entire roster. This is where personal preference and deep understanding of each character and their abilities really shines.

Having played this time a number of times over the years, I was excited to see what changes the GBA version brought. There are four new Espers available to Terra as wells a several spells and a new dungeon. The dungeon features an optional and ultimate boss, the Kaiser Dragon. This boss is legendary among fans because it was discovered to have been coded into the original game, but there was no way to encounter it. Apparently cut out of the title at the last minute, it is finally available for those wanting a real challenge. 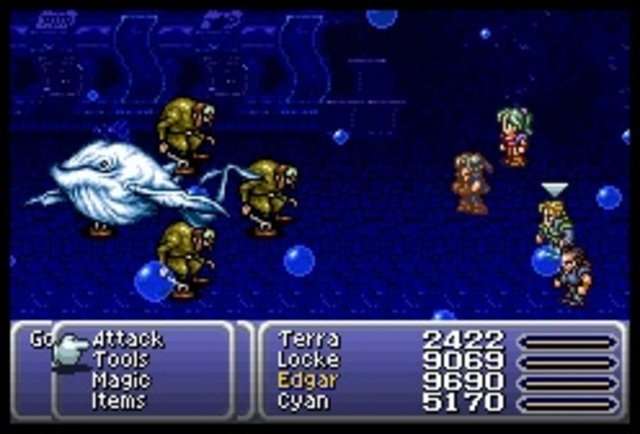 Difficulty: Medium  – This game is on par with the rest of the series. The patient will survive. Players can grind their way to ease if they really feel so inclined. But the real trick to the game is learning each character and their abilities and then applying them to overcome obstacles. The new optional content in the GBA is quite difficult and is really included for veteran players.

Story: Final Fantasy VI features what can arguably be called one of the greatest RPG storylines of all time, and I’m not exaggerating. It’s that good. My summary above covers about the first five minutes of the game, if I were to try to summarize this entire plot, we’d be here for hours. And the kicker is, there’s never a dull moment. This was the title that showed the world why Final Fantasy would become synonymous with RPG genre as a whole.

Originality: In reality, there’s not a lot of new ideas brought to the table. Everything in this title, storyline aside, has been seen elsewhere in the series. However, the biggest difference here is that everything has now been polished to perfection.

Soundtrack: One of Uematsu’s best works, and arguably one of the best game soundtracks to date. I literally have three different version of the game soundtrack in my personal library. Everything about the music in this game is sheer perfection. It’s truly art.

Fun: This is one game that never leaves me disappointed. It’s very fun and addictive title. So much so that it is often the title I recommend to those looking for a starting point in the series. The story sucks you in and the gameplay makes sure you don’t let go until the very end.

Graphics: Again, an improvement of the previous entry in the series. This game pretty much set the bar for RPGs in terms of what to expect visually. As I mentioned above, the monster art and scenery are amazing. The Mystic Forest area of the game was, at it’s time, breathtaking.

Playcontrol: As with most RPGs, control is not an issue. All works as it should with one exception. The character Sabin features some special abilities that rely on fighting-style button combos to execute. While these are fairly easy to input on Nintendo style gamepads, I’ve found them to be a bit trickier on Sony hardware. Nothing major, but worthy of mention.

Value: Copies of the GBA version are getting difficult to find, so even used copies are likely to cost you a lot. The Anthology version is available on PSN for the price of about $10, but it suffers from slow load times and translation issues.

Overall score (1-100): 100 – For many players, myself included, this game *IS* Final Fantasy. I am a fan of the entire series, but for me, VI represents everything that made the series great. The storyline, the music, the art – it’s all here. If you are looking to escape reality, or if you’re curious what all the hype is about, this is the game to play.