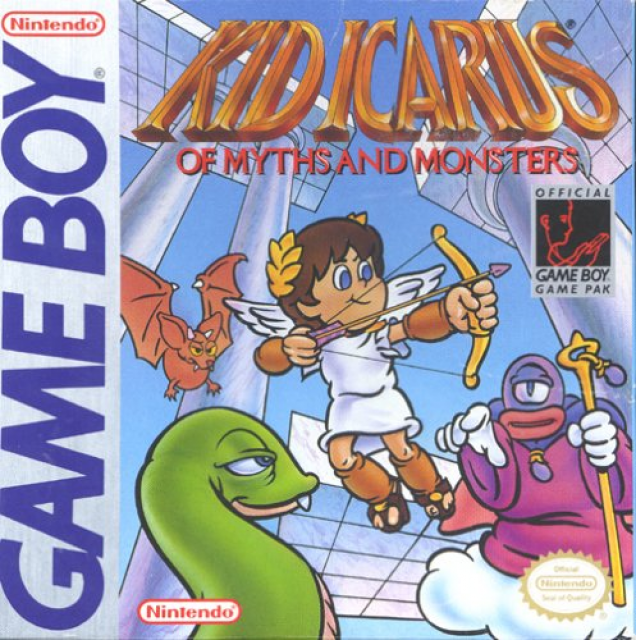 I’ve had the last few days off of work so I’ve taken advantage of this time to knock out a few of the shorter games on my to-do list. One of them being another classic that I somehow missed out on the first time around, Kid Icarus: of Myths and Monsters.

This game is a sequel to the original Kid Icarus, but was lost in obscurity for reasons that I can’t understand. The title received pretty good reviews at release but I never once saw a copy of it for sale or knew anyone who actually owned it. Recently, the game was released a digital download for the Nintendo 3DS and I finally got a chance to play it for the first time.

As expected, this game is a direct sequel to the original Kid Icarus. Here we have the goddess Palutena receiving a vision that Angel Land will soon be invaded by a powerful demon. In preparation for this, she commands Pit to undertake training. Most of the game consists of Pit working his way thru the trials, but climaxes when the demon invasion actually happens. Much like the original game, the last level sees Pit equipped with the sacred treasures so he may do battle with the demon Orcos. 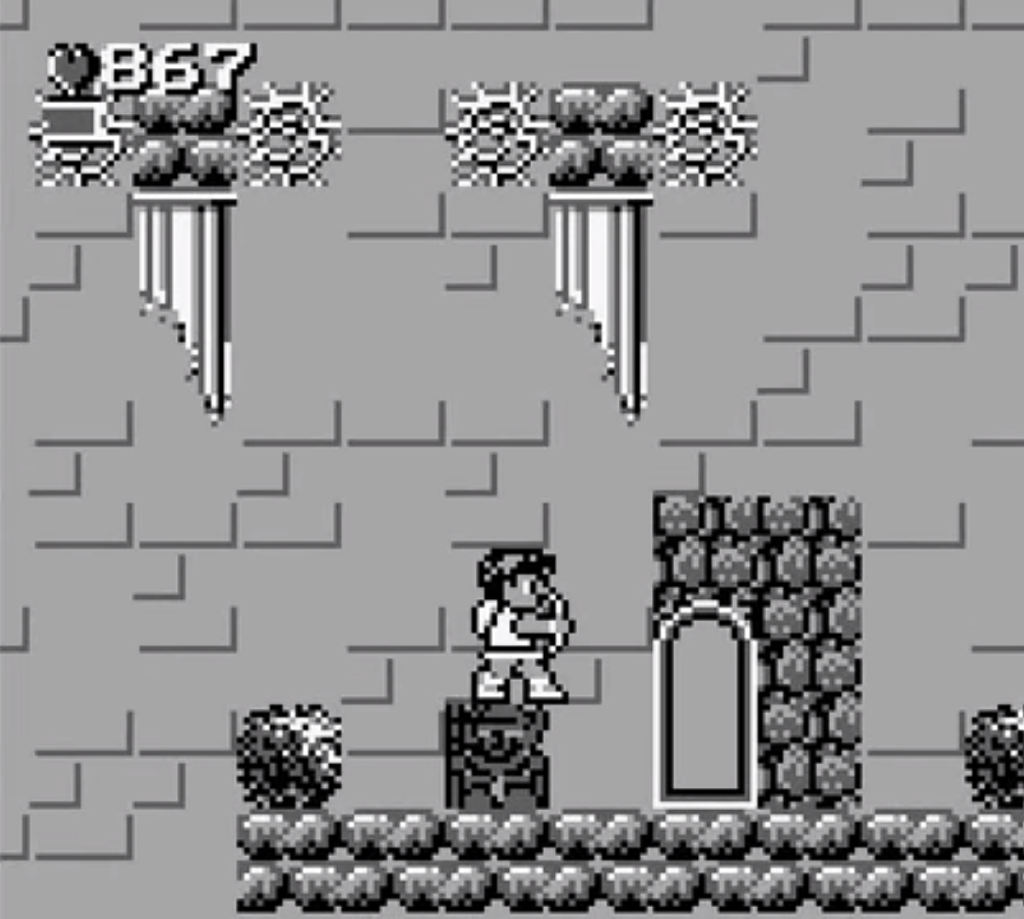 The game features play that is very similar to the NES original. However, there are a few very welcome changes. First of all, the levels are free-roaming. Meaning you can go up, down, left, right and back again. The original game did not allow any backtracking at all.  Also, the difficulty in this title has been lowered a bit. So while it is still challenging at times, it’s not nearly as frustrating as the original.  The password system is also gone, now your progress is saved at the end of each level.

Players of the original Kid Icarus will certainly feel at home with the environment here, but there is also enough new about the game so that it does not feel like a re-hash or a cheap port. 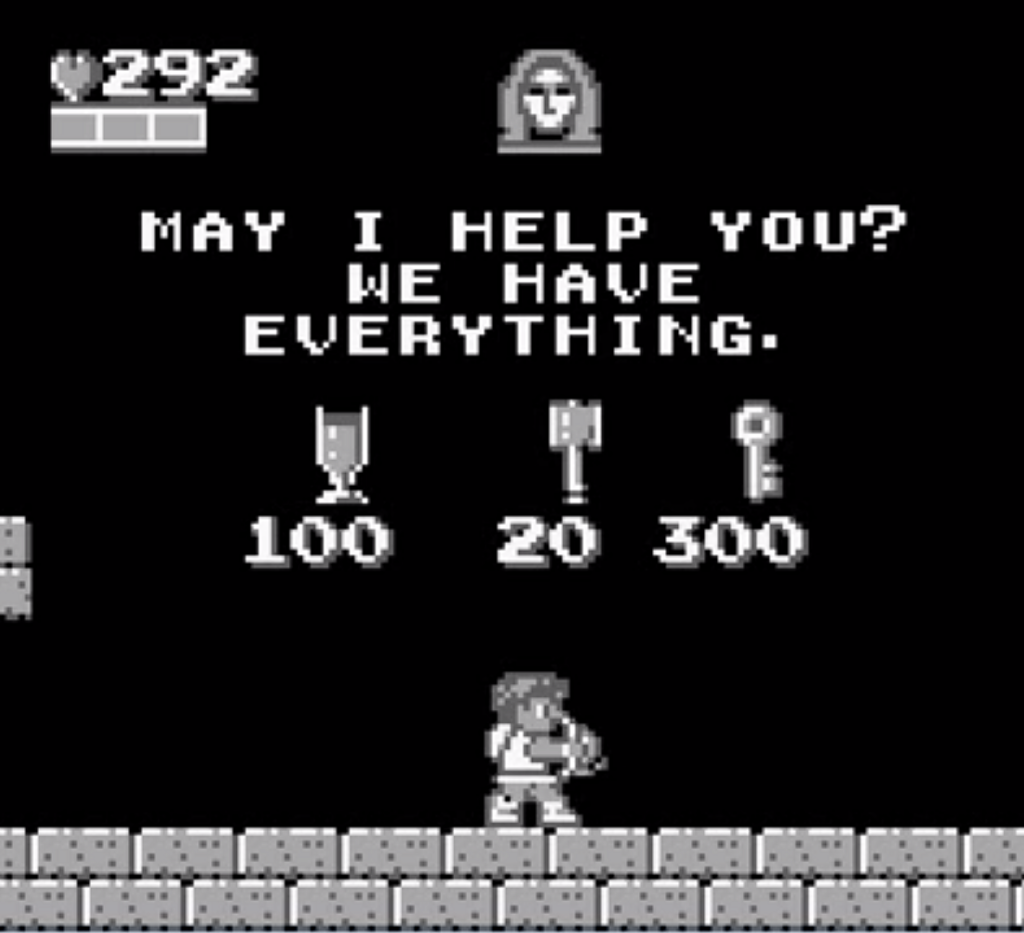 Overall, I feel that the game is actually a bit of an improvement over the first, but it does seem to lack some of the charm of the original Kid Icarus title. I think perhaps, if this game has been presented in a color 8-bit format, it would have better represented that original Kid Icarus vibe.

In the end, this isn’t going to be a game that’s for everyone. But it is a fun little time-waster. Fans of the original game are much more likely to get something out of this title than someone who picks it up randomly. 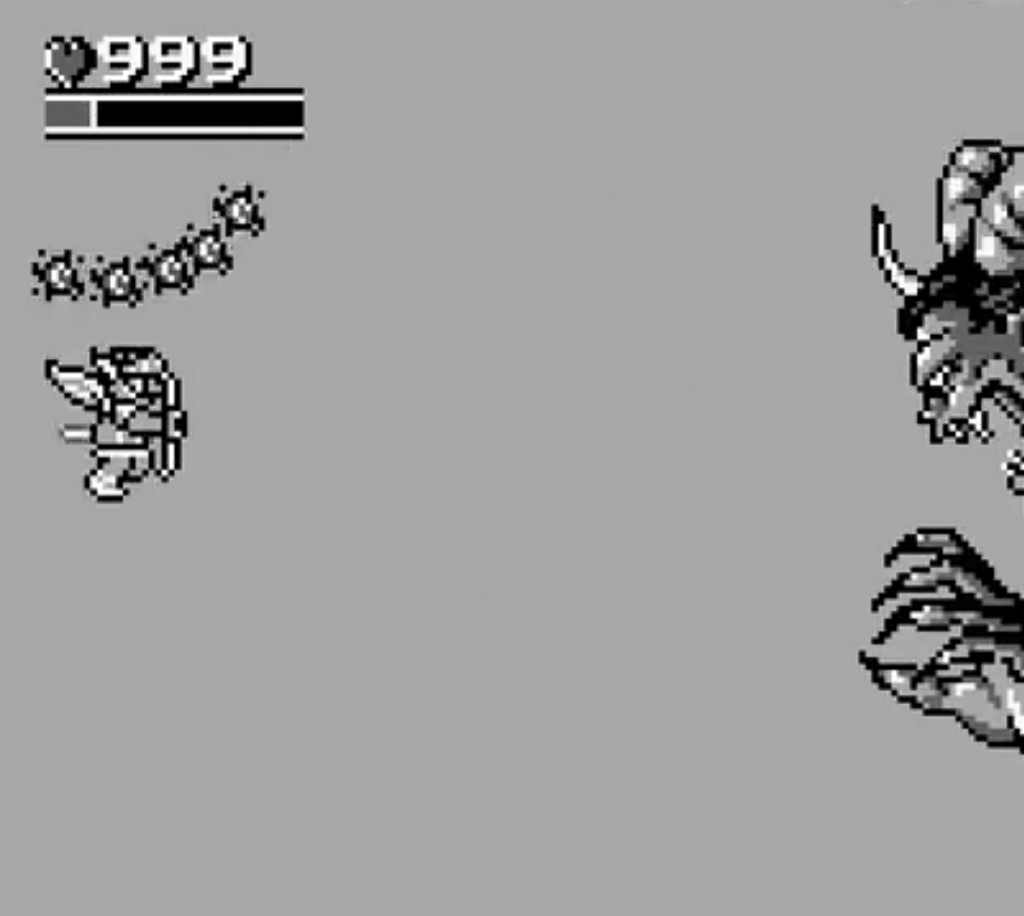 Difficulty: Medium  –  This game is much easier that the original, but it still has a bit of challenge at times. Players who mastered the NES game or have a lot of experience with platform titles should have no problem completing the game in a few hours.

Story: As with most action games of this era, the background story exists mostly in the instruction manual and a brief intro at the beginning of the game. While there’s no Medusa this time around, the demonic Orcos makes for a really great bad guy.

Originality: In many ways this game is a rehash of the original with a few welcome updates to the gameplay. This is a fine example of “improvement progression”.

Soundtrack: The music in this game is very similar in style to the original. So thematically, it’s well done. However, neither the original game nor this title have tunes that I found to be very enjoyable. The music is quirky and peppy, but somehow seems a bit out of place to me.

Fun: I actually enjoyed this game a lot more than I thought I would. It is very dated, but I feel that’s easily overlooked. It’s not near as frustrating as its counterpart.

Graphics: I feel the game suffers a bit here. This title was released in 1991, The Game Boy was two years old at this point and many developers had a good handle on things. The graphics are clear and not particularly bad, but overall it’s a bit uninspiring. There’s a few exceptions, some of the bosses are well drawn, and the final boss is pretty cool looking. But most of the trash enemies seem poorly rendered. Same for the background scenes.

Playcontrol: This game controls quite well for a portable title. Motions seem quick and smooth. An improvement over the NES game.

Value:  This game is available on the 3DS eShop for only $6.00. A great price for a game with this much content.

Overall score (1-100): 70 – Myths and Monsters is a good game, but it doesn’t really bring anything new to the table and there are many other similar games that seem to be more entertaining. I feel that it is a step in the right direction for the franchise, but it would be many years until fans would receive another game in the series. The game suffers a bit graphically and the soundtrack leaves a lot to be desired.

Available today on:  Currently Unavailable – (Updated as of Spring 2022)