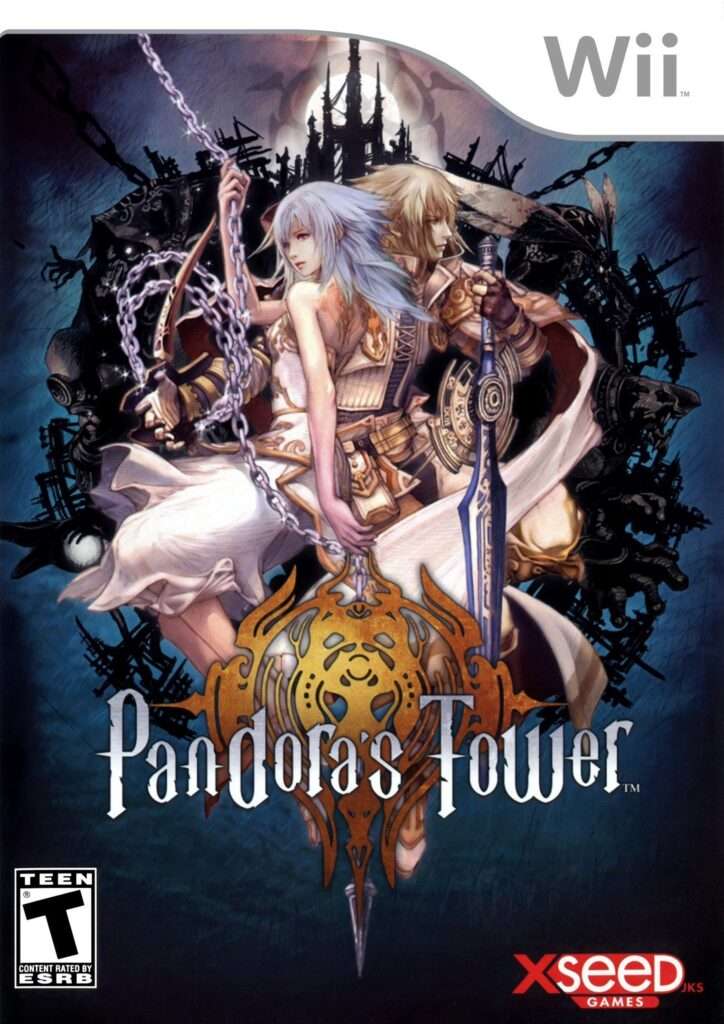 With my summer vacation swiftly coming to an end, I was able to finish the final game from the infamous Operation Rainfall campaign, Pandora’s Tower. The release of this game represents the third and final victory from the campaign. Thanks to the hard work of all those involved in Op Rainfall as well as passionate gamers all over the country, US gamers were finally given an opportunity to play this title without having to resort to piracy or importing expensive copies from overseas.

Of the three games involved in Operation Rainfall, Pandora’s Tower is the most unique. It’s much more action oriented than either Xenoblade or The Last Story. While there are many RPG style elements in this title, it features very fast paced action and even a bit of platforming.

The set up for the game is very original. In this title, you play the hero Aeron. The game begins when Aeron and his girlfriend, Elena flee for their lives from the nearby Kingdom of Elyria. Along with a very strange and mysterious old woman, Aeron and Elena take refuge in an abandoned observatory in the wasteland that overlooks a huge rift in the landscape known as the scar. In the center of the scar lies an ancient fortress called The Thirteen Towers. It is learned that Elena has become afflicted with a terrible curse. She is doomed to be transformed into a monster unless Aeron can find a way to break the curse. For time being, the effects of the curse can be abated, but only with the continual eating of monster flesh. To ultimately break the curse, Aeron must bring back the flesh of twelve Master Beasts. The flesh can only be acquired by defeating the monsters with a weapon given to him by Mavda, The Orcalos Chain. 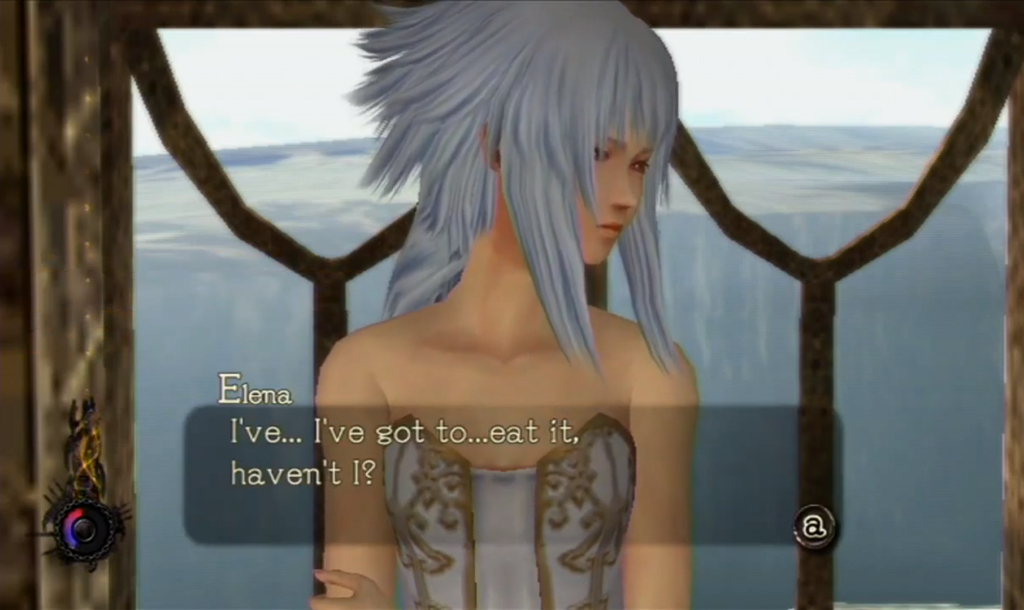 The game is broken in to two parts. First, is the exploration of the towers. It is here where Aeron must defeat monsters, collect flesh, and solve puzzles. The ultimate goal is to defeat the Master that is locked away in each of the towers. The trick is that your time in the towers are short due to a meter that continuously counts down. When it runs out, Elena is transformed into a monster and the game is over.

The second part of the game consists of Aeron’s time at the Observatory. It is here that he interacts with Elena and Mavda. Aside from ensuring she has a ready supply of flesh to eat, you can chat with her and give her gifts. This raises your affinity with her (which is crucial to the game’s outcome and storyline). Also in the Observatory, you can interact with Mavda who will pay Aeron for treasures and information he uncovers during his exploration. You can also purchase and craft/upgrade goods from her as well.

The game has some really wonderful concepts and I found it to be a full of very fresh ideas, but I was a bit disappointed with the execution. Combat in the game involved either standard close-quarters hand-to-hand fighting, or long distance attacks using the chain. The latter is accomplished by pointing the Wii remote on screen to target enemies. This annoys me to no end. I find it somewhat uncomfortable to play with one hand extended out in this manner. I guess it wouldn’t be so bad if all you had to do was point and target, but once you’ve snagged an enemy, you have to then shake or pull the Wii Remote to do damage.  Despite the fatigue, I found targeting with the remote very accurate compared with other games that use this type of interaction method. 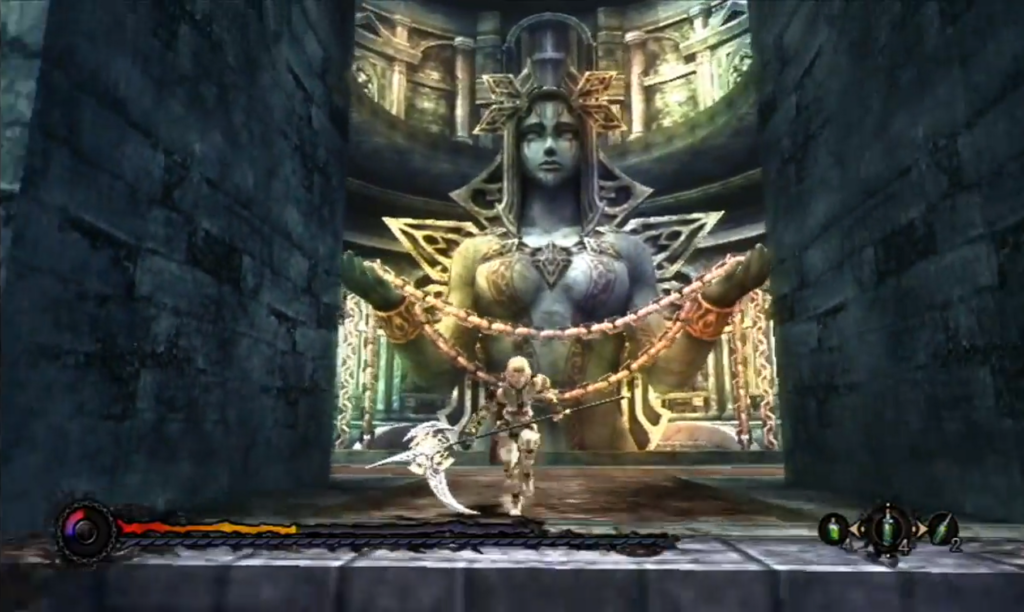 Visually, the game is well done. The graphics are superb for a Wii game and the soundtrack is quite good as well. The music is fitting but it’s not very diverse. It does get old after a while.

Of all the games involved in the original plan for Operation Rainfall, I can say this title is easily my least favorite. There’s some really neat concepts in Pandora’s Tower and the storyline and visuals are unique and first-rate. But the gameplay mechanics are not something I was really able to enjoy. Aside from the point and target annoyances, I found the timer to be a bit of a drag. Yes, I think that story-wise, it is a great idea. But I love exploring and the towers just beg to be seen. But sadly, I often found myself rushing through areas so as not to waste time.

Another issue which is worthy of mention, is the infamous endgame bug. The game has a terrible glitch in it that can freeze the Wii as well as make the game “unfinishable”. Essentially, sometimes, for unknown reasons, when entering the 11th and 12th towers, the game will get stuck on the loading screen indefinitely. Even powering off the Wii and restoring your save and trying again will result in the same behavior. Fortunately, there are quite a few workarounds for this issue which can be found all over the internet. However, this is a pretty glaring bug that should be addressed. It seems that XSeed has decided to turn a deaf ear to player complains regarding this issue.

Fans of the action RPG genre are most likely to find this game favorable. But for more casual players, I think this one will prove to be more frustrating that enjoyable. 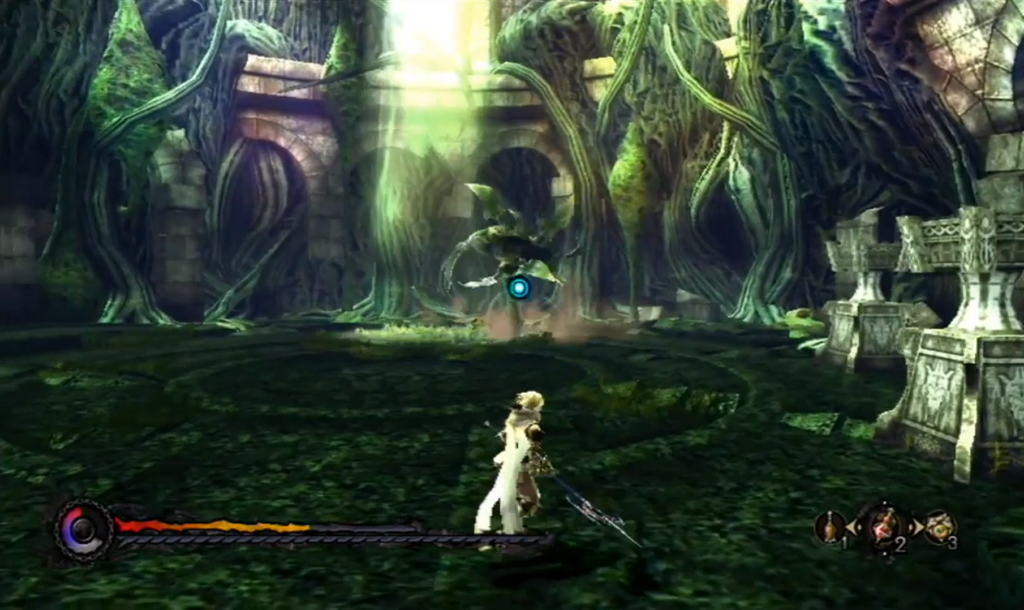 Difficulty: Difficult –  Personally, I found this game to be a little tough. Not so much because of the challenging puzzle or battles (although some of these can be quite tricky). But mostly due to the odd gameplay mechanics. The need for a lot of “point and click” solutions with the Wii Remote combined with the fact that the game uses a fixed camera, that you cannot control, make things difficult. Often times you are required to target a certain area, only to find that area un-targetable thanks to the terrible camera system.

Story: As far as story goes, this game does an amazing job. The story is very unique and it continues throughout the game in the form of cutscenes at the observatory as well as through hints and items found through normal gameplay. The storyline is really the saving grace of the whole game in my opinion. There are multiple endings, and each is worth viewing.

Originality: Despite what I feel is a rather poor execution, this game has loads of original ideas. It’s much more than your standard damsel-in-distress situation. The curse on Elena really brings a new level of depth to the both characters. The in-game timer add a sense of urgency not found in many modern games. And, although flawed, the controls really take full advantage of the Wii’s unique features.

Soundtrack: I found the music to be very fitting but a bit repetitive at times. It has a very gothic and classical feel to really meshes well with the environment of the towers. Oddly enough there’s no official soundtrack available for purchase.

Fun: I got most of my enjoyment in the game from interacting with Elena and exploring the towers. The combat mechanics frustrated me a bit as did the timer. These two mechanics alone made me glad the game was over when  I finally finished it. I don’t see myself getting the urge to play this one again any time soon.

Graphics: The game is beautiful. But if you really look close, it’s not all that well done. There’s not as much detail in the textures as several other late-cycle Wii games. But this is really hidden with great lighting effects and a diverse use of color. The graphics do seem to have a bit more jaggies than many other modern games, but this is forgivable. Each tower has its own unique theme and I found the majority of the game to be very lush and exciting.

Playcontrol: This where I feel the game suffers most. Annoying point and click mechanics combined with a fixed camera really ruined what could have been a groundbreaking game for me. More than once, there will be a shining object in the game that requires you to target it with the remote only to find the item out of range thanks to the camera. Then while trying to readjust your character to make the camera swing around, you end up stumbling off a ledge or wandering too close to a monster. That really sucks.

Value:  This game retails for a premium price. Personally, due to my issues with this game I find it hard to recommend it for this much money. I also don’t see the pricing dropping at any point considering the limited release this game has.

Overall score (1-100): 60 – For everything that Pandora’s Tower does right, there’s just as much about it that feels broken. Bad camera design and gameplay mechanics combined with a terrible endgame glitch really taint what should be a near perfect demonstration of the what Wii is capable of as a system. I feel that lovers of RPGs and fantasy games may enjoy a lot of what the title has to offer, but be prepared for a little suffering along the way.

Available today on:  Not currently available – (Updated as of Spring 2022)