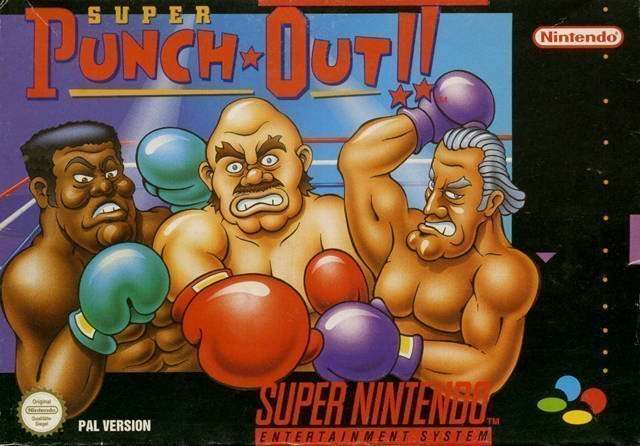 After a several weeks of intense SNES RPG action, I decided to take a step back and relax with something a bit simpler. I was browsing thru my Virtual Console library and came across a game that I purchased a couple years ago, but never actually played. That’s right, Super Punch-Out! is a classic SNES title, but one that I never experienced in my youth. So this review is based on my first playthrough ever of the title.

Now, while I never played the Super Punch-Out! in my younger days, I was a rabid fan of the original. I consider myself to a Veteran Punch-Out! Player. I figured my experiences with Punch-Out! would have me somewhat prepared for this game, but I found that not to be the case.

Super Punch-Out! is a direct sequel, and in many ways is similar to the original. You play as Little Mac (although he looks a bit different in this game), there is a cast of colorful opponents – each with their own quirks and strategy, but the feel of the game is very different. 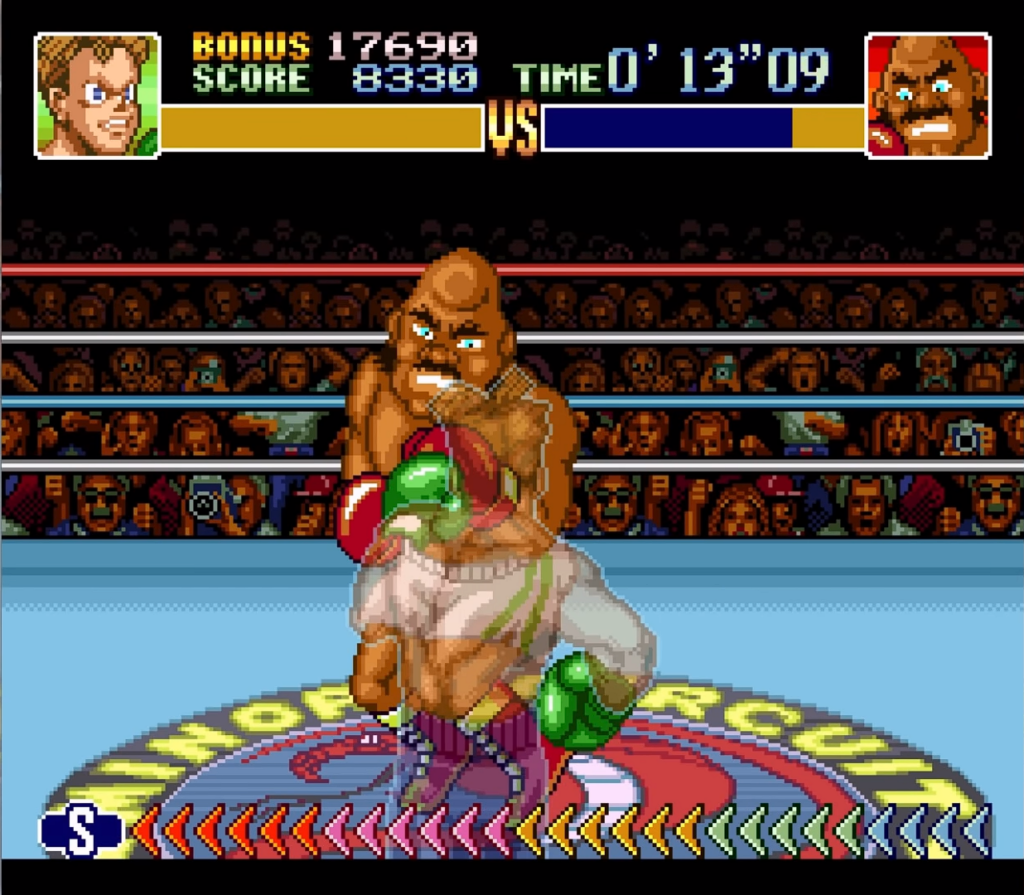 First of all, instead of three one-minute rounds, we now have one three-minute round. This makes the fights feel a little longer and also keeps the momentum going. But at the same time, it makes it harder to escape from a bad situation. There’s no breaks and no rest between beatings. Also, the controls work quite a bit differently. Blocking and dodging is not as simplistic as it was in Punch-Out!

The first time I played the game, I got my ass handed to me on the second fighter, Bear Hugger. Even more so on the following fight. The game controls felt a bit sluggish to me, when compared to the original. Keeping in mind that these are two different games, I took a moment to regroup and re-analyze the situation. Eventually, I was able to get a feel for the way things work in this game and I started to get better. 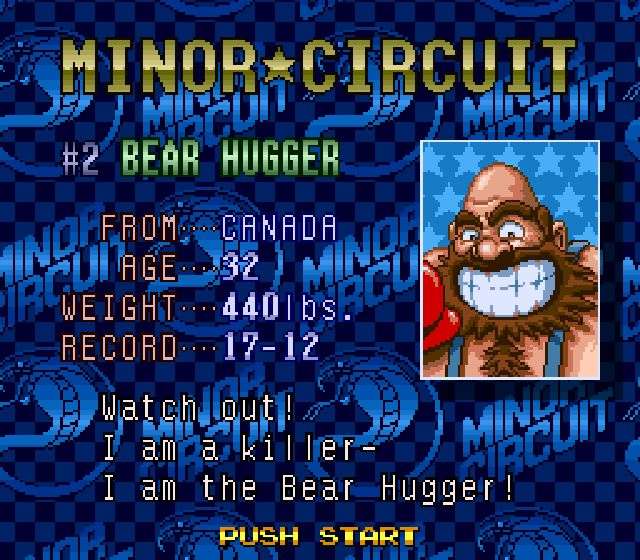 The best part of the game is the cast of colorful boxers. A handful of characters from the first game also make an appearance here, but there’s a whole new slew of comical opponents.  The 16-bit graphics also prove to be a plus here, as the characters have much more detail and there’s even some short bits of recorded speech thrown in here and there (which at the time was really something special).

There are three standard circuits that you can progress through during the game. However, if you manage to complete all three with zero losses, you unlock a special secret circuit that features some really challenging fights.

For those that are unaware, the Punch-Out! games actually debuted in the 80’s as arcade machines. When Mike Tyson’s Punch-Out! was released on the NES, it was very different from the arcade titles. This game sort of restores the looks and feel of the arcade versions. But I’m not really sure if I like it. I found Super Punch-Out! to be entertaining, but nothing really memorable. 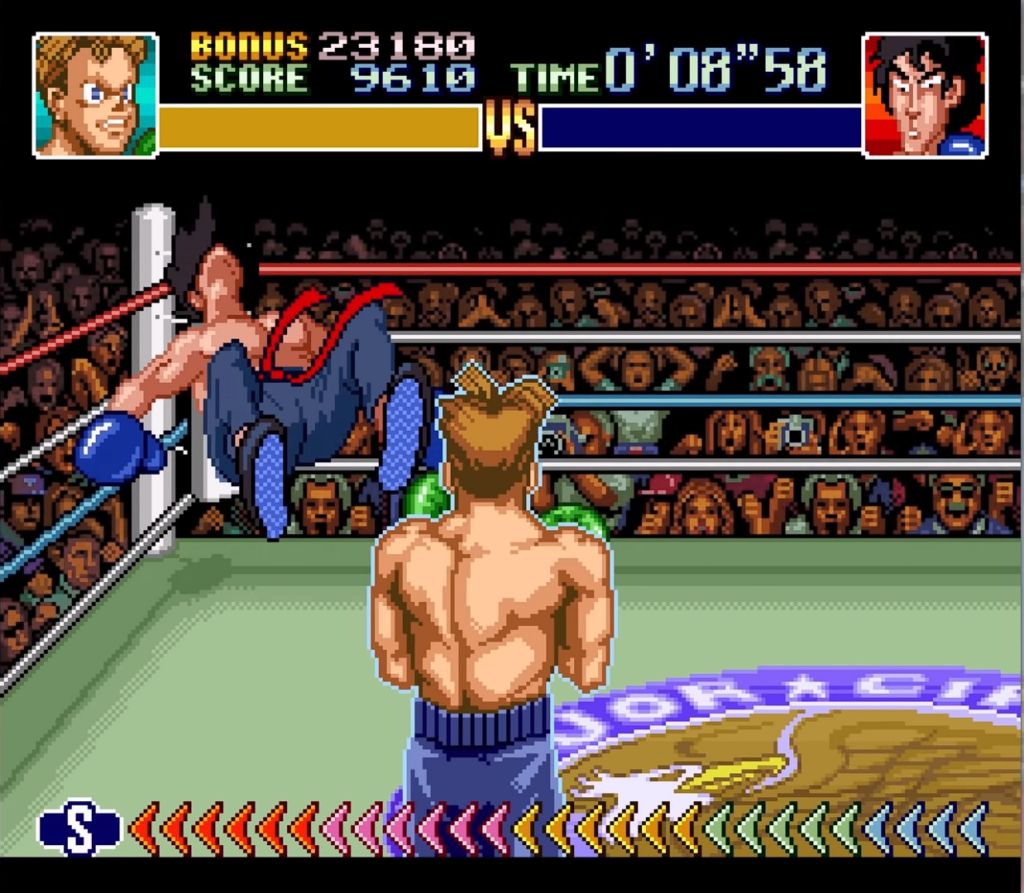 Difficulty: Hard  – I found this game to be a bit tougher than the original title, and overall to be a pretty good challenge. It starts off easy, but the difficulty increases with each new fight. The secret matches are really rough. The game can be pretty frustrating early on, but once you get the hang of things, it does get a bit easier to deal with. Each boxer has their own strategy.

Story: There’s really not much to say here. It’s a comical boxing sim. It is what it is. It doesn’t really need much of a plot.

Originality: A lot of concepts in this game are carried over from the arcade titles and the original NES game. However, it manages to stay fresh enough that it doesn’t feel recycled.

Soundtrack: The in-game music is fitting, but not particularly memorable. Not good, not bad.

Fun: For those who enjoy silly characters and like a challenge, this game can be quite fun. Some younger players or inexperienced gamers may quickly be frustrated.

Graphics: The art work is colorful and very well done. It’s a vast improvement over the original game. This time around, we have a semi-transparent Mac. This is made possible due to the graphic capability of the SNES. Little Mac is all grown up!

Playcontrol: Players expecting a play-feel similar to the NES Punch-Out! will be in for a surprise. This game has it’s own feel. But once you get the hang of it, it’s easy to handle. The controls are responsive and I did not experience any lag or playcontrol frustrations.

Value: This game is available digitally on the Wii Virtual Console for under $10. For this price, it’s worth it.

Overall score (1-100): 65 – Super Punch-Out! is not a bad game. But it’s not an especially good game either. It suffers a bit by standing in the shadow of it’s predecessor. The characters are entertaining and memorable, but the game itself was largely uninspiring. For those who love first-party Nintendo titles, it’s certainly worth picking up digitally.

Other Review In This Series: